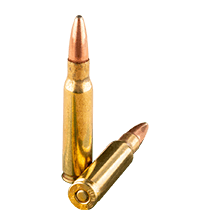 Live Inventory
The .308 Winchester is a great hunting round, suitable for most North American game, from deer to bear. It is also used in military, law enforcement and long-range target shooting applications with great success. To shop 308 ammo in bulk, check out our bulk 308 ammo page. Learn More
per page

The Beginning of the 308 Winchester

The .308 Winchester cartridge was designed for hunting. In fact, it is the most popular short action round for big-game hunting in the entire world. It is able to harvest most game in North America, as well as a large portion of game in Africa, due to the efficiency of the bullet in delivering hydrostatic shock to the target. This happens especially well when expanding bullets are used – the Nosler Partition bullets and the Sellier & Bellot eXergy are great examples of high-performance bullets engineered specifically for hunting.

In addition to the NATO 7.62x51mm, the 308 Winchester has served as a parent round for a variety of ammo. Some of the many cartridges developed using the .308 Winchester include:

Because it shoots with great accuracy and recoil is manageable, police and military shooters consider the .308 Winchester to be a valuable component in their arsenals. The round is versatile and has been employed effectively in urban situations, yet it still offers the ability to engage human targets at ranges as far as 1,000 yards. The bullet weights for the .308 Winchester cartridge range between 150 and 180 grains, and muzzle velocities are in the range of 2,600 to 2,800 feet per second, which provide 2,600 to 2,800 foot pounds of muzzle energy.

For large numbers of sport shooters, the .308 Winchester is their go-to cartridge. It's currently used by PALMA competitors in their 800-, 900- and 1,000-yard events. It is also used by F-Class shooters for competitions at 1,000 yards. The USPSA (United States Practical Shooting Association) has a Multi-Gun, Heavy Metal class with very specific firearms requirements, one of them being that the smallest caliber size be 0.308." As a result of this and due to the number of AR-15 style rifles chambered for this round, the most frequently chosen cartridge is the .308 Winchester.

Genesis of the .308 Winchester

The genesis of the 308 Winchester round lies back in 1952. At that time, there were two big kids on the block – the .30-03 and the .30-06. They were in such great supply, thanks to their use during half a century of wars that the average American knew how to shoot with them. The round was designed by Winchester for weapons with shorter action for more reliable functioning in semi-automatic rifles. It was originally tested by the military before the modifications, making it the 7.62x51mm NATO two years later.

These two rounds are so similar that many people think they’re interchangeable, but they’re not. While a 7.62x51mm NATO can physically be chambered into a weapon designed for a .308 Winchester (and vice versa), the pressure difference between the two rounds makes actually firing one from the other profoundly unsafe. The 308 is loaded at a much higher pressure than its military equivalent.

The 308 Winchester’s little brother started seeing far less action after the military switched away from the M16 to the far faster 5.56 round. After this, the .308 Win was primarily used as a sniper round in the Marine Corps, though it saw some use in the Army as well. By 1964, however, the round had all but disappeared from regular use in the United States military. It didn’t die out completely, however, seeing continued use as a long-range round. It’s primary use today is in specialty roles in the Marine Corps and competition shooting throughout the military.

Today, the 308 is one of the most readily available commercial rounds on the market – and that’s part of its appeal. Say, for example, you’re traveling and your bags get lost. Your ammo is gone. You won’t have any trouble at all replacing the rounds when you get to your destination. For preppers, this is a Godsend. You can easily load up as much as you need of this powerful big-game round without having to worry about where you’re going to get more – at least not until the end of the world as we know it.

The .308 Win also has a lot of variety within the cartridge in terms of bullet weight. You can buy light bullets if you’re dealing with varmints, but heavier bullets are what make the round the go-to cartridge for big-game hunters. Specially bonded bullets pierce animal bone and even bulletproof glass. Most stores will have the 308 Winchester with the bullet load you need to accomplish just about any task. If they don’t have what you need, it can generally be ordered and quickly delivered.

Handloaders love the round, thanks to this versatility. Stores, online retailers, and catalogs have just about everything you can think of – as well as things you’d never even considered if you want to start handloading your own .308 Winchester cartridges.

Development of .308 ammo has continued since its introduction over 60 years ago, and it remains one of the primary rifle cartridges offered by ammunition manufacturers when they develop a new product line. Sellier & Bellot sell .308 Winchester topped with their eXergy and Nosler Partition bullets. Federal Premium Ammunition sells .308 Winchester in their Fusion line of hunting ammo and with the Nosler Ballistic Tip. Hornady sells its new TAP ammo in .308 for tactical applications, and their A-MAX Match ammunition for competitive shooters.

This has been a popular cartridge for sport shooters, hunters, and shooters with tactical applications for decades, make it common to find cheap .308 ammo. It is extremely accurate, the recoil is manageable, and it has a variety of ammunition available. Ultimately, it is the versatility that has made it perhaps the most popular round in the entire world.

While it’s not the best at anything, it’s darn good at just about everything – especially for those who want to own one or two rifles, rather than turn their gun cabinet into a Swiss army knife. This can be the one rifle to rule them all.

When someone refers to .308 ammo (pronounced three-oh-eight), they’re referencing the .308 Winchester rifle cartridge. The round was released in 1952 for the Winchester Model 70 bolt action rifle and quickly became popular for hunting medium to large game. One of the United State’s most popular hunting rounds, the .308 Win is often used to hunt white-tailed deer, black bear, elk, and moose.

What caliber is a 308 Winchester?

The caliber (the technical term for a bullet’s diameter) of the .308 Winchester cartridge is .308-inch. This projectile sits in a rimless, bottlenecked casing and the total length of the round, projectile and all, is 2.800 inches.

What are the different types of 308 ammo?

There are a variety of .308 Win ammunition available today. Traditional full metal jacket (FMJ) cartridges are common, as are hollow point rounds, which are more likely to be used for hunting large game. Pointed soft-point (PSP) cartridges are also popular hunting rounds, as they offer greater accuracy over long distances. Specialty rounds, such as polymer-tipped and open tip match (OTM) ammo can also be found. Most .308 Win cartridges have brass or steel casings which house bullets that weigh between 100 and 200 grain (gr). Many shooters handload their own rounds.

What is the difference between 308 Winchester and 7.62 NATO?

While the .308 Win and the 7.62x51mm NATO cartridges look alike, the rounds are different and, according to the Sporting Arms and Ammunition Manufacturers’ Institute (SAAMI), not interchangeable. The .308 Win was released in 1952, two years before the US military adopted the 7.62 NATO. The two cartridges are loaded to different pressures, with the civilian .308 round at 62,000 pounds per square inch (psi), while the military 7.62 NATO is loaded to 50,000 copper units of pressure (CUP), which equates to an estimated 58,000 psi. There are also differences in the case thickness (with the 7.62 being thicker) and headspace (with the NATO being slightly larger).

The best .308 Win bullet weight depends on the shooter’s specific needs, including the environment they’re hunting in, the distance of their shots, and the game they’re trying to harvest. The most popular .308 Win rounds have bullet weights of 150 grain (gr), 165 gr, and 180 gr, both in commercial ammo and handloads and can all be used for hunting. Generally speaking, as the .308 bullet becomes heavier, it decreases in velocity and increases in muzzle energy.

What 308 ammo does the military use?

The US military does not use .308 Winchester ammunition. Instead, in 1954, the military adopted the 7.62x51mm NATO, a cartridge that was developed from the .308 Win, but has significant differences. The civilian round is loaded to a higher pressure than the military round, and the parent case features a smaller headspace and thinner casing than the NATO cartridge.

Charley W.I am very pleased with the products, and they actually arrived earlier than I was expecting.