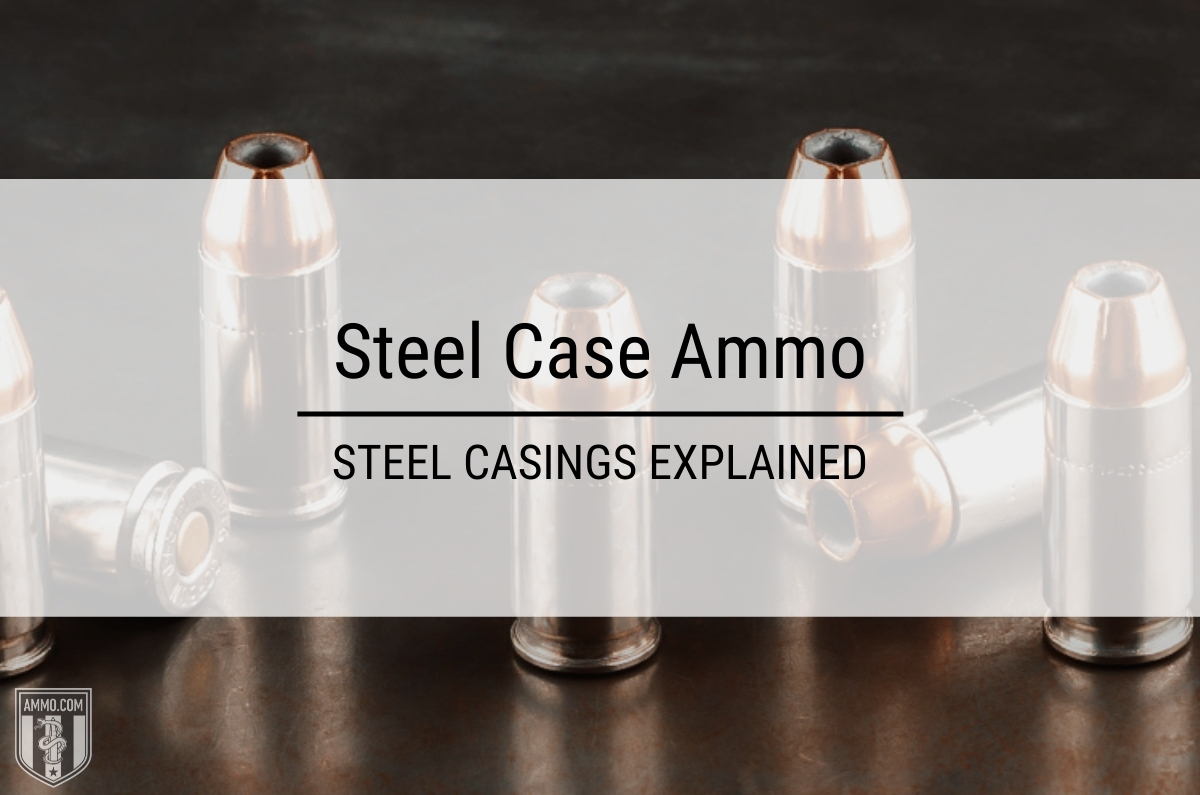 Steel-cased cartridges are an issue of hot debate – some even compare it to the 9mm versus .45 ACP ammo argument or Glock vs 1911. While it's great and versatile ammo, steel casings do have a bad reputation among some sportsman. However, not many problems occur today with steel-cased ammo (unless you’re pumping thousands of rounds each day or using cheap surplus military ammo from a foreign country).

Steel casings have long been manufactured outside of the U.S., with Wolf and Bear being the biggest suppliers. The domestic production makes this ammunition a cost-effective option, and makes it popular among target shooters and sportsmen all over the world.

Today, steel-cased bullets can be found in a variety of calibers. The most common are 7.62x39mm and steel-cased 9mm, but many other calibers are made with steel cases due to the cost effectiveness of steel vs. brass. Hornady is one of the most recent manufactures to introduce steel-cased ammo into their product line, which seems to be a success.

Steel casings are one of the most misunderstood cartridge components out there. People say they rust, they jam, they corrode your firearms, they misfire – but these are not true at all. Today’s steel casings are coated with a polymer, making them very smooth as well as corrosion and rust resistant.

You can still find older-style lacquered rounds that do have issues on occasion, but they are relatively hard to find. These sans-polymer rounds are still useable, but require good cleaning habits at the end of shooting sessions.

Enthusiasts who like to experiment with different ammo for fun can still find plenty of lacquered types from companies like Brown Bear if they want to try them out or get them cheap. Overall, you will be hard-pressed to see a noticeable difference between steel-cased ammo and brass-cased.

There are several specific myths surrounding steel-cased ammo that we will address right now. 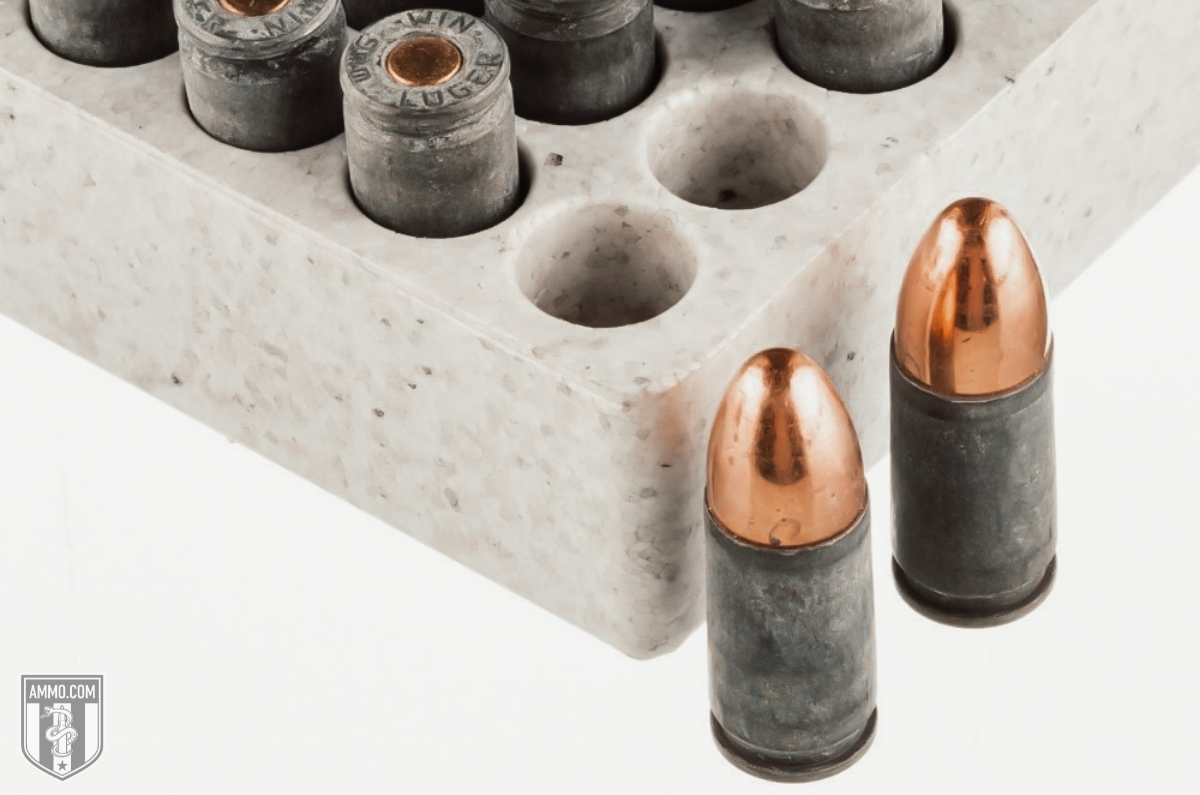 Any steel-cased ammo you buy from your local sporting goods store or Ammo.com is not bad for your gun and you should not be worried about using it. It's cheap ammo that allows you to practice with your AK-47, SKS, and AR-15 carbine for a lower cost per round.

For my handgun shooters, steel case ammo is perfectly fine to run through your Glocks, Smith and Wesson M&P, Springfield XD’s, or any modern firearm. Furthermore, 1911 shooters should not be concerned as the Allies used steel-cased 45 ACP ammo in their 1911’s during the later stages of WWII due to a brass ammo shortage.

There’s no reason you can’t shoot corrosive steel case 7.62x39mm or 7.62x54r ammo in your SKS, AK-47, or Mosin Nagant rifles. However, you must thoroughly clean the barrel, action, bolt or bolt carrier group (bcg), and chamber within a few hours of shooting corrosive ammo.

I would NOT recommend shooting corrosive ammo in an AR-15 as it will be nigh impossible to clean the gas system to prevent corrosion of the gas tube and the BCG.

However, there's more to it than tha...let me give you the long answer.

This question about the increased wear and tear on AR-15 carbines when using steel cases has been debated for years among gun owners.

Those are impressive numbers! 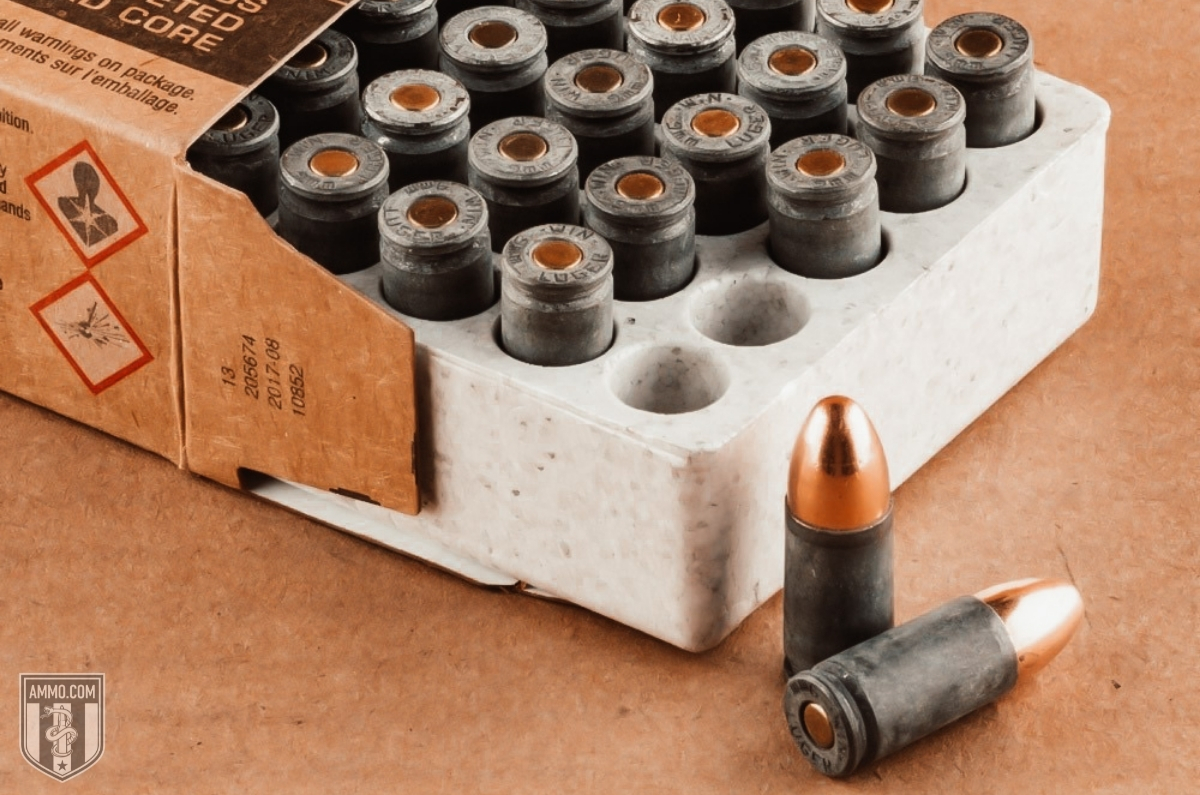 Tests have also shown that carbine-length barrels are shot out after about 4-5,000 rounds of steel-cased ammo – meaning that the barrel wear is so extreme it causes accuracy takes a nosedive off a cliff.

This is due to the bimetal fmj (full metal jacket) bullets that most all steel-cased ammo uses (Wolf, Tula, Brown Bear). A bimetal fmj is a copper washed steel jacketed lead core bullet. The steel jacket will cause more wear and tear on a barrel, damaging the lands and grooves of the barrel rifling.

Over time and many rounds, the lands and grooves will wear down, making less contact with the bullet when it's in the barrel. This causes less (or no) bullet spin and is the primary reason why accuracy suffers after so many rounds of cheap steel ammo.

By comparison, the barrel using exclusively Federal brass cased ammo still had acceptable accuracy after 10,000 rounds and did not need to be replaced.

Let’s be honest, most shooters will never put that volume of steel cartridges through their AR-15. However, if you do, you will need to get a new barrel and extractor sooner than you’d expect with brass-cased ammunition.

This might lead you to wonder, does the cost savings from shooting steel-case ammo outweigh the cost of a new barrel and extractor?

If you do consistently shoot steel-cased ammo out of your AR-15 you can offset the price of a new barrel and extractor with the cost-savings from the ammunition.

However, this means that you need to stay on top of your rifle maintenance a lot more than you would with brass-cased ammunition, and some shooters just don’t want to deal with that.

Will the Lacquer Coating Cause Problems? How about the Polymer-Coated cases?

There is no evidence that lacquer or polymer coating on steel case ammo causes any type of build up or extraction issues.

So then, why is it needed?

All the major Russian ammo manufacturers like Brown Bear, Silver Bear, Wolf and Tulammo will utilize such coatings.

There has been anecdotal talk on the Internet that the lacquer coating will melt off during long strings of semi-auto fire and cause a build up in the rifle’s chamber (potentially making the chamber sticky and causing failures to extract); however, this isn’t actually in agreeance with reality.

Compared to brass ammo, you’ll pay less for steel case ammo almost every time. This can add up if you spend a lot of time on the range.

For high volume shooters, the reduced cost of cheap steel ammo can really add up over several years and easily offset the cost of replacing a barrel and/or extractor.

Steel-cased cartridges can be coated in lacquer or polymer. These materials are very resistant to rust and offer more corrosion resistance than steel alone.

This makes steel case ammo more ideal for long term storage if you are a prepper. 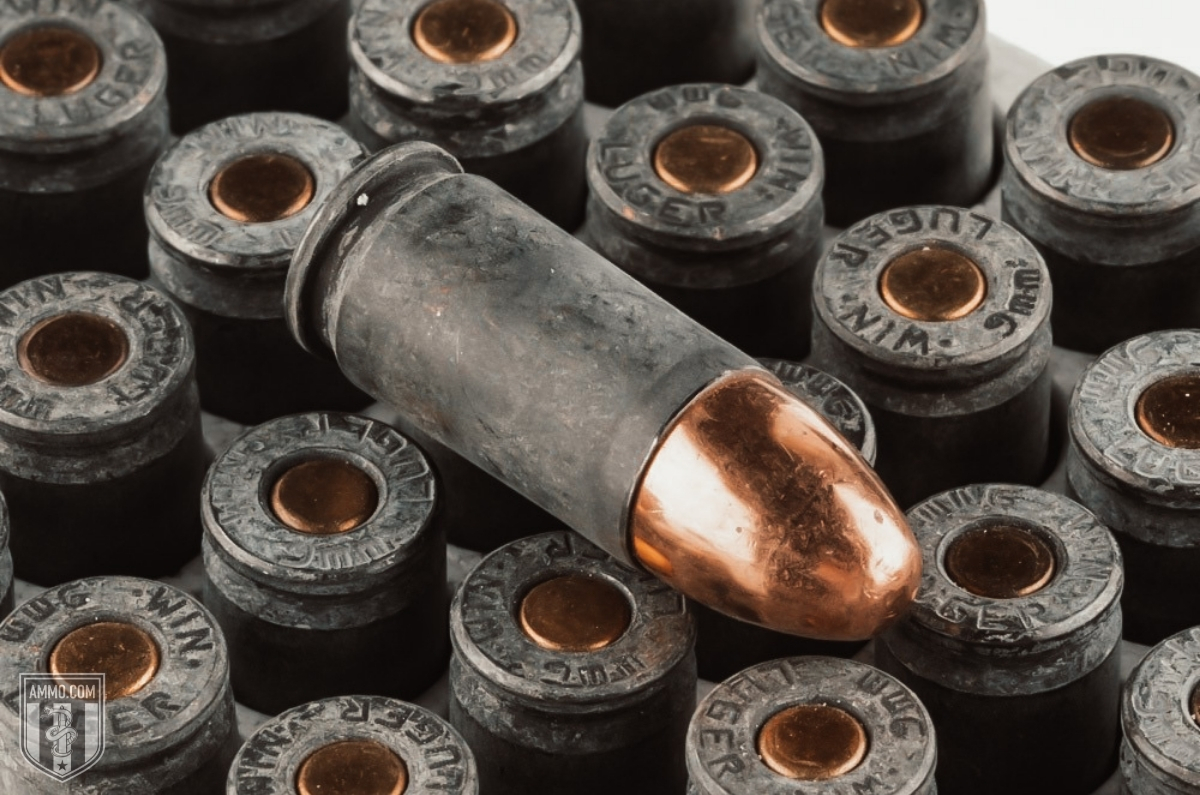 Don’t like crawling around or stooping constantly to pick up your spent casings? A telescoping magnet or something equivalent will collect them quickly. And your back will thank you.

Due to different primers and the coating of the case, this type of ammo varies from one manufacturer to another. While this doesn't cause any issues, some studies have shown significant differences in the powder charge of the ammo from brand to brand. In some cases, one brand would cycle a semi-auto rifle, while a different one would not. 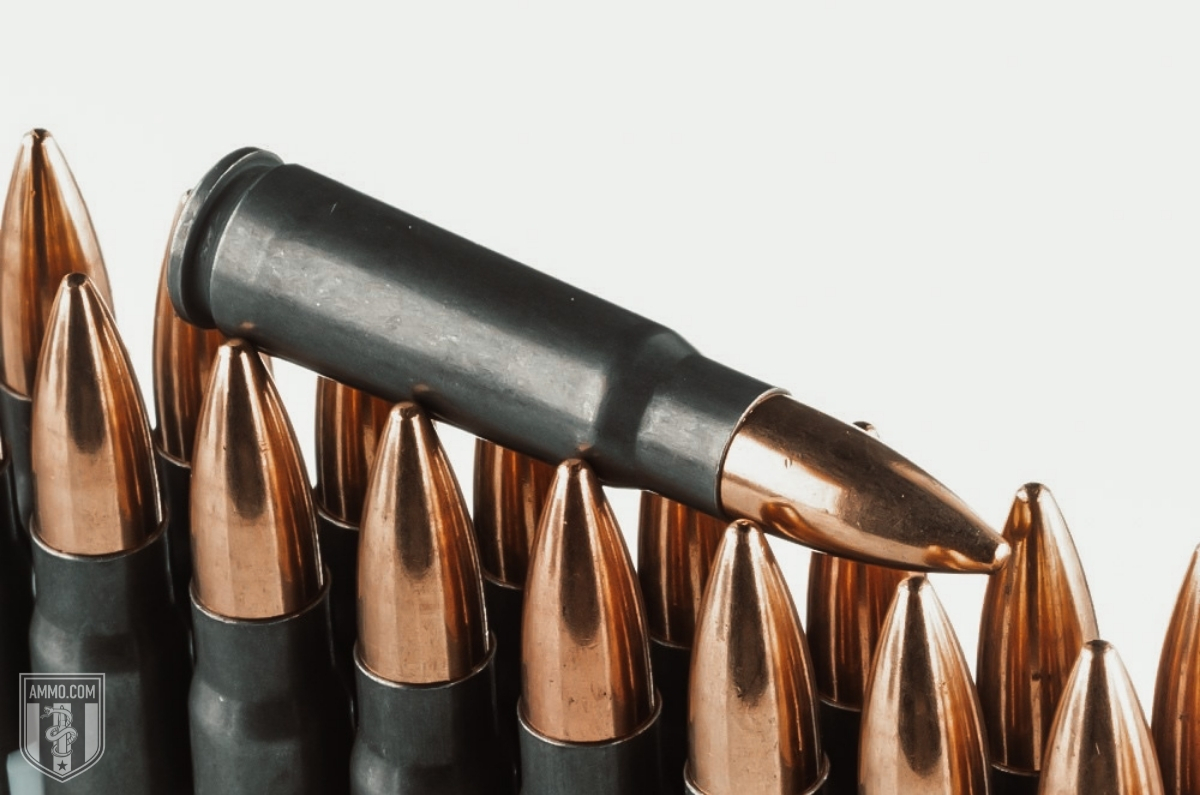 Many ranges don’t allow steel-cased rounds. This isn’t a safety issue, but instead a cost issue. Ranges make money back by recycling brass rounds and/or reloading them to sell to customers. Steel-cased ammo isn’t worth as much as brass, and if Berdan-primed, typically won’t be reloaded.

The main reason some ranges do not allow steel-cased ammo is due to the steel core bullets that some surplus Russian ammo contains.

The most famous occurrence of this was with Russian 7N6 5.45x39mm surplus ammo that contained a mild steel core, and was subsequently banned from import by the ATF.

Many indoor ranges utilize a steel bullet containment system to stop bullets fired on the range. Steel core ammo will damage these systems, greatly reducing their lifespan, and cost the range extra money to have them repaired.

Furthermore, steel core ammo can cause ricochets at indoor ranges which are a major safety hazard to the shooter and fellow patrons.

This is due to the location of the flash holes in the base of the cartridge.

Furthermore, the steel cases cannot be properly resized using a traditional resizing die. If you attempt to resize steel-case ammo, it’s highly likely you will have stuck cases to remove or you will damage your reloading dies.

Bottom line is steel-case ammo is not reloadable and is a onetime use item.

There is no reason to shun steel-case ammo like some Internet pundits will tell you. It is perfectly fine to shoot in your rifles and handguns and the reduced cost of steel case ammo really helps the pocketbook when you put in your high volume order here at Ammo.com.

However, if you like to reload, you need to look at brass-case ammo as steel-cased ammo is not reloadable.

Steel rounds are perfectly fine to use on a regular basis, and can save you a great deal of money over the long term. And even though there are some people out there who feel strongly against this type of ammo, try it out for yourself before forming your own opinion.