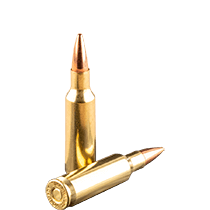 Live Inventory
Developed by Federal Premium in 2018, the 224 Valkyrie uses the same bullet diameter (.224) as 223/5.56 ammo but with a larger 6.8 SPC case that's been necked down to allow for heavier bullets and higher velocities. This allows this MSR to reach out to 1,000 yards. Learn More
per page

.224 Valkyrie ammo is one of the more controversial rounds on the market today. There are those who consider it to be one of the best innovations in the world of ballistics since the 44 magnum. On the other hand, there are those who think that it is little more than a souped up 223 Remington. Which one of these viewpoints is correct?

Well the actual answer is much more nuanced than either a “yea” or a “nay” on this. The bottom line is that it’s one of the most popular rounds for an AR build. Whether or not this round is for you is irrelevant – the 224 Valkyrie occupies a niche in the market that simply wasn’t being filled prior to its invention in 2017.

Before we go any further, we should discuss what precisely the 224 Valkyrie is and why it was developed. Federal Premium Ammunition developed the .224 in response to the .22 Nosler. It was designed as a long-range round for the modern sporting rifle. The round has an identical bullet diameter to the 5.56x45mm NATO, but is necked down from a 6.8 SPC, which means that it can accommodate larger bullets and offers a much higher muzzle velocity.

The round immediately became a rival for the more established long-range sporting rounds of the 6.5mm Creedmoor and the .308 Winchester. It is a second generation derivative of the .30 Remington, tracing its lineage through the 6.8 mm Remington SPC. This makes it the cousin of a number of rounds, including the 10mm auto, the G .224 Boz, the .357 Sig, the .40 S&W, the 9x25mm Dillon and the 9x25mm Super Auto.

The .224 Valkyrie round isn’t just for competition shooting, however. It is also an excellent round for hunting and varmint shooting. This is because it’s so fast and so accurate at long distances, easily maintaining accuracy up to 1,000 feet. You might not “need” anything that shoots so accurately so far away, but you might find that you simply enjoy shooting this round at extremely long distances.

Why Was the 224 Valkyrie Developed?

As previously mentioned, the 6.5mm Creedmoor and the .308 Winchester were long the top dogs in long-distance shooting rounds for competition. These cartridges were top-dog for a reason, but there was a hunger on the market for a smaller round that boasted the same degree of accuracy at long distances. The 223, one of the most popular rounds in the world, simply could not boast any kind of reliable accuracy for the average shooter at those kinds of ranges.

Enter Federal Ammunition. They began with their 6.5 SPC cartridge, which in turn was developed from the .30 Remington, then necked the round down so that it could accommodate a smaller bullet. This effectively means that there is roughly the same amount of propellant in the 224 as the 6.5 SPC, but the former boasts a much lighter bullet, which is why it’s able to shoot accurately at much longer distances and much greater speeds. The 224 Valk gets muzzle velocities of up to 3,300 feet per second. It can also maintain speeds of 1,961 feet per second at distances of 500 yards.

The .224 Valkyrie rifle is a versatile round that has a lot to offer shooters who aren’t interested in long-distance competition shooting. Indeed, the power of the round makes it ideal for people who prefer hunting to target shooting. You will still need to be a skilled shooter to maintain accuracy at 1,000 feet to 1,500 feet. But if you’re interested in shooting game at longer distances, there are few options that can match the 224 Valkyrie ammo round.

It can also be an effective round for personal protection, particularly in SHTF type scenarios. Because of its accuracy and power at long distances, it is not only an ideal round for hunting game at between 1,000 and 1,500 feet, but is also the ideal round for protecting your home and your family at long distances. While we hope you never need to use the 224 Valkyrie rifle – or any other round for that matter – in a self-defense scenario, no other round is going to allow you to neutralize a potential threat to you and your family at such great distances.

Long story short, the 224 Valkyrie is a round that is appropriate for any kind of shooter.

It would be impossible to discuss the .224 Valk without comparing it to the 223. The rounds are definitely different, but because they are so frequently mentioned in the same breath, we have to discuss their differences as well as similarities.

There are physical limitations to the AR platform. The well is a certain size and can only be made so big before you have a single-shot breech loading weapon – just about the exact opposite of an AR-15. This means that the first difference between the two is that you can’t fire them out of the same weapon. You’ll need something specifically chambered for the .224 Valkyrie and something chambered specifically for the 223 Rem.

The good news is that if you already have an AR-15 build, all you have to swap out to make it capable of firing 224 Valk instead of .223 Rem are the 224 Valkyrie bolt, 224 Valkyrie magazine and 224 Valkyrie barrel. This shouldn’t be difficult for people who own an AR-15, which is a highly customizable weapon with adherents who are generally into customizing anyway.

In terms of recoil, both rounds are about the same. Anyone who has ever handed a first-time AR shooter an AR-15 knows that they are often pleasantly surprised by how smooth the weapon fires, with far less recoil than one would expect from a weapon that has been so demonized in the American press. What’s more, the 224 Valkyrie is more accurate and boasts a greater degree of power than the 223. However, the 223 boasts greater muzzle velocity than the 224, with the latter maintaining a greater degree of velocity over distance. The 224 further boasts less drag, a flatter shot and greater kinetic energy.

Does this make 224 Valkyrie ammo a superior round to the 223 Remington? Maybe. But time will tell if it catches on in the same broad way as the 223. It’s worth noting that ballistics technology, like all other forms of technology, advances over time. The 224 Valk rifle might well make the 223 Remington go the way of the dodo because of its superior ballistic characteristics. Still, shooters are finicky people who tend to like what they like. And if what you like is the 223 Remington, the chances that you’re going to switch over to 224 Valk are probably slim.

The bottom line? The 224 Valk has a number of attractive properties for all kinds of shooters. It might simply be a souped up version of the 223, but is that a bad thing?