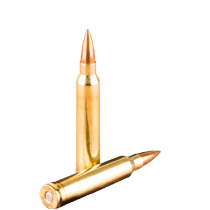 Live Inventory
Designed by Remington to be a medium bore cartridge well suited for short-barreled carbines, the 6.8 Special Purpose Carbine cartridge delivers more energy than the 5.56 NATO, is highly accurate up to 600 yards, and fits into magazines designed for AR-15-style rifles. Learn More

Remington designed their 6.8mm Special Purpose Cartridge (SPC) to have improved terminal performance over the 5.56mm NATO, which is the cartridge currently used by the U.S. military. Specifically designed to perform better when fired from carbines and Short Barreled Rifles (SBR), Remington collaborated with special ops troops and the Army Marksmanship Unit to develop the 6.8 SPC. Development began in 2002, and field trials took place in 2004. The military did not adopt the cartridge, but field trials did show an interest in returning to a larger caliber rifle for applications other than sniping.

Based on a .30 Remington rimless bottleneck case, the 6.8mm SPC has been necked down to take a 0.277" diameter bullet. Bullet weights range between 85 and 140 grains, with the 115 grain bullet being the most common. It was this bullet with a Full Metal Jacket that military trials demonstrated to have the best combination of reach and lethality. The 6.8 SPC handily outperforms the 5.56 NATO and 7.62x39, with over 1,000 foot pounds of energy persisting at 300 yards and an accuracy of one MOA still being found beyond 600 yards.

Other advantages of this cartridge include the fact that it fits into a magazine designed for AR-15 type rifles, operating pressures are lower than the 5.56 NATO, and the trajectory is comparable to the flat-shooting 7.62x51mm NATO. To fire this cartridge in an AR-style rifle, all that is required is changing the bolt, barrel and magazine. In M4-style rifles, the 6.8mm SPC cartridge delivers 44% more energy at ranges up to 300 yards than a bullet from the 5.56mm NATO. An interesting fact that speaks to the success of the design of this cartridge is that barrel length only has a limited affect on projectile velocity, and very little apparent difference in accuracy.

While not likely to replace the 5.56 NATO for military use in the near future, the 6.8 SPC has been gaining a following in the civilian market. Thanks to its effective range as far out as 300 yards (even when fired from an AR-style rifle with a 16-inch barrel), it is especially popular among hunters of deer and feral hogs. Ammunition manufacturers are meeting the demand for this cartridge by producing their most advanced bullets for the 6.8 SPC – including Federal's Fusion bullet and Hornady's V-Max bullet.

Law Enforcement agencies are considering the Remington 6.8mm SPC as a new cartridge for their duty rifles, the majority of which are chambered in .223 Remington or 5.56 NATO. Perhaps most notably, the United States Drug Enforcement Administration has been permitting its agents to buy and use AR-style rifles chambered in 6.8mm SPC.

Hornady 6.8 SPC Ammo - 20 Rounds of 110 Grain HPBT Ammunition
based on the 2 reviews below
Add review