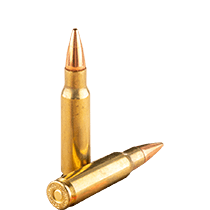 Live Inventory
The 6.5x57mm Rimmed (6.5x57R) is a solid-performing medium bore cartridge. And although it has not achieved great popularity in the United States, this ammo is very suitable for medium-sized game and performs well when compared with other calibers in its class. Learn More

Though well established in Europe as a cartridge for hunting today, it is difficult to determine the date for when the 6.5x57 Rimmed was first introduced. The evidence, and lack thereof, seems to suggest that it arrived on the scene during the 1890s. Firearms historians believe the 6.5x57mm may have been developed initially for service in the Italian military, and they also believe that this cartridge influenced the development of the 6.5x58 Portuguese Mauser.

German deer and boar hunters respect the 6.5x57R partly because it is a proven game-getter, and also because the cartridge develops the minimum allowable energy levels established by the German government for hunting these game animals. Other hunters in Europe appreciate the 6.5x57 because the accuracy is excellent, and it is able to kill efficiently without causing unnecessary damage to the meat.

Ballistics performance for the 6.5x57R is identical to that of the non-rimmed cartridge, and is comparable to both the .260 Remington and the 6.5x55 Swedish. The first bullet for the cartridge, a lead round nose, weighed 154 grains and left the barrel travelling about 2,400 feet per second. Since its introduction, bullet and powder technology have improved significantly, allowing for modern loads to offer some positive changes. Bullets today can weigh as little as 92.6 grains and usually max out weighing 140 grains, most of the time in the Soft Point configuration. Muzzle velocity starts at 2,500 feet per second, and climb just over 3,200 feet per second. These loads produce about 2,500 foot pounds of muzzle energy, and due to their excellent ballistic coefficient, most bullets can still deliver more than 1,350 foot pounds at 100 yards.

The 6.5x57R is a hard-hitting cartridge and is known for its high degree of stability – especially in situations with a crosswind. The high ballistic coefficient permits this, as well as the sectional density. Additional benefits of the bullet design include greater penetration of game animals, independent of the velocity at impact. 6.5x57R ammo is not especially popular in the U.S., but the cartridge is effective for hunting medium-sized game and is worth considering for such an application.

Sellier and Bellot 6.5x57R Ammo - 20 Rounds of 131 Grain SP Ammunition
based on the 1 review below
Add review
Freedom Fighter Support

Donna G.We are very happy with our order!

Karen P.Very happy with the whole process with your company. I actually went online today to try to order more.

David F.I am very satisfied with my order and the time it didn't take to get here. Very quick!! Long live liberty!