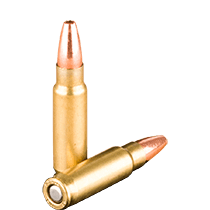 Live Inventory
In 1991, FN Herstal introduced the 5.7x28mm cartridge for use in their P90 PDW. 5.7x28mm ammo is very compact – allowing for improved magazine capacity as well as a light bullet with high velocity. These features make it an effective round against most body armor. Learn More
per page

Belgian company FN Herstal released their FN 5.7x28mm cartridge in 1991, after NATO requested a replacement for the 9x19mm cartridge. Kevlar body armor was increasingly being used, and was effective against the 9mm, so it became a priority to develop a cartridge that could defeat this body armor. The 5.7x28mm accomplished this task by penetrating a level IIIA vest at 200 meters without any difficulty. As well as its armor-piercing ability and high velocity, the 5.7x28mm cartridge decreases the risk of collateral damage because the shape of the bullet reduces the chance of ricochet. The cartridge enjoys another advantage in that the majority of the kinetic energy of the bullet has been expended by 400 meters – which is beneficial because the cartridge was developed for use in handguns and submachine guns, where effective ranges would not exceed 200 meters.

The smaller size of the 5.7x28 cartridge confers several advantages. With the 5.7x28mm weighing only half that of the 9mm, the smaller size allows a solider to carry double the amount of ammunition. There is also a significantly increased magazine capacity for firearms chambered for the cartridge. The FN Five-Seven flush fit magazine holds 20 rounds, and a detachable 50-round magazine can be used with the FN P90 submachine gun.

Most 5.7x28mm ammunition is manufactured by FN Herstal and designated for military and law enforcement use only. Two types of ammunition are currently offered by FN – the SS195LF, which uses a lead-free bullet, and the SS197R, which uses a 40 grain Hornady V-Max bullet. This latter cartridge is made by Fiocchi, which has a contract with FN Herstal to manufacture this cartridge for the American market. Federal, under the American Eagle brand, manufactures a 5.7x28mm cartridge topped with a 40 grain total metal jacket bullet. Other small manufacturers also produce the 5.7x28mm, but they have not yet made a significant impact on the civilian market.

The 5.7x28mm is not a heavy-hitting round, but is compact and accurate with a light recoil. Thanks to extended magazine capacity for weapons chambered in this cartridge, it's a good choice for personal protection. Over 40 countries currently employ this cartridge in the P90 PDW submachine gun. The P90 is popular also among U.S. law enforcement agencies, and is used by the U.S. Secret Service. With acceptance like this, many other firearms will likely be chambered for the 5.7x28 and released to the marketplace, and this unique little cartridge will maintain its place in the firearms world.