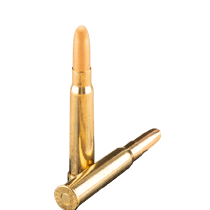 Live Inventory
Used by the Italian, German and Finnish Armies, the 6.5mm Carcano had a military service life of almost 80 years. Today it is most commonly seen in use as a hunting rifle, where it can take most medium-sized game out to 200 yards. Learn More

In 1891, the Kingdom of Italy released a new cartridge that set a new direction for rifle ammo in the military. The 6.5x52mm Carcano became the first small bore cartridge to be accepted for service in the military, which lead to the development and adoption of other renowned cartridges – including the 6.5x55 Swedish Mauser and the 6.5x50 Arisaka.

The 6.5x52mm Carcano is a rimless bottleneck cartridge topped with a 6.8mm Full Metal Jacket or Soft Point bullet. Muzzle velocity is between 2,200 and 2,300 feet per second, and muzzle energy is about 1,700 to 1,800 foot pounds. The cartridge is effective for hunting deer and small game out to 250 yards.

The Italian military chambered the 6.5x52mm Carcano in the M91 rifle, which had a bolt action and performed in both WWI and WWII. The rifle had a reputation for poor quality and poor accuracy, not like other military rifles of the time, but the rifle did have one advantage – it had a loose action, enabling fast shooting. This was not enough to keep the rifles in service, and so the M91 was replaced by the M1 Garand soon after WWII.

Many M91 rifles have crossed the pond to the U.S. Some were carried home as war trophies by returning U.S. soldiers, and others were purchased as surplus arms from the Italian government. The M91 is the best known rifle chambered for 6.5x52mm Carcano.

The 6.5x52mm Carcano likely would have gradually faded into obscurity much like so many cartridges from the late 1800s and early 1900s, but this is not the case since it was used to assassinate President Kennedy in 1963. This did not lead to an increase in demand for the M91 rifle and 6.5x52 ammo, but it did keep the cartridge from sliding into anonymity.

There are very few manufacturers today who produce 6.5x52mm ammunition, and no major manufacturers of rifles sell a firearm chambered for this caliber.