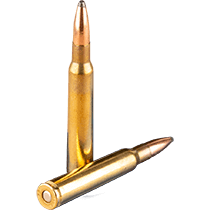 Live Inventory
Introduced in 1917, the 7x64mm was intended to be an upgrade to the 8mm Mauser – which was used by the German Army at that time. It was never accepted for military service, but has a strong following among hunters in Europe to this day. Learn More

Wilhelm Brenneke began producing his 7x64mm cartridge in 1917, basing it on the 8x64mm cartridge released in 1912. Brenneke's goal was to obtain ballistics better than the 8x64mm by reducing the neck of the case to a diameter of 7mm, though still using a charge and bullet of similar weight. The ballistics did improve just as he hoped, and the 7x64mm moved to the head of the class in terms of hunting cartridges in inter-war Europe. 7x64mm ammo was so popular, even the German Army took notice of its reputation for reliability and a flat trajectory. While they considered using the 7x64 to replace the 8mm Mauser, which their snipers used, logistical issues prevented this from happening.

The failure of the German Army to adopt the cartridge seemed like a failure at the time, but it came to be a great benefit in the long term. Hunters used this cartridge successfully, and they are able to continue doing so today. That would not have been the case had the German Army adopted the 7x64mm, due to many countries in Europe outlawing the use of military cartridges by civilians. The 7x64 would have become unavailable to hunters and demand for the cartridge would have dropped below the point of recovery. That did not happen, however, and the 7x64mm remains among the most popular European hunting cartridges in use today. This ammo doesn't have the following in the U.S. that it enjoys in Europe, but enough American hunters shoot the 7x64mm that it has gained the attention of Federal and Remington – who have produced or currently produce ammunition in this caliber. Brno and Mauser still manufacture fine rifles chambered in 7x64mm as well.

The most common rifles that fire the 7x64 are Mauser-type bolt action, although there is a rimmed version also produced for rifles with break-open actions. Bullets most commonly weigh between 140 grains and 175 grains, with several configurations available including soft point, Nosler Partition and PSP Core-Lokt. Muzzle velocities range between 2,700 to more than 3,000 feet per second. Muzzle energy for these rounds reaches 2,800 foot pounds.

The 7x64mm continues to be a great game-hunting cartridge for many animals, and is expected to remain popular across Europe and North America well into the future.