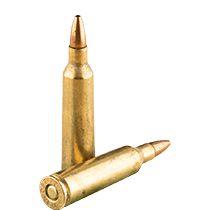 Live Inventory
Especially popular among prairie dog hunters, the .22-250 is known for its ability to remain on course in windy conditions. Some hunters use .22-250 ammo for deer hunting, but it mainly shines in long-range varmint and predator hunting uses. Learn More

The .22-250 Remington cartridge was developed as a collaboration between Grosvenor Wotkyns, J.E. Gebby and J.E. Smith in 1937, initially designed as a caliber for long-range varmint hunting up to 400 yards. They modified a .250 Savage case (which itself was modified from a .30-06 cartridge) by decreasing the neck size to accept a .224 caliber bullet. An interesting fact about the .22-250 is that it is possible to load the cartridge to achieve muzzle velocities that range from 1,500 to 4,500 feet per second. Performance across this large spectrum of velocity is reportedly consistent, as grouping is good, independent of velocity. Bullets weigh between 35 and 64 grains, and bullet choices range from PSP to V-Max – allowing a single caliber to accomplish a wide range of tasks.

The .22-250 Remington was no stranger to military service in the 1980s. For urban sniping operations, the Australian Special Air Service employed this cartridge to decrease the risk of ricochet as well as over-penetration.

Most major manufacturers have a rifle available for the .22-250 with many different actions, yet one of the most popular is built by the company that developed the cartridge – Remington. Bolt action is the most common type for these rifles as varmint hunters are partial to them.

The .22-250 maintains its popularity due to its excellent accuracy and mild recoil, and the ammunition is widely available at price points similar to other .22 caliber centerfire ammo. It performs well for a variety of applications over wide ranges (it's even a good choice for hunting deer-sized game as far out as 100 yards), and can be depended upon for consistency. A gun writer once wrote that the cartridge was “boringly accurate,” a reference to the round's predictable performance – certainly no insult for this great varmint cartridge.

Michael K.Great job. You will definitely get my future business.

Tom V.Arrived quickly and before Christmas! 5 stars. Will order again.”

Steve A.My order was filled to my complete satisfaction.

“There is no doubt in my mind that millions of lives could have been saved if the people were not "brainwashed" about gun ownership and had been well armed. ... Gun haters always want to forget the Warsaw Ghetto uprising, which is a perfect example of how a ragtag, half-starved group of Jews took 10 handguns and made asses out of the Nazis.”Theodore Haas