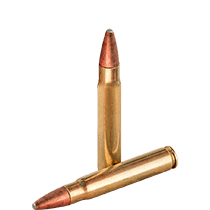 Live Inventory
In 1905, the 9.3x62mm was designed to be used in the Mauser type action and is well suited for European and North American large-game hunting. It has also been found in Scandinavian countries, where it is favored for moose hunting. Learn More
per page

Otto Bock developed the 9.3x62mm cartridge in 1905. Designed to hunt large game in Africa and also fit into the Mauser Model 1898 bolt action rifle, the cartridge was affordable, easy to find, and had great knockdown power – all factors that helped increase the popularity of the 9.3x62mm among guides and game hunters in Africa.

The case of the 9.3x62mm is rimless, bottlenecked, and holds a bullet with a caliber of 9.3mm or 0.37 inches. Bullets for the cartridge commonly weigh between 231 and 293 grains, and are usually soft point or the more advanced form of VOR-TX. Muzzle velocities range between a low of 2,400 feet per second and a high of 2,600 feet per second. The bullet has big knockdown power, with some loads transmitting as much as 3,800 foot pounds of energy! This cartridge is often compared with the .338 Winchester Magnum and the .375 H&H Magnum.

The 9.3x62mm never really attained much popularity in the U.S., but it did make a serious impression on hunters in Africa and Europe. Hunters have used this cartridge for game animals on the plains of Africa and for moose in the Nordic countries. Canadian hunters have also used it for harvesting all of Canada's large game. The 9.3x62mm has even become popular recently among Australian hunters of Sambar, a species of deer which is exceeded in size only by elk or moose. It's not that the Australians suddenly discovered the cartridge from more than a century ago, but rather that a 1996 ban of semi-automatic rifles made the combination of this powerful cartridge and bolt action rifle a logical choice.

Norma and Lapua as well as Prvi Partizan and Sellier & Bellot are some of the European manufacturers of 9.3x62mm ammo. No major rifle maker from the United States has chambered a rifle in 9.3x62mm, but European manufacturers like CZ and Blaser have made some quality firearms. The 9.3x62mm is more than 100 years old, yet it remains among the most popular big game rifles in Scandinavia and Europe. The performance and reputation of this cartridge throughout its history ensures that the 9.3x62mm will still be used for many years to come.