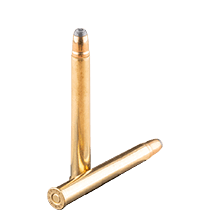 Live Inventory
Designed in Germany and mostly found in drilling-type firearms, 9.3x72mm rimmed ammo has been in production for over 100 years. With 2,000 pounds of energy at the muzzle, it is effective on medium and some large European game up to 200 yards. Learn More

The 9.3x72R, introduced in the late 19th century, is most often chambered for drilling rifles. Many guns chambered for this cartridge were made in Europe as the third barrel of a side-by-side 12 gauge shotgun, the rifle barrel nestled below and between the shotgun barrels. This practical arrangement allowed hunters and gamekeepers to choose to fire a blast of shot or a bullet, depending on the game they were hunting. The 9.3x72R was developed initially as a black powder cartridge, but it did successfully make the transition to smokeless powder.

The case of the 9.3x72R is straight and rimmed, and most commonly topped with a soft point bullet or lead round nose bullet. Bullets weigh between 193 and 200 grains, and muzzle velocity is 2,000 feet per second. The resulting muzzle energy is about 1,100 foot pounds, making the ballistics of the 9.3x72R comparable to the .35 Remington. It is well suited to take most game of medium size in Europe, and some hunters in North America will even pursue bear with this cartridge. It's effective to a maximum of 200 yards, at which point bullet energy is less than 800 foot pounds (it drops like a stone after 200 yards). If the round is zeroed at 100 yards, it will fall 15 inches by 200 yards. And by 300 yards, it will plummet 57 inches.

The 9.3x72R is an old cartridge, but is still produced in limited quantities by Sellier & Bellot and RWS. The cartridge is difficult to obtain, and most shooters must hand load any ammunition they want to fire in this caliber, but today even the brass is hard to find. If you are passionate about shooting the drilling rifle, the 9.3x72R serves well to hunt medium game.