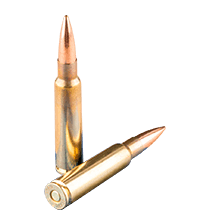 Live Inventory
Originally introduced as a paper patch round in 1889, the 7.5x55mm Swiss cartridge continues its service in the Swiss military to this day. It is also used by civilians in the K31 bolt action surplus military rifle as well as commercially manufactured rifles. Learn More

Eduard Rubin, a Swiss Army Lieutenant Colonel, designed the 7.5x55mm Swiss cartridge in 1889. The Swiss military was using a 10.4x38mm rimfire rifle at the time, and the 7.5x55 Swiss used a bullet with a smaller diameter (.304 inches) and was among the first cartridges to investigate the idea of firing smaller and lighter bullets at high velocity. This cartridge was chambered in the Schmidt-Rubin Model 1889 rifle, which the Swiss Army adopted for service in 1889. An interesting fact about the cartridge is that the bullet, configured as a steel-capped round nose and weighing 211 grains, used a paper patch. This was common at the time, and increased the time required for manufacturing.

7.5 Swiss ammo was modified several times during its first three decades or so to stay abreast of new technologies and components. The GP11 version was introduced in 1911, which has proven accuracy and has been used effectively in many target competitions. It appeared on the scene in 1911, and remained in service for approximately 80 years. This rimless bottleneck cartridge was first introduced for bolt action rifles, and it spent the last years of its service life being fired from the select-fire Stgw57.

Today Hornady, Prvi Paritizan, and Wolf, among others, manufacture 7.5x55mm Swiss ammunition – with the 174 grain FMJ spitzer point as the most common load. The bullet leaves the muzzle with a velocity of about 2,500 feet per second and generates a muzzle energy greater than 2,500 foot pounds. GP11 ammo used by the Swiss military is loaded a little hotter and pushes the same bullet to more than 2,600 feet per second.

In the United States today, 7.5x55 Swiss ammo is mostly seen chambered in surplus Swiss K31 rifles. The K31 is not as popular as other bolt action rifles of the same era, but it does perform well for hunting and target shooting.