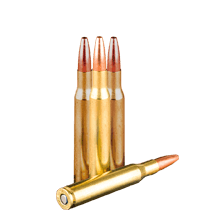 Live Inventory
Ammo is considered surplus when it has been released by a government to be sold to the general public. Many countries do this, but Russian and American surplus ammo rounds are those most commonly found today – especially .50 BMG, 5.56, and 7.62x39. Learn More
per page

Surplus ammunition is extra ammo that has become available to parties beyond the original contract recipient – often a government. Sometimes the ammo has become obsolete due to age, weapons systems changes or a variety of other reasons. When this happens, governments are able to recoup a portion of their expense by selling this ammo as surplus.

In the past, military surplus ammo from the U.S. was often sold to the public, but the military has lately needed more and more ammunition, reducing the available ammo and drying up the surplus market. But the U.S military is not the only source of surplus ammo. Russia and Germany as well as many former Warsaw Pact countries sold and still sell massive volumes of military surplus ammunition.

The History of American Military Surplus

Military surplus in the United States is actually a more recent invention than you might think. Rather than going back to the beginning of the country, it really only goes back to the United States Civil War. This was the first modern war in the United States with everyone wearing identical uniforms, outfitted with the same arms. Prior to this, most of the fighting was done by semi-private militias. This meant that, oftentimes, their weapons and uniforms didn’t even match those within their own company, let alone those of other groups fighting on the same side. Both the North and the South made nationalized uniforms with standard-issue weaponry during the War Between the States.

The Strange Story of Francis Bannerman

The equipment started popping up in the general dry goods and department stores around the country. But it was one man, Francis Bannerman, whose supply company was the first to sell both new and used military equipment. His store opened right on Broadway in New York City in 1872.

Bannerman was always an enterprising young man. A Scottish immigrant who landed in the United States, he started buying large lots of bric-a-brac and scrap metal and even abandoned ships when he was still in primary school.

He did well for himself at the end of the Civil War when he was just 14 years old. Not only did he clean up selling surplus to the general public, he also made a killing outfitting entire regiments of the United States Army during the Spanish-American War. Bannerman's Castle, a storage facility on Pollepel Island along the Hudson River, became the place where Bannerman stored his massive cache of military surplus gear. The store itself was massive: seven stories at a total of 40,000 square feet. He also made money through his 350-page mail order catalog.

Still, the business model didn’t much take off until after the end of the First World War.

The industry hit its peak during the Great Depression. Because of the inexpensive nature of army and navy surplus stores, they were a perfect match for these lean times. This wasn’t true of just clothing, but also supplies, including ammunition that could be used to put food on the table.

It was during the 1950s and 60s that the military surplus store entered its golden age. By this time, it was no longer a novelty some Americans had access to, but something nearly every hamlet and burg in the United States could boast one or two of. They might be known as “War Surplus Stores” or “GI Stores,” as most of the gear was leftover from American GIs during the Second World War and the Korean War. What’s more, America was leaving the era of government-dictated deprivation in the form of rationing. The country had a surplus of income and military surplus was one big place it went.

Surplus stores went into decline after the 1990s. A quick trip to your local army and navy surplus store is going to reveal a lot of equipment that is anything but military surplus. This is because, even though the United States has been bogged down in ever increasing wars, far fewer Americans have served in them. Compare the nine million men who served during the Vietnam War with the 2.5 million who served in Afghanistan and Iraq.

But surplus stores are struggling for another reason: In the age of the internet, there’s far less need for surplus stores to meet the needs for surplus military equipment. In fact, these days you can purchase it directly from the government on a website maintained for just such a purpose.

Still, even as sporting goods stores and even big box stores entered the American marketplace, the army and navy surplus store has remained a mainstay of Main Street America’s economy. Not all army and navy surplus stores are created equally, but if you can find a good one, you have an endless supply of camping, hunting and survival gear at prices that are impossible to beat.

The surplus ammo buyer, whether being resold by a government due to changing weapons systems or because too much was made, can be confident that the ammo is high quality and was manufactured to strict standards. The only real concern when it comes to surplus ammunition is that when fired, some primers will deposit a residue in the bore of potassium chloride salt, which is a corrosive compound that can eventually damage the barrel if it gets left in a weapon for long periods of time without being cleaned out. Most ammunition that utilized this compound was manufactured more than 50 years ago. However, it is possible to find some ammo surplus with this compound produced into the 1980s.

It is still easy to find ammunition made in the 1940s and 50s, with .30 carbine and .45 ACP being the calibers with the greatest available volume from this era. Other surplus ammo calibers available in abundance are .30-06, 8mm Mauser and 7.62x54R – as governments purge their ammunition storage facilities to create space for the ammo used in newer firearms. 7.62x39mm and 5.56mm are not quite as common, but can be found occasionally. 50 BMG is another very common and popular caliber in army and navy surplus stores.

Military ammo can be subject to rough handling and the full spectrum of environmental conditions, so much surplus ammo can be bought in metal cans for storing long term. Shooters find this to be a great added value if they wish to stock up on ammunition, or if their firearm is chambered in a rare or obsolete caliber.

It is important to remember that when buying military surplus ammo, it is dangerous to fire 5.56mm in rifles chambered for .223. The pressures will be too high and there is severe risk of injury and damage to the firearm. 7.62mm NATO and .308 Winchester, while similar, also have different case dimensions – which result in increased pressures as well. Know which cartridges your firearm can and cannot shoot, and don't take risks just to save a few bucks.

Collectors of military paraphernalia place great value on ammunition boxes and accessories. They display the cans personally and in museums. Shooters of surplus ammunition often find that surplus ammo shoots just as well as commercial ammo, or sometimes even better. The only real downside to surplus is that most of it cannot easily be reloaded since the cases use Berdan primers (which makes reloading more difficult).

Surplus ammo is a great value for the money, and can allow many fine old firearms to keep shooting for years to come.

What is surplus ammo?

Surplus ammo is often corrosive because it uses a Berdan primer. This primer releases a salt that corrodes metal. Although this doesn’t impact firing, it can weaken the casing and these rounds should not be reloaded. This salt can also harm a firearm if it’s not cleaned after use. To counter this problem, simply wash the firearm after use in warm, soapy water.

How can you find surplus ammo?

Up until the mid 1990s, the best place to find surplus ammo was through an Army Navy store, but military surplus stores have become less common in the last few decades. Today, shooters can purchase surplus ammo at both online and brick and mortar retail gun stores. They can also purchase military ammo directly from the government or through the Civilian Marksmanship Program (CMP).

What does military grade ammo mean?

Military-grade ammo refers to basic ammunition that can be used for general purpose shooting. It is new brass and loaded at a commercial ammo company. These rounds are often full metal jacket or soft point cartridges. They are never specialty rounds and often budget brands, such as Magtech or Fiocchi.

Surplus ammo is made for the government by various contracted suppliers. In the U.S., this may include commercial ammo companies, such as Federal or Winchester.

How should you store surplus ammo?

Surplus ammo should be kept in a cool, dry place. Although this is important with all ammunition storage, it is even more so with surplus ammo, which may be older than commercial ammo purchased at a retail store. What’s more, military ammo often uses a Berdan primer, which causes corrosion when exposed to moisture. In many cases, surplus ammo comes in military-issued metal ammo cans.

Russian surplus ammo is sometimes referred to as Spam or “Spam cans” because of how it’s packaged. Russian military ammo is bulk packaged in wooden crates. Within each crate are the Spam Cans, sealed metal containers that resemble a can of Spam (canned pork) in which the bullets are stored to protect them from the elements. Each Spam Can contains an opener that allows the container to easily be pried open.

Why is surplus ammo cheap?

Surplus ammo is cheap because it is often out-dated or auctioned off. This allows the government to recoup some of the money it lost on the ammo it can no longer use. The government also gets ammunition cheaper than civilians, as it buys in bulk from contracted suppliers.