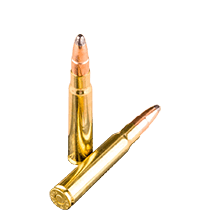 Live Inventory
Introduced in 1905, the 8mm Mauser continues to be a respected military cartridge to this day. It also has a great following among hunters as it is a proven round for use on medium- and larger-sized game. Learn More
per page

The Gewehr-Prufungskommission developed the 8mm Mauser in 1905, a cartridge also known as the 7.92x57mm Mauser. This cartridge was developed with the goal of improving upon and replacing the Patrone 88 or M88 cartridge, which was being used at the time. The 8mm Mauser has more than a century of active service in the military, and to this day it is still in reserve status in many countries.

The Germans used the 8mm Mauser in WWI, where the cartridge gained the attention of other nations. It earned respect for its accuracy and power, and many people likened the performance to that of the American .30-06. By the time WWII started, the British had mounted 8mm machine guns on their trucks and Jeeps. The Germans manufactured several versions of the cartridge including incendiary rounds, tracer rounds, armor piercing steel core rounds, and sniper rounds. The cartridges made for sniping were manufactured to the strictest standards, and are comparable to match ammunition made today.

The 8mm Mauser is mostly found in the United States, chambered in surplus Gewehr 98 rifles and short Karabiner 98k rifles. Hunters like the cartridge for its effectiveness on game of medium size. The proper ammo easily reaches out with effectiveness to more than 400 yards, taking bear, boar and deer. Blaser, Steyr, Mauser and Zastava are some of the better known companies that still make hunting rifles in this caliber. Prvi Partizan, Sako and Sellier & Bellot currently manufacture 8mm Mauser ammo, most commonly with Soft Point or Full Metal Jacket bullets weighing 196 grains – although lighter loads are also available.

The shooter today should know that not all cartridges that carry the 8mm Mauser or 7.92x57mm name are the same. The M88 cartridge, also sold with the name 8x57J, cannot be fired from most military surplus Mauser rifles or civilian rifles, as the bore of these rifles is sized for a 0.318-inch caliber bullet. There are rimmed versions of the 8x57J as well as the 8mm Mauser, and the buyer should know for sure which version their rifle fires before committing to an ammunition purchase.

The 8mm Mauser has a long record of excellent service, and it has earned the respect of many hunters and target shooters alike – all of whom will certainly keep using this great cartridge for many years to come.