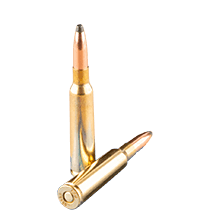 Live Inventory
Developed in 1891 for the armies of Sweden and Norway, the 6.5x55mm cartridge was popular among biathlon competitors until 1975 (when competitors changed to .22 LR). Today, 6.5x55mm Swedish ammo remains known as an accurate rifle cartridge, suitable for medium- to large-game hunting. Learn More
per page

In 1891, Mauser Hunting Rifles developed the 6.5x55mm Swedish Mauser cartridge for testing and evaluation by the nations of Sweden and Norway. These two neighboring countries, then known as the United Kingdoms of Sweden and Norway, historically agreed on an ammunition caliber and then purchased firearms of their own choosing. This allowed for a level of logistical flexibility and interchangeability, as both countries together provided for their common defense. The cartridge was used in military service until the end of World War II, at which point Sweden changed to the 7.62x51 NATO. It was chambered in rifles as well as light and medium machine guns. Among the more famous machine guns that fired the 6.5mm Swedish include the Browning BAR, Bren Gun, and FN MAG.

The end of service in the military didn’t mean the end of this cartridge, however. The 6.5x55mm had gained popularity among hunters in Europe due to its excellent ability to hunt medium to large European game. Some characteristics that contributed to its popularity are accuracy, penetration, and moderate recoil – which is why the performance of the 6.5x55 is often compared to the .270 Winchester. The 6.5x55mm is mostly used by Scandinavian hunters to pursue moose and reindeer, although it's somewhat well known among hunters of large and medium game in North America. For the time being, there are no U.S. companies that manufacture rifles chambered for 6.5x55mm, but that doesn't mean this cartridge is impossible to find.

In addition to hunting, the 6.5x55mm has also been used in competitive shooting. It was most commonly used by biathlon competitors who knew and respected the capabilities of the cartridge, and was a popular choice for biathlon competitions until 1975 (at which point the .22 LR became the standard cartridge for the sport). The most common load fires an FMJ bullet weighing 140 grains and moving 2,400 feet per second. Remington, Hornady and Federal currently produce 6.5x55mm ammo, as do Wolf, Privi Partizan and others. Several European rifle manufacturers build 6.5x55mm rifles including Blaser, CZ, Mauser, Sauer and Steyr. If you need a cartridge with great accuracy and mild recoil that will harvest most game in North America and will also do well at the range, the 6.5x55mm is worth consideration.

John J.Your team has done a great job and I am very satisfied with my purchase. I will keep you in mind for future purchase. Thanks!

John P.I was very happy with the website, prices, and quickness of shipping. I will be shopping here again. Thank you, Ammo.com Team.

Brenda B.I was very pleased with your service. My order was delivered quickly,and my directions followed exactly. I will absolutely be doing business with you again, and will highly recommend you to others. Thank you for your excellent service.