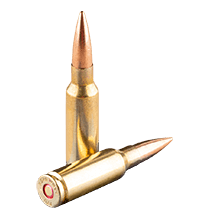 Live Inventory
Designed to be a highly accurate, low recoil cartridge, the 6.5mm Grendel works in an AR-type rifle and is commonly used among hog and deer hunters. This is because the cartridge has similar performance – and better range – than other medium bore rifle cartridges. Learn More
per page

Introduced by Alexander Arms at the 2004 SHOT Show, the 6.5mm Grendel was developed in an intermediate caliber that would outperform the 5.56x45 round and would be effective up to 800 yards out. It also needed to be chambered in the AR-15 platform, including the double stack magazine configuration. The resulting cartridge has a “necked up” case based on the 6mm PPC benchrest cartridge.

The 6.5mm Grendel is a versatile and accurate round, and is compatible with the AR-15 platform, allowing for application in a variety of shooting tasks. The cartridge reportedly holds four-inch groups of three shots at 600 yards – a level of accuracy that makes it popular among varmint hunters. It retains more energy throughout its flight due to the favorable ballistic coefficient of the bullet, as well as the shape and size of the case. Silhouette shooters appreciate this characteristic of the cartridge, as do military users. This round does not require as much powder to generate the amounts of energy found in similar cartridges, which results in less recoil and longer barrel life.

Specific to military and law enforcement markets, Alexander Arms makes an armor-piercing cartridge with a tungsten core bullet weighing 125 grains that they claim is capable of penetrating a level III SAPI hard plate at 300 meters. Another valuable characteristic of the Grendel in military and law enforcement applications is the reliable function in rifles with full automatic and three shot burst capability. It is also able to be fired in belt-fed weapons if necessary.

Commercially available Grendel ammo bullet weights range between 85 and 130 grains. Muzzle velocities are in the range of 2,500 to 2,800 feet per second, and some loads see the bullet still retain more than 1,000 foot pounds of energy at 600 yards. 6.5mm Grendel ammunition is manufactured by Alexander Arms, Hornady, and Wolf Performance Ammo – keeping the cartridge easy to find and making the price point comparable to similar cartridges.

Hornady Black 6.5 Grendel Ammo - 20 Rounds of 123 Grain ELD Ammunition
based on the 1 review below
Add review

Prvi Partizan 6.5 Grendel Ammo - 20 Rounds of 120 Grain HPBT Ammunition
based on the 1 review below
Add review