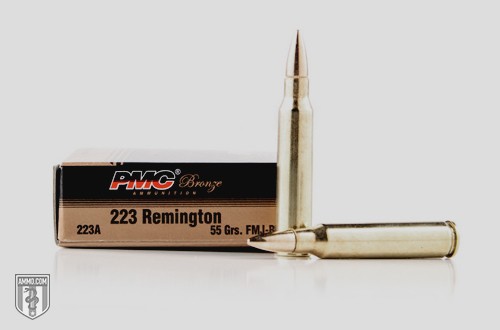 As with any full metal jacket bullet, the FMJ boat tail is fully (or mostly) encased in copper or another hard metal or material. Roughly resembling the shape of a boat, boat tails are named for their designed tapered rear when viewed from the side. This bullet type is commonly used for competition shooting due to their easy assembly. These rounds tend to be easy to assemble without denting, nicking or scratching the bullet surface – and any tiny imperfection can lead to unwanted bullet performance, or can even cause issues with the casing.

When the bullet is fully encased, it can be called a TMJ or total metal jacket bullet. However, these are commonly only encased on all sides but the rear. The reason for the casing is two-fold. It can limit the amount of lead spread in the air when firing and can add penetration. Full metal jacket boat tails tend to be fully encased to limit lead issues even more.

The whole purpose of the FMJ Boat Tail bullet was to provide a more stable flight and increased accuracy. This is done by tapering the end of the bullet, causing an increase in the ballistic coefficient. Today, most shooters demand the accuracy of the boat tail design, as it out-performs designs of the past. Most precision rifle shooters, like those who shoot F-Class competition, rely on the consistency and long-range performance of the boat tail design.

There aren’t many true disadvantages to this bullet type, unless you’re using them for something other than their primary use. Depending on the manufacturer, this could be competitive shooting, long-range practice or even hunting. The one thing a lot of FMJ bullets suffer from is over-penetration. These bullets can go straight through a target and keep going – because unless they were designed to tumble or fragment, they remain intact on impact (this will depend on the target material, of course). Typically, you won’t be using these bullets for home defense unless the zombie apocalypse happens to occur.

Some areas don’t allow the use of any FMJ bullets – even boat tails – so make sure you know what’s allowed on the range, the hunting area or other public land before you start shooting.