Looking for Fusion ammo? See what we have in-stock: Fusion Ammo Search » 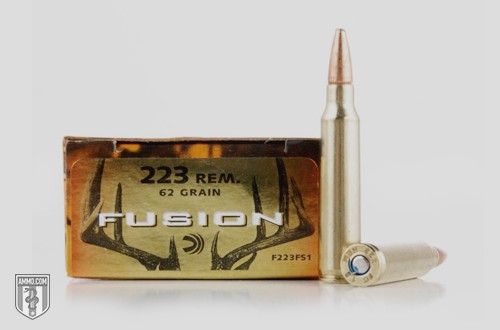 Fusion is a line of ammunition from Federal Premium well known for deer hunting. The name comes from the fact that the jacket is electro-chemically fused with the lead core, so there is almost no chance of early separation. When these impact a target, the skived tip allows very good and consistent expansion, even at very long ranges. This line of ammo also has quite a variety of different sizes for hunting, from handgun to African game and everything in between.

This ammo type is marketed as “mid-range” by Federal Premium, and is somewhere between average and “premium” ammo. Most commonly found in Federal .223 to 7mm Rem. Mag., Fusion can accommodate most any hunter's needs. And when it comes to venison in the freezer or trophies on the wall, it's hard to beat Federal 30-30 Fusion ammo, as it has the stopping power you need for short to medium range shots.

If you’ve used regular lead bullets with different jackets, sometimes they don’t perform as expected. The Fusion line is very uniform with each shot, as the bullets group very well and expand similarly when they strike a target. Naturally, where you hit a target will change that quite a bit. For instance, hunters know that if you strike soft flesh versus shoulder bones, the wound creation will be very different.

This round is marketed mainly for hunting, so it’s an advantage that you can use it most everywhere hunting is allowed.

As a factory ammunition, it may not perform as well as top-of-the-line reloaded ammo or other premium deer hunting ammo lines. For the average shooter, this won’t be a concern. But for professionals, every advantage possible will usually be preferred.

Overall, this is a well-respected line of game hunting ammunition, and hunters across the world seem to think highly of it. The inclusion of handgun rounds is also a nice touch, even though you won’t run across too many people who hunt whitetails with a pistol. There’s also muzzleloading ammo and primers.