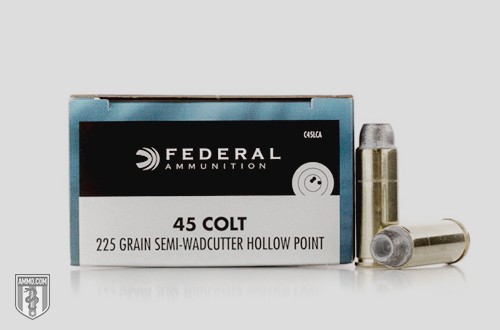 The wadcutter is a very unique type of bullet, very much like a lead cylinder. Almost exclusively used to punch holes in paper with low pressure and lightly loaded cartridges, wadcutters don't change shape or become deformed when fired. They make scoring target sheets extremely easy because the round hole created is very defined compared to any other type of ammunition.

The lead semi wadcutter bullet is that same cylinder, but it has a tapered nose with a flat point. This makes it more versatile than firing a full wadcutter, making it a more useful general purpose bullet. These come in various forms, one of which is the lead semi-wadcutter hollow point, or LSWHP. This particular style of wadcutter can be found with ammo lines by every major manufacturer and distributor, and is almost always found in the “target ammo” section.

This bullet is shaped similarly to a round nose flat point and has a hollow nose that is usually covered with a thin layer of lead, plastic or another material. The hollow point allows it to expand pretty well without earning the true designation of “hollow point ammo.” The flat tip, while mostly for scoring on paper targets, works very well with the hollow point. And what you end up with is a nicely balanced bullet that’s very accurate at short ranges.

The two main advantages of the LSWHP are that it performs well for training and target shooting, and it’s a good defense ammo. The reason this is considered defense ammo where the full wadcutter is not, is due to the design. The hollow point, combined with the flat tip, gives this quite a bit of stopping power, and these are almost always allowed where regular HP bullets are not.

Wadcutters aren’t loaded to have high velocity, because they are intended mainly for paper targets. This can cause problems if you’re using this type of ammo as a home defense round in certain areas. In cold climates, people wearing thick layers of clothing may not suffer as much damage as someone with lighter clothes (if you have to engage them at a distance). This may not sound like much of a concern, but when it comes to safety, you want to be sure an intruder or other threat goes down right away. As always, it depends on what round you’re using, who made it and the gun. But at close range, it should work fine.

LSWHP ammo can be found in many calibers, with .45 LC and 9mm being popular choices.