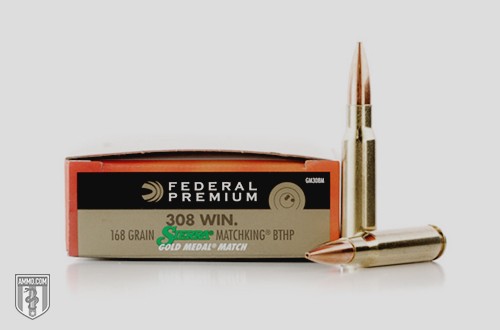 Hollow point bullets come in an amazing array of styles, and among them is the boat tail. The hollow point boat tail bullet (HP-BT) – also known as the boat tail hollow point or BTHP ammo – is primarily a rifle ammunition used for hunting big game at long range, and is sometimes used as a coyote and wolf ammo. Like other hollow points, the bullet expands rapidly upon impact, creating a large wound channel and typically stopping most creatures in their tracks with that single shot.

The boat tail design can increase accuracy and is preferred among many hand reloaders due to the tapered tail – which is relatively easy to combine with a casing without accidental scratching or denting.

When looking at hollow point boat tail ammo, you’ll come across selections from many different manufacturers, and each of them will have something different or proprietary to offer. You’ll find various styles of tips, shell casings and methods of production. One of the most popular for competition is the Match King bullet from Sierra. This bullet has been chosen by several manufacturers for their premium ammo products – one of the better known companies is Federal, which uses Match Kings in their Gold Medal line of precision ammo.

The HP-BT bullet is usually more accurate than normal HP bullets at long range due to the tapered end. This can be very noticeable while hunting or long-range target shooting. Quite a bit of this accuracy will depend on the shooter and the weapon being used, but the tip of the bullet will be a factor as well. A regular hollow point with the concave tip is less aerodynamic, and at long range this can alter the path slightly. Adding the boat tail helps improve accuracy, and when combined with a tip that covers the hollow area, the accuracy is dead on at very long range.

This type of bullet will expand in the same manner as any other hollow point. When it impacts a target, the bullet will flatten, mushroom or blossom outwards from the center, and can double the diameter of the wound. This is very punishing to living things and also relatively safe, as it is unlikely to over-penetrate and hit other people or items in the vicinity after making impact with the target. It will expand just as well as (or better than) soft point bullets and will easily outclass round nose bullets when it comes to expansion.

The most popular use for this particular ammo is hunting big game – like deer and moose or thick-skinned animals like hogs. The expansion happens very rapidly, and unless you nick the animal, it’s not going to get very far (maybe 30 yards at most before bleeding out). The wound created is massive compared to typical rounds and is gigantic compared to FMJ bullets. Some people keep this ammo on hand for long-range home defense and as a survival ammunition to stockpile. If stocking up, try to stick with brass casings to prevent corrosion.

This is a popular hunting round, but it’s also fun to shoot at targets. Its impact on things like bottles, cans or fruit can put on a nice show and help break up the monotony of normal target shooting. If you’re looking for a great hunting ammo, you can do a lot worse than HP-BT.