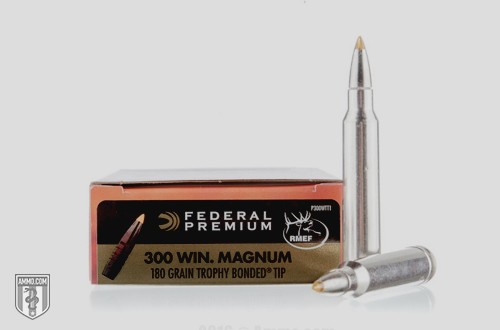 This bullet and its tip were created for one purpose – to take down large, thick-skinned animals (we’re talking African game). These bullets have great features that enable massive penetration and expansion, like a large and very accurate hollow point.

The Trophy Bonded Tip was available as its own separate bullet for quite awhile, but unfortunately it is no longer for sale from the official website. You can probably track some down if you’re a reloader interested in this particular bullet. A lot of distributors list them as “backorder,” which can be a good sign in some cases, as it’s not quite “discontinued.”

This is a big-game bullet found mainly in large rifle calibers. Two ammo lines from Federal are the Sledgehammer and Bear Claw, which are also big-game bullets. Any ammo using this bullet will tear through a big animal and devastate it internally. While perfectly usable for deer, moose and bear – using this bullet on smaller game is not what it was intended for because of its deep penetration.

This style of bullet is one of the high points of big-game hunting technology. Reviews of this bullet are almost all positive, with some great African hunting tales to go along with them. The reported accuracy with ammo using the Trophy Bonded Tip is very impressive. And it’s not uncommon to have baseball-sized grouping at very extreme ranges over 500 yards.