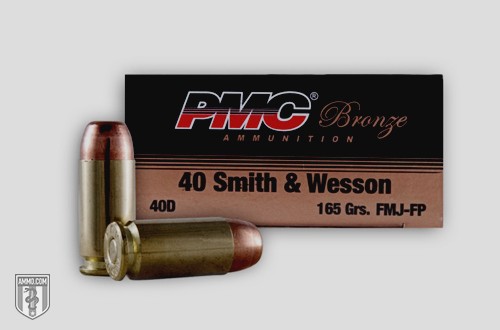 The full metal jacket flat nose (or FMJ-FN) is just as the name implies – a full metal jacketed bullet with a flat nose. This type of ammunition is popular among pistol shooters and is often sold on-site at shooting ranges, both indoor and outdoor. One of the main reasons the nose is flat is so you can more accurately gauge where the round lands on your targets. The diameter is much more pronounced when a target is hit, and some competitions prefer these over normal-style FMJ bullets.

The flat nose bullet is sometimes called "full metal case flat nose" or "flat point," which is essentially the same type of ammo. If you can’t find something in FMJ, the FMC is always a comparable option. The most common caliber offered with the FMJ-FN is .40 S&W, but 9mm and .38 Special are fairly easy to find with this bullet as well.

As with any ammo type, where you get it affects its materials and how it’s made. Every company has their own manufacturer that does things their own way, which results in a number of different name brands and ammo lines to choose from.

The most basic full metal jacket bullet is lead coated in copper. Sometimes the base of the bullet is left open, and other times it is also coated, resulting in a TMJ-type bullet with a flat nose. Many things can be changed – including the lead, the exterior, and the addition and removal of other materials. Every change alters the way the bullet performs and what happens on impact with a target. The best rule is to select the ammo type that is best suited for the task at hand, and many types of FMJ-FN are designed for very specific uses.

The biggest advantage of FMJ-FN ammo is that it has the best of both worlds when it comes to accuracy and feeding. Wadcutter bullets have great difficulty feeding in a semi-auto pistol. However, they are usually very accurate and can punch holes with clean edges in targets for more accurate scoring. FMJ bullets feed easily into semi-auto pistols, but some would argue that they do not have the same degree of accuracy as wadcutters, which can make those close calls even more difficult.

The FMJ-FN is accurate and will punch a cleaner hole through a paper or cardboard target than FMJ bullets. It's a great choice for shooting competitions, where the focus is on short-range targets that require speed as well as accuracy – like USPSA and IDPA.

You might think that because the nose is flat, there will be a loss in aerodynamics during flight or accuracy issues. But in reality, the bullet travels so fast, this simply isn’t going to be noticeable unless you’re a top-tier pro shooter. When compared to a standard full metal jacket round, there really aren’t any real disadvantages to using a flat nose for target shooting. You may notice a more pronounced change if you're using a rifle and your targets are hundreds of yards away, but for a normal competition or match shoot, you probably can’t tell the difference.