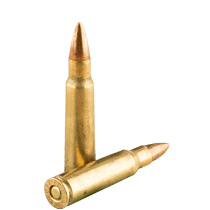 Live Inventory
Originally used in the RPD Machine Gun and SKS Rifle, it was its use in the AK-47 that made the 7.62x39mm one of the most widely produced rifle cartridges. To shop 7.62x39 ammo in bulk, check out our 7.62x39 bulk ammo page. Today, 7.62x39mm ammo remains mostly used in military-style rifles, but is also known for its hunting accuracy. Learn More
per page

Introduced in 1943, the 7.62x39mm cartridge was originally chambered in the RPD Light Machine Gun as well as the SKS Rifle. Soon after its development, the entry of the iconic AK-47 into the Soviet military ensured the 7.62x39 would have a place for many years to come. The cartridge has been employed in militaries around the globe, and is used by many police officers and civilians.

The round is also known as the 7.62 Soviet and sometimes as the .30 Russian Short, though the latter of these is somewhat archaic. Thanks to its use in the AK-47, a semi-automatic rifle virtually everyone in the world has heard of, 7.62x30 ammo is used across the globe.

Because it was a round preferred by the Soviet Union in combat, it needed to be able to be fired in extremely warm and extremely cold climates in every region. Thus, a rifleman can use the 7.62x39mm in anything from the poles to the equator.

What the AR-15 is to the United States, the AK-47 is to Russia and the Eastern Slavic countries. The original design work began in 1945, but the AK-47 didn’t reach the Red Army until a year later in a fixed stock version. Seventy years later, the AK-47 (or “Kalashnikov”) is one of the most widely used weapons in the world both for civilian and military use. Indeed, of the 500 million firearms in the world in 2004, 100 million were Kalashnikovs and 75 million of these were AK-47s.

One of the hallmarks of the weapon is its service life. This can be as little as 6,000 or as much as 15,000. The difference is because there are so many variations on the weapon, made both with the utmost craftsmanship or cranked off of assembly lines in impoverished post-Soviet nations, that it can be difficult to separate the wheat from the chaff.

Indeed, the weapon is so iconic in Russia that it is the subject of a popular joke about the future as regards the rivalry between the United States and the People’s Republic of China for world dominance: “Optimists learn English, pessimists learn Chinese, realists learn Kalashnikov.”

The History of the 7.62 Soviet Round

It all started on July 15, 1943, when the Soviet Union was in the throes of its battle with Nazi Germany. This was the day that the Technical Council of the People's Commissariat for Armaments met to discuss an intermediate Soviet cartridge, something that the Red Army sorely needed.

As dictated by the Soviet central planners, the new cartridge was to be the backbone of the Soviet military. It would be used in a light machine gun, a semi-automatic carbine and a selective fire rifle. The cartridge was designed by (what else?) a committee in conjunction with the Soviet Union’s top weapons designers. The committee considered 314 designs before narrowing the field down to eight that were actually manufactured, then tested. By December 1943, the 7.62x41, the forerunner of the 7.62x39, began production. In March of 1944, the first 7.62x39s rolled off the line.

Some of the weapon designers who worked on this round deserve mention in their own right:

At this point, the cartridge began evaluation in actual combat and training scenarios, not just theoretical testing. Initially the designers decided against a boat tail on the round. This is because they believed that it would only make a difference at very long ranges – which proved to be false. Another change was to the bullets. The length was increased to 26.8mm and the core was redesigned as lead covered with low-carbon steel.

This cartridge is comparable to the .30-30 Winchester, having a similar bullet diameter and weight. However, this comparison is not entirely accurate, as the .30-30 is able to fire heavier bullets at higher velocities. Even so, the 7.62x39 remains an effective cartridge for taking medium game as far out as 200 yards. The effectiveness of this round increases by using widely available soft point and hollow point bullets.

A major advantage of 7.62x39 ammunition is that it is available in nearly every corner of the globe. All major manufacturers of ammunition produce this cartridge, and it's easy to find as a military surplus item. Having been mass produced by the Soviets, the Eastern Bloc countries and even China, AK-47 rifles and SKS rifles have been employed in almost every part of the planet. This global availability has created massive demand for 7.62x39mm ammunition. 7.62x39 surplus ammo is especially popular, as they are comparatively inexpensive and are packaged in steel, airtight cases – which protect the ammo from moisture and greatly extend the storage life.

When asked to name a firearm chambered for 7.62x39 ammo, most shooters will respond by mentioning the AK-47 or SKS, but there are actually several other commercially available rifles in bolt action and single shot configurations. Firing military surplus ammunition from these civilian rifles will generally yield a better group than can be obtained from the military rifles. Ammunition manufacturers, however, know that this cartridge is also used in sporting applications, and they produce several options in their premium hunting lines. With the right rifle, the accuracy of these ammo options is reportedly sub minute-of-angle.

The round continues to see extensive use in the Russian military in AKM rifles and rifles derived from this model. However, despite what gun grabbers would have you believe, the round also has legitimate uses in sporting and is popular among hunters for that reason. It’s not quite as powerful as the .30-30 Win, but it has a very similar ballistic profile – which is why it’s popular for shooting, for example, whitetail deer.

What’s more, it’s a common round for AR builds. A number of companies produce AR builds accommodating the 7.62x39 cartridge, including Colt, Armalite, Olympic Arms, Rock River Arms and others. Likewise, custom builds and conversion kits are available that allow you to use the most prolific Soviet round on America’s favorite rifle.

Although there are various rifles chambered for the 7.62x39mm round, the military versions remain the most iconic, most notably the SKS and the AK-47. Beyond these rifles, Colt, Armalite, Olympic Arms, Rock River Arms, and others have manufactured firearms for the 7.62x39. Within the recent past, this caliber has become a favorite in AR-15 style guns.

While not all 7.62x39mm ammunition is corrosive, some is. If the ammo in question is a commercial ammo made in the U.S. for the civilian market, then it should be non-corrosive. On the other hand, if it’s military surplus ammo, then it is almost always corrosive. To be sure, check the ammo’s primer. If it’s a Berdan primer, the ammo is corrosive, as it leaves a residue of salt after being fired. To solve the problem, simply wash the weapon after use in hot soapy water to remove the salt and protect it against corrosion.

Although the 7.62x39mm and .300 AAC Blackout ammo are similar, there are differences between the rounds. When the U.S. developed the .300 AAC, it was in an attempt to make it ballistically similar to the 7.62 Soviet, which it succeeded at. Where the rounds differ is that the .300 has a much greater range of versatility. Commercial ammo variations can be found in both subsonic and supersonic variants, and bullets can range from 78 to 240 grain, where the 7.62 bullet weight spread is between 108-150 grain. And while the Soviet round is commonly found in FMJ, the Blackout comes in a wide range of hollow points and polymer tips.

The effective range of 7.62x39mm ammo is between 200 and 250 yards, depending on various factors.

There is a wide variety of commercial ammo available in 7.62x39mm for hunting hogs. Most agree that 123 grain is optimal, as it carries enough stopping power for a humane harvest without damaging too much of the hog. Opt for a reputable brand, such as Winchester or Federal, or a specialty round from Hornady or Barnes.

Does the Russian military still use the 7.62x39mm?

The Russian military does still use the 7.62x39mm round, although the 5.45x39mm is its standard issue.

Arsenal by Global Ordnance 7.62x39 Ammo - 1000 Rounds of 122 Grain FMJ Ammunition
based on the 2 reviews below
Add review

Kenney N.As a new gun owner, I have very little clue as to what I am doing in the grand scheme of things. However, shopping your site was easy, and the product was delivered (both of my orders, actually) in surprisingly quick fashion! You have made a solid customer out of me and my household. Party on!

“No kingdom can be secured otherwise than by arming the people. The possession of arms is the distinction between a freeman and a slave. He, who has nothing, and who himself belongs to another, must be defended by him, whose property he is, and needs no arms. But he, who thinks he is his own master, and has what he can call his own, ought to have arms to defend himself, and what he possesses; else he lives precariously, and at discretion.”James Burgh

“The tank, the B-52, the fighter-bomber, the state-controlled police and military are the weapons of dictatorship. The rifle is the weapon of democracy. Not for nothing was the revolver called an 'equalizer.'”Edward Abbey