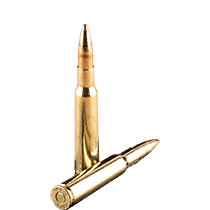 Live Inventory
Known as the 7mm Mauser, this potent cartridge has been in service with several armies, including the German Empire, Spain and Mexico. Although it's currently not active in military service, 7x57mm ammo has a strong following in hunting circles. Learn More

Mauser, the innovative firearms leader in Europe, developed the 7x57mm cartridge in 1893. Famed weapons designer Paul Mauser gets full credit for designing this ammo to use smokeless powder from the beginning – as opposed to being converted from a black powder cartridge. He made the 7x57mm for the Spanish military, and though several militaries had employed smokeless powder cartridges by 1893, the 7mm Mauser earned a level of respect never accorded to any other cartridge of the era.

This cartridge has been known over the years by several different names. 7mm Mauser is the most common, with 7x57mm in a close second. Other names include 7mm Spanish Mauser and .275 Rigby. John Rigby, a famous British rifle maker, adapted the cartridge and renamed it the .275 Rigby because he knew the British preferred to express calibers in inches rather than millimeters. But no matter what name you use, the 7x57mm has a rich history of military service.

The 7x57mm was involved in many conflicts over the course of its military service life of nearly 100 years. The assault on Santiago, Cuba, will go down among the most notable conflicts in American history involving the 7x57mm, and not for a good reason. It was in this battle that the legendary Roughriders and Buffalo Soldiers suffered 20 percent casualties, despite having a force advantage of almost nine to one over the Spanish. Later investigation gave credit to the superior firepower delivered by the Model 1893 Mauser rifle in the form of the 7x57mm cartridge as allowing the Spanish to overwhelm the attacking force.

The 7x57mm was initially topped with a bullet weighing 173 grains, leaving the muzzle with a velocity of 2,198 feet per second with muzzle energy greater than 1,850 foot pounds. The Spaniards improved the performance of the cartridge in 1913, by adopting the spitzer-shaped soft point bullet. This pointed tip bullet was lighter, weighing just 140 grains. As a result, muzzle velocity jumped to 2,790 feet per second, and muzzle energy reached almost 2,400 foot pounds. The final modification of a boat tail to a bullet weighing 162 grains produced a lower drag with a maximum range of 5,000 yards. Many shooters find that at ranges inside 300 yards, the performance of the 7x57mm is just as good as that of a .308 or .30-06, especially on medium-sized game like deer.

The 7x57 can be found chambered in commercial hunting firearms and surplus rifles. Sport shooters and hunters of medium and some large game in Europe and North America still respect and use this cartridge today.