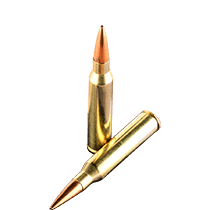 Live Inventory
The .338 Lapua Magnum is a leading sniper rifle cartridge with an effective range in excess of 2,000 yards. It is also being discovered by sport shooters and hunters who want a powerful, long-range cartridge that can take almost any game. Learn More

Research Armament Industries (RAI), an American company, was the first to introduce the concept of a long-range sniper cartridge in .338 caliber in 1983. The idea was to develop a cartridge for the U.S. Navy that was capable of extreme long-range shots against persons and material. The company Nammo Lapua Oy, commonly known as Lapua, joined the project to manufacture the casings for the ammo testing process. RAI withdrew from the program during the testing process, so Lapua started producing the whole cartridge on their own.

Distance wasn’t the only consideration when it came to developing the new sniper round. The military also sought a more powerful round that could penetrate five layers of high-tech body armor with lethal force. It was tight deadlines – and RAI’s inability to meet them – that landed this project in the lap of Lapua. Financial considerations were also a factor in RAI dropping out of the program.

While the round was developed with snipers in mind, it has found a loyal following in the civilian market as well. The 338 Lapua Mag sits somewhere between military rounds like the 7.62x51mm NATO and heavier rounds like the .50 BMG. The cartridge minimizes barrel wear, which is important for anyone shooting thousands of practice rounds per year. For its part, the National Defense Industrial Association is positioning the cartridge as a replacement to the .300 Winchester Magnum and the .50 BMG for long-range military service.

The 338 Lapua Mag was designed for anti-personnel use, but it has been used against light materiel as well. Smaller vehicles are a popular target in war for this round. Radars, communications equipment and computers have also been targeted. What’s more, the round is powerful enough to penetrate concrete and target enemy combatants inside buildings.

Lapua is the city where the cartridges are made. Indeed, this is a city that is famous for being a center of ammunition manufacturing in Finland, where the majority of the ammunition Finland used against the Soviet Union during the Winter War was manufactured, as well as the Finnish World War II effort.

It also the site of the worst accident in Finnish history, the Lapua Cartridge Factory explosion. All told, 40 workers died, most of them women, resulting in 60 children losing parents. The building was completely destroyed, and while most injured were in the building at the time, some were outside and injured by shrapnel from the explosion. Rescue efforts were hampered by a telecommunication workers strike and continuing fires in the plant, which led to more ammunition exploding without warning. It was almost 20 minutes before the injured even began transportation to the nearest hospital.

An investigation found that the explosion began with one machine starting a chain reaction. Beyond this, a definitive cause was never found. The accident was a major event in Finland at the time, with many of the funerals broadcast on television. Legal action began in 1978, but resulted in total acquittal in 1982. The factory was later rebuilt less than four miles from the city center, and increased safety measures for ammunition manufacturing were unrolled.

After the official program, Lapua collaborated with Sako and Accuracy International, two rifle manufacturers, to continue the development of the cartridge into what it is now, an incredibly accurate and hard-hitting round used across the globe by several national military forces.

Before the .338 Lapua, sniper systems had a gap between the smaller .30 caliber cartridges, such as the .308 Winchester and .300 Win Mag., and the larger caliber .50 Browning Machine Gun cartridge. The .30 caliber rifles are smaller, lighter and more portable than the big, heavy .50 caliber systems, but they lack the remarkably long reach and power that distinguishes the .50 BMG. The .338 Lapua finds the middle ground for power and portability. Rifles chambered for the .338 Lapua weigh between 12 pounds and 15 pounds on average. These are light enough to carry in the field, but heavy enough to reduce punishing recoil – even with loads meant for long distance shots.

The 338 Lapua Mag Death Ray: The Longest Shot in History

Over 30 years after its creation, this round still dominates the world of long-distance shooting. Snipers have nicknamed it the “death ray” because of its extreme accuracy and flat trajectory at very, very long distances. The 338 Lapua Mag is hard to beat in both of these respects because, unlike most other sniper cartridges, it was designed specifically for snipers in the United States Marine Corps. Not only does the round perform about as well as a 50 BMG, but it’s also far more portable – an attractive feature for military and civilian use alike.

The round had a record that stood for almost eight years – the longest-range kill in history. The honors went to Corporal of Horse Craig Harrison who consecutively shot two Taliban machine gunners at a range of 2,475 meters. It took about nine shots between Harrison and his spotter. An Apache helicopter, measuring with a laser range finder, confirmed that this was the longest-range kill in military history. While Harrison had perfect long-range shooting conditions on his side, the round’s design cannot be overstated. The British military repaid him by leaking his information and exposing him to potential Al-Qaeda kidnapping.

The military has not stopped developing this cartridge, which is the gold standard for sniper rounds. There are currently over 30 different international militaries using the round, and the next frontier is making it able to penetrate ever-tougher varieties of body armor.

Civilians are beginning to give some recognition to the .338 Lapua. It is lauded for its accuracy, and is being seen in competitions of extreme long-range targets. Large-game hunters also use the cartridge, as it serves well for taking nearly all game of medium and large size at long range. Due to the interest that the .338 Lapua has been generating in the circles of hunting and target competition, it is likely that when it eventually sees retirement from military service, civilian shooters will continue to enjoy this stellar round.

John J.Your team has done a great job and I am very satisfied with my purchase. I will keep you in mind for future purchase. Thanks!

John P.I was very happy with the website, prices, and quickness of shipping. I will be shopping here again. Thank you, Ammo.com Team.

Brenda B.I was very pleased with your service. My order was delivered quickly,and my directions followed exactly. I will absolutely be doing business with you again, and will highly recommend you to others. Thank you for your excellent service.