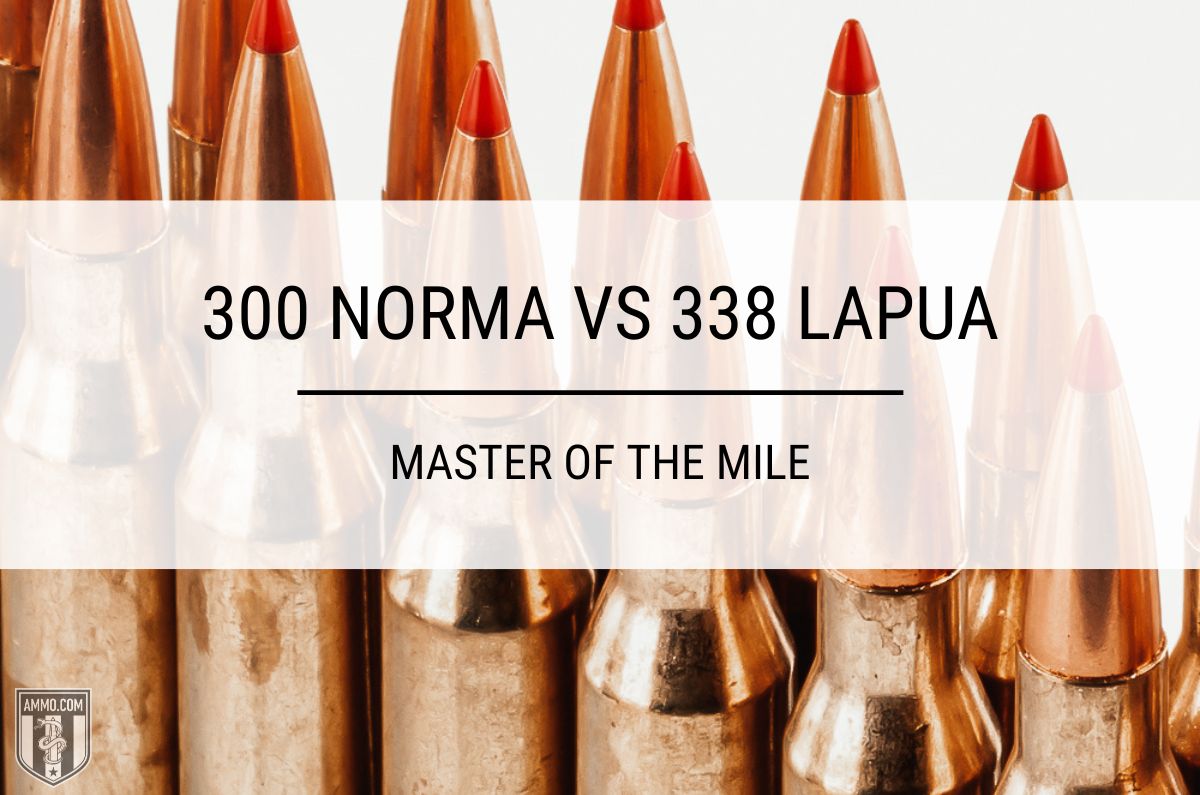 The new kid on the block vs the tried and true long-distance caliber. Since its introduction, the 300 Norma Magnum cartridge has received a lot of hype for being the new best long-range round, but how does it fair against a battle-tested caliber like the 338 Lapua?

We've compared the 300 Norma vs 338 Lapua in 11 categories to determine the master of the mile shot.

While not all the comparisons are perfectly equal, we strive to make them as similar as possible.

Keep scrolling to see if there's a new master of the mile!

When we compare these cartridges, we'll notice some striking similarities and differences.

While both calibers are extremely capable of long-range shooting in expert hands, we're here to determine which one is the best for the average person.

Let's begin with the rifle cartridge specs of each caliber.

You'll first notice that the 338 Lapua is slightly larger in all aspects.

Since the 300 NM shoots a smaller projectile, the neck diameter also needs to be smaller. 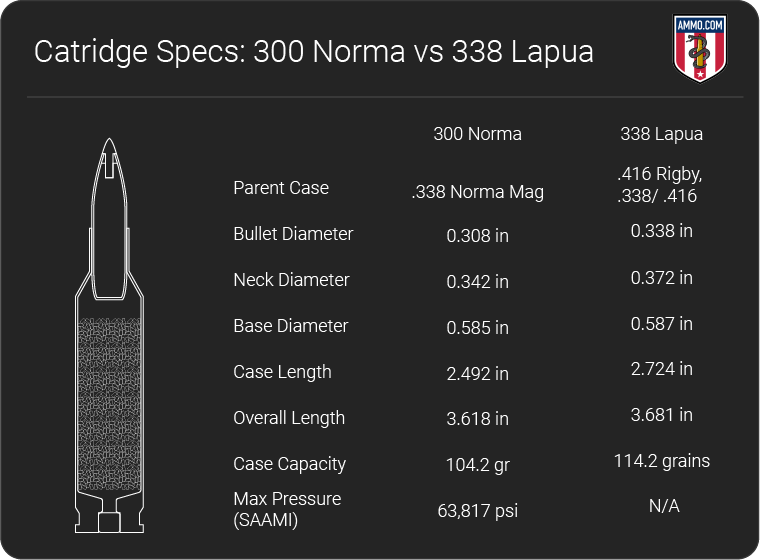 Does the larger Lapua have an advantage in shooting performance in real-world scenarios?

Recoil is the energy a shooter feels when they pull the trigger of a firearm.

We need to consider the recoil because many shooters prefer less recoil. That's why you'll see muzzle brakes on a precision rifle to reduce the recoil as much as possible without sacrificing the bullet's effectiveness.

A rifle with lower recoil is easier to handle and be more accurate with; it's also more enjoyable to shoot because you don't have a sore shoulder after a few rounds down range. 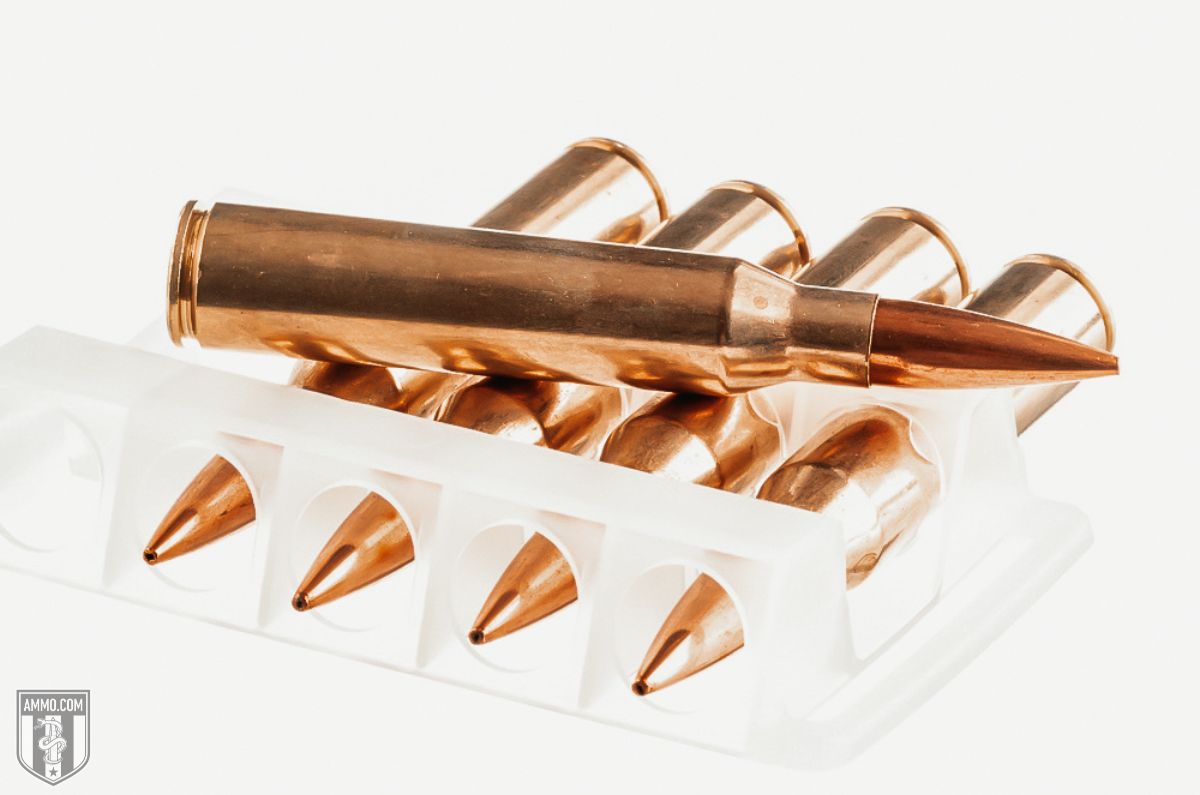 The 300 Norma Mag recoil energy is about 25.9 ft-lbs. However, that can increase to as much as 35.5 foot-pounds of energy when we increase the bullet's muzzle velocity or weight.

The 338 Lapua has a lot of felt recoil. In fact, most manufacturers install a muzzle brake to help ease the abuse the shooter's shoulder receives.

The winner is easily the 300 Norma because of its reduced amount of recoil.

There is plenty of disagreement regarding barrel life or how many rounds a barrel can handle before downrange accuracy declines.

Magnum cartridges are tough on barrels. Although the high case capacity is great for getting excellent muzzle energy and velocity, it also erodes the rifling at the chamber throat much faster.

When reloading close to max pressure, your barrel won't last as long as someone loading lower powder charges. 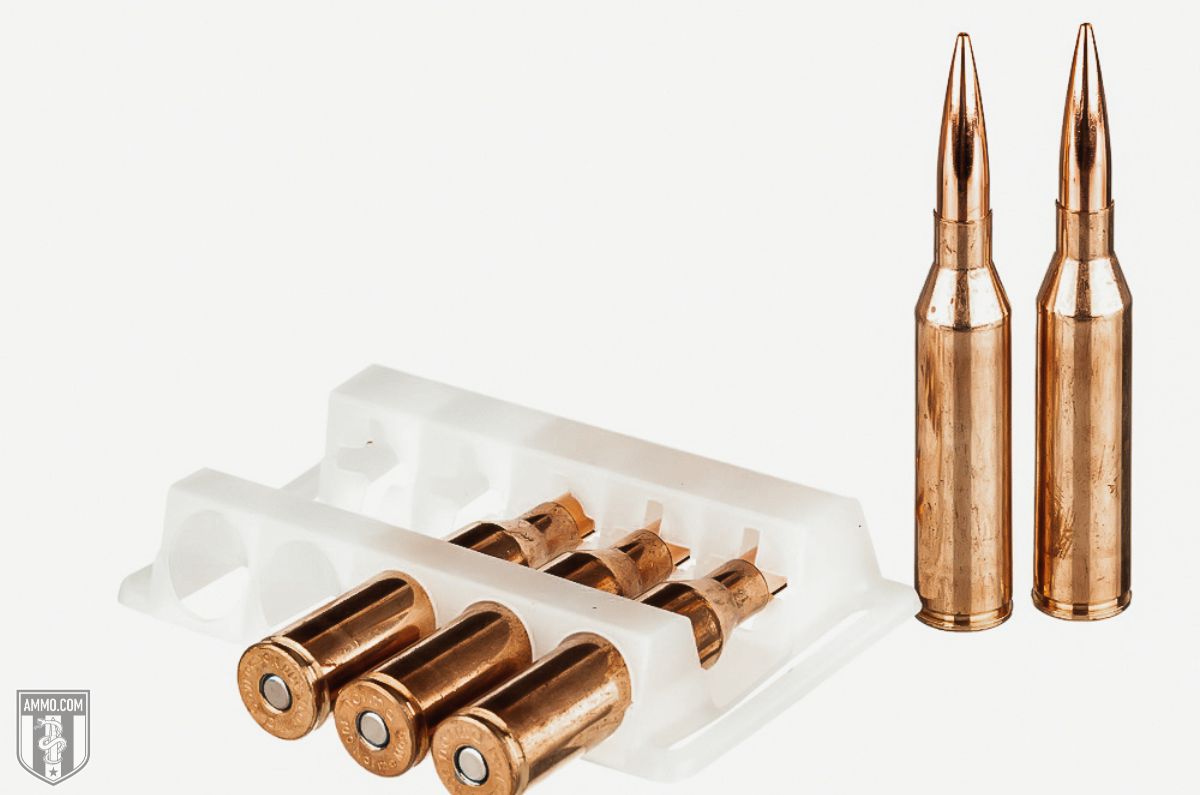 For hunters, it's doubtful you'll ever shoot enough rounds to negatively affect the barrel's rifling.

A 300 Norma Magnum barrel will maintain peak accuracy between 1100 to 1200 rounds. Because of the increased powder charge, you can expect fewer rounds from the 338 Lapua.

The real winner is the barrel manufacturers, but for the article's sake, the 300 Norma wins.

The trajectory is the bullet's path to the target. It's an arch due to gravity. Shooters prefer a flat shooting round because the flatter the trajectory, the easier it is to be accurate at long distances since you don't have to compensate for as much bullet drop.

Both calibers have a flat trajectory because they are designed for long-range shooting purposes, but which is the flattest? 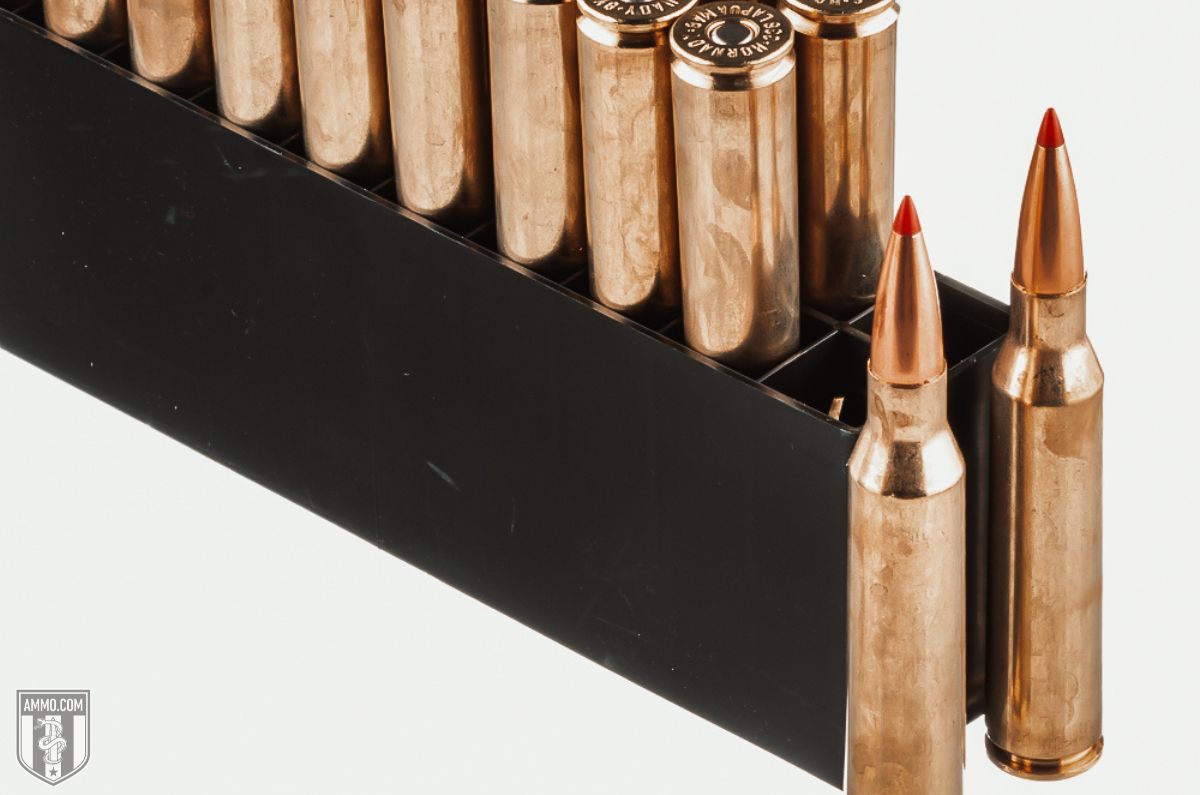 The heavy bullet of the 338 Lapua brings it back to earth quicker than the 300 Norma.

The 300 Norma has a slightly flatter trajectory.

Accuracy is a fickle concept because many factors determine the accuracy of a round. The gun, recoil, trajectory, and shooter are the primary ones we will consider.

For the sake of argument, let's say we found nearly identical guns capable of accurately shooting the rounds, and we used the same shooter.

That means recoil and trajectory would be the two most significant contributing factors.

Judging solely by which caliber has less recoil and a flatter trajectory, the 300 NM will be the most accurate.

I'm not saying the 338 Lapua isn't accurate because it is one of the most accurate rounds in history. It's just at a disadvantage when pitted against the 300 NM.

The 300 Norma wins this section.

The ballistic coefficient (BC) measures how well a bullet fights the wind.

It's a measure of the aerodynamics of a bullet. A high BC is preferred because the bullet will resist wind drift better. 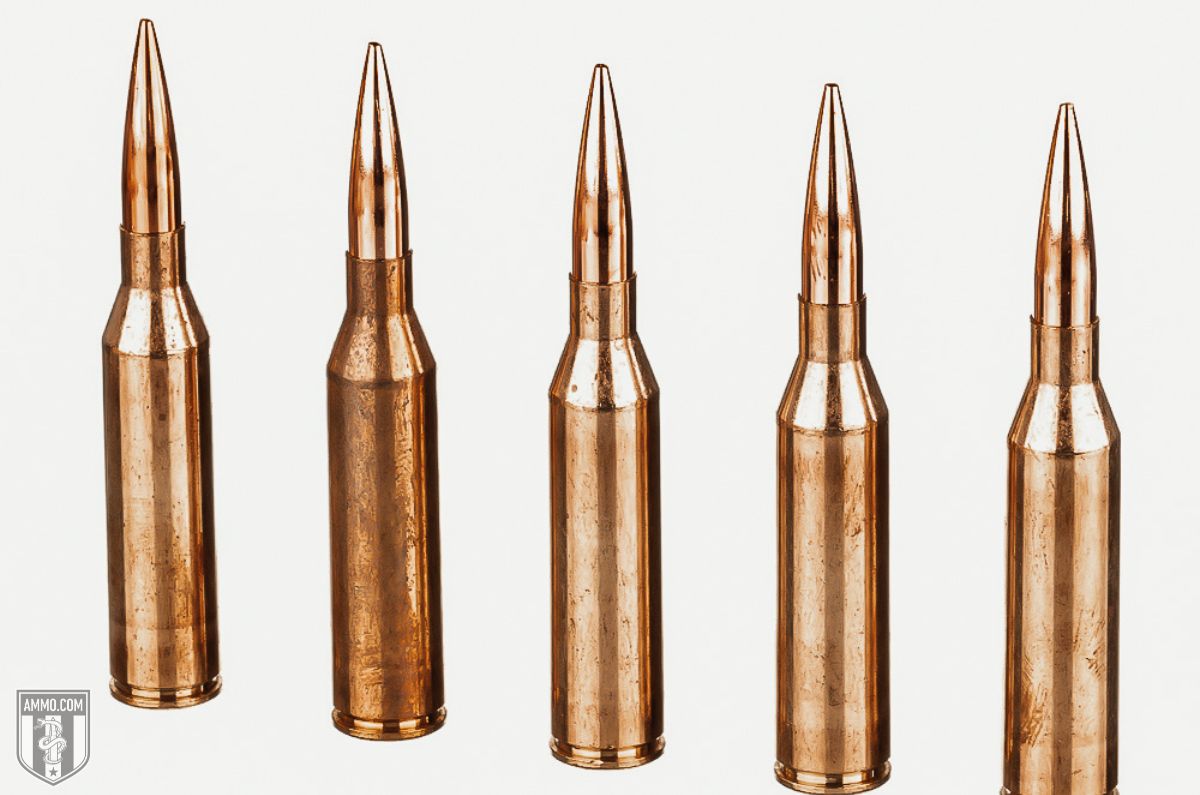 Because the 338 Lapua fires heavier projectiles than the 300 NM, it will have a higher BC. A 300 grain Nosler Custom Competition 338 Lapua round has a BC of 0.8

The 338 Lapua is on the board; it wins this section.

The sectional density (SD) measures the ability of a bullet to penetrate a target. This is extremely important when hunting big game because you need a bullet that can puncture through thick hide, bone, and sinew to have an ethical kill.

Sectional density is partly calculated by comparing the bullet diameter and the bullet weight. The higher the SD, the better the bullet penetrates the target.

Some would argue that stopping power doesn't matter with a well-placed shot. 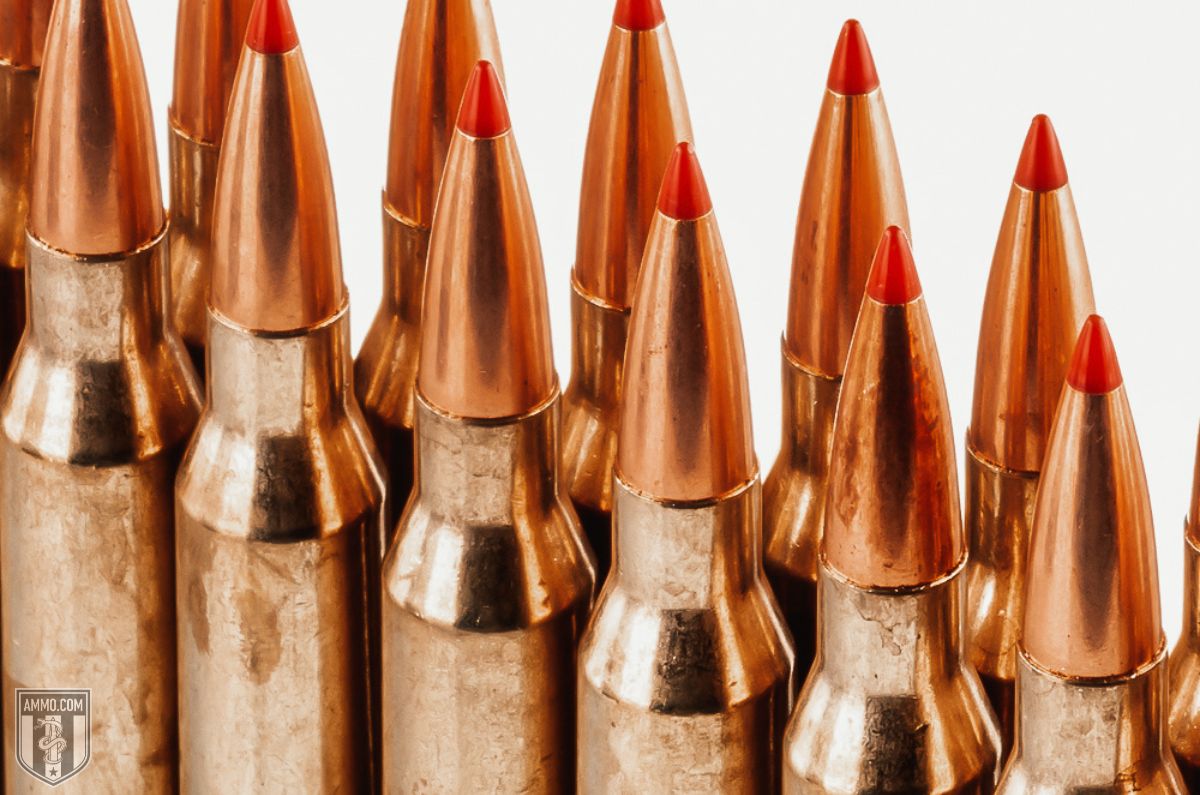 I would agree, to a point. However, not all shots are well-placed because, in hunting situations, the conditions are rarely perfect. So having a bullet with more stopping power is critical in those circumstances.

The winner is the 338 Lapua because of its heavier bullets; it will have a higher sectional density.

While neither of these calibers was designed with hunting in mind, they can be used for big game hunting for animals like elk, moose, bear, and caribou.

However, there are much better options if you plan only to hunt with the rifle. The 300 Win Mag is a much better choice for hunting.

Both these calibers are extremely expensive to shoot, and the guns are costly, so carrying it through the woods where the potential to scratch it is increased doesn't sound like a good idea to me.

This section is a draw because both rounds are capable of hunting a wide variety of big game animals, but neither is ideal.

Because these firearms were intended for long-range shooting, it makes them a poor choice as a home defense weapon.

Instead, I recommend using a shotgun like a 12 ga or 20 ga or a semi-auto pistol chambered in 45 ACP or 9mm.

The reason these rifles are poor home defense weapons is that they're bolt-action rifles, and they're prone to overpenetration. 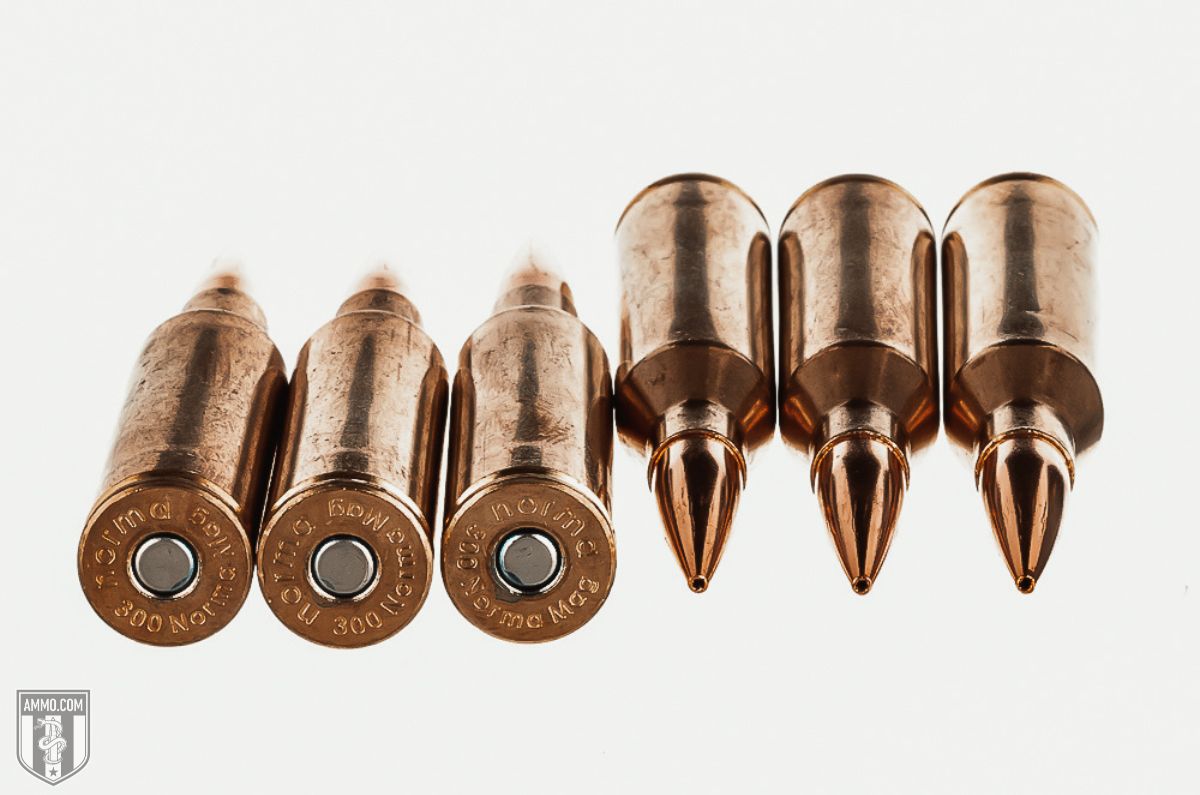 Overpenetration puts your family and neighbors at risk because the bullet can travel through multiple walls before it stops. Since we can't see what's behind the wall, it's best not to risk it; unless it's your only option.

The only time I would use a long-range rifle for self-defense is if it's the only firearm I had available, or a zombie horde is approaching from a distance.

Long-range target shooting is an expensive hobby. High-quality, competitive rifles cost thousands of dollars, and factory ammo is incredibly high-priced, which is one reason why most competitive shooters handload.

Because both rounds are specialized, not as many manufacturers, make ammo for these calibers, which drives the price up and the availability down.

The leading ammo manufacturers for the 300 Norma are Berger, Federal, and Norma Ammunition.

One round of Berger Match Grade Ammunition 300 Norma Magnum 215 Grain Hybrid Target will cost you $6.00 if you can find it.

The Hornady Precision Hunter 338 Lapua Magnum 270 Grain ELD-X Ammunition costs $6.50 per round at the time of this writing.

Major manufacturers like Hornady, Federal, Remington, and Nosler make ammo for the 338 Lapua. 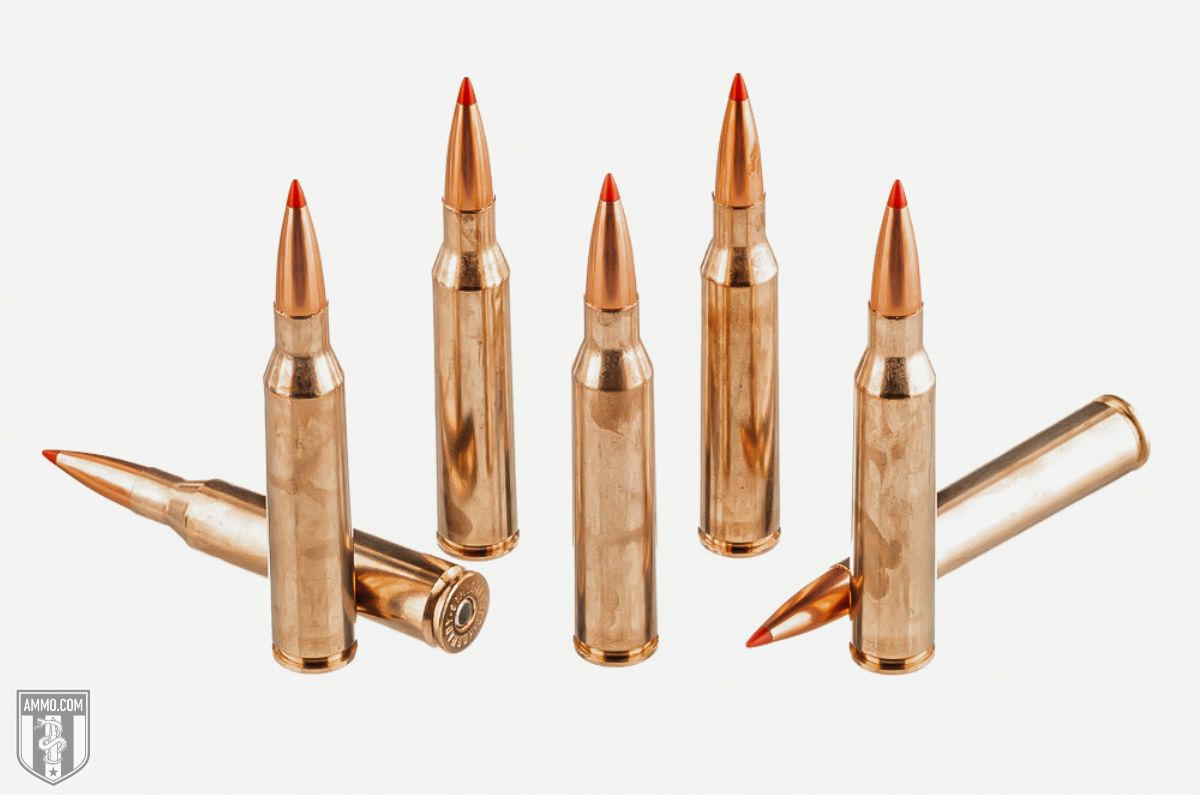 This category is a toss-up because 300 Norma is typically cheaper; however, it's much harder to find.

This is another category that gives spouses of long-distance shooters nightmares.

Most 300 NM rifles are custom built, skyrocketing the price from hundreds to thousands of dollars.

I'm afraid it doesn't get any better for the 338 Lapua.

The 338 Lapua requires reinforcement in the action to handle the increased pressures and recoil that the cartridge produces. This means more material and increases the cost.

This section is a tie because no matter which one you choose, you'll be spending thousands of dollars on a rifle. 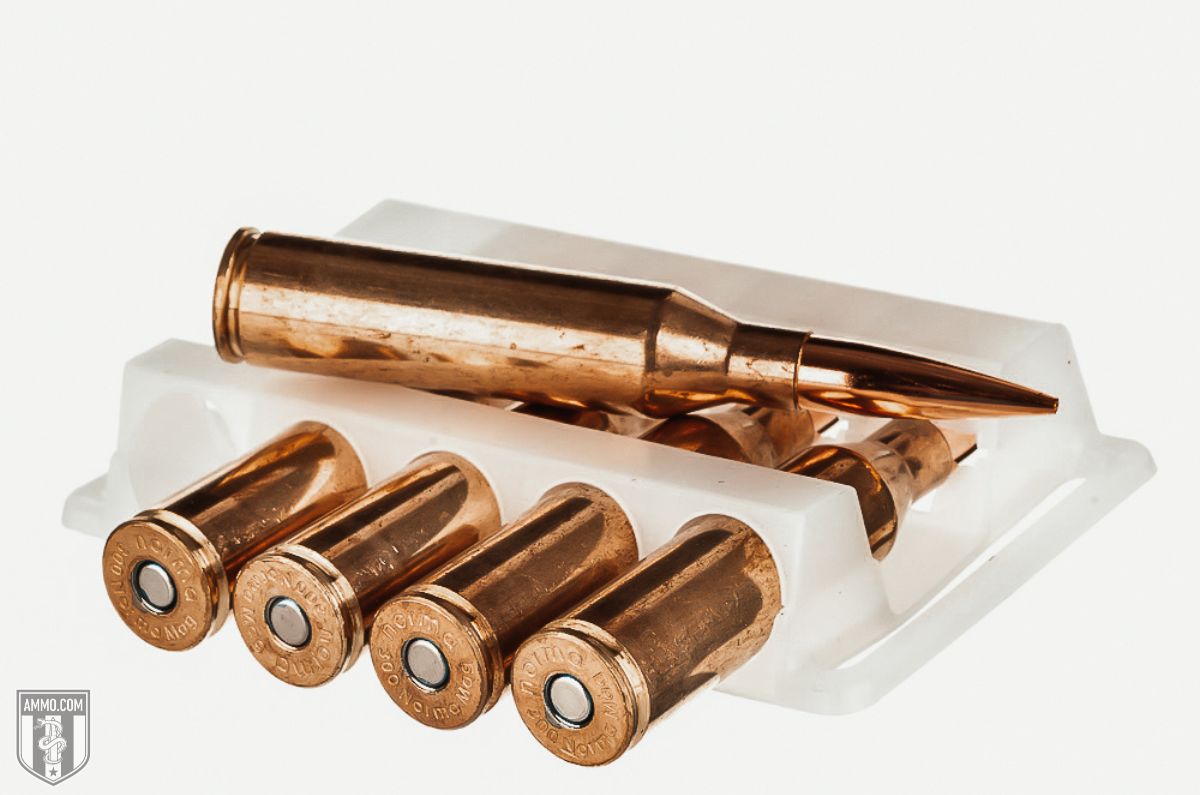 Reloading is a way to save money and get better results than factory ammo.

Even if you buy 338 Lapua ammo in bulk, you can save money by reloading the brass once you've used it.

Handloading is the best way to control the variables within your ability to control; this is why precision shooters always prefer handloading their ammo over factory ammo.

They need to be able to replicate the same shot multiple times consistently, and the best way to do this is to fire ammo loaded the exact same.

The 300 NM and 338 Lapua are both reloadable, meaning you can find the equipment and supplies you need to reload them.

This last section is a tie because Lapua brass, norma brass, and all the other reloading supplies are available for purchase. 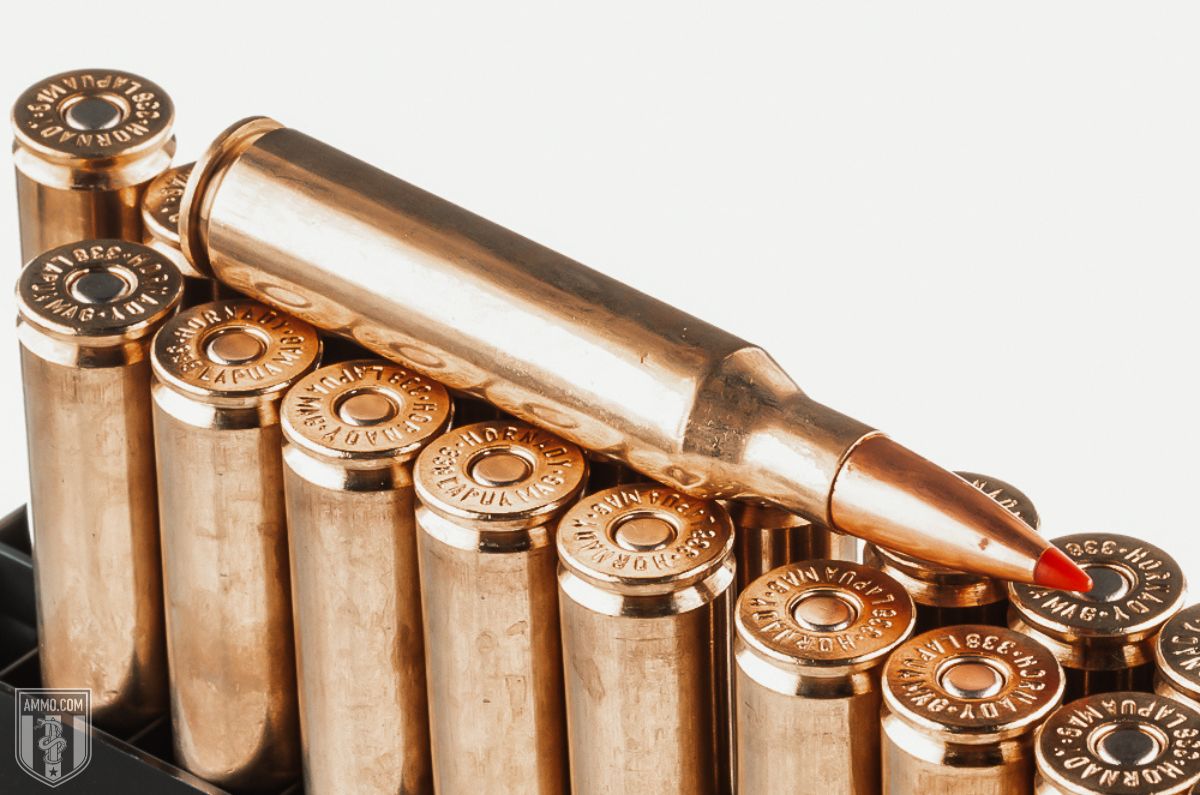 The 300 Norma Magnum is a relatively new cartridge since it was released in 2012 by Norma Ammunition. Its parent cartridge is the .338 Norma Magnum (a wildcat cartridge of the 338 Lapua Magnum) necked down to accept .30 caliber bullets, which explains why they're similar in many ways.

With the ballistics it produces and the backing of the US Military, this caliber is here to stay for many years.

Research Armament Industries (RAI) started the development of the 338 Lapua Mag in 1983. They wanted to create a cartridge that fit the gap between the 300 Winchester Magnum and the 50 BMG.

At first, they tried to use the 416 Rigby as the parent case by necking it down to accept 250-grain bullets from Hornady. However, the 416 Rigby case was not strong enough to handle the needed pressures to reach the ballistic goals of the round.

By 1984, RAI was under pressure from the military to finish the round, and in desperation, they reached out to Lapua, the Finnish ammo company, for assistance. RAI had to drop out of the program because they had too much debt. So Lapua engineers held the fate of the new cartridge.

The ballistics team at Lapua joined forces with Sako and Accuracy International to redesign the 416/338 case to handle 60,000 psi. 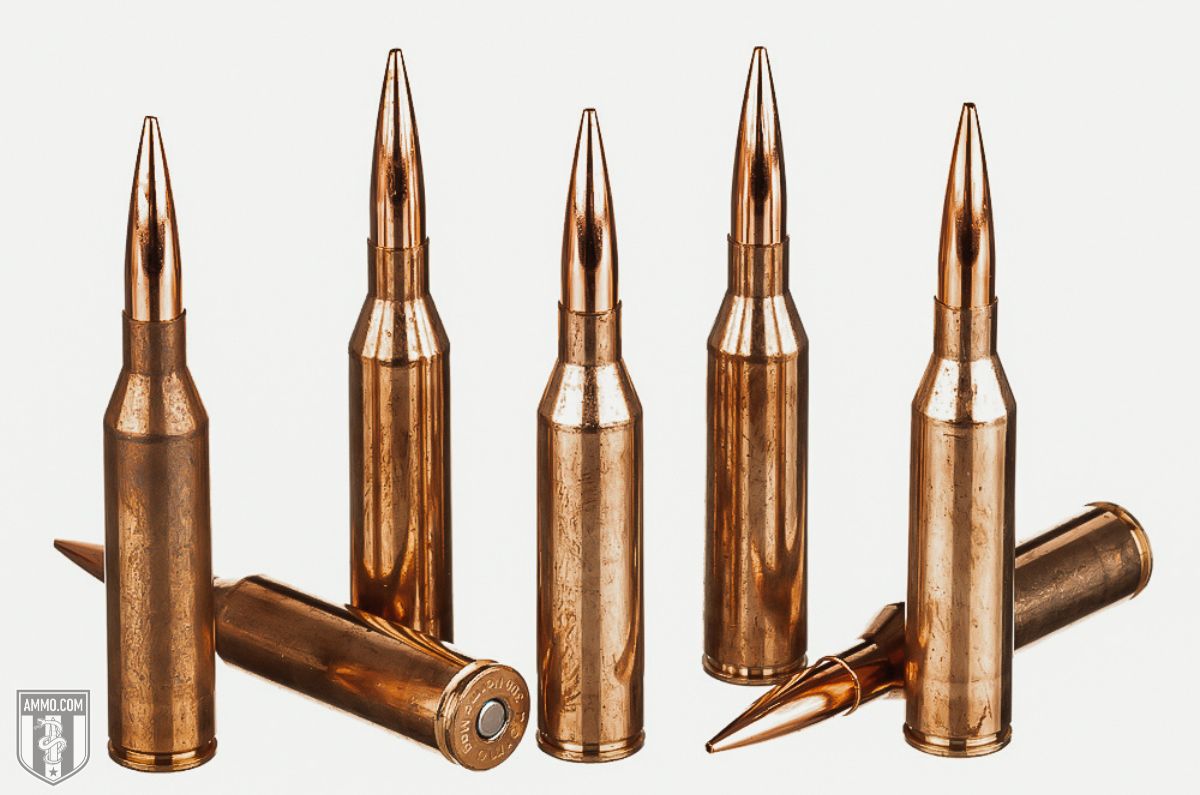 The final case design achieved velocities just short of the initial 3,000 fps goal while maintaining the needed pressure resistance. The decision was made to use the new LockBase B408 FMJ instead of the Hornady bullet.

In 1989 the 338 Lapua Magnum cartridge was accepted by the CIP (the European version of SAAMI); it became a NATO cartridge shortly later.

The 338 Lapua Mag is a powerful round that will hold its own against the 50 BMG for years.

Before you rush out and buy a 300 Norma, the 338 Lapua barely lost most of the categories, and it mainly boiled down to having more kick than the 300 Norma.

If you can handle the extra kick, the 338 Lapua is an excellent choice.

If you prefer to have a little less recoil, the 300 Norma mag is the caliber for you.