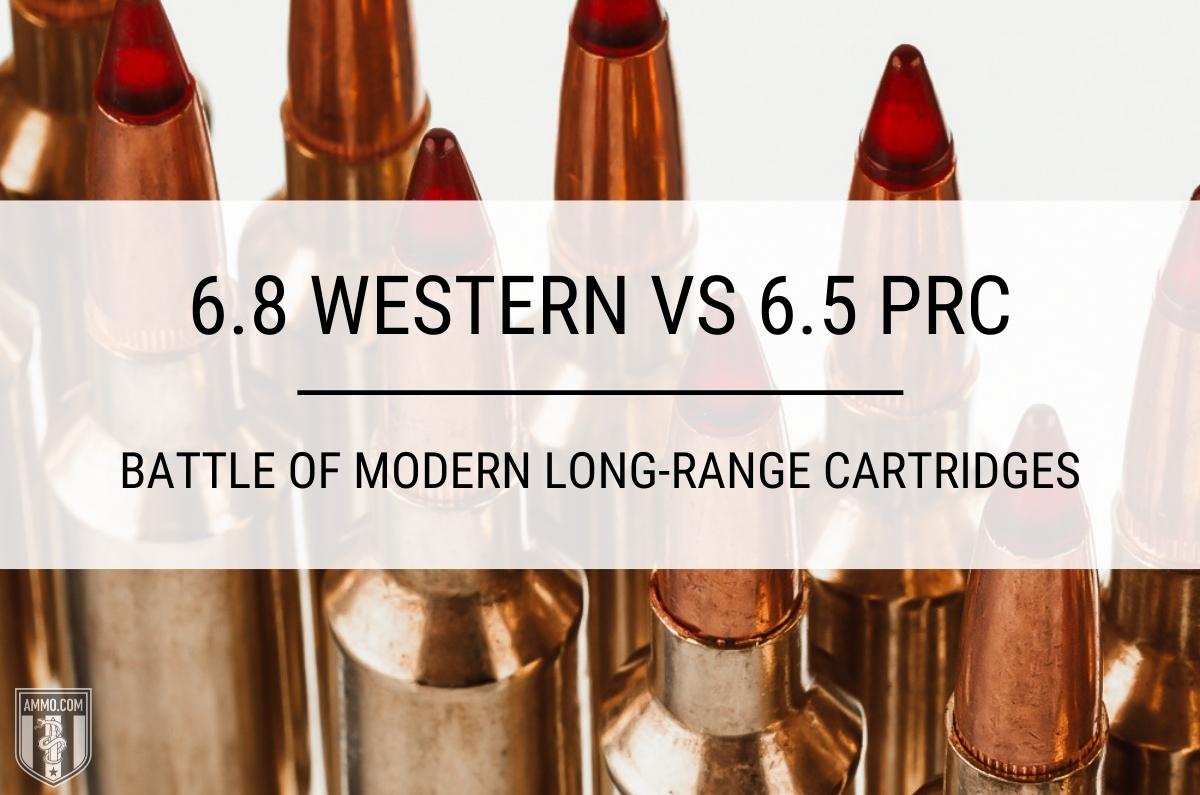 Long distances shooting has increased in popularity in the last few decades, which means an increase in better equipment and rounds.

The 6.5 Creedmoor has dominated the long-range discussion for years, but we're here to talk about the two newcomers that have begun to gain a following.

The 6.8 Western vs. 6.5 PRC debate is one of the hottest topics in long-range shooting, even though these are new rounds to the market.

Keep scrolling to find out which one will suit you best.

Judging by appearances, there's not much difference between these two rounds.

However, as we discuss the following sections, you'll begin to see what makes these calibers unique and understand what situations one shines over the other.

However, there are a few ways to tell the cartridges apart. 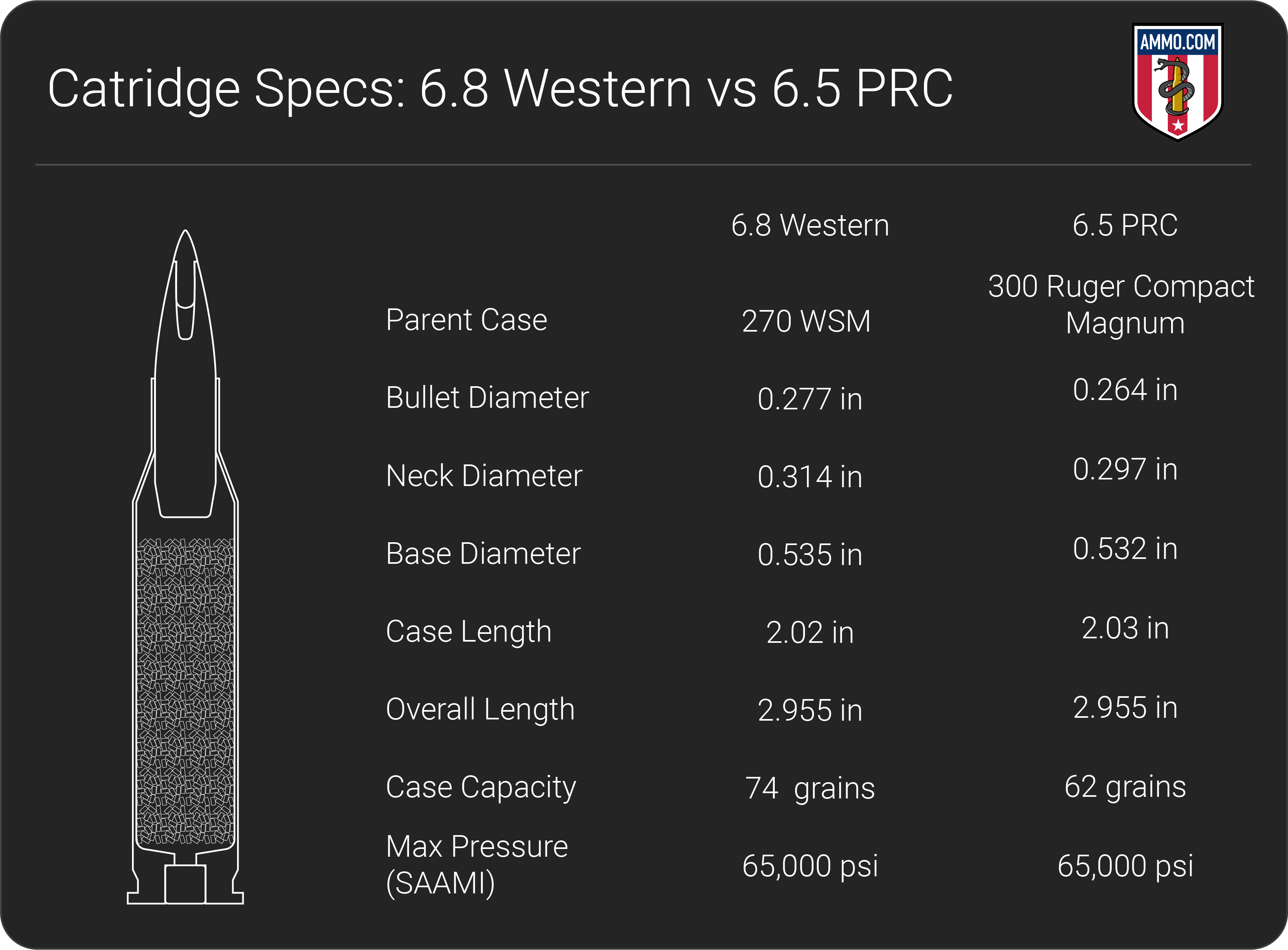 If you plan to shoot these rounds during the same trip to the range, be extremely cautious on what round is going into what gun since it would be easy to place the wrong cartridge in the wrong gun.

Despite having differing case capacities, the SAAMI maximum pressure for both is 65,000 psi, which will propel the bullets at incredible speeds.

Now that we know some of the specs let's see how they affect the performance of each caliber.

Felt recoil depends on several factors. The gun, bullet weight, powder load, and shooter all have a part to play.

The 6.5 PRC round has noticeably less recoil than the 6.8 Western cartridge. 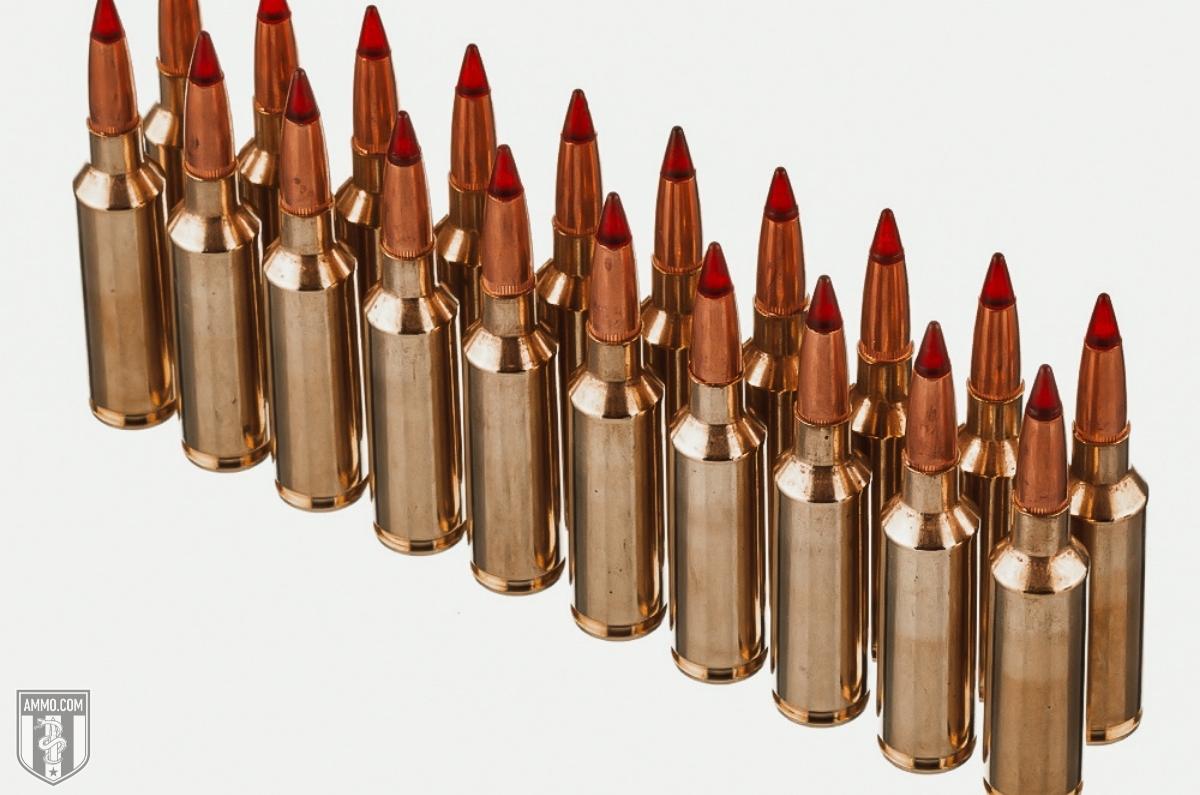 This is due to a few factors, including increased bullet weight and case capacity.

Even though these rounds look similar, the 6.5 PRC has significantly less recoil than the 6.8 Western and easily wins this section.

The bullet's trajectory plays a vital role in long-distance shooting and hunting.

I've never met a shooter who doesn't prefer a flat shooting round over a bullet with more of an arch.

A flat trajectory is crucial for long distances because you won't need to compensate as much for bullet drop.

To be fair, the bullet's weight and shape significantly affect the trajectory. Keep in mind that the 6.8 Western is a heavier bullet, so gravity pulls it down much quicker.

The 6.5 PRC also wins this category. 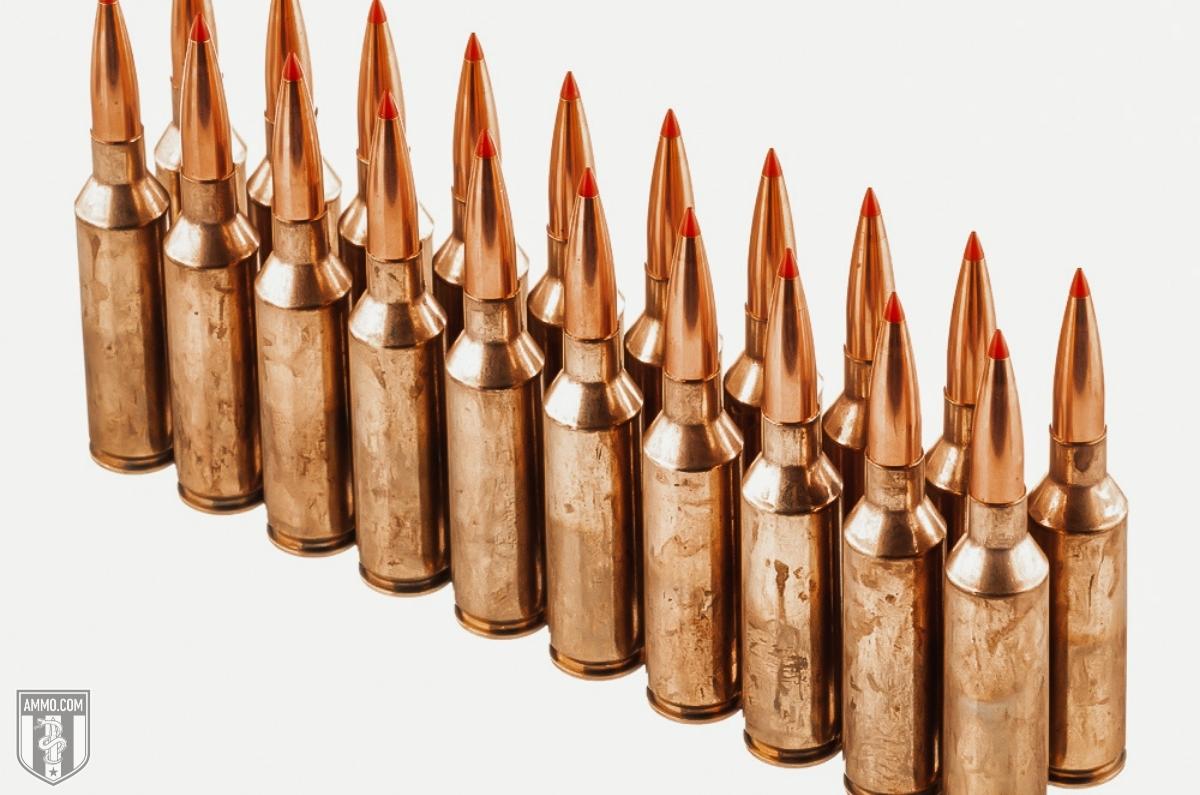 The accuracy of these rounds largely depends on the rifle, shooter, and quality of ammo.

Several years ago, I sighted in a rifle for my grandpa, only to have him pick it up and not be on the paper.

I loaded it and shot several groups of three touching, so he resighted it in for himself and did the same.

Another time a buddy was sighting in his new 300 Blackout. He would get two close, and then the third wouldn't be on the paper.

I tried, and the same thing happened. So he called the guy who he bought the ammo from and discovered the rounds were cheap, only designed for plinking at close ranges.

He bought some high-quality ammo, and we were quickly driving tacks.

I tell you those stories to emphasize that accuracy varies greatly between rounds of the same caliber.

Both of these rounds were designed for long-distance shooting and are very accurate.

If I have to give an edge to one caliber, it would be the 6.5 PRC because it shoots at a flatter trajectory, so it will be easier to be more accurate at farther distances. 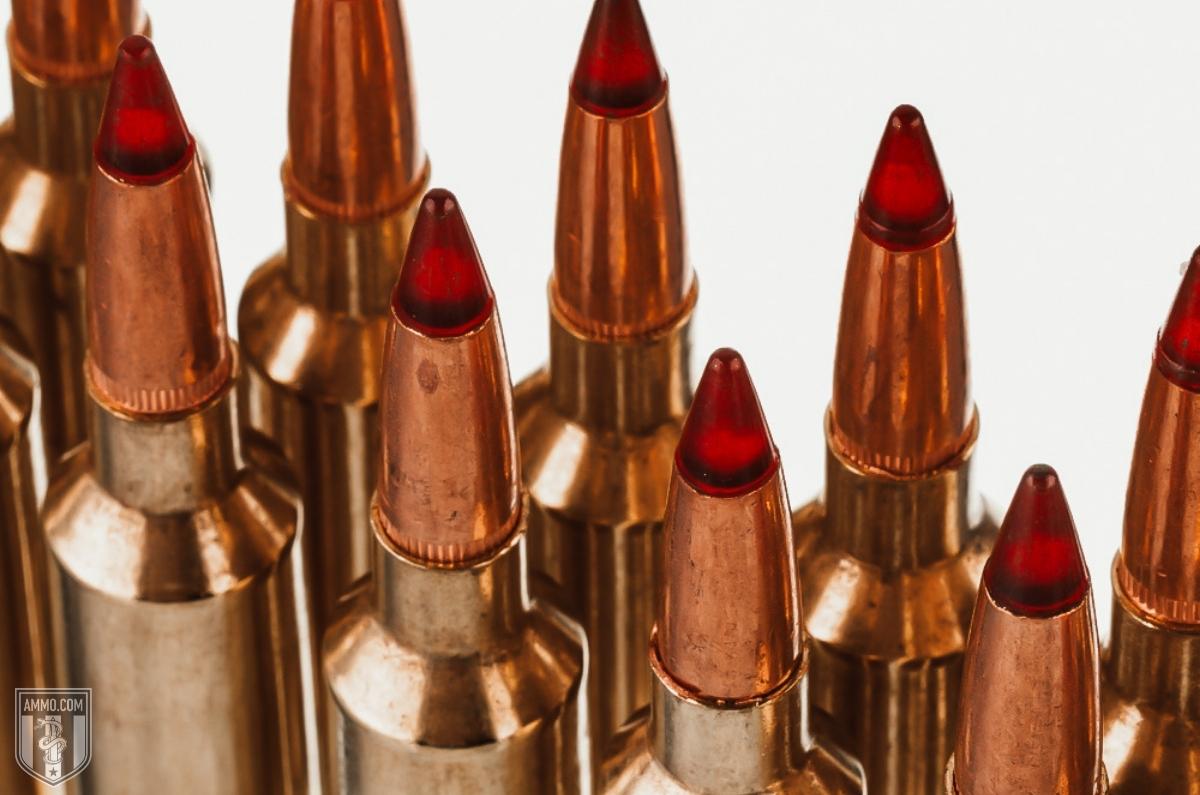 The ballistic coefficient (BC) measures how well a bullet fights air resistance and wind drift. To say it the gun nerd way, it's a numerical expression of the aerodynamics of a bullet. Most shooters prefer high BC bullets that will shed the wind easier, so it should be more accurate.

Heavy bullets will generally have a higher BC because it takes more force to change the flight of a heavier bullet than a lighter one. The ballistic coefficient varies based on bullet design, weight, and other factors that we don't have time to discuss in this article.

Depending on the ammo you purchase, you can expect the BC of the 6.8 Western caliber to be around 0.620.

Surprisingly, the BC of the lighter 6.5 PRC bullet will be around 0.625. This is slightly more, but I doubt you will notice much difference.

The winner by another narrow margin is the 6.5 PRC.

Many will argue that stopping power doesn't matter because a well-placed shot will do the job.

I agree; to a point.

Stopping power still matters because not every shot is well placed. 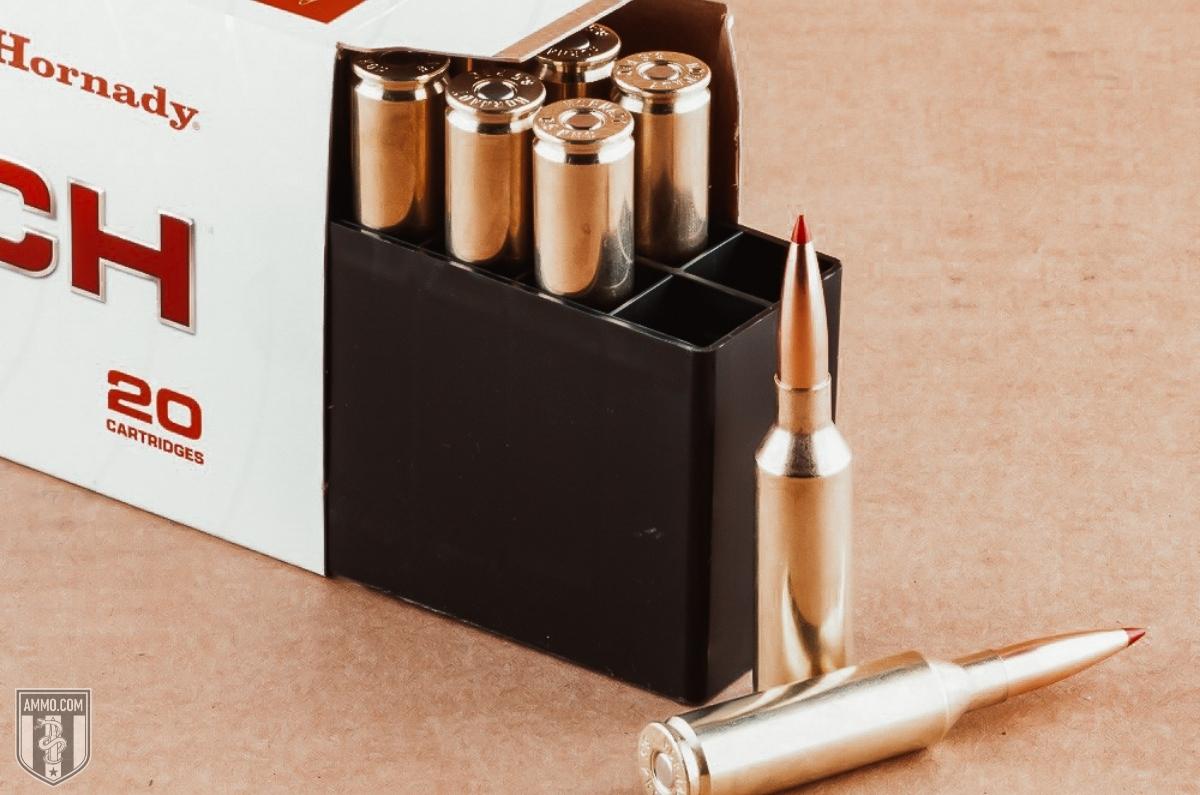 These rounds were intended for long-range shooting so that a tiny miscalculation will be the difference between a well-placed shot or a poorly placed shot.

The stopping power is primarily determined by bullet size, velocity, and jacket type.

The larger the bullet, the more force it will require to stop it, and it will leave a bigger hole.

Though, there are instances when a faster traveling smaller bullet can do more damage.

A bullet designed to expand on impact like a soft point (SP), ballistic tip, or jacketed hollow point (JHP) will have less penetration than a full metal jacket (FMJ), but depth of penetration doesn't always result in stopping power.

When it comes to these two rounds, the edge goes to the 6.8 Western. It fires larger bullets of various jackets at equivalent velocities.

However, both rounds can ethically harvest big game, which we will discuss next.

Both calibers are excellent calibers for hunting. The 6.8 Western was primarily designed with mule deer hunting and elk hunting in mind. 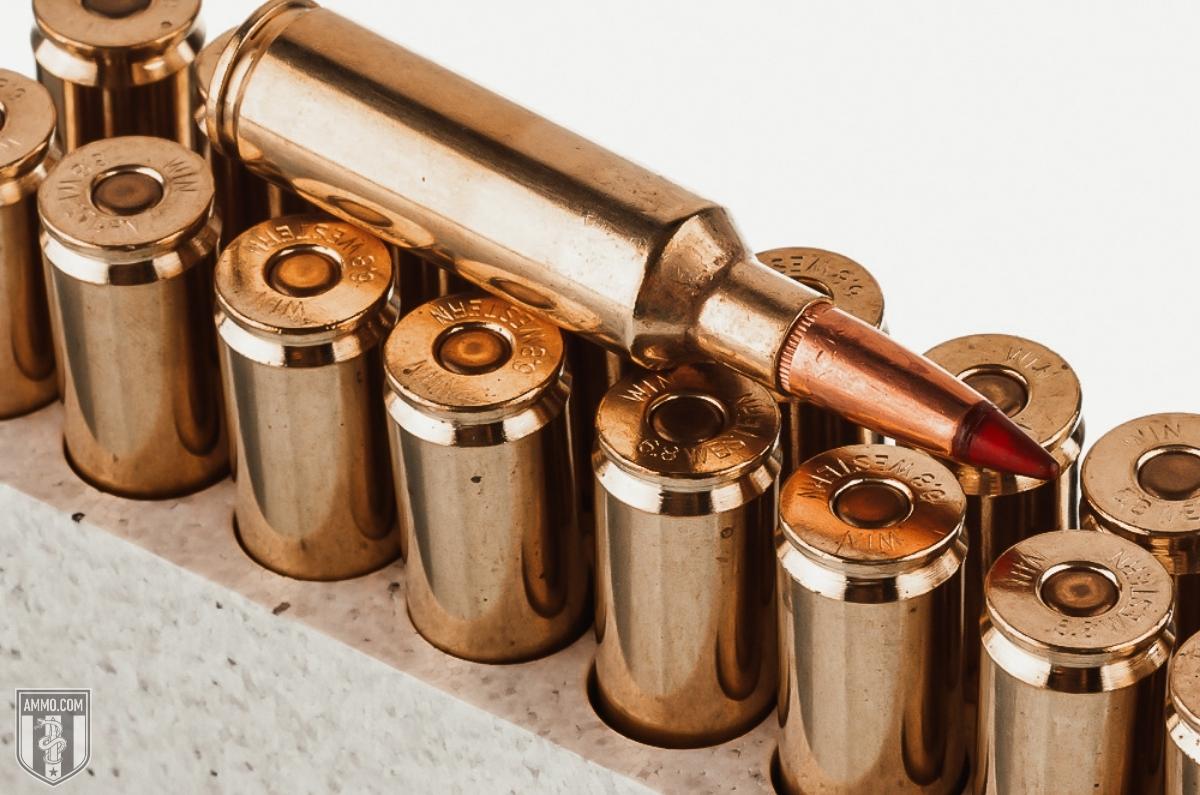 The long-range capabilities of each caliber give hunters the ability to take longer ethical shots.

While I don't see either of these calibers overtaking the .270 Winchester for whitetail deer hunting.

These calibers are a better choice for long-range hunting like elk hunting and pronghorn hunting which often require shots over 200 yards.

But which one is best?

If the recoil of the 6.8 Western doesn't bother you, I would recommend it.

However, if you're more sensitive to recoil, I would recommend the 6.5 PRC because you'll be less likely to jerk the trigger while hunting, which will result in better shot placement.

Plus, you're not giving up much knockdown power.

If you plan on big game hunting for moose, the 6.8 Western will be the better option because of the availability of heavier bullets.

In my opinion, the winner is the 6.8 Western hunting cartridge because you can hunt a wider variety of animals with it.

I don't recommend using either caliber for self-defense or home defense because of overpenetration.

In the terrible circumstance that someone enters my home to harm my family, I won't be reaching for one of my hunting rifles. 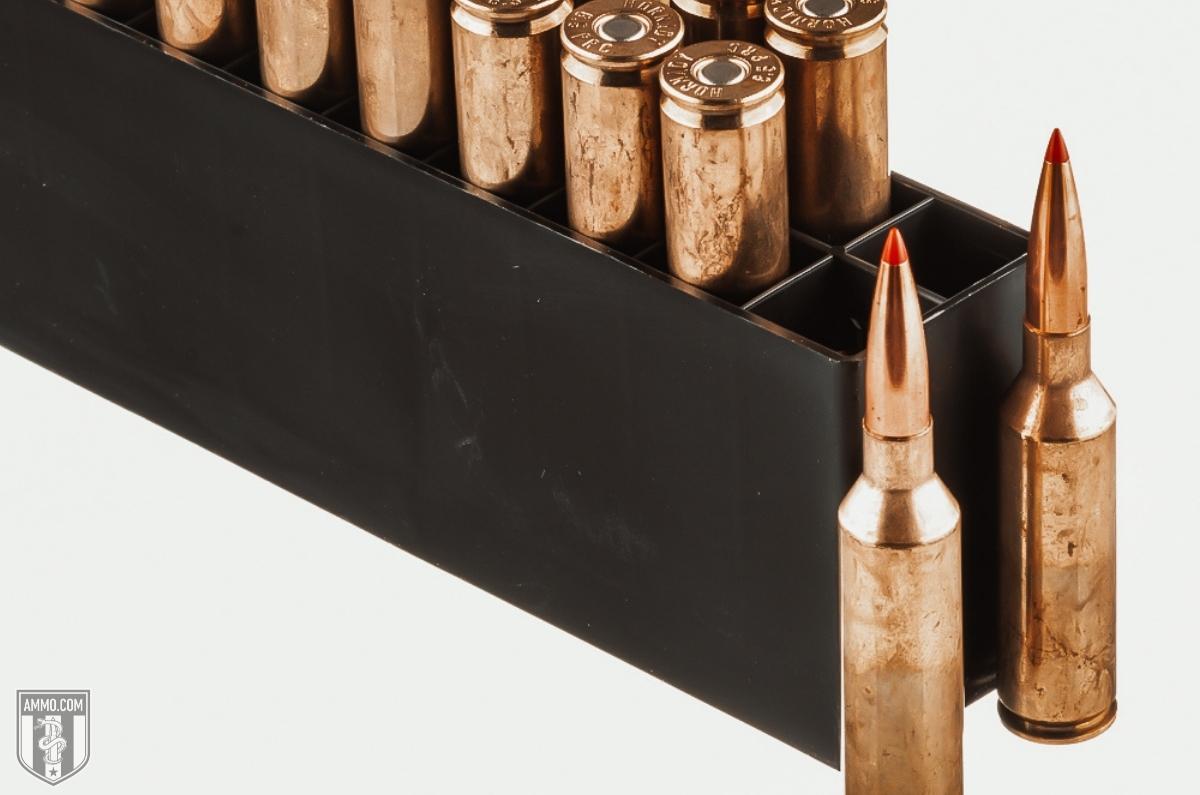 If you only have a rifle chambered in one of these calibers available to you to defend yourself, then, by all means, use it! However, there are much better options.

I prefer a 12 gauge or 20 gauge with 00 Buck for home defense because it's less likely to penetrate walls and hurt your family or neighbors as a rifle round can.

The 6.5 PRC and the 6.8 Western are not suitable home defense calibers because they're chambered in bolt action hunting rifles, so this section is a tie.

The main problem with new rounds is the availability of ammo. Since, they're not as popular as a 6.5 Creedmoor or 30-30, not as many ammo manufacturers make ammo in these calibers.

However, I suspect that to change as the popularity of each round continues to increase.

As of this writing, Winchester and Browning are the only ammo companies that make 6.8 Western. 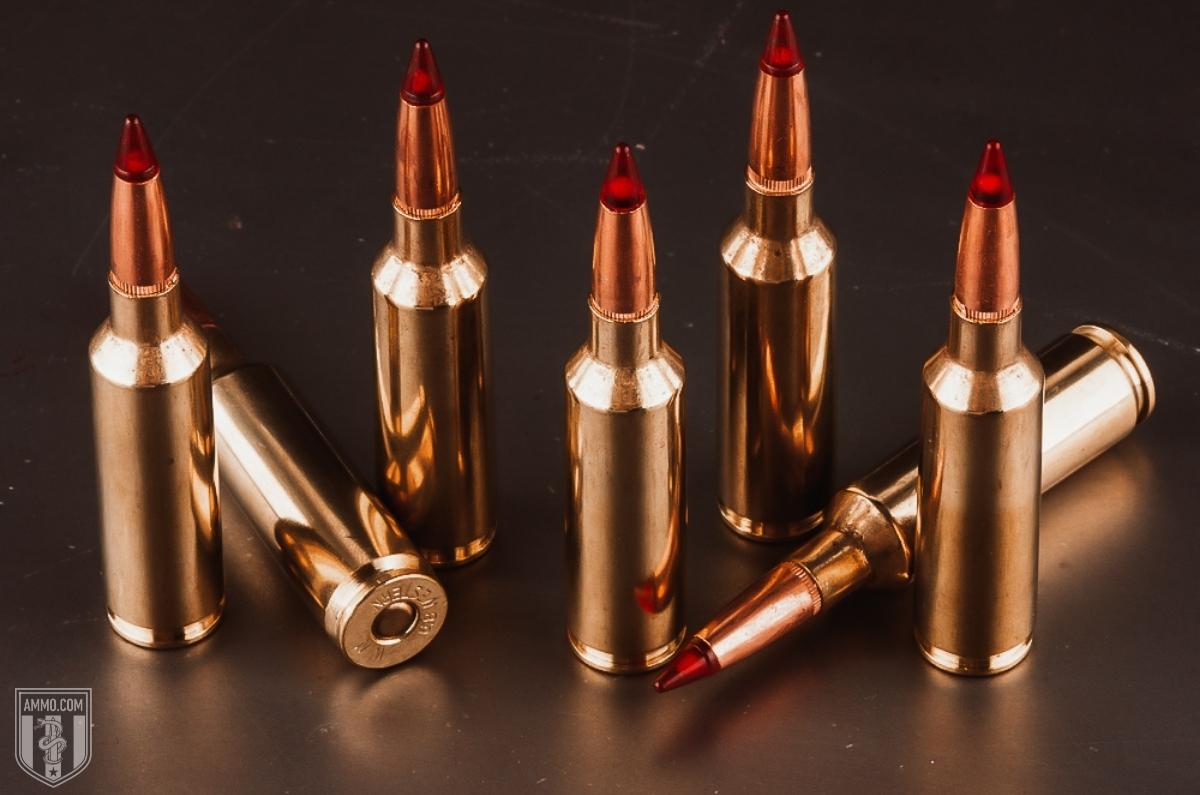 Since the 6.5 PRC is a few years older, more ammo is on the market. Ammo makers like Hornady, Winchester, Nosler, and Norma all make various grades of 6.5 PRC.

Once again, the 6.5 PRC has a slight edge. I suspect this edge will dwindle as more hunters use the 6.8 Western.

6.5 PRC rifles are not unreasonably priced. They're actually much cheaper than I expected since this rifle cartridge was recently introduced.

Of course, if you're planning on using this caliber for long-range competitions, you're going to spend much more than what these hunting rifles cost, but plenty of rifles are available.

As the interest in the 6.8 Western caliber increases, more manufacturers will begin making rifles chambered in 6.8 Western.

For now, though, the 6.5 PRC has the upper hand in this section. 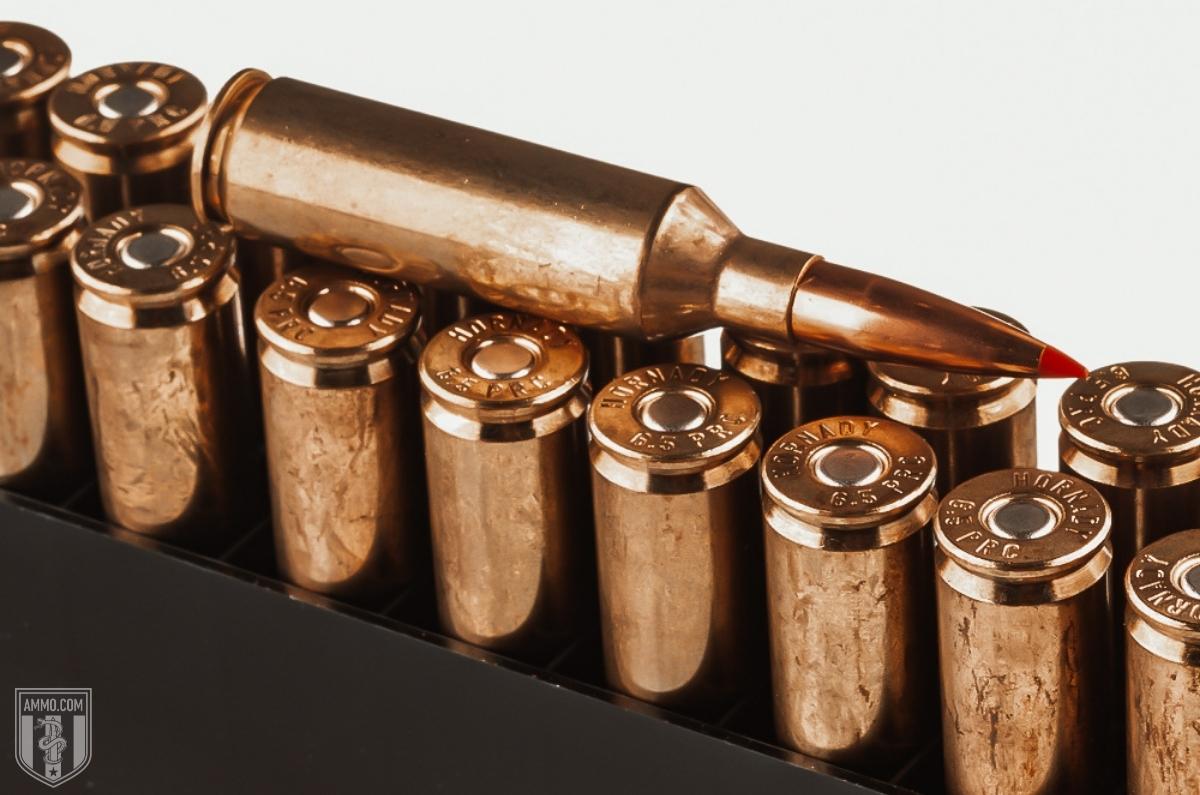 Reloading is one of the best ways to save money on factory ammo.

It also gives you the ability to control the controllable variables, which means you can craft the perfect round for your gun.

Both calibers are reloadable. Meaning reloading equipment, such as the reloading dies, ammo components, and handloading information, are available to the public.

The 6.8 Western has a few projectiles to choose from, like the 165-grain Nosler AccuBond Long Range, 150-grain Sierra GameKing spitzer boattail, or 136-grain Federal Terminal Ascent.

The 6.8 Western ballistics and the 6.5 PRC ballistics are similar enough that the average shooter won't notice much difference.

The ballistics will vary depending on several factors, including bullet weight, shape, and barrel length.

The ammo box will list general ballistics for the caliber. 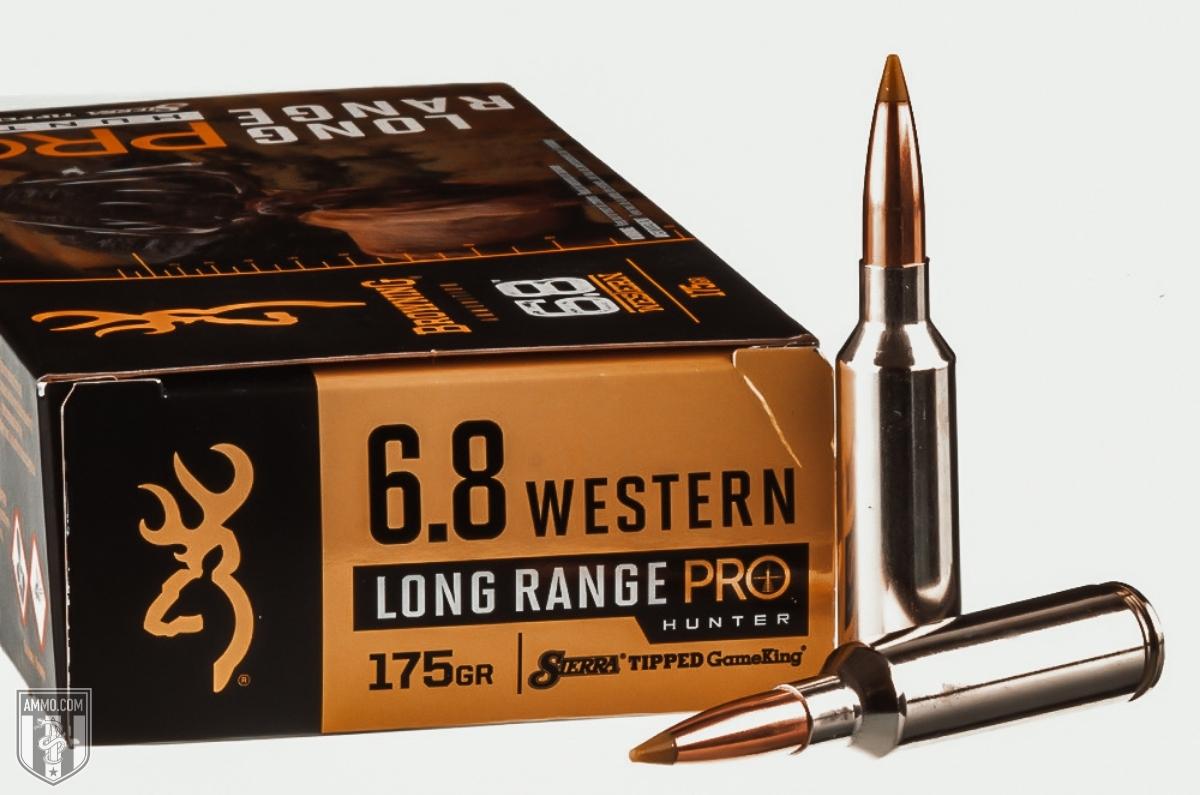 The .270 WSM fell short in a few key areas, primarily the lack of twist rate in the rifle barrels, so Winchester and Browning set out to improve it with a new cartridge that could handle a faster twist.

They accomplished that with the 6.8 Western and released it in 2021. They initially received a lot of criticism for introducing a new caliber instead of increasing the production of their other calibers.

However, that criticism has waned, and the popularity of 6.8 Western caliber bullets is beginning to take off amongst long-range shooters and hunters.

Introduced at Shot Show in 2018, the 6.5 Precision Rifle Cartridge was based on the .300 Ruger Compact Magnum.

The 6.5 PRC is designed for short-action rifles but maintains incredible performance.

Like the 6.8 Western, the 6.5 PRC is still growing in popularity and has not fully established itself amongst other calibers.

However, it is making a name for itself. 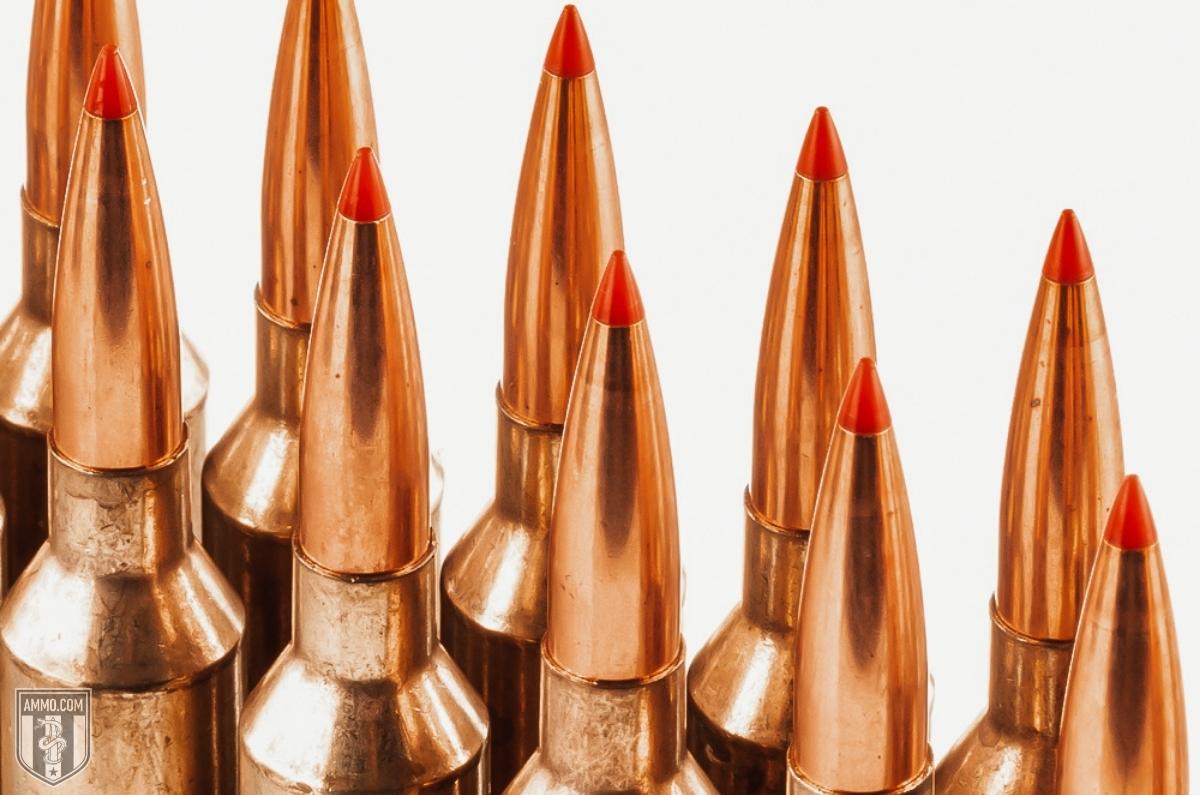 When comparing the 6.8 Western vs 6.5 PRC, it comes down to nitpicking the details to determine a winner.

The 6.5 PRC won most of the categories, but only by a narrow margin.

The most significant difference between these calibers is recoil.

If you prefer a lighter recoil, then the 6.5 PRC is the cartridge you should use.

However, if you hunt big game like moose, you should go with the 6.8 Western.