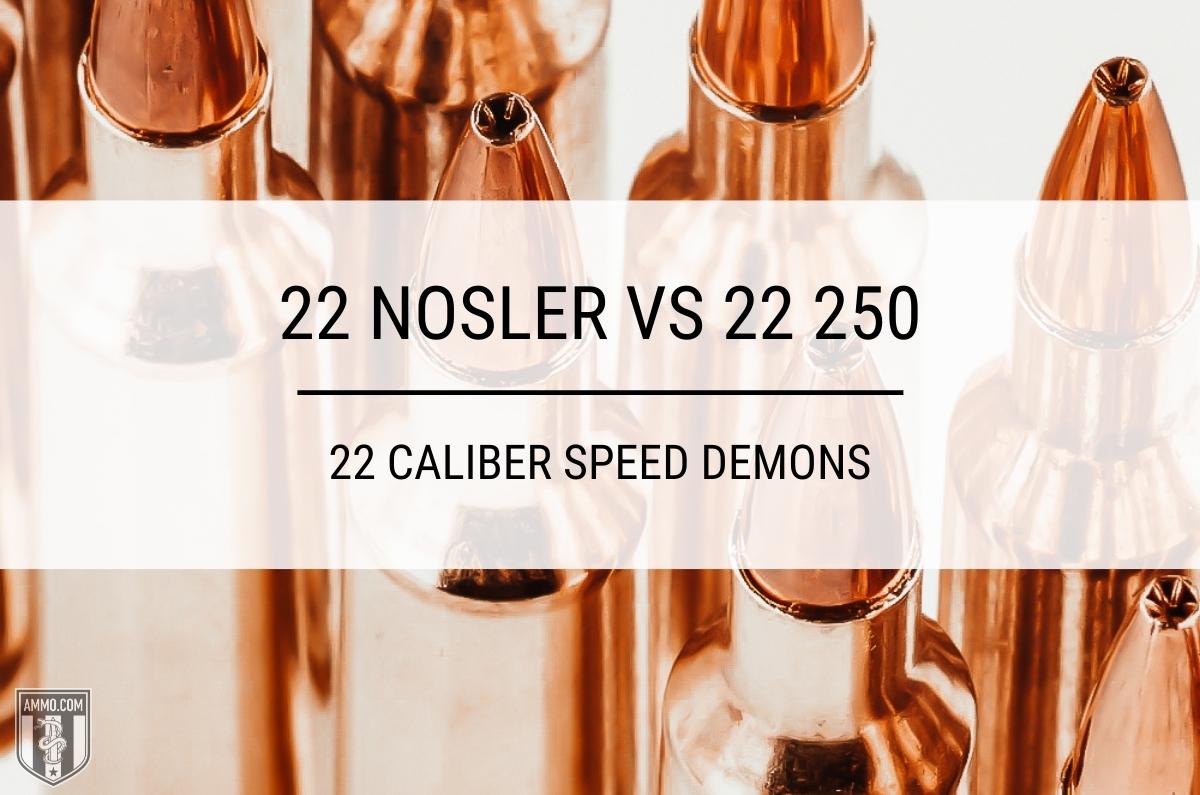 The 22 Nosler and 22-250 Remington are two 22 caliber centerfire cartridges that excel at varmint hunting.

Many shooters would agree that the 22-250 is the uncontested king of the vermin slayers not named 223 Remington. With its flat trajectory and blistering high muzzle velocities, the 22 250 has been the gold standard for varmint cartridges since its introduction in the 1930’s.

Although the 22-250 is a great cartridge, it is not well suited for semi-automatic fire. Although some shooters might contest that you do not need semi-auto for varmint hunting, follow-up shots and multiple target engagements can occur if you pull in multiple coyotes on your call.

Enter the 22 Nosler, a new cartridge with one goal in mind: the push the limits of the 22-caliber bullet in the AR-15 with minimal modifications to the rifle.

In this article, we will evaluate the 22 Nosler vs 22-250 Remington to help you understand the differences between the two and give you a clearer idea of which cartridge is best for your shooting needs.

The difference between 22 Nosler and 22 250 is that the 22 250 has a higher case capacity and will outperform the 22 Nosler in terms of ballistics. However, the 22 Nosler is designed to be fired from the semi-automatic AR-15 rifle while the 22-250 Remington is typically fired from bolt-action rifles.

One major difference between these two cartridges is how they were developed. 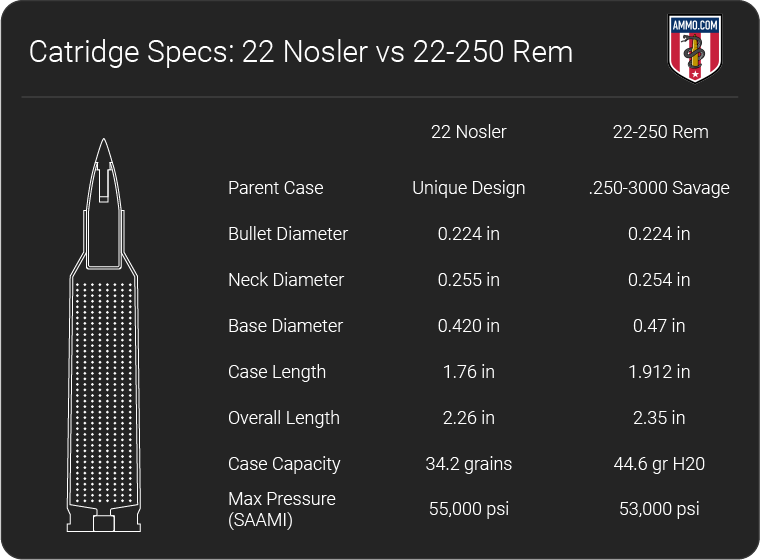 Like many cartridges of the early 20th Century, the 22-250 began its life as a wildcat cartridge known as the 22 Varminter. Gunsmiths of the 1930’s created the cartridge by necking down the .250-3000 Savage to accept 22 caliber bullets.

The 22 Nosler, on the other hand, is a relatively new cartridge as it was introduced at SHOT Show 2017. Unlike the 22-250, the 22 Nosler has no parent cartridge and was designed from the ground up to push the limits of 22 caliber bullets in the AR-15.

One difference that might not be detectable to most shooters is that the Nosler has its shoulders set back further than the 223 Rem. This is a safety measure to prevent a 223 Remington/5.56 NATO round from being chambered in a 22 Nosler barrel.

Both rifle cartridges fire the same diameter bullets at 0.224”. As such, their neck diameter is also identical.

With a larger case comes more case capacity, and the 22-250 can hold a whopping 44.6 gr compared to 34.2 gr for the 22 Nosler. This increased case capacity will generally allow the 22-250 to achieve higher velocities. 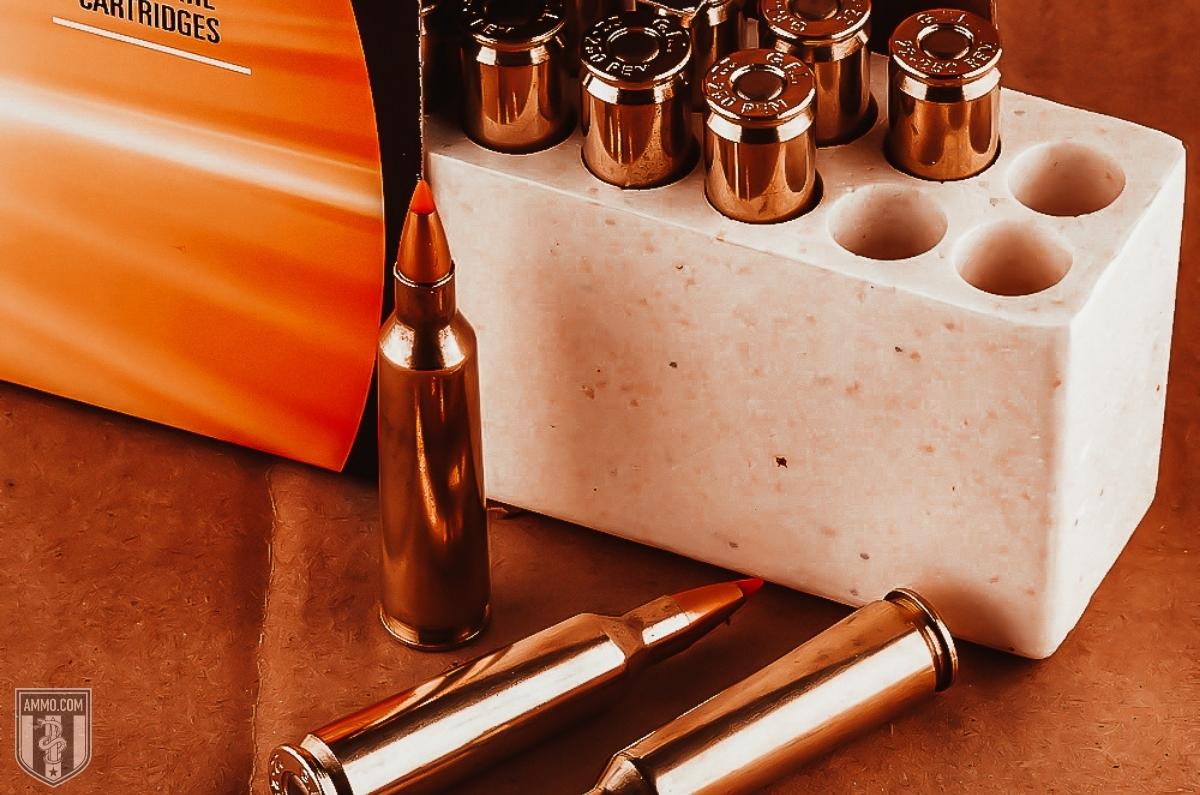 The final difference between these two centerfire cartridges is the maximum overall chamber pressures. The 22 Nosler can withstand slightly higher pressure loads at 55,000 psi per SAAMI specs compared to 53,000 psi for the 22-250.

The 22 Nosler will generally have less recoil than the 22-250, however most shooters consider both cartridges as having mild recoil.

Recoil is an important consideration when purchasing a new rifle as a round with heavy recoil will be more difficult to control and will slow your rate of follow up shots. 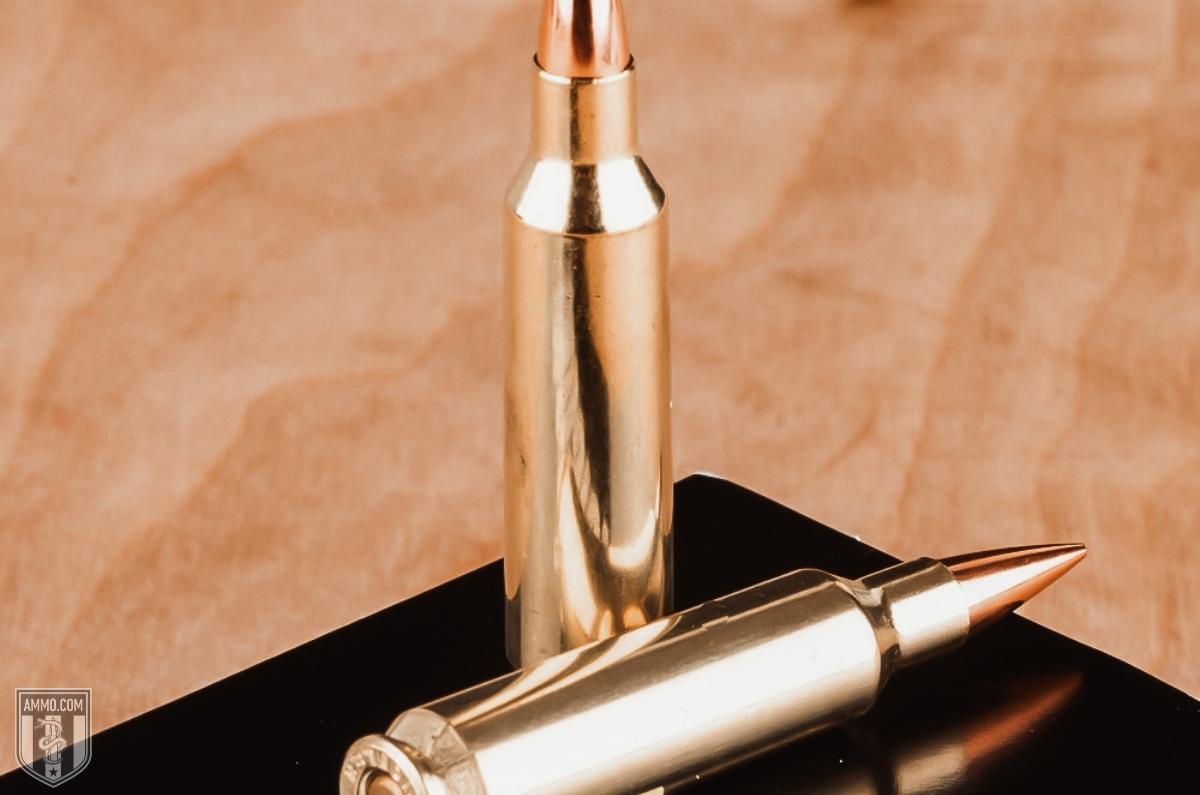 One of the downsides to the 22-250 is rifles typically come with slower twist rates. Typically, 22-250 rifles are delivered from the factory with a 1:12 or even 1:14 twist barrel. These slower twist barrels are great for stabilizing lower weight 22 caliber bullets, but these bullets are more susceptible to wind drift which is important when shooting long-range.

The 22 Nosler, on the other hand, generally comes with a 1:8 twist barrel. This faster twist rate is typical for the AR-15 platform and has been shown to easily stabilize bullets 55 grains in weight and higher. These heavier bullets will generally resist wind drift more effectively than lighter ones and gives hunters more versatility in the type of bullets they can fire.

The other issue to consider is barrel life, as both rounds are known for being tough on barrels. The Nosler website suggests that barrels should be changed around 2000-4000 rounds, which is typical for high velocity rounds like the 220 Swift.

Shooting forums and competitive shooters also report similar results for the 22-250, that peak accuracy begins to fall off around 2,000 rounds.

For this comparison we will analyze three factory loads for the 22-250, the Nosler Varmint 40 grain Ballistic Tip, the Sierra Prairie Enemy 50 gr BlitzKing, and the Hornady 55 gr V-MAX. For the 22 Nosler we will compare the Nosler Ballistic Tip 55-grain bullet and the Nosler RDF 85 gr HPBT Match. 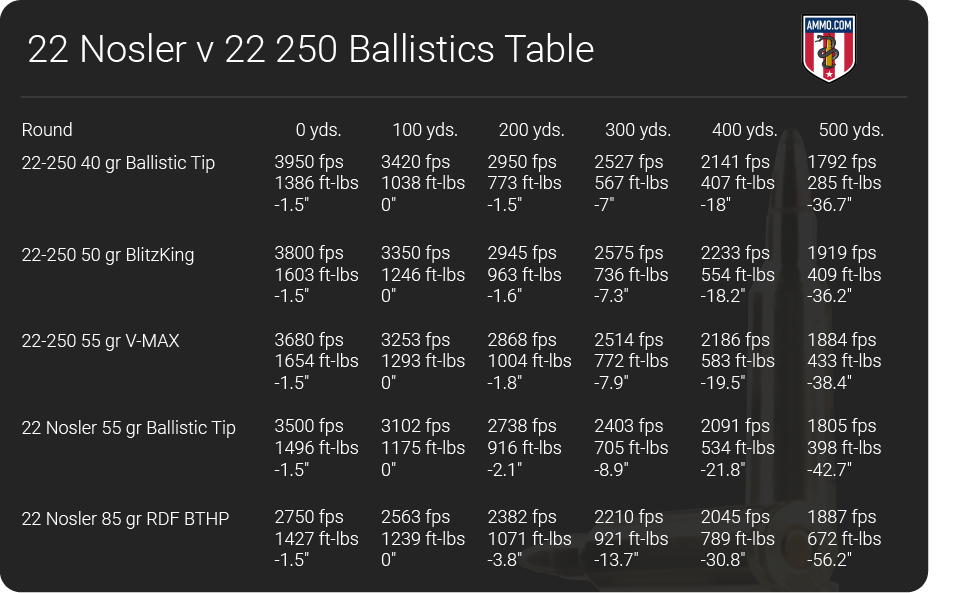 It’s no surprise that the 22-250 dominates in terms of muzzle velocity for all loads. The fastest factory load being the 40 gr Nosler Ballistic Tip at 3,950 fps with the Sierra 50 gr and Hornady 55 gr bullets coming in at 3,800 fps and 3,680 fps, respectively. 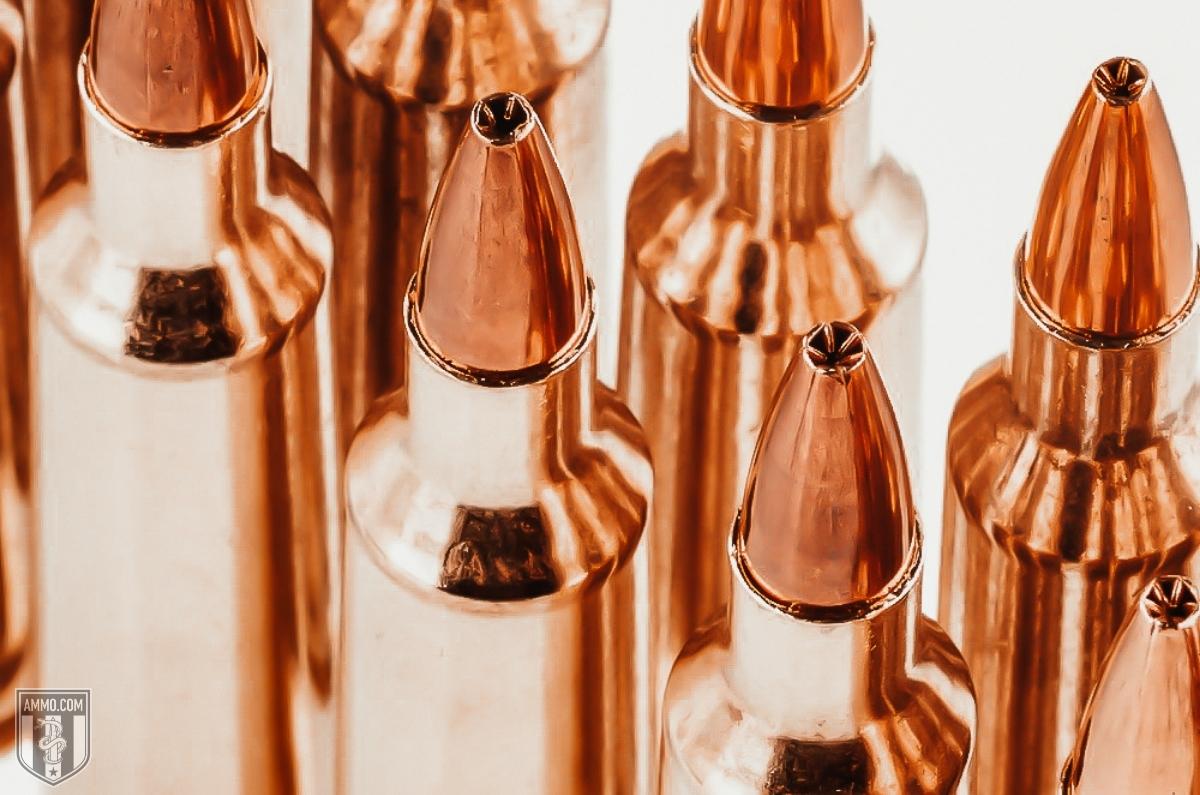 There’s no denying that the 22 250 ballistics are superior to 22 Nosler ballistics, however this was not entirely unexpected as the 22-250 has a 30% advantage in powder capacity over the 22 Nosler. That being said, the 22-250 is only slightly favored over the 22 Nosler when comparing similar bullet weights as evidenced by the two 55-grain loads for each.

The 22 Nosler will generally have a higher ballistic coefficient and sectional density for heavier 22 caliber bullets.

Ballistic coefficient (BC) is a measure of how aerodynamic a bullet is and how well it will resist wind drift. Sectional density (SD) is a way to evaluate the penetration ability of a bullet based on its external dimensions, design, and weight.

As both cartridges fire the same 22 caliber bullets, there is little to no difference in ballistic coefficient for bullets of similar weight and design. However, as the 22 Nosler is capable of firing heavier bullets, these offerings will have a higher BC. 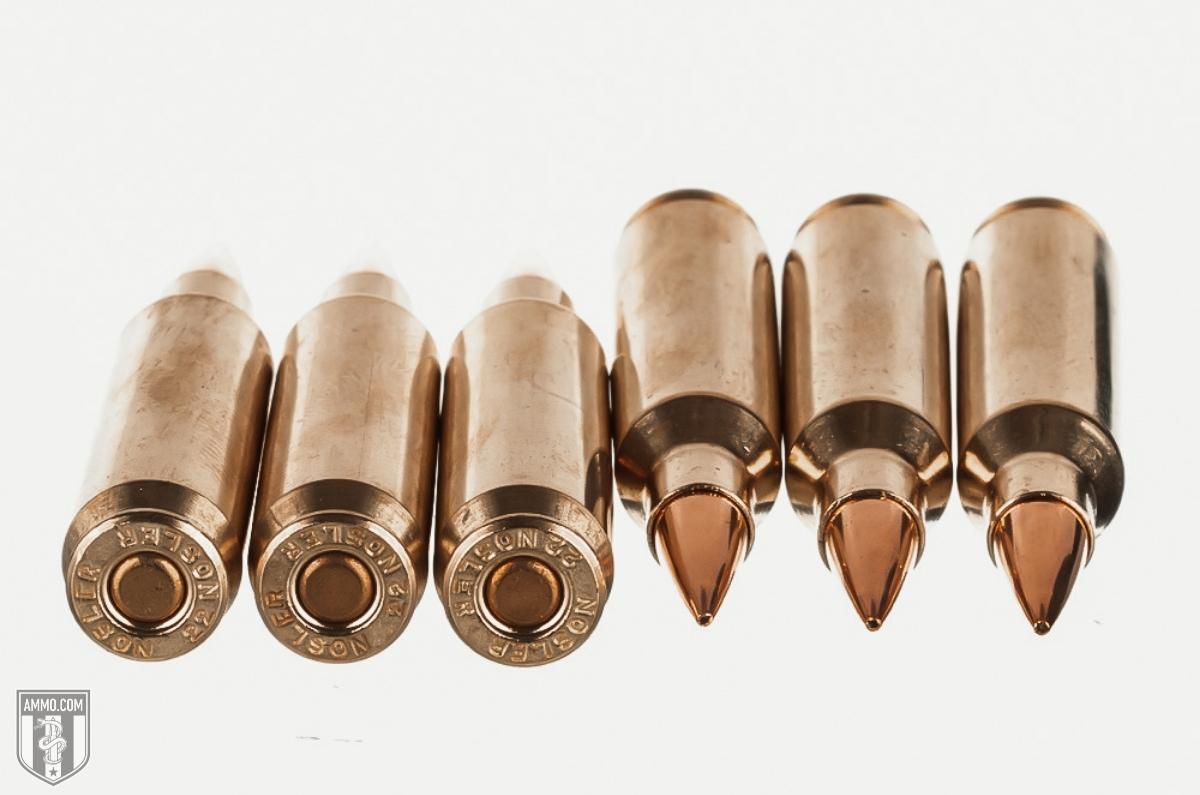 The 22-250 Remington and 22 Nosler are both excellent options for varmints and pest control.

The 22-250 has made a name for itself taking down thin-skinned varmints like woodchucks, prairie dogs, coyotes, and marmots for over 80 years. However, varmint hunters are warming up to the 22 Nosler as it offers similar ballistics to the 22-250 in the AR-15 platform.

Picking one cartridge over the other is difficult, however the 22-250 makes a better long-range hunting cartridge for smaller game thanks to its incredibly flat trajectory. Furthermore, 22-250 bolt-action rifles setup for prairie dog hunting have a 24 to 26-inch barrel to maximize muzzle velocity from the round.

The 22 Nosler is a great choice for predator hunting where you might call in multiple coyotes at the same time and you need fast follow-up shots. Typically, 20 to 24-inch barrels are used for the Nosler round.

Many shooters and internet forums have argued the concept of using a 22-caliber bullet for deer hunting. It’s a debate that we will unlikely solve in the context of this article, but those shooters who are for the 22 being used for deer would likely agree that the 22-250 makes for a poor deer hunting cartridge. 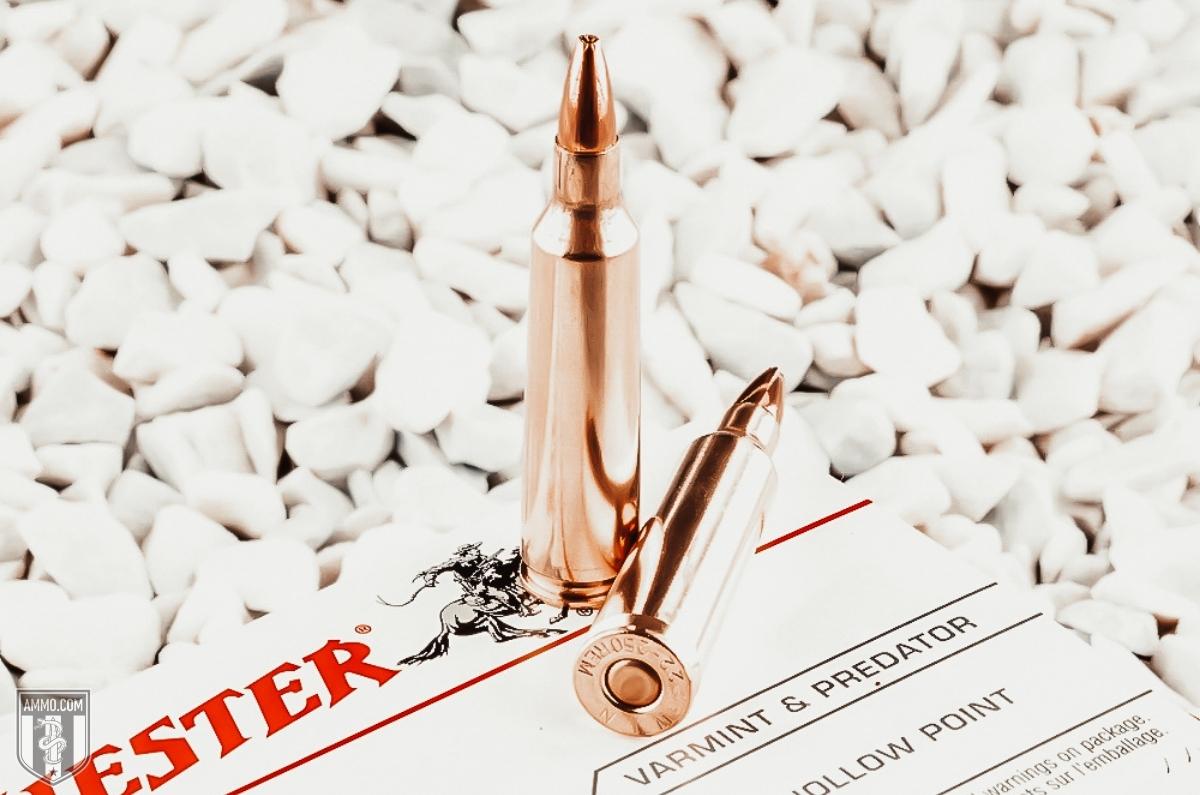 The issue with the 22-250 for deer is what makes it amazing for varmints: high velocity light bullets. Typically, when these light bullets impact a target, they are traveling so fast that they will break apart. This is great for small game like woodchucks where the fragments can do a lot of damage, but ill-suited for large game animals like deer as the fragments won’t penetrate deep enough for a clean kill.

If your state or territory allows for deer hunting with a 22-caliber cartridge, the 22 Nosler is the better choice as allows hunters to fire heavier bullets that provide the penetration needed to take a whitetail.

As the 22-250 has been around for over 80 years, there are considerably more ammo and rifle options available for it compared to the 22 Nosler.

In terms of ammo availability, the 22-250 cannot be beat as multiple manufacturers like Winchester, Sierra, Remington, and Hornady all have multiple factory loads for the round. Inexpensive plinking ammo for the 22-250 Rem typically runs around $1.50/round while the premium long-range varmint ammo costs closer to $2.25/round.

One downside to the 22 Nosler is that other ammo manufacturers have not picked up the round for production at this time. At the time of writing, Nosler was the only manufacturer making ammo for their cartridge. Ammo typically runs around $2/round on the low end and $3/round on the high end.

When it comes to rifles, the 22-250 is typically limited to bolt-action rifles while the 22 Nosler is exclusive to the AR-15. 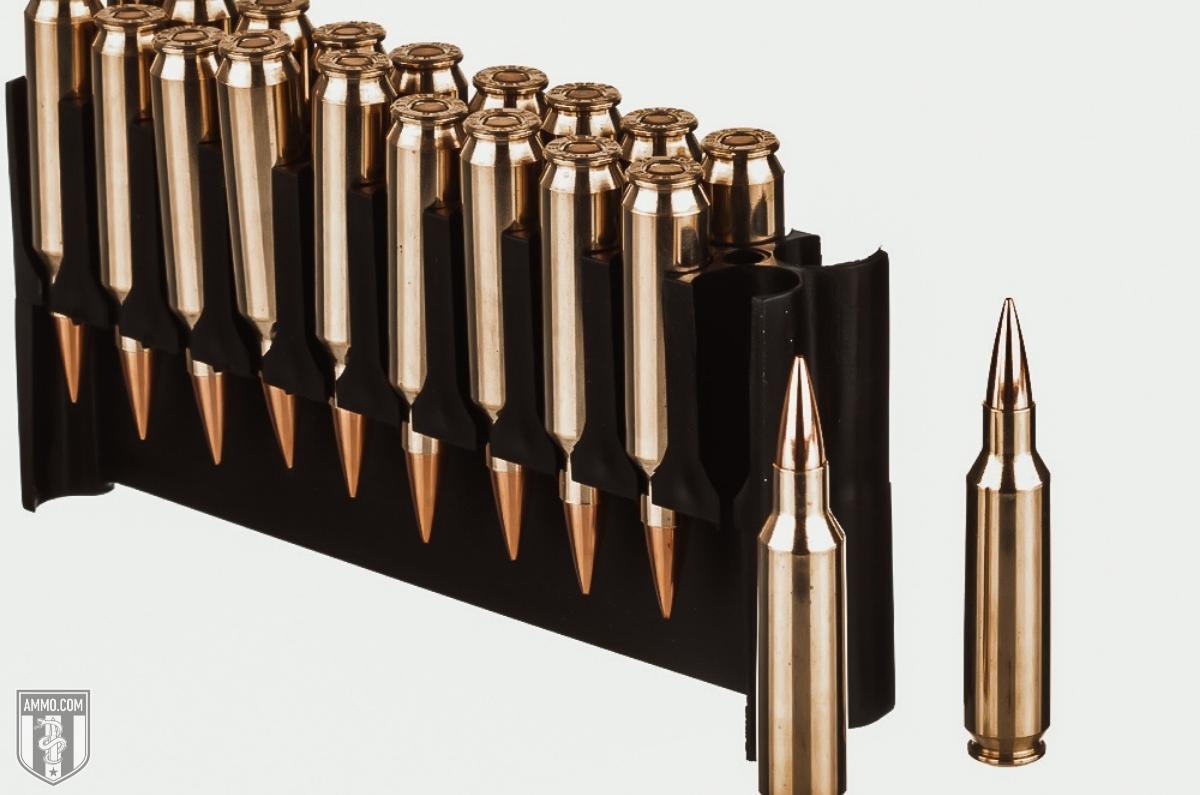 Most major rifle manufacturers have at least one offering for the 22-250, though most have more. There are budget-friendly rifles like the Mossberg Patriot, Savage Axis, and Ruger American that allow beginner hunts a solid platform to start their varmint hunting adventures with. However, if you are looking for a higher end rifle, options like the Remington 700, Winchester Model 70, Browning X-Bolt, and Savage 12 Varminter are capable of all your long-range varmint hunting needs.

For the 22 Nosler, any AR-15 on the market can easily be converted to fire the cartridge with a simple magazine change and barrel swap. As the 22 Nosler was designed with the AR-15 platform in mind, the original 5.56 NATO bolt will work and does not need to be changed. Magazines for the 22 Nosler are easy to find as the round will fit into standard 6.5 Grendel or 6.8 SPC magazines.

If you like to handload your own ammo, both cartridges offer you a lot of options for customization in terms of projectiles and powders to make the perfect reloads for your hunting rifle.

Hunters have been handloading the 22-250 for years, and there is a plethora of load data available for the cartridge with multiple powders to suit your needs.

Although the 22 Nosler is a newcomer to the shooting community, load data is available direct from the Nosler website in popular powders like Varget, H335, BL-C(2), and Benchmark along with many others. 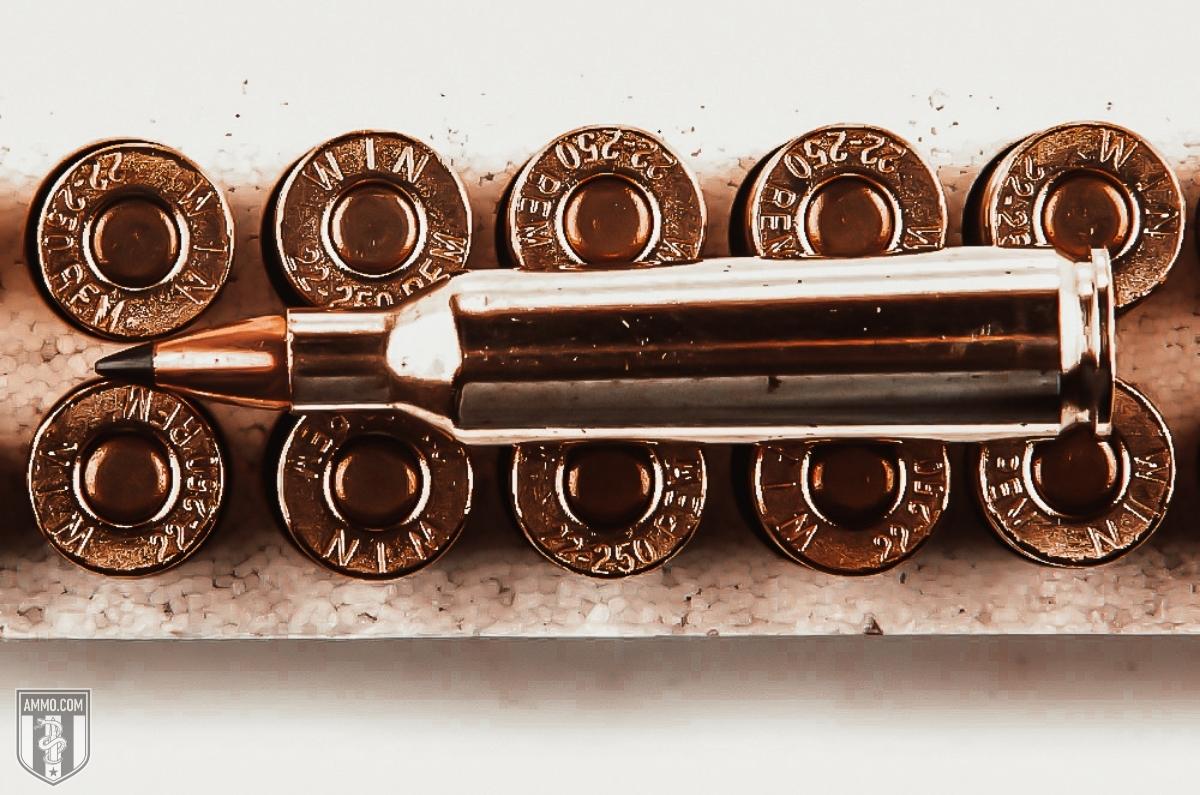 Bullets for both cartridges are extremely popular as the 0.224” bullet diameter is one of the most popular calibers in North America. Cartridges like the 223 Remington, 220 Swift, and 224 Valkyrie are also loaded with the same bullets, so finding surplus or inexpensive options is easy to do.

Although 22-250 factory ammo is relatively easy to find, 22 Nosler is rarer and reloading is one method that shooters use to ensure a consistent ammo supply.

The 22-250 and 22 Nosler are two rifle cartridges that represent two differing schools of thought for varmint hunting.

The 22-250 Remington has been around for nearly a century and is a classic bolt-action rifle caliber. It has been used to for years in curtailing prairie dog populations as well as being an excellent long range target shooting option.

The 22 Nosler is a newcomer to the varmint hunting family of cartridges, but it is unique as it was built specifically for the AR-15. Although 22 Nosler ballistics might not be as good as 22-250, the Nosler offers shooters semi-auto capability for multiple target engagements and fast follow-up shots.

Deciding between the 22-250 and 22 Nosler comes down to your preferred firearm. If you want to maximize the potential of a bolt-action then go with the 22-250, but if you want high-end performance out of an AR-15 then the 22 Nosler is the obvious choice.