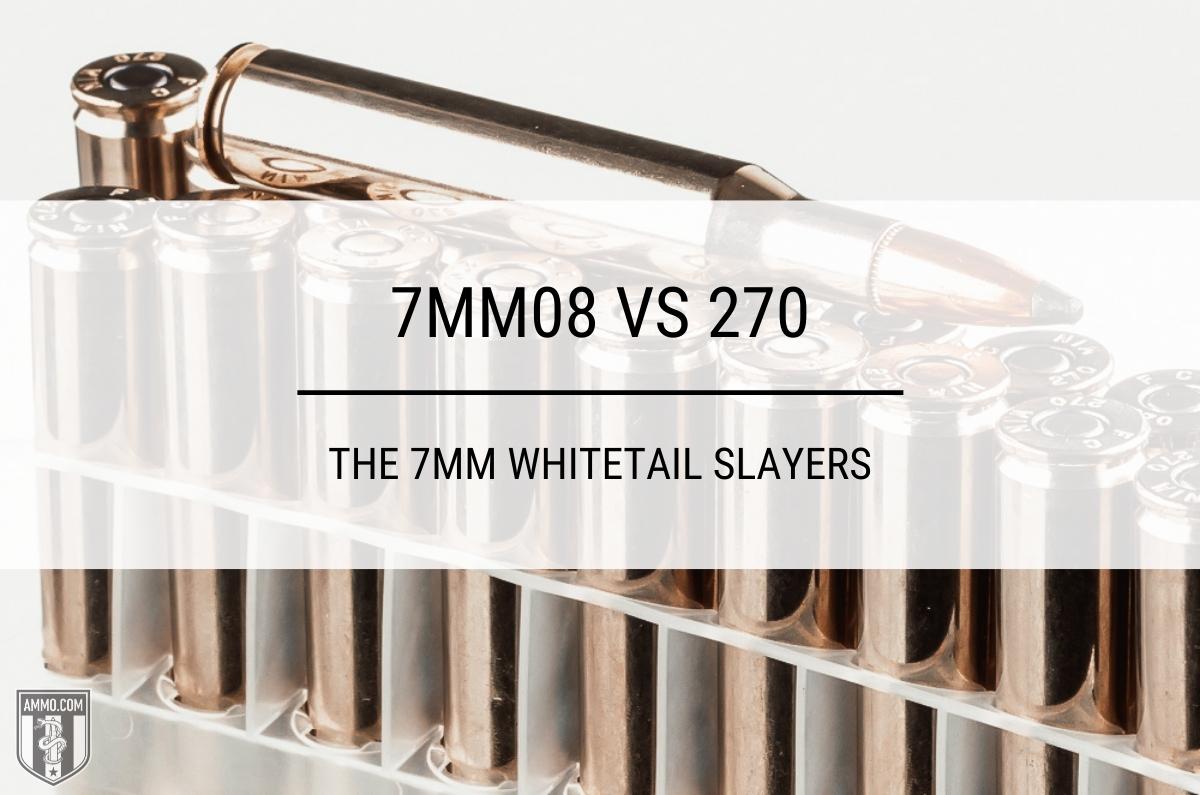 For over a century, the North American hunting scene has been dominated by 30 caliber cartridges like the 30-06 Springfield, 300 Win Mag, 308 Winchester, and 300 WSM. Although the effectiveness of .308” diameter bullets has been well documented, many hunters are transitioning to smaller diameter bullets with less recoil and higher muzzle velocities.

This transition has become more mainstream with the success of the 6.5 Creedmoor, however two extremely potent big game hunting rounds that pre-date the 6.5mm craze are the 270 Winchester and 7mm-08 Remington.

The 7mm-08 Remington and 270 Winchester are two rifle cartridges that have more similarities than differences.

Although the 270 Win has a slightly larger case with an increased case capacity and marginally improved downrange performance, the 7mm-08 offers shooters comparable ballistic performance with less recoil in a short action rifle.

In this article, we will evaluate the 270 vs 7mm-08 Rem to help you understand the differences between the two and give you a clearer idea of which cartridge is best for your shooting needs.

The main difference between 7mm08 and 270 Win is that the 270 has higher case capacity than 7mm08. This in turn, means that 270 factory loads will have slightly higher muzzle velocities than the 7mm-08 for comparable bullet weights. 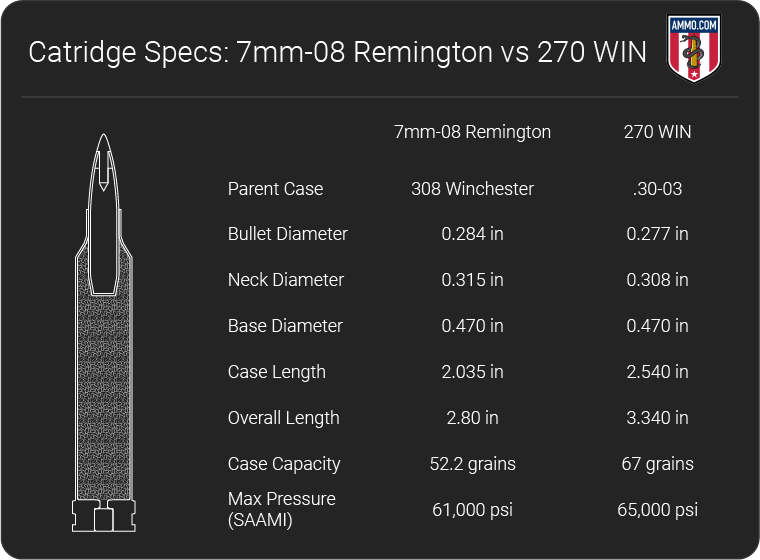 Saying the 7mm-08 fires a 7mm bullet is a bit of a misnomer, as the 270 fires a true 7mm bullet diameter while the ’08 fires a 7.2mm bullet. While most shooters won’t make much of a fuss over the difference between 7mm vs 7.2mm diameter bullets (and I doubt a mule deer can tell the difference), handloaders need to be aware of the difference when reloading for each cartridge.

Primarily built as hunting rounds, the 270 Win and 7mm-08 are predominantly fired from bolt-action rifles, however the difference in overall length directly corresponds to which action each cartridge fits into. The 270, like its parent the 30-06, fits into a standard or long action while the 7mm-08 Rem holds true to its 308 roots and fits into short action.

A short action will require slightly less bolt throw to cycle a round and is typically a little lighter than a standard or long action. This means that follow up shots can be slightly faster in a short action compared to a long action. 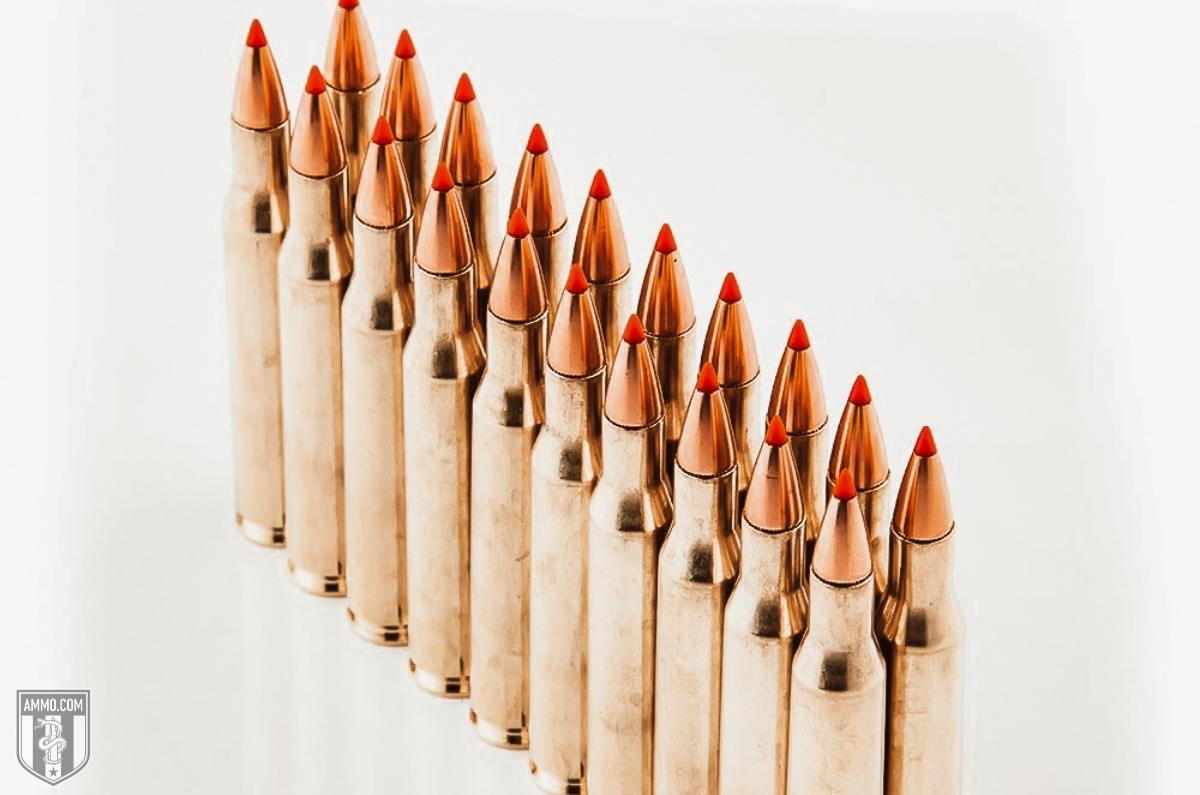 The longer case of the 270 allows it to house more gunpowder than the 7mm-08, with the 270 maintaining a 67gr case capacity compared to 52.2 gr for the 7mm08. This capacity difference also correlates with the SAAMI maximum chamber pressures for each hunting cartridge, with the 270 Win being capable of handling 4,000 psi more at 65,000 psi compared to 61,000 psi for the 7mm-08.

Although both hunting cartridges are close in terms of recoil, the 7mm-08 Remington has slightly less recoil than the 270 Win.

Recoil is an important consideration when purchasing a new rifle as a round with heavy recoil will be more difficult to control and will slow your rate of follow up shots.

Even though both rifle cartridges generally fire similar bullet weights, the lower powder charge for the 7mm-08 lends itself to lower recoil.

For this example, we will compare two 150-grain bullets that are popular for both chamberings. For the 270 Winchester we will analyze the 150 gr Nosler Accubond and compare it to the Hornady 150 gr ELD-X for the 7mm-08 Rem.

It is true that the 270 Win has slightly more free recoil than the 7mm-08, but most shooters will not be able to tell much of a difference between the two rounds. 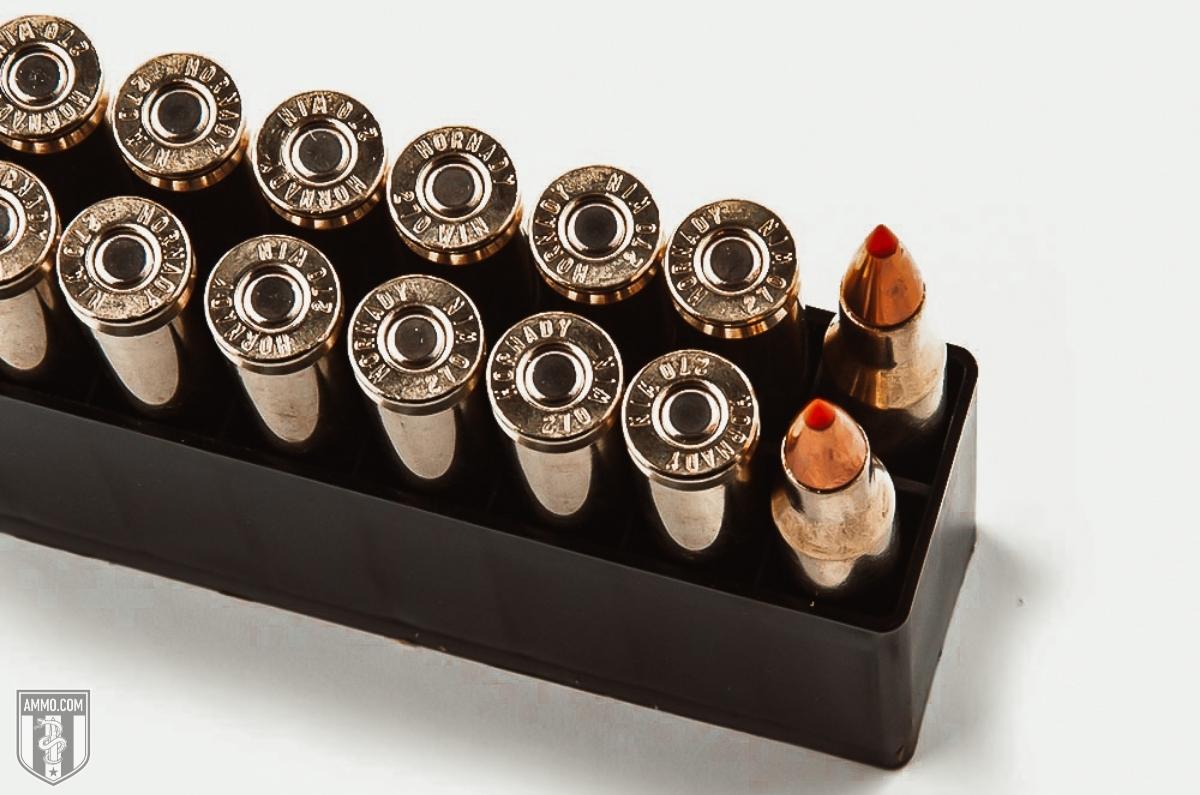 With its higher case capacity, the 270 Winchester typically has a slight edge over the 7mm-08 in terms of muzzle velocity, kinetic energy, and have a flatter trajectory when comparing bullets of similar weight.

For the purpose of this comparison, we selected 4 different factory loads to analyze. For the 270 Winchester, the 130 gr Hornady SST and 150 gr Nosler Accubond and for the 7mm-08 Rem the 120 gr Barnes TTSX and Hornady 150 gr ELD-X.

In terms of trajectory, both hunting cartridges are very flat shooting and comparable out to 300 yards with a 4” difference in bullet drop between all four loads. However, at longer ranges the 270 Win has a flatter trajectory and can maintain its velocity and energy more efficiently.

Although it seems like the 270 is simply better than the 7mm-08, it is important to note that both rounds have similar ballistic performance within normal hunting ranges under 500 yards.

For example, at 400 yards the 270 Win 150 gr Accubond only has around 100 fps more velocity, 150 ft-lbs more kinetic energy, and about 2” less bullet drop compared to the 150 gr ELD-X for the 7mm08. That’s rather impressive considering the 7mm-08 fits into a short action and has slightly less recoil than the 270. 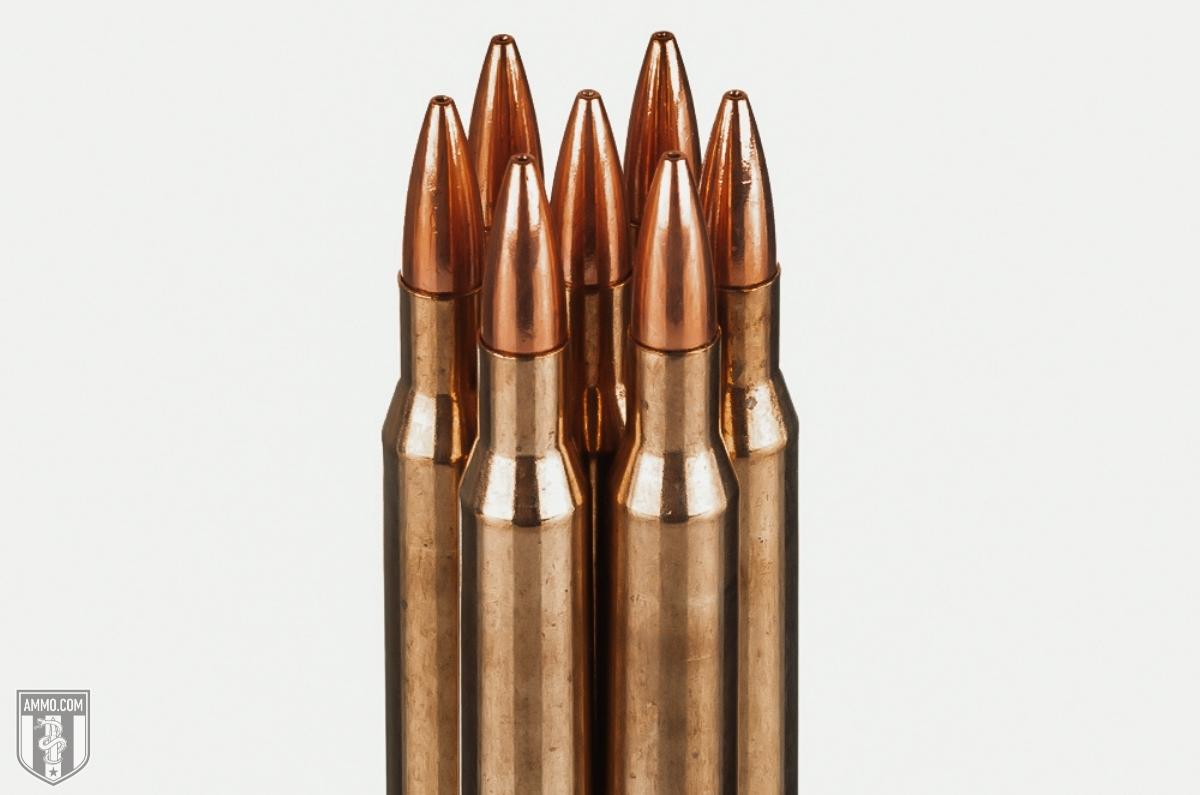 There’s no denying that the 270 Win has superior long range ballistics, however at typical hunting ranges under 500 yards, the 7mm-08 and the 270 are roughly comparable.

The 270 Winchester will typically have a slightly higher ballistic coefficient and sectional density compared to the 7mm-08.

Ballistic coefficient (BC) is a measure of how aerodynamic a bullet is and how well it will resist wind deflection. Sectional density (SD) is a way to evaluate the penetration ability of a bullet based on its external dimensions, design, and weight.

Although the 270 will generally have a higher BC, often the differences between it and the 7mm08 are incredibly minor. 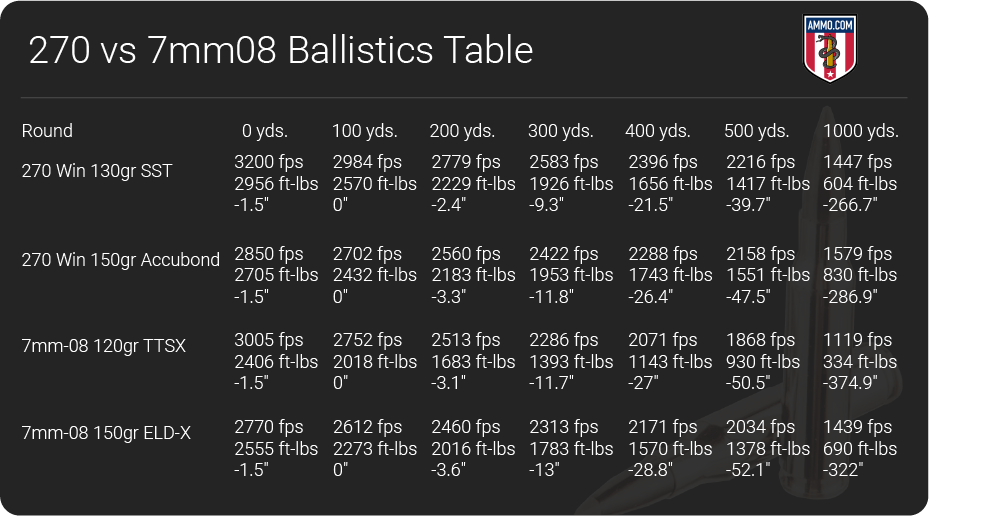 For sectional density, the 270 Win has a slight edge over the 7mm08. This is due to the 270 firing a slightly slenderer bullet at higher velocities, meaning that all the force of the bullet can be localized on a smaller area and therefore penetrate deeper into the target.

In general, the 270 will have a higher BC and SD than the 7mm-08, however the differences between the two are razor thin when comparing bullets of similar design. 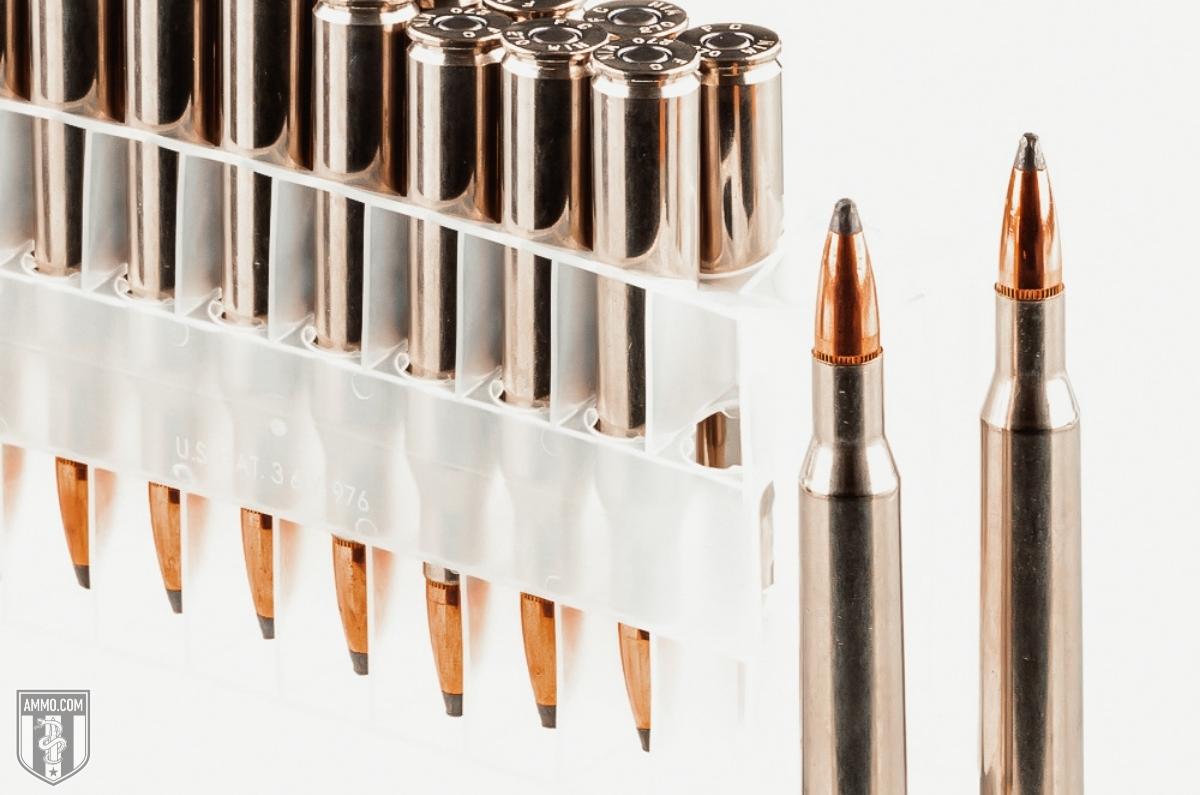 Both the 270 Winchester and 7mm-08 Remington make an excellent choice for your next hunting rifle.

The late Jack O’Connor of Outdoor Life magazine spent a good part of his career expounding on the versatility of the 270 as a hunting cartridge. Sadly, he passed away before the release of the 7mm-08, as it would have been interesting to hear his take on the 7mm since it can do almost everything that his belove 270 can do while chambered in a short action rifle.

One of the major advantages of both cartridges is having factory ammo available in a wide range of bullet weights. Factory loads for 270 and 7mm-08 are loaded with projectiles as low as 96 grains and as high as 160 grains, giving hunters the option to take on mid-sized varmints like coyotes all the way up to big game like elk and black bear.

However, what both cartridges are most well-known for is their effectiveness against whitetail and mule deer. Both rounds carry enough kinetic energy to ethically harvest deer at ranges over 500 yards and have less free recoil than traditional big game hunting cartridges like the 300 Win Mag or 308 Winchester.

In terms of African game, both rounds would be effective for Springbok, Impala, and Kudu. For larger and dangerous game like Cape Buffalo or elephant, the 270 and 7mm-08 lack the kinetic energy needed to harvest these animals and you’d want something bigger like a 416 Ruger or 460 Weatherby Magnum.

As the 270 Winchester is an older caliber, there will generally be more availability in terms of ammo and firearms than the 7mm-08. 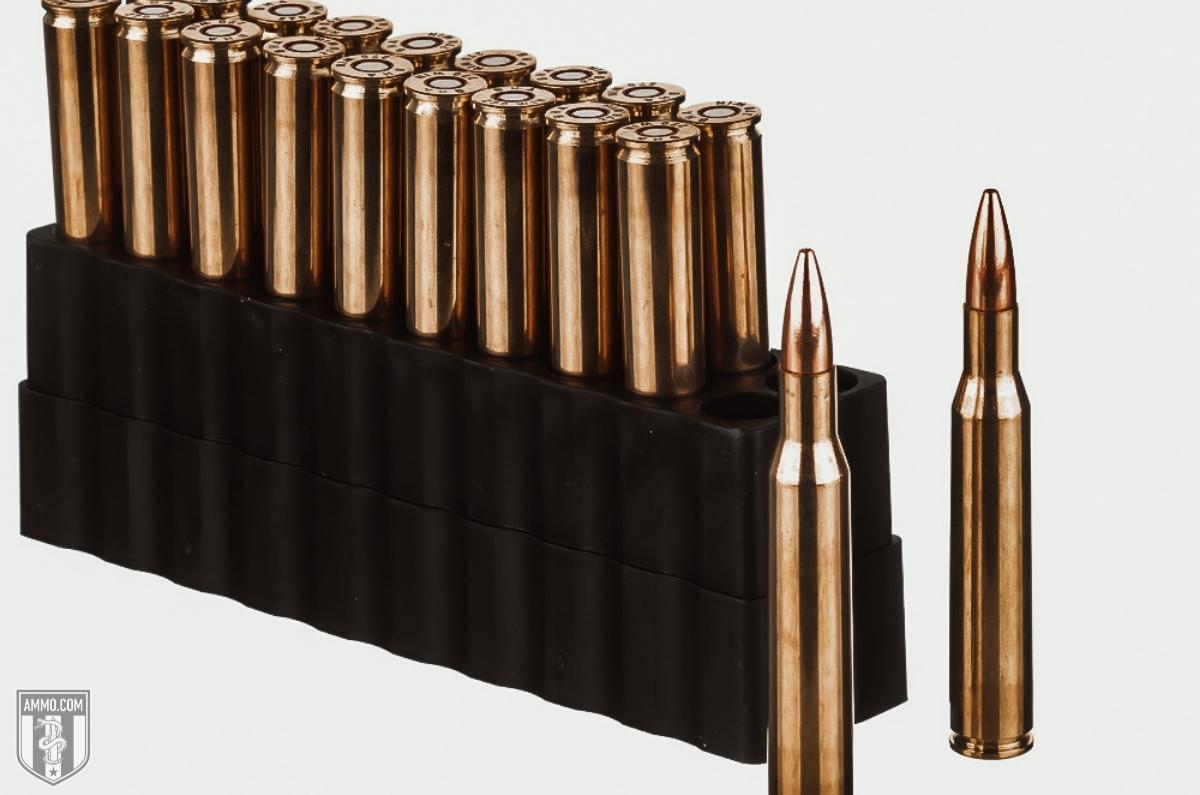 In terms of ammo availability, the 270 Win typically enjoys a 2:1 margin in terms of factory ammo varieties. The popularity of the 270 is mostly due to Jack O’Connor pumping it for years in Outdoor Life magazine as well as being on the market for almost 60 years longer than the 7mm-08.

In terms of price, there is not a lot of difference between the 270 and 7mm-08 Remington.

Although the 270 is slightly less expensive, most hunters will not shoot through thousands of rounds per year. Instead, they will typically use a few boxes to zero their hunting rifle before the season opens and then maybe go through a box or two in the field. Therefore, ammo cost is less of an issue when selecting either cartridge for your next hunting rifle.

Both the 270 and 7mm-08 are considered hunting cartridges almost exclusively, therefore most firearms available for both calibers will be bolt-action rifles.

Even though the 7mm-08 is a relatively newcomer to the hunting scene, rifle manufactures have seen the utility of the cartridge and have several offerings for every budget. For entry level rifles, the Ruger American and Savage Axis are both chambered in each cartridge, while the Winchester Model 70, Remington 700, and Weatherby Vanguard are popular options for higher end bolt-action rifles. 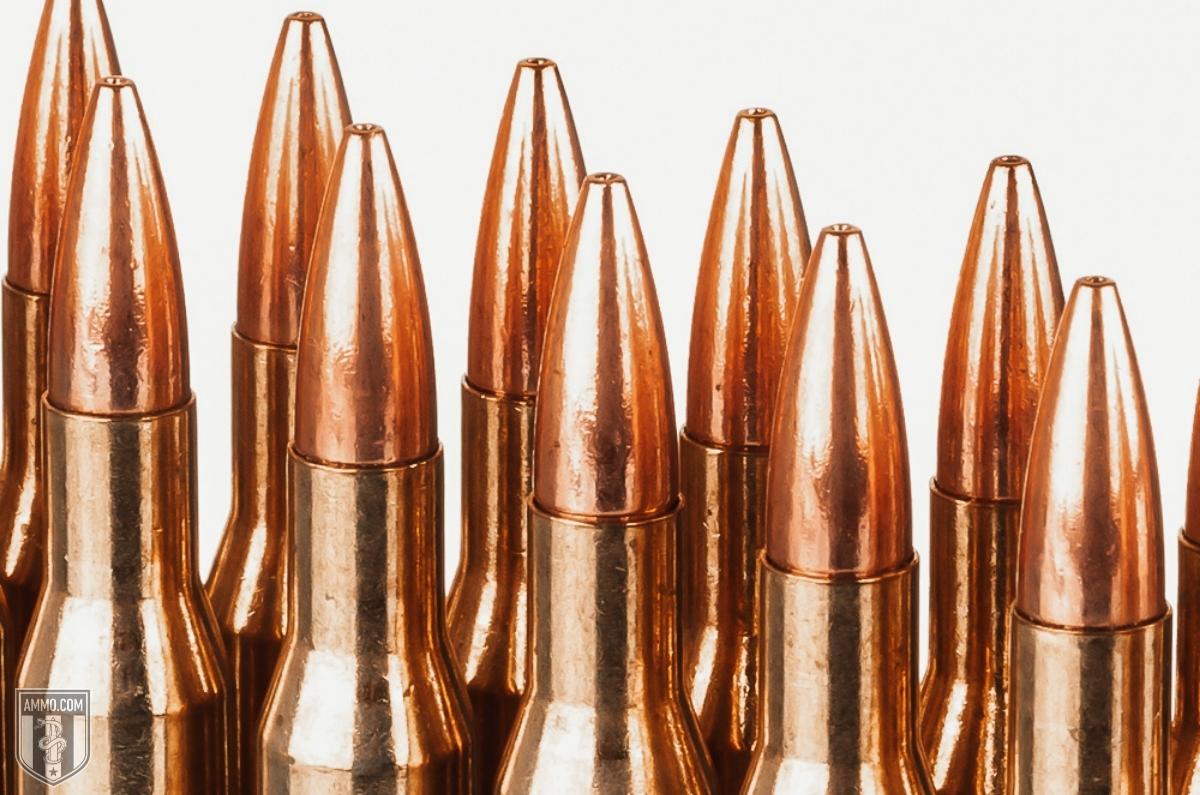 The primary semi-auto option is the Browning BAR, as it is available in both 270 Win and 7mm-08 Remington.

If you like to handload your own ammo, both cartridges offer you a lot of options for customization in terms of projectiles and powders to make the perfect sub-MOA reloads for your hunting rifle.

Projectiles for the 270 will typically be easier to come by as the caliber has seen a lot of hype surrounding the adoption of the 277 Sig Fury round by the US military. Furthermore, 0.277” diameter bullets are also used in the 6.8 SPC, 270 Weatherby Magnum, 270 WSM, and 27 Nosler.

For the 7mm-08, there is still a lot of bullet availability as the 7mm Rem Mag, 7x57 Mauser, and 280 Remington are also popular cartridges that fire a 0.284” diameter bullet.

It’s important for reloaders to remember the differences between bullets and how manufacturers name them before placing an order. Often bullets for the 270 Win will be labeled as 0.277” or 270 while bullets for the 7mm-08 can be referred to as 7mm or 0.284”. The “7mm” designation for 0.284 can be confusing to some new handloaders as they are technically 7.2mm in diameter. Always ensure that you purchase the correct projectiles for your caliber of choice.

As far as powders are concerned, there is a wide variety of options from manufactures like IMR, Hodgdon, and Accurate, and Ramshot for both 270 Win and 7mm-08 handloads. 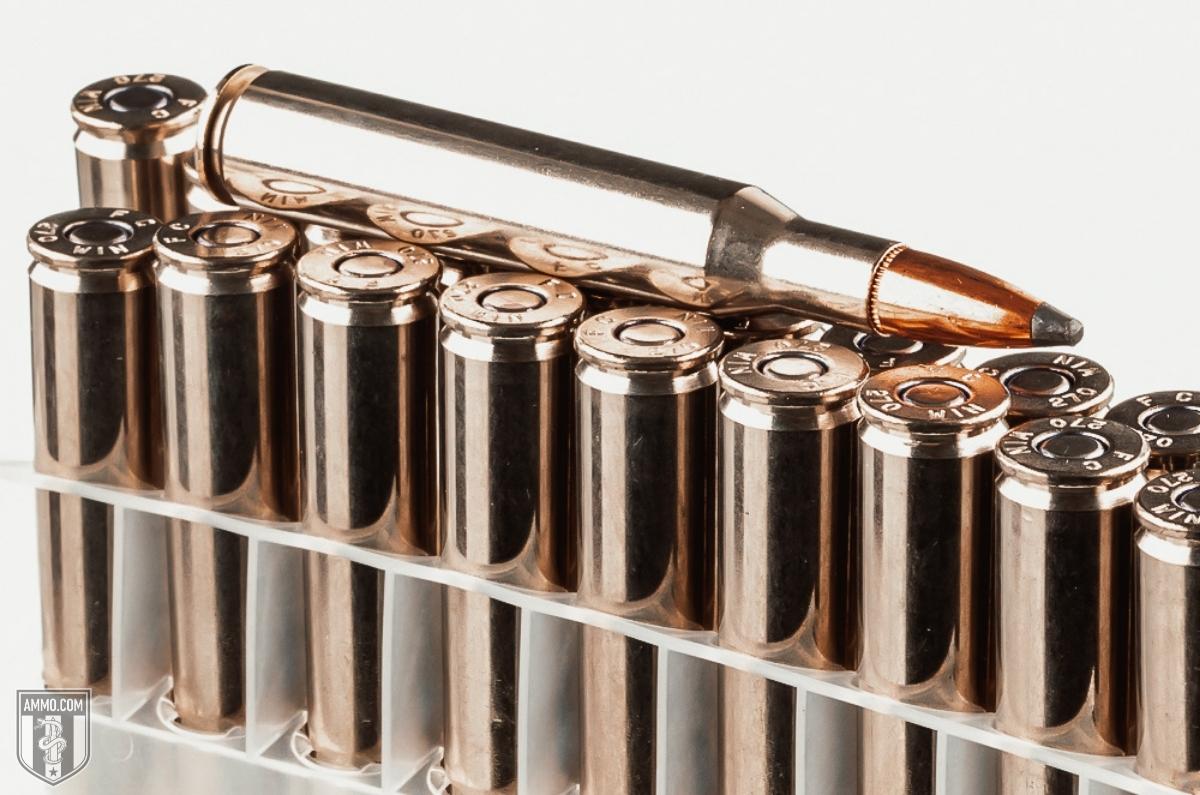 The 270 Winchester and 7mm-08 Remington are two superb hunting cartridges that are more like each other than they are different.

The 270 Winchester is the larger cartridge of the two and has superior ballistic performance thanks to its higher case capacity. However, the 270 Win also requires a long action and has slightly more recoil than the 7mm-08.

The 7mm-08 Remington is a newer addition to hunters’ arsenals, but it offers some qualities that the 270 cannot. As the 7mm-08 was based off the 308 Winchester, the 7mm-08 can fit into a short action and has slightly less recoil than the 270 with comparable ballistic performance at traditional hunting ranges.

Although the 7mm-08 offers several advantages, ammo availability is a consideration as there is nearly 2x more ammo options for 270 than 7mm-08 Rem. Many hunters will prefer the tried-and-true 270 Winchester as it is easier to find rifles, ammo, and projectiles for reloading.

However, if you’re in the market for a new hunting rifle and you want something a little more compact, then the 7mm-08 Remington might be a good choice to fill your shooting needs.