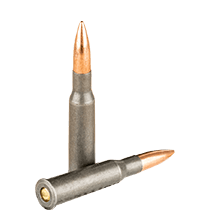 Live Inventory
Having served in the Russian military for over 120 years, the 7.62x54R holds the record for longest service life of any military rifle cartridge. Because of its accuracy, reliability and power – 7.62x54R ammo is a great choice for hunting or target shooting. Learn More
per page

In 1891, the 7.62x54mmR entered service for the Tsar’s Russian Imperial Army in the Mosin-Nagant rifle. The rifle remains popular with civilian shooters around the globe, and militaries still use the 7.62x54mmR as well. Its most notable use is in the Dragunov sniper rifle. The PKM machine gun, however, is also chambered for the 7.62x54mmR cartridge. This ammo has more than 120 years of continuous service, making it the world's longest-serving small arms military cartridge.

Some shooters reasonably believe that the R in the name of the 7.62x54mmR stands for Russian, but in truth, it stands for Rimmed. In fact, this is one of the only standard-issue cartridges in the world with a rim. This is the case for many other cartridges with the R designation, representing the protruding rim being a feature of the case.

Ballistics performance numbers for the 7.62x54mmR are comparable to the .308 Winchester. The original load used a round nose full metal jacket bullet weighing 210 grains, but was later replaced by a full metal jacketed spitzer point bullet weighing in at a much lighter 147 grains. This bullet weight has stayed the most common, but applications for this cartridge have spanned the gamut. For use by the line infantry, the bullet has a full metal jacket and steel core. Other bullet types for this cartridge include tracers, armor piercing rounds and ammunition specially designed for sniping applications.

As part of the World War I effort for Russia, Winchester manufactured 300,000 weapons for the Russian Imperial Army. This was a massive order constituting 70 percent of all weapons total by Winchester prior to 1936, when the weapon was discontinued. The weapon was a special lever action design that could be reloaded with the exact same changer clips as the Mosin–Nagant.

The weapons were initially delayed because the adaptations were more difficult than Winchester had anticipated. This was compounded when the rifles finally arrived in Russia. The inspectors were largely incompetent. They wouldn’t use Winchester’s gauges to test the rifles – and there were no Russian gauges to use instead. They further demanded to use only test ammunition shipped from Russia despite being surrounded by ammunition made by Winchester contractors. Rifles were frequently rejected for frivolous reasons, such as the wood grain on the stock not being straight enough. These rejected rifles soon found eager buyers on the American market and were popular for years to come.

Most of the rifles ended up in the hands of Balts and Finns, finding the widest use among the Latvian Riflemen. They saw extensive use during the Russian Civil War. The final resting place of many of the arms was in Spain – Stalin gave 9,000 of them to Spanish Communists during the Spanish Civil War.

It’s not just the rim that makes it an anomalous round. The 7.62x54r is part of a very small class of cartridges: Centerfire rounds with a rim and a bottleneck design produced for rifles. The other holdouts are .22 Hornet, .30-30 Winchester, and .303 British. This type of round was popular in the 19th century, but gradually fell out of use and became virtually extinct by the end of the First World War.

In 1966, the Soviet Union began looking for ways to make the Dragunov sniper rifle more accurate. This led to the development of the 7N1 cartridge, a variant of the 7.62x54r specifically designed for sniper rifles. The result was a new design that substituted match-grade extruded powder for ball propellant and leveraged an air pocket, a steel core and a lead knocker.

This round saw broad use in the world’s militaries until 1999. At that point, it largely had been rendered obsolete. This was due to increased resiliency and sophistication of military-grade body armor. It was then replaced by the 7N14, which was in turn a modification of the 7N1. This modification saw the introduction of a hardened steel penetrator so that it would more easily get through contemporary military hardware.

The primary rifle associated with the 7.62x54r is the Mosin-Nagant, developed by the Russian Empire over a period of nine years. It is now one of the most produced rifles on the planet. All told, 37 million rifles have rolled off the lines since its first release in 1891. It’s quite possible that the weapon – and thus the 7.62x54r round – have seen action in more conflicts around the world than any other.

The roots of the weapon lie in the Russo-Ottoman War of 1877-1878 (not to be confused with any of the seven other wars with the same exact name taking place between 1568 and the Crimean War in 1853). During this war, the Russians were outfitted primarily with Berdan single-shot rifles and found themselves being cut to pieces with Winchester repeating rifles. This inspired the heads of the Russian military to begin searching for a better standard-issue weapon for their infantry.

Leveraging semi-official channels, the Russian Army obtained the French Lebel M1886 and began tinkering with it. It came with a semi-complete cartridge lacking the smokeless powder and the prime. Russian engineers had to solve this problem and solve it they did.

The Mosin-Nagant was submitted for approval – and the committee could not decide between two designs, one submitted by Russian Major General Sergei Ivanovich Mosin and the other from Belgian firm Fabrique d'armes Émile et Léon Nagant. Elements of the two rifles were merged, hence the name.

It’s worth taking time to say a word about the two fathers of the rifle:

Around the world, target shooters and hunters use the 7.62x54mmR since the cartridges are readily available. And in comparison to the .308 Winchester, are much less expensive. The Mosin-Nagant rifle is popular at the entry level in the U.S., since many new shooters appreciate the affordable prices of the rifle and the ammo.

This ammunition also enjoys the advantage of being sold in the well-known “Spam cans,” steel cases that hold 880 rounds of ammunition and allow storage for indefinite periods of time. Two of the main manufacturers of 7.62x54mmR ammo are Tula and Wolf, but some others occasionally produce a run as well.

Hunters choose the 7.62x54mmR to take trophy game, and aspiring target shooters use the cartridge to win trophies at the range.

The Soviet 7.62x54r cartridge is most famously matched with its military firearms, including the Mosin-Nagant rifle, Dragunov sniper rifle, and PKM machine gun. As far as American rifles go, the Winchester Model 1895 was chambered in the 7.62x54r.

Is the 7.62x54r equivalent to any other ammo caliber?

Ballistically, the 7.62x54r is similar to both the .30-06 Springfield and the .308 Winchester. The 7.62x54r is even sometimes referred to as the Russian .30-06. It’s also one of the few rimmed (which is what the “r” stands for in the name) bottlenecked centerfire cartridges still used today, a classification it shares with .22 Hornet and the .30-30 Winchester.

The penetration of the 7.62x54r depends on the type of ammo, as well as the weapon it is fired from. Full metal jacket rounds tend to reach a high velocity and penetrate deeper than other rounds. Specialty rounds, such as steel penetrators, reach even deeper penetration.

When it comes to commercial ammunition, the 7.62x54r is leaded to a maximum pressure of 56,565 pounds per square inch (psi). When handloading, changes can be made to increase or decrease the pressure.

Although not as common as other commercial ammo rounds, the 7.62x54r is available by multiple ammunition companies, including Tula Ammo, Prvi Partizan, and Sellier and Bellot. It is also available as military surplus ammo.

The 7.62x54r tends to be an affordable round and many opt to simply purchase commercial ammo instead of reloading, although the cartridge can be hand loaded with a lighter load in some cases. If using military surplus, the shells shouldn’t be reloaded. These rounds typically use Berdan primers, which result in corrosion on the cartridge and is therefore not safe for handloading. Prvi does make a boxer primer that can be used instead.

Prvi Partizan 7.62x54r Ammo - 20 Rounds of 150 Grain SPBT Ammunition
based on the 1 review below
Add review

Sellier and Bellot 7.62x54r Ammo - 20 Rounds of 180 Grain FMJ Ammunition
based on the 1 review below
Add review