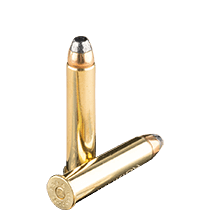 Live Inventory
Known for its use in Trapdoor rifles, the .45-70 is an excellent choice for hunting any North American game. It is popular among reenactors and long-range target shooters who enjoy the challenge of using black powder cartridges for their sport. Learn More

Known by several names – including .45-70 Government, .45 Government, and .45-70-45 – the .45-70 was developed by the U.S. government and is one of their greatest cartridges. Even today, the cartridge retains the respect of hunters and shooting enthusiasts, and is one of the very few cartridges that has continued to thrive after being converted from using black powder to smokeless powder. The .45-70 was developed at the historic Springfield Armory in Massachusetts as a short-term replacement for the .50-70, which had been adopted just over a decade before.

In 1873, the .45-70 was adopted for use in the 1873 Springfield trapdoor action rifle, after which it was improved in several important ways. Seven years after its introduction, the cartridge was effective against point targets out to a range of 300 yards, and had the capability of area effect fire out to 600 yards.

The .45-70 was used in military service until being phased out soon after the Spanish-American War. This marked the real beginning for the .45-70, as civilian big-game hunters flocked to the cartridge. The heavy 405 grain FP bullet left the barrel travelling at 1,330 feet per second with a muzzle energy of nearly 1,600 foot pounds – easily harvesting bear, moose and bison at ranges inside 200 yards. The sheer power of the 45-70 has made it popular with hunting guides in Alaska who venture into bear country loaded with Trophy Bonded Bear Claw Federal 45-70 ammo in their lightweight lever-action rifles. Reloaders appreciate this cartridge for the ability to accept bullets weighing between 300 and 500 grains for a broad spectrum of uses. Some shooters have even used the .45-70 to take animals of the African "Big Five." Ammunition manufacturers today continue to produce this great cartridge, with Hornady offering their FTX bullet in this caliber, and several others offering ammo from their specialty JHP lines to hunters.

Today, Thompson Center Arms and Marlin manufacture single shot rifles and lever action rifles chambered in .45-70, as do several others. This cartridge is also chambered in what may safely be called the ultimate handgun – the Biggest Finest Revolver from Magnum Research is sold in .45-70. The cylinder has five shots and allows the hunter to experience the challenge of vintage cartridge handgun hunting, yet still have the ability to take quick follow-up shots if necessary.

The .45-70 became an important cartridge in the world of firearms when first introduced, and to this day it remains a great hunting cartridge for even the most dangerous game.