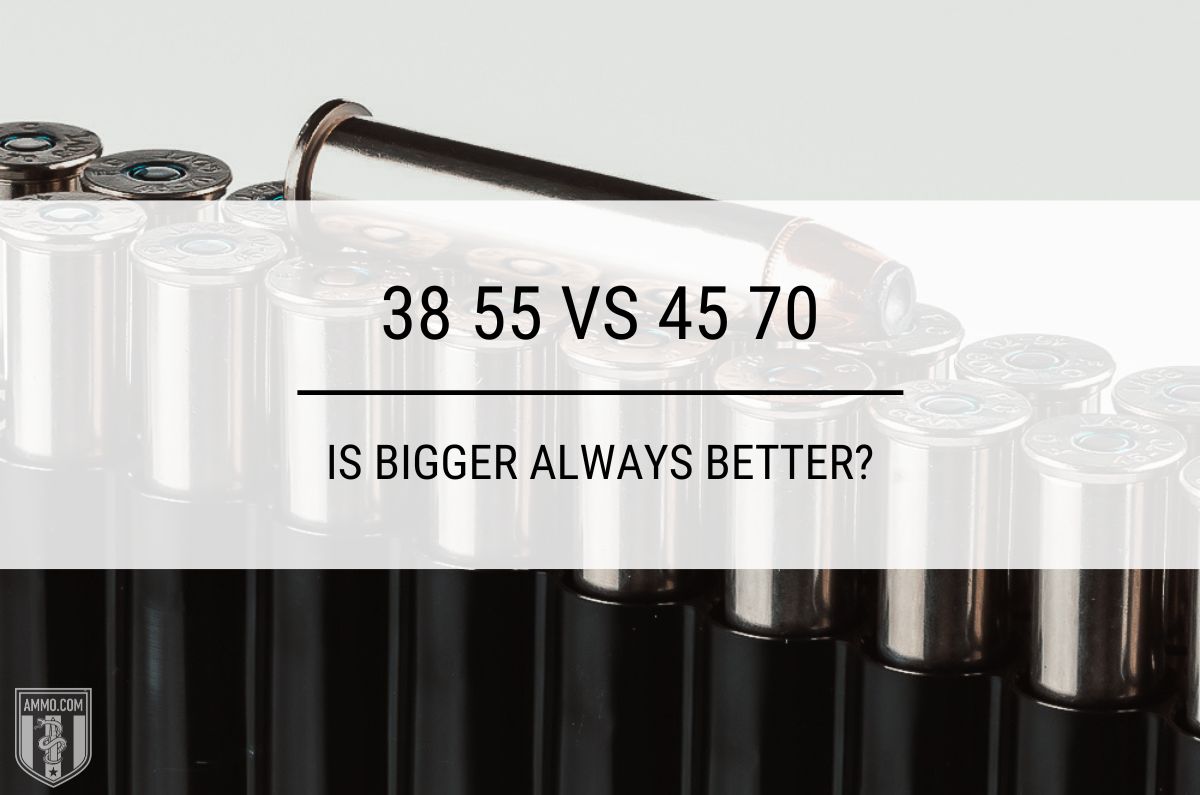 Few rounds are as iconic as the .45-70, which has withstood the test of time. Would you believe me if I told you there was another time-tested option with less kick?

The .38-55 Winchester is that option, but can it hang with its big-bore counterpart?

We're pitting the 38 55 vs 45 70 to see which one you should consider for your next rifle purchase.

The 38-55 is a medium-bore caliber, while the 45-70 is a big-bore rifle cartridge, so we should expect to see a considerable difference in cartridge specs and performance, but is that actually the case?

The differences in cartridge specs between these calibers are not as drastic as we might first assume. 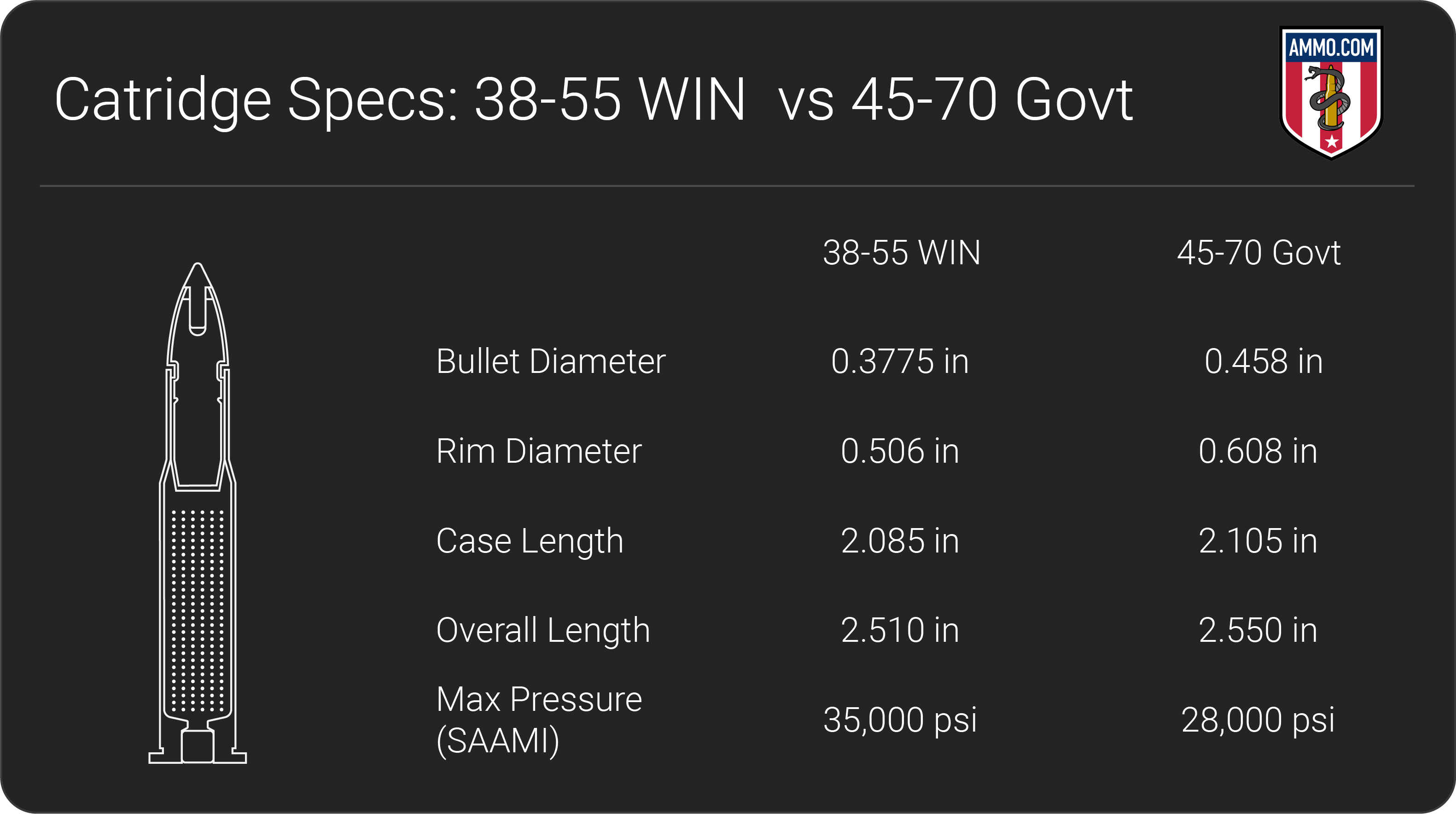 Now that we know the slight differences in the cartridges let's see how much this affects real-world applications.

Recoil varies depending on several factors. The gun weight, bullet size, and the shooter determine recoil.

Usually, the larger the bullet, the harder a gun kicks. If you have a heavier gun, it won't kick as hard because the weight of the firearm absorbs some of the recoil.

How well the shooter shoulders the rifle will also determine how much free recoil they feel. 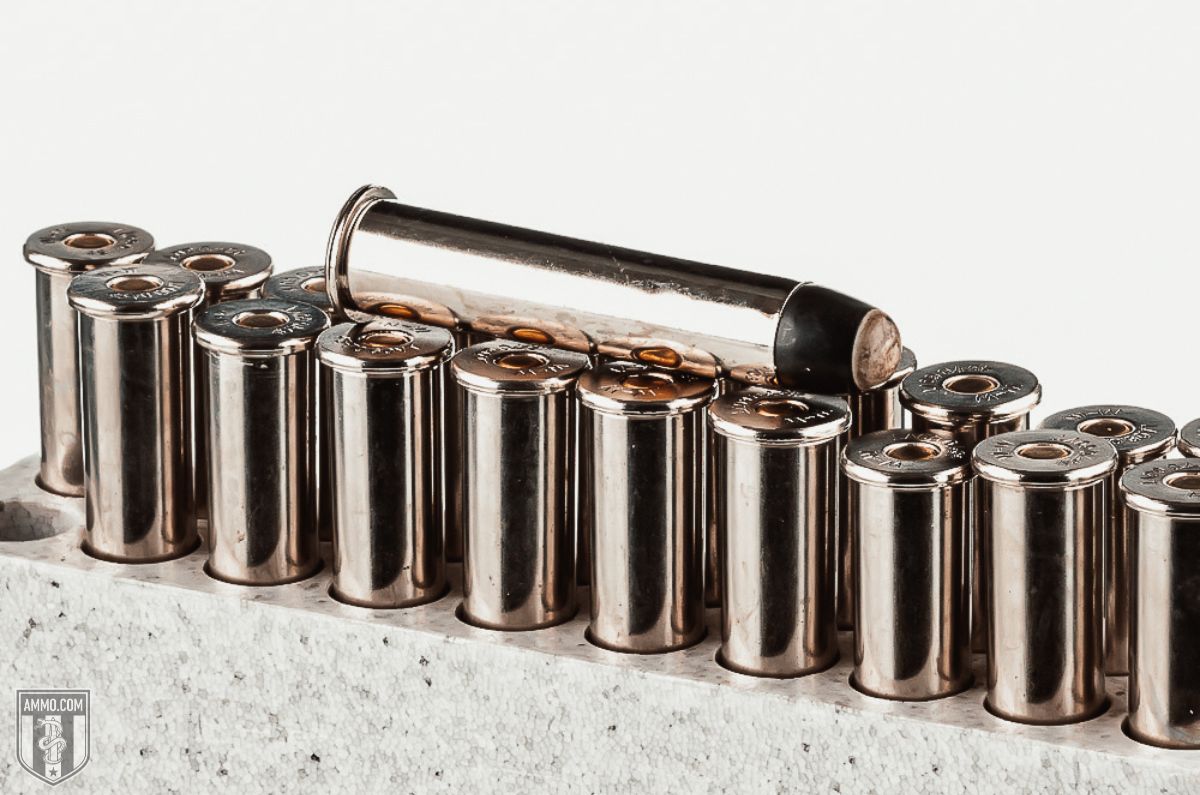 The trajectory is the measure of a bullet's path to the target. It is an arch due to gravity.

By modern standards, these calibers are not your typical long-range choices. For ethical hunting purposes, they both max out between 300-400 yards.

For target shooting, it's a different story.

It's good to keep in mind these are estimates and not hard facts because so many factors go into the bullet's trajectory.

Accuracy is another fickle comparison that depends on several factors.

In general, the less recoil a firearm has, the more accurate anyone can be with it. However, to complicate matters, it also depends on the bullet you are firing, as some guns like specific bullets better than others, depending on sight and weight. 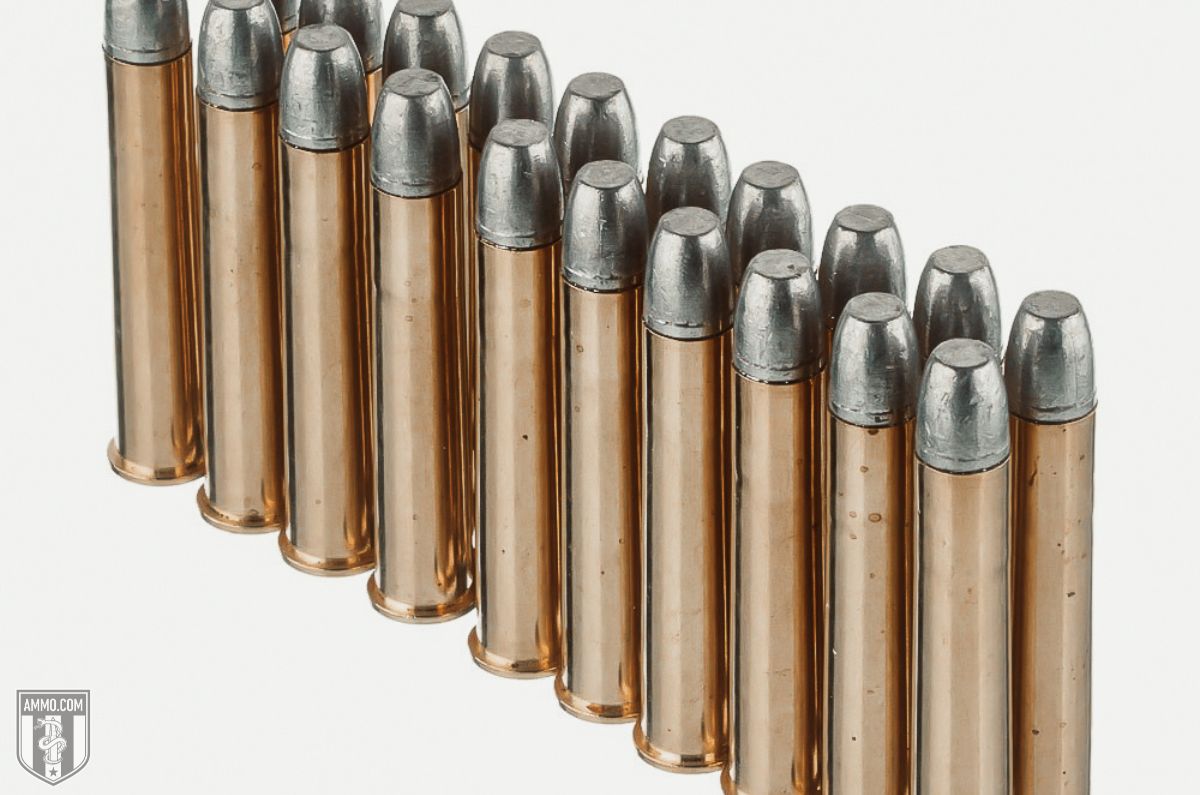 We can forget that it's much easier to be consistently accurate with a flat shooting round, so with all this in mind, which one is the most accurate?

I still lean towards the 38-55 because recoil affects the average shooter more than anything else.

Considering that we use the ammo that is best suited for each rifle, the average shooter will find it's much easier to be accurate with a 38-55 out to 300 yards.

Ballistic coefficient (BC) is a measure of the aerodynamics of a bullet and how well it resists wind drift.

The higher the number, the better it will deflect the wind. Typically, the heavier grain bullet will have a higher BC because it takes more force to move it off its path.

The exact BC will vary depending on the bullet you're firing, but you can expect it to be around .290 for 38-55 caliber bullets.

Though it's heavier, the .45-70 doesn't have a much higher BC for a majority of its bullet weights. You should expect it to max out around .296.

It's important to note that these calibers have a relatively low ballistic coefficient because they use flat nose bullets, which are much less aerodynamic than most modern bullet designs. 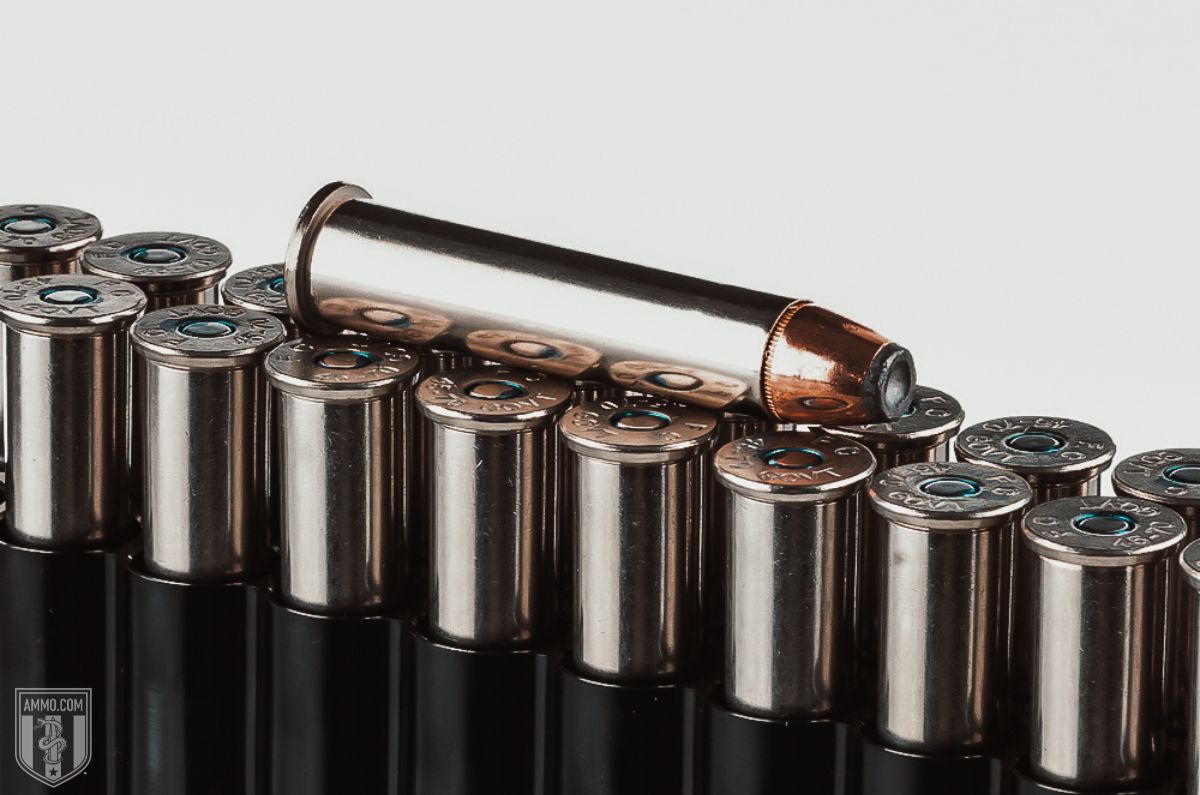 Stopping power is arguably one of the most debated topics in all firearms forums.

You have the shooters who say it doesn't matter since a well-placed shot with a small caliber can bring down any big game animal.

Then you have those of us who say not every shot is well placed, which is why stopping power is essential.

No matter what side of the argument you're on, there's no denying a bigger hole, and better penetration means more stopping power.

Sectional density (SD) is a measure of a bullet's ability to penetrate based on its design, weight, and dimensions.

The .45-70 Government wins this category.

Though these calibers were not designed initially as hunting cartridges, they've come to be loved by many hunters. 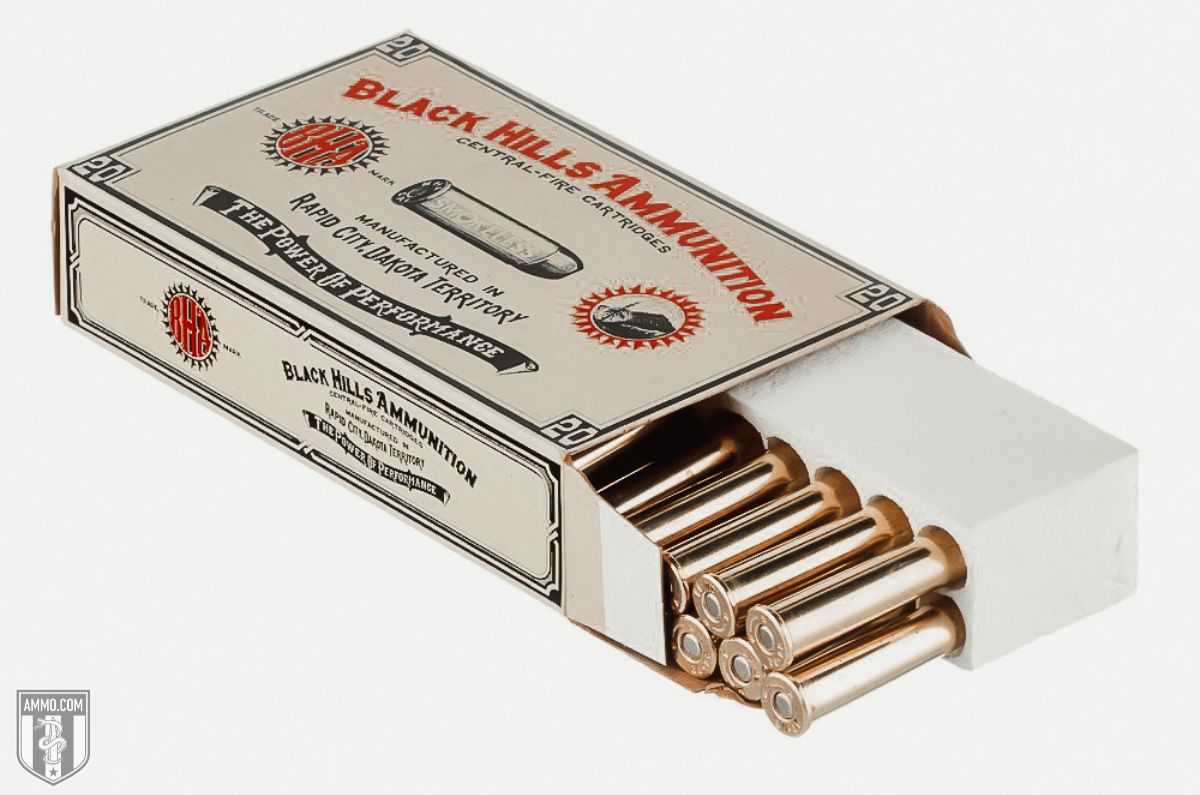 The 38-55 is best when deer hunting, black bear hunting, or varmint hunting at close ranges of 300 yards or less.

The 45-70 shines when big game hunting for brown bear, elk, and moose. However, it can be used when hunting whitetail deer and other medium-sized game without damaging too much meat.

However, if you only plan to hunt with these rounds, I would suggest reconsidering.

There are better rounds like the 6.8 Western or 6.5 PRC, designed for hunting that offer a more comprehensive range of applications, and they're more effective at longer ranges.

If you're sensitive to recoil, I would go with the 38-55 for hunting purposes.

However, if you're not as concerned with the recoil, the 45-70 is better because you can hunt a wider variety of animals with it.

I don't recommend either caliber for self-defense or home defense for several reasons.

The primary reason is that these calibers are most often chambered in single-shot rifles or lever-action rifles. This means you'll be forced to reload much quicker than most semi-auto guns. 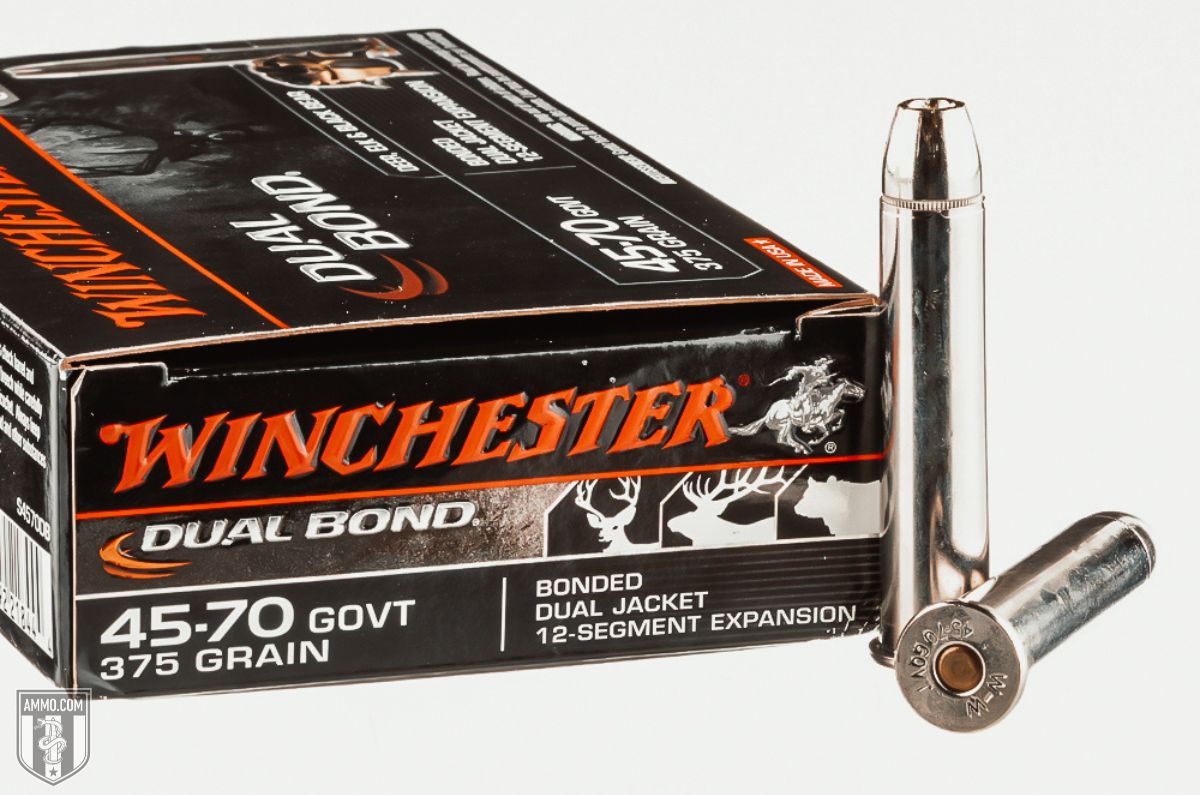 Another reason is that they're more likely to over-penetrate. You endanger your family and neighbors even if you shoot the intruder.

If you're worried about overpenetration, I suggest using a 12 gauge for home defense and a .45 ACP or 9mm for self-defense.

The one time I recommend the 45-70 as a self-defense firearm is when you're defending yourself against bears, but when protecting yourself from humans, there are many other better options.

If all you have is one of these guns to protect yourself, then, by all means, use it! I'm only saying I wouldn't use either caliber since I have other options.

Both calibers lose this section, so it's a draw.

Both calibers have been around for over 100 years, so it's safe to say the ammo is available in many places and manufactured by companies such as Winchester, Buffalo Bore, HSM Cowboy Action Ammunition, Remington, Hornady, and Barnes.

As far as pricing goes, neither is cheap to shoot. 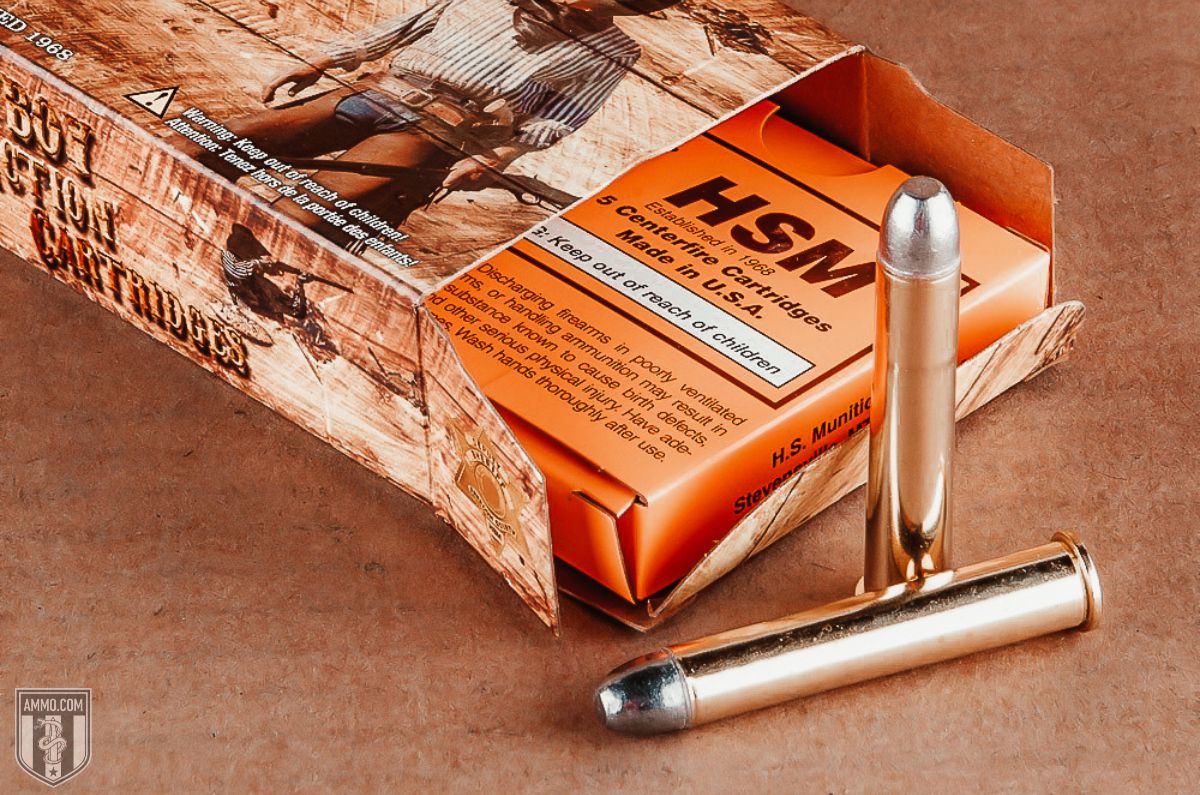 Despite both calibers being well established, more rifles are chambered in 45-70 than 38-55.

Henry, Cimmaron, Taylors & Company, and Winchester are the primary manufacturers of 38-55 rifles.

The prices are comparable; however, it's much easier to find an inexpensive .45-70 Govt rifle. 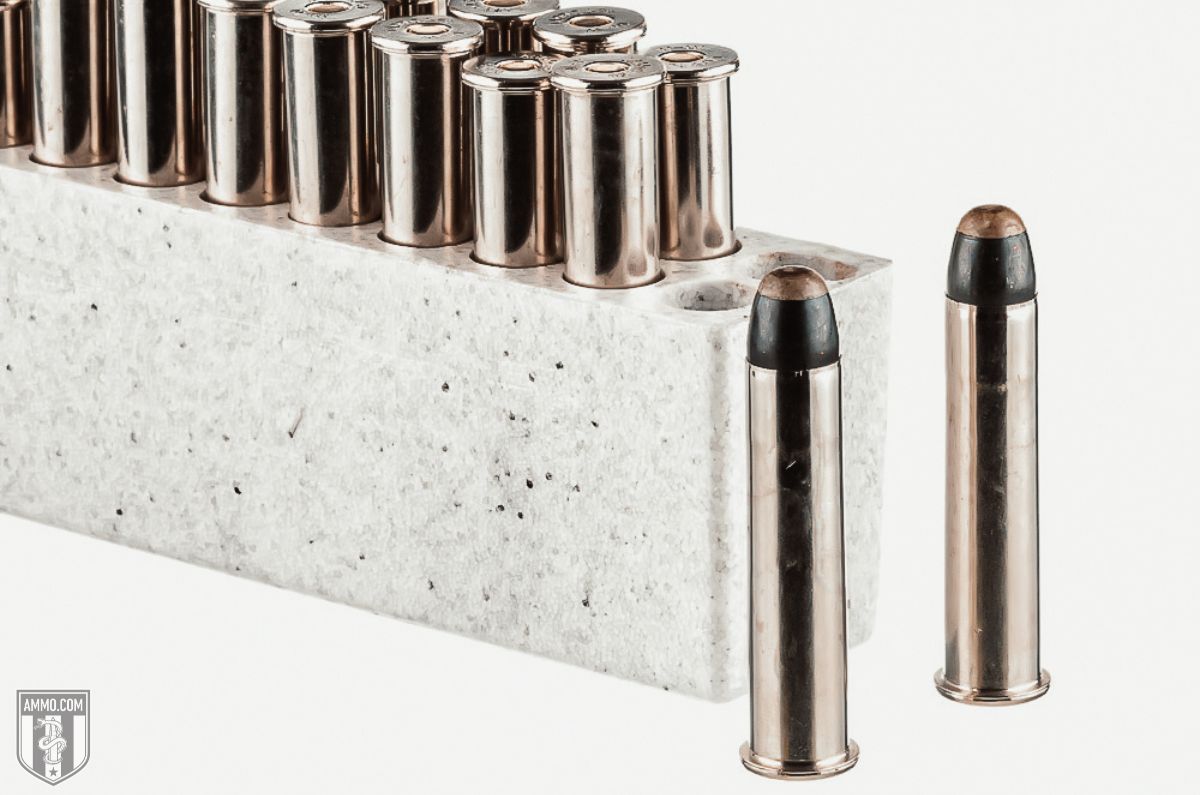 An excellent way to save money on ammo is to buy in bulk; an even better way is to reload.

Initially, it's more expensive because you have to buy the reloading press, dies, brass cleaner, and several other items, but if you shoot a lot, it evens out in the long run.

Handloading gives you control over the controllable variables.

Factory ammo isn't as consistent as hand-loaded ammo because factory loads have a range of allowable variances, whereas when handloading, you get to be as precise as possible.

This is why most competitive shooters reload their ammo.

Another reason to reload these calibers is that they're not commonly carried at most sporting goods stores.

Depending on your gun, you may or may not need hard-cast bullets to help it shoot more accurately. While they are available in factory loads, you have the option of pouring your own using a mold when reloading.

Reloading supplies and information for both rounds are readily available, so this section is a tie.

Below you'll find the ballistics of each caliber. Keep in mind this is generalized and won't be specific to the rounds you're firing and the gun from which you're firing them. 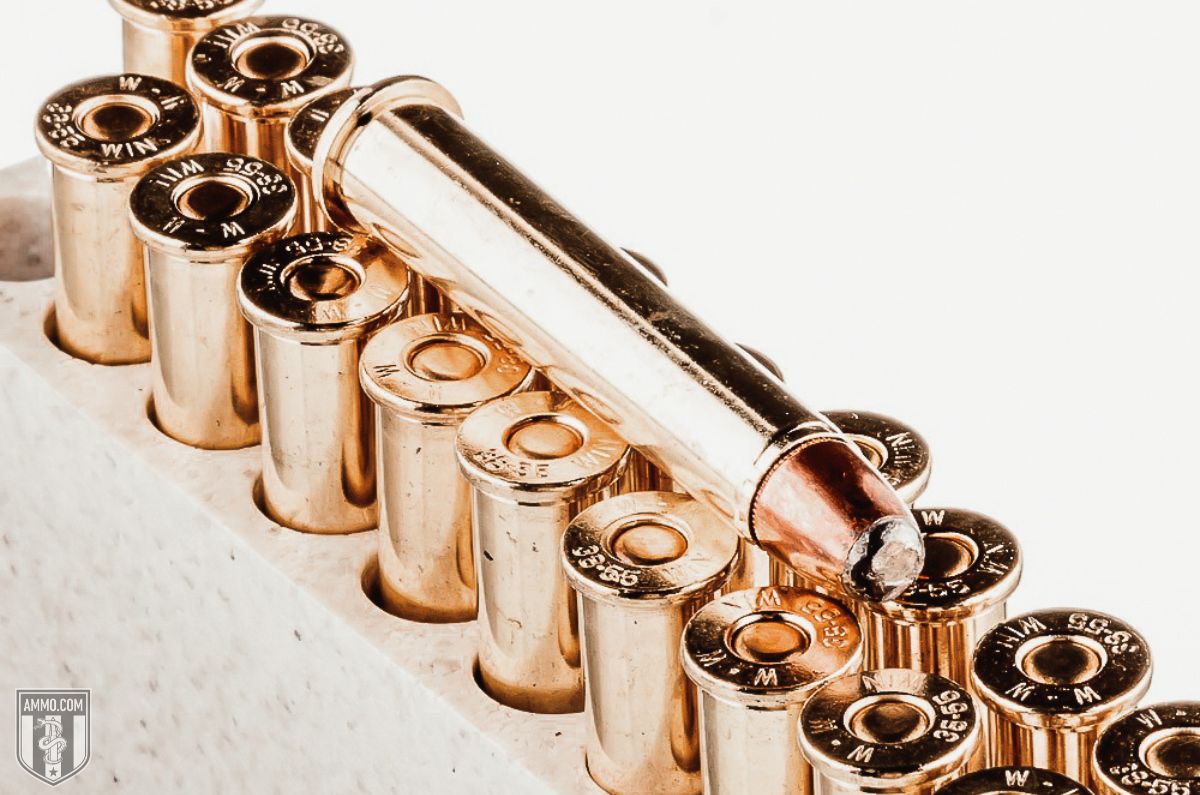 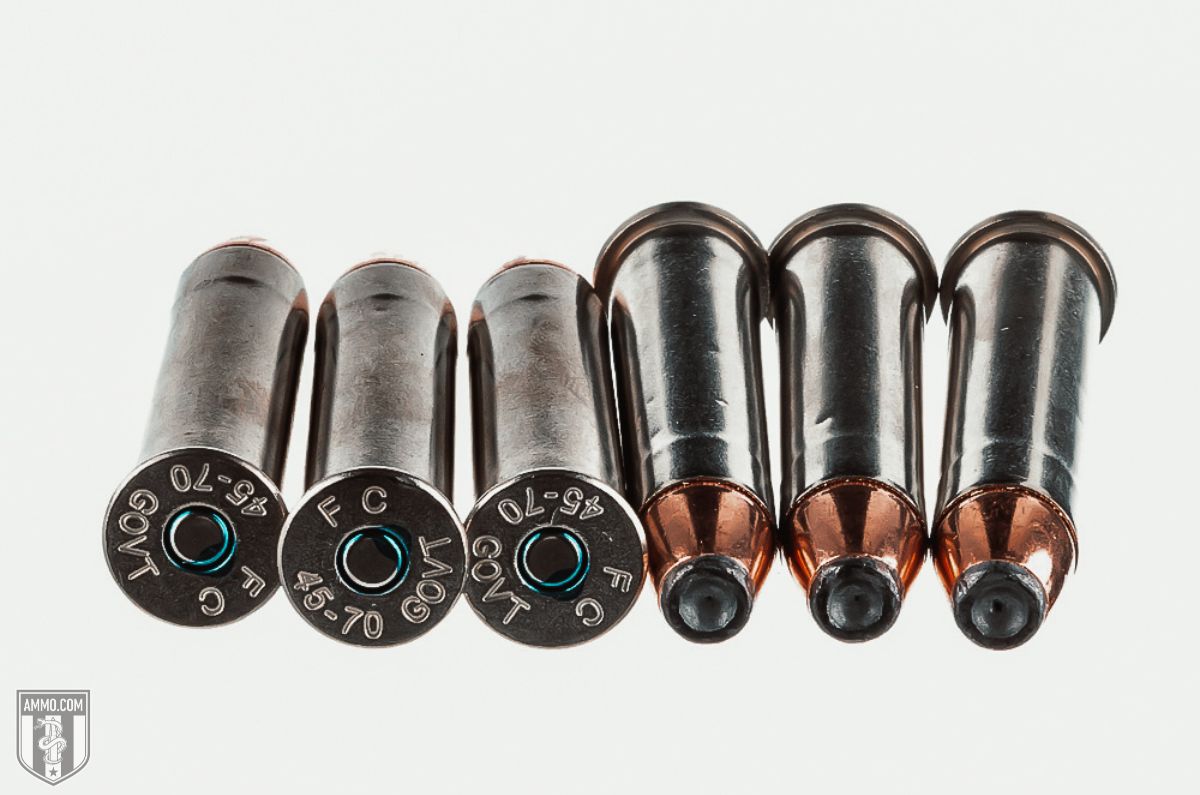 Marlin Firearms had various single-shot rifles and a lever-action chambered in .38-55. Winchester also had rifles chambered in this caliber until about 1940. Since then, Winchester has released a few commemorative edition rifles in 38-55.

The .375 Winchester is the modern version of the .38-55. However, it cannot be fired in older guns because it produces higher pressure than the older guns were not designed to withstand.

The .45-70 is a centerfire rifle cartridge that was developed at the Springfield Armory as a replacement for the .50-70.

In 1873, the .45-70 was chambered in the 1873 Springfield trapdoor action rifle. The military used the .45-70 until shortly after the Spanish-American War. After its end as a military weapon, it exploded in popularity amongst hunters and other shooting enthusiasts.

Magnum Research has a handgun chambered in 45-70. I only have two words for those willing to take a thumping from such a powerful handgun, "good luck."

It is one of the few cartridges that thrived after being converted from black powder cartridges to smokeless powder loads. 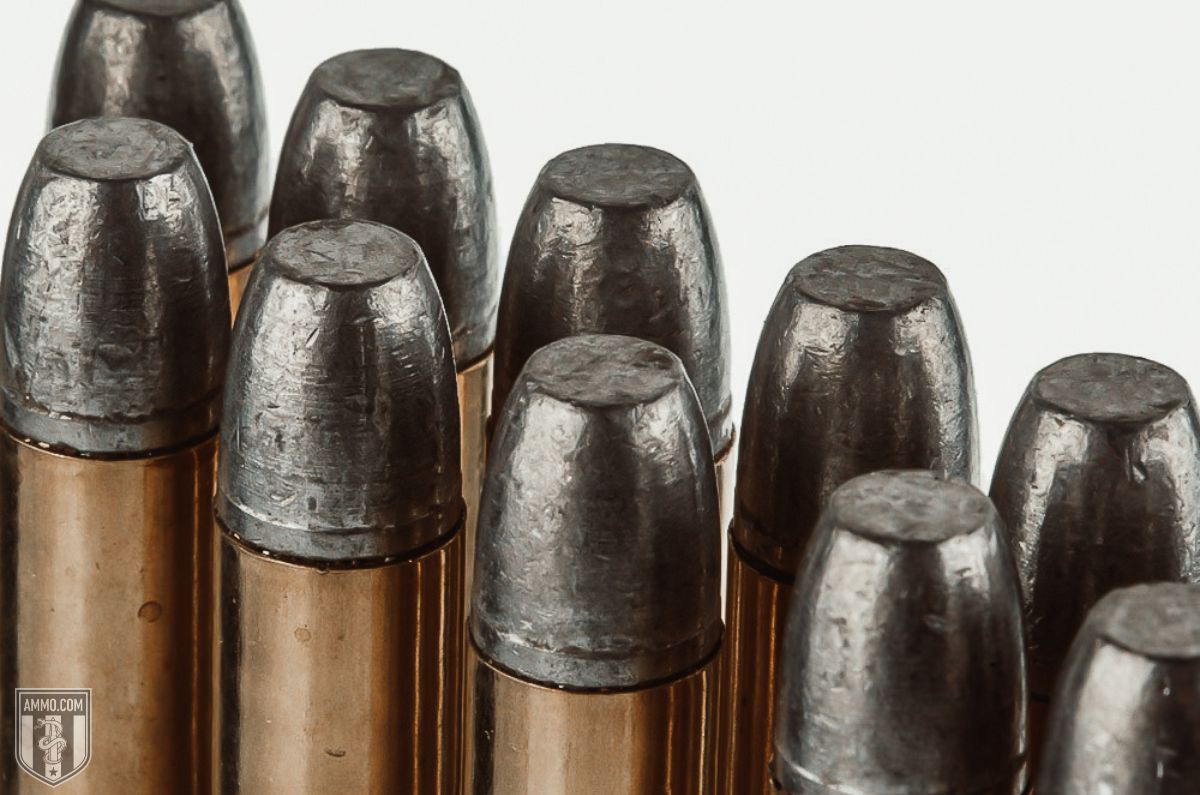 However, that doesn't mean you should rush out and purchase a .45-70.

The .38-55 is the better option for new shooters and those sensitive to recoil.

The .45-70 Govt is the best option for big game hunters, and shooting longer distances than the 38-55 is capable of shooting.