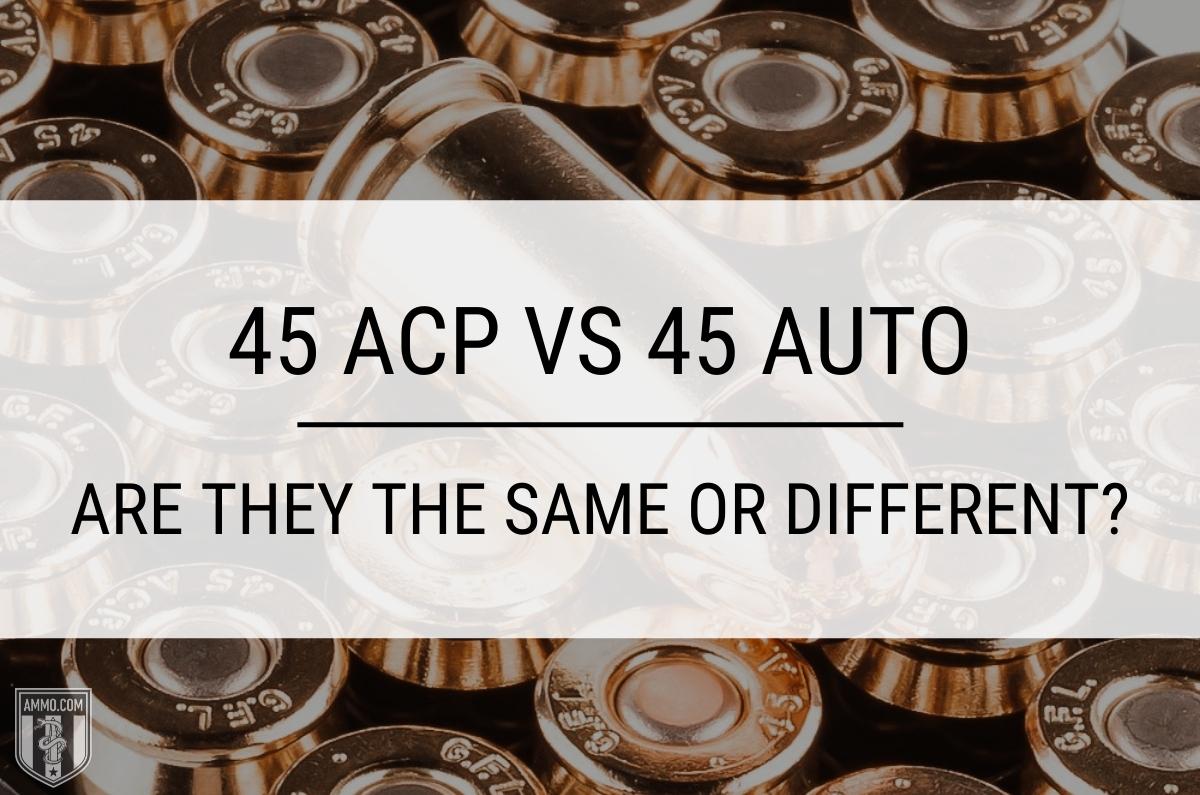 Handgun cartridge naming is an aspect of firearm ownership that can be confusing to new shooters at first – and if you decide to get yourself a full-size Sig Sauer 1911 or Glock 21, you might note on the barrel that it says, “45 Auto.” Excited to get some ammo for your new sidearm, you peruse the gun store shelves and are dismayed to only find boxes labeled, “45 ACP.”

Although they have different names, the 45 Auto and 45 ACP cartridge are the same.

So why is 45 Auto and 45 ACP labeled differently? We’ll get to that! In this article we’ll explain the differences in cartridge naming for the 45 ACP/45 Auto as well as explore some different varieties of 45 caliber handgun rounds.

The 45 ACP and 45 Auto are the same cartridge, there is no difference between them except for their name.

What Does ACP Stand For in 45 ACP?

The “ACP” in 45 ACP stands for Automatic Colt Pistol.

The 45 ACP was developed for the U.S. Army by the renowned American firearms inventor, John Moses Browning, in 1904. The U.S Army needed a new pistol round that had more stopping power as they were unsatisfied with the performance of their .38 Long Colt revolvers.

At that time, Browning was working for Colt to develop a new semi-automatic handgun for the U.S. military, and they chambered the new .45 caliber cartridge in what later was named the Colt Model 1911. The new pistol cartridge was dubbed the “.45 Automatic Colt Pistol”, or 45 ACP for short. 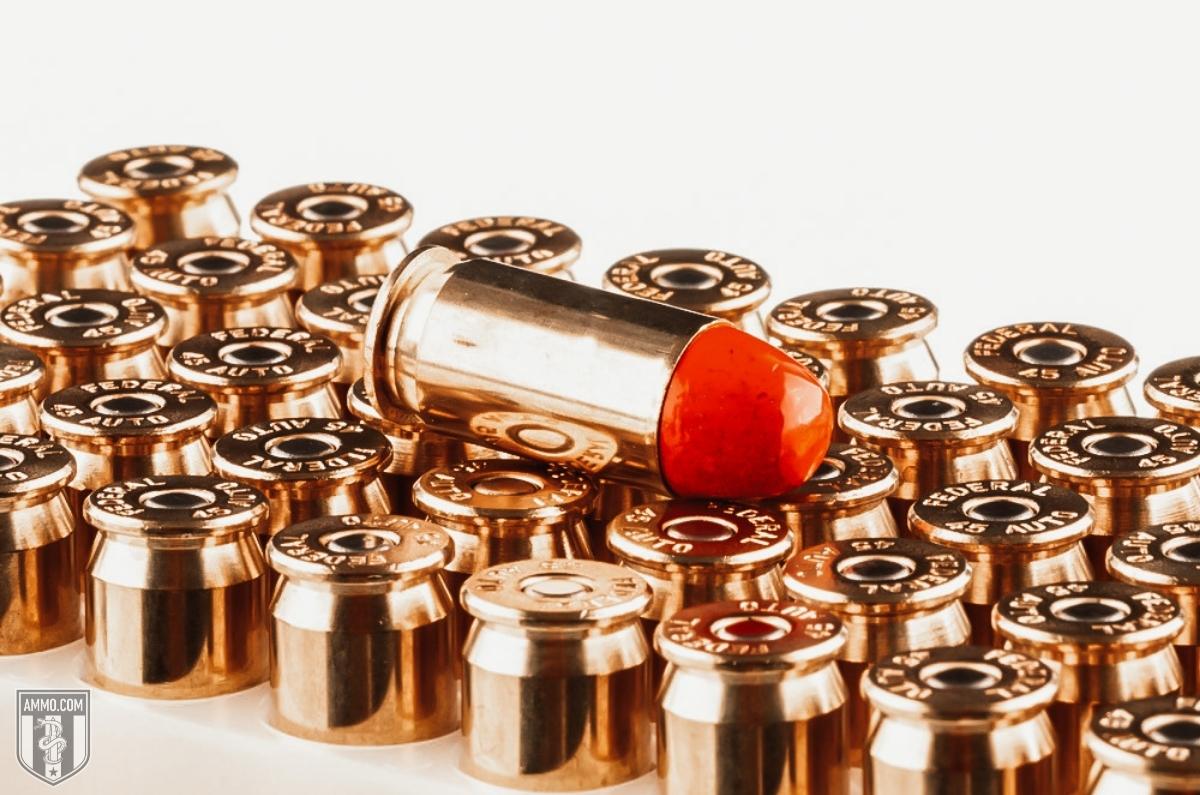 What is ACP Ammo?

The 45 ACP is a rimless centerfire handgun cartridge that is designed for use in a semi-automatic pistol. It fires a 45-caliber bullet (0.451” bullet diameter) between 185 and 230 grains. The 45 ACP cartridge has been popular with the U.S. military, law enforcement, and civilian concealed carry permit holders since its release.

After adoption by the U.S. Army in 1910, the Colt 1911 and the 45 ACP served in all branches of the U.S. military for the next 70+ years as the standard issue sidearm and ammo. It carried us through World War I and II, the Korean War, and Vietnam. It was not until the 1980s that the military decided to update their standard issue sidearm and opted to move towards the Beretta M9 and the 9mm Luger cartridge as it had less recoil and higher magazine capacity than the stalwart 45 ACP.

Since its inception, the 45 ACP was known by that name, but in 1926 everything changed. This was the year that the Sporting Arms and Ammunition Manufacturers’ Institute (SAAMI) was founded, and their goal was to standardize the shooting industry. This is a good thing, as it means that ammo purchased from Remington must be within the same set of parameters as the ammo produced by Hornady, Winchester, Federal, or Sig Sauer.

There’s no doubt that the founding of SAAMI was a good thing for the shooting industry. But one thing that was not so helpful was their refusal to have any type of trademarked name in their database to avoid any legal issues. As the 45 Automatic Colt Pistol was trademarked, SAAMI refused it under that name. Therefore, an identical cartridge with the exact same specs as 45 ACP was submitted under the name of “45 Automatic” or 45 Auto for short. 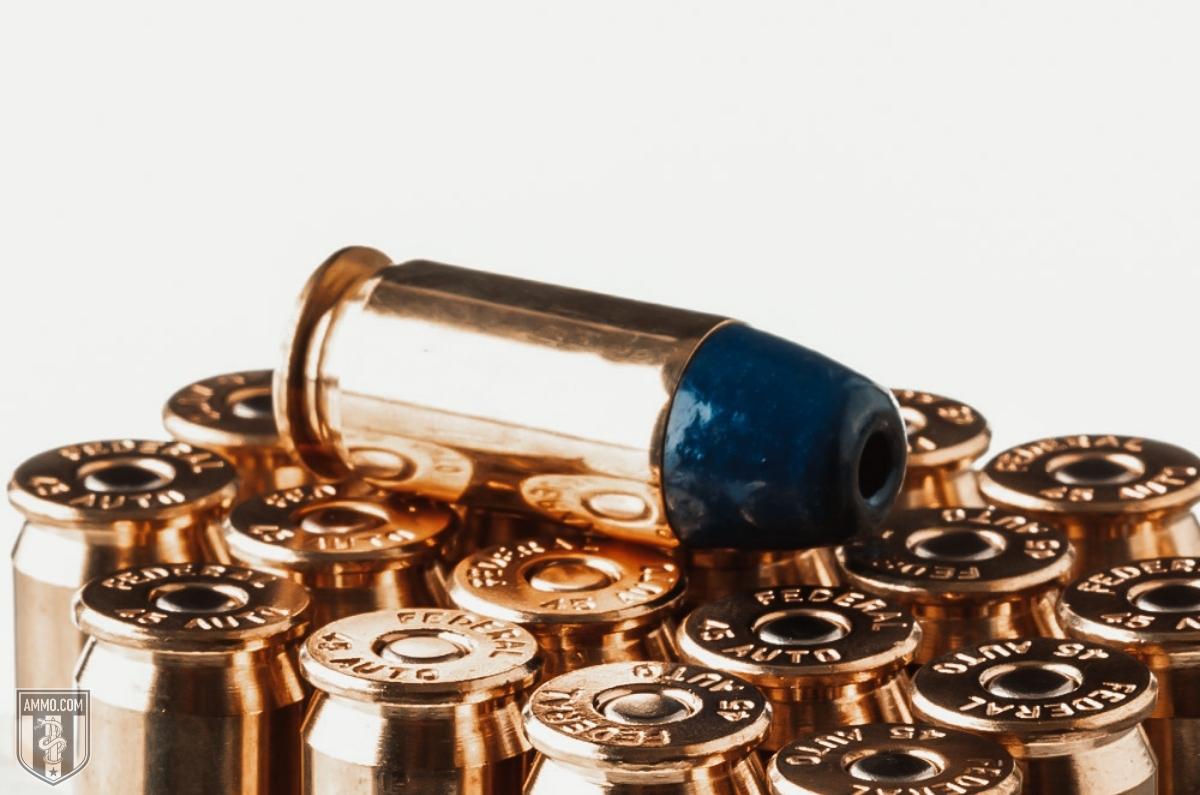 This is how the 45 ACP came to have two names for the same cartridge. And the 45 ACP/45 Auto is not the only pistol round to multiple names. The same thing happened with the 9mm Parabellum, the most prolific handgun round in the world and George Luger’s pride and joy. As 9mm Parabellum was trademarked, the design submitted to SAAMI was dubbed the 9mm Luger. And to make matters worse, once the 9mm Luger was accepted as a NATO cartridge, it became known as the 9x19mm NATO.

To complicate things further, there are cartridges that share the same caliber but are completely dissimilar from each other. Take for example the 357 SIG and 357 Magnum, 9mm Luger and 9mm Makarov, or even the 38 Super and 38 Special. All the caliber pairs listed above have the same caliber name but completely different cartridge specs and are not related or interchangeable.

Therefore it is so important to understand how cartridges are named and to know what your semi-auto handgun or revolvers are chambered in.

What are Some Different 45 Caliber Handgun Cartridges?

In any self-defense situation, you want to know that the ammo you are carrying has the stopping power to get the job done. Although stopping power is somewhat of a ubiquitous term with no empirical measurement system, many ammo manufacturers offer over-pressure rounds called “+p” (read: plus p).

Ammo designated as +p is rated for higher-than-normal maximum pressures as designated by SAAMI. Once +p rounds started to become more popular, it didn’t take long for a 45 ACP +p offering to hit the market.

Standard 45 ACP ammo is rated for a maximum chamber pressure of 21,000 psi, while 45 ACP +p is rated for 23,000 psi (about a 10% increase). This added pressure means higher velocity, more ft-lbs of muzzle energy, and deeper penetration.

If you own a modern 45 ACP pistol, it is most likely capable of firing +p ammo. However, if you are unsure, it is best to consult your owner’s manual or contact the manufacturer before firing +p ammo through your handgun. Using +p ammo in a sidearm that is not rated for it can have disastrous results, potentially damaging the firearm and the shooter. 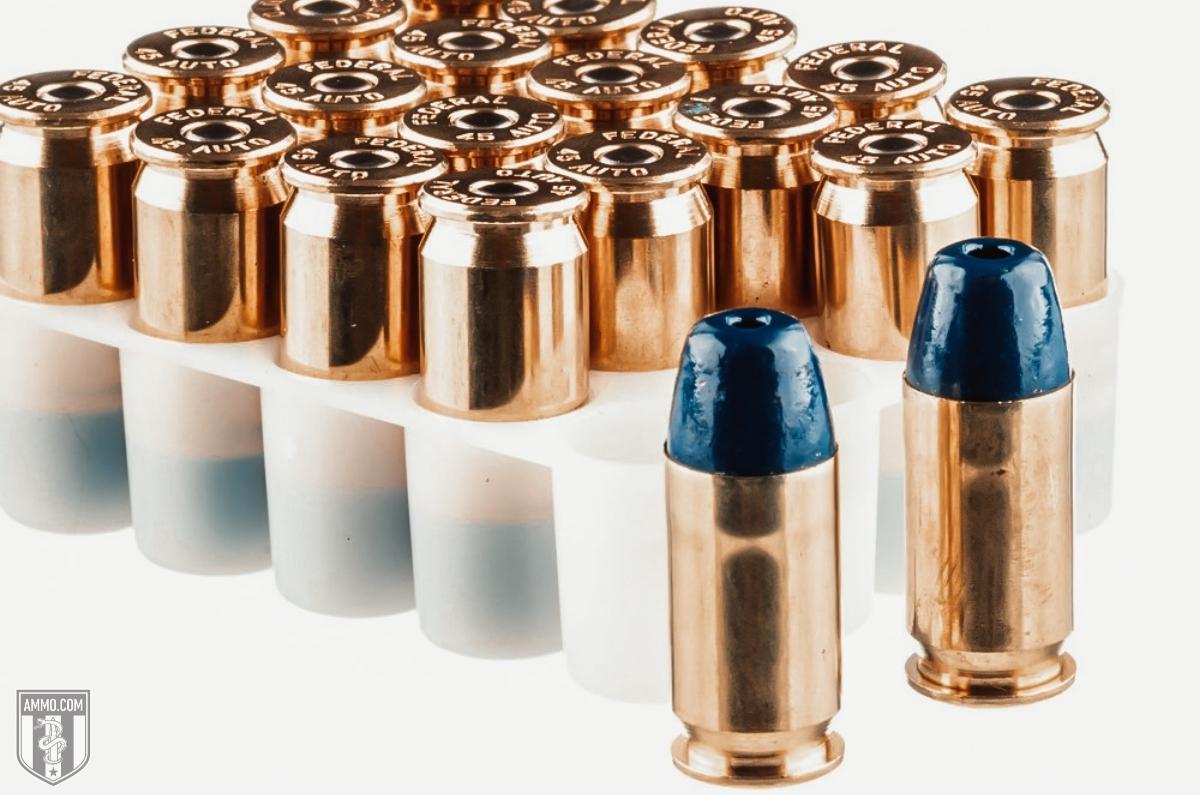 The 45 Long Colt is most famous for being chambered in one of Colt’s most iconic revolvers of the age, the Colt Single Action Army. Also known as the “Peacemaker” it was the revolver of choice for many law enforcement officers of the time, including the legendary Wyatt Earp.

The 45 Long Colt and Single Action Army remained popular with the cavalry until the development of the 45 Smith & Wesson Schofield and subsequent adoption by the military in 1879 (more on that below).

Today, 45 Long Colt is still used today in Cowboy Action Shooting sports as well as in combination revolvers like the Taurus Judge and Smith & Wesson Governor.

The .45 Smith & Wesson Schofield was developed in 1875 and is a rimmed revolver cartridge. It was designed in conjunction with the M1875 Schofield top break revolver and adopted by the U.S. Military shortly thereafter.

The new top break revolvers allowed cavalrymen to reload their revolvers in under 30 seconds, essentially half the time of the Colt Single Action Army. The 45 Schofield has less recoil than the 45 LC as it is a shorter cartridge and carries less powder. Lower recoil generally leads to increased accuracy and shootability, and by 1874 only 45 Schofield ammo was being distributed to military units.

Thankfully, the external dimensions of the 45 Schofield were the same as the 45 LC except for the cartridge length. This allowed 45 Schofield ammo to be safely fired from 45 LC revolvers, similar to how a 38 Special can be fired from a 357 Magnum.

After serving for nearly 20 years, the 45 Schofield was replaced by the 38 Long Colt in 1892. The Schofield is now considered an obsolete cartridge and is not in production except by custom ammo producers. However, the ballistics of the 45 Schofield were the foundation by which the 45 ACP was designed.

In 1917, Colt released the M1917 revolver chambered in 45 ACP. As the 45 ACP was a rimless cartridge, the revolvers required the use of moon or half-moon clips to facilitate extraction and proper headspacing. These revolvers were issued to US troops in World War I to supplement the distribution of the M1911.

Although the half-moon clips were effective, they were easy to lose or misplace. If this were to happen, there are two potential issues. The first is failure to extract. Without a rim to hold onto, the extraction arm has nothing to grip and therefore rounds would have to be ejected from the cylinder one at a time with a field expedient object (think pencil). The second issue would be headspace. As the 45 ACP has no rim for headspace, it’s possible that a round could slip into the chamber and fail to fire.

To fix these issues, the Peters Cartridge Company developed the 45 Auto Rim in 1920. This new round was nothing more than a 45 ACP with a rim.

The new ammo allowed for the rounds to be fired and ejected without the use of a moon clip. 45 Auto Rim is compatible in revolvers chambered in 45 ACP, however it should not be used in a semi-automatic 45 ACP pistol. 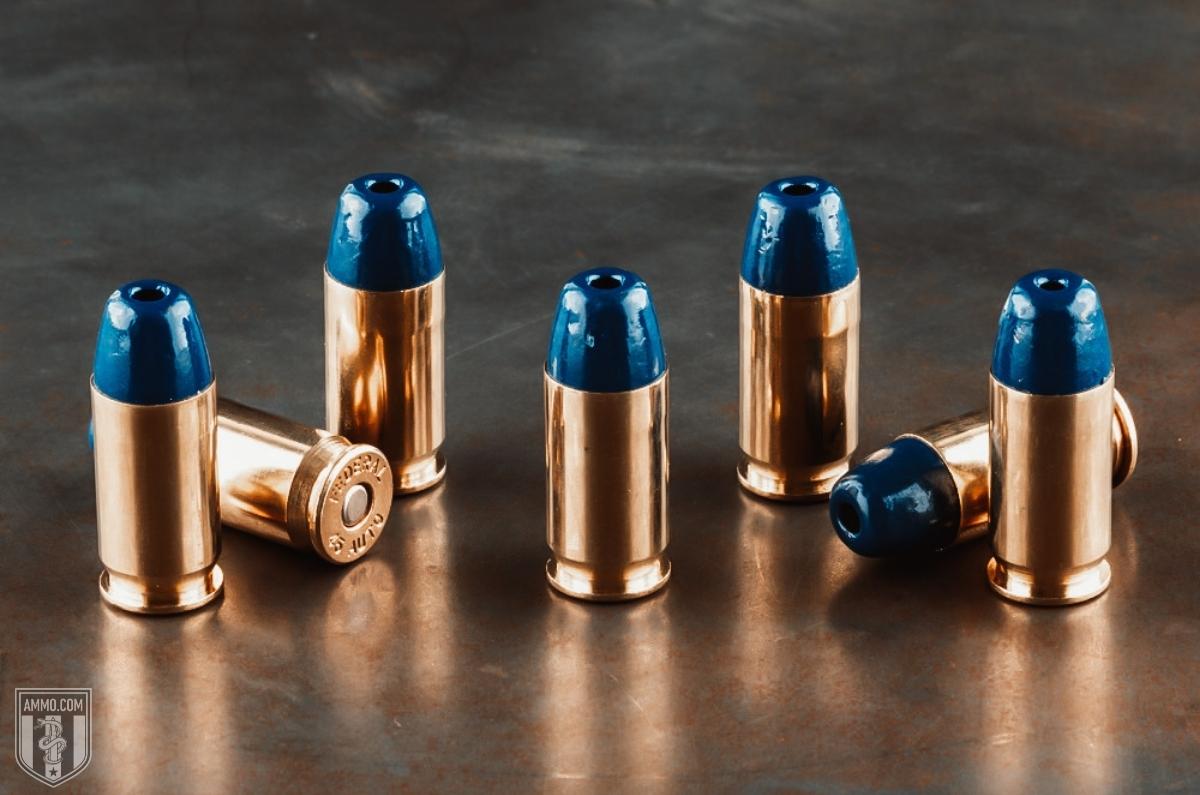 The 45 Glock Automatic Pistol was developed in 2003 by CCI/Speer at the behest of Glock to duplicate the performance of the 45 ACP but in a smaller cartridge case so it could fit in smaller handguns.

Roughly equivalent to 45 ACP +p ammo, the 45 GAP has a smaller case volume but higher operating pressure to closely mimic 45 ACP ballistics. Although the 45 GAP has the same bullet diameter as its parent cartridge, it was designed to fire a lower bullet weight to allow for higher muzzle velocity.

A 45 GAP can fire a 200 grain Speer Gold Dot jacketed hollow point at 1050 fps with 490 ft-lbs of muzzle energy. The 45 GAP can fire the traditional 230 grain bullet, but it pushes the 45 GAP to its limits in terms of pressure.

Although the 45 GAP was technically successful at duplicating 45 ACP ballistics in a smaller package, the round simply did not take hold in the commercial or law enforcement market. Several small police departments still use the round, but most departments have move back to either 40 S&W or 9mm Luger for their duty ammo. 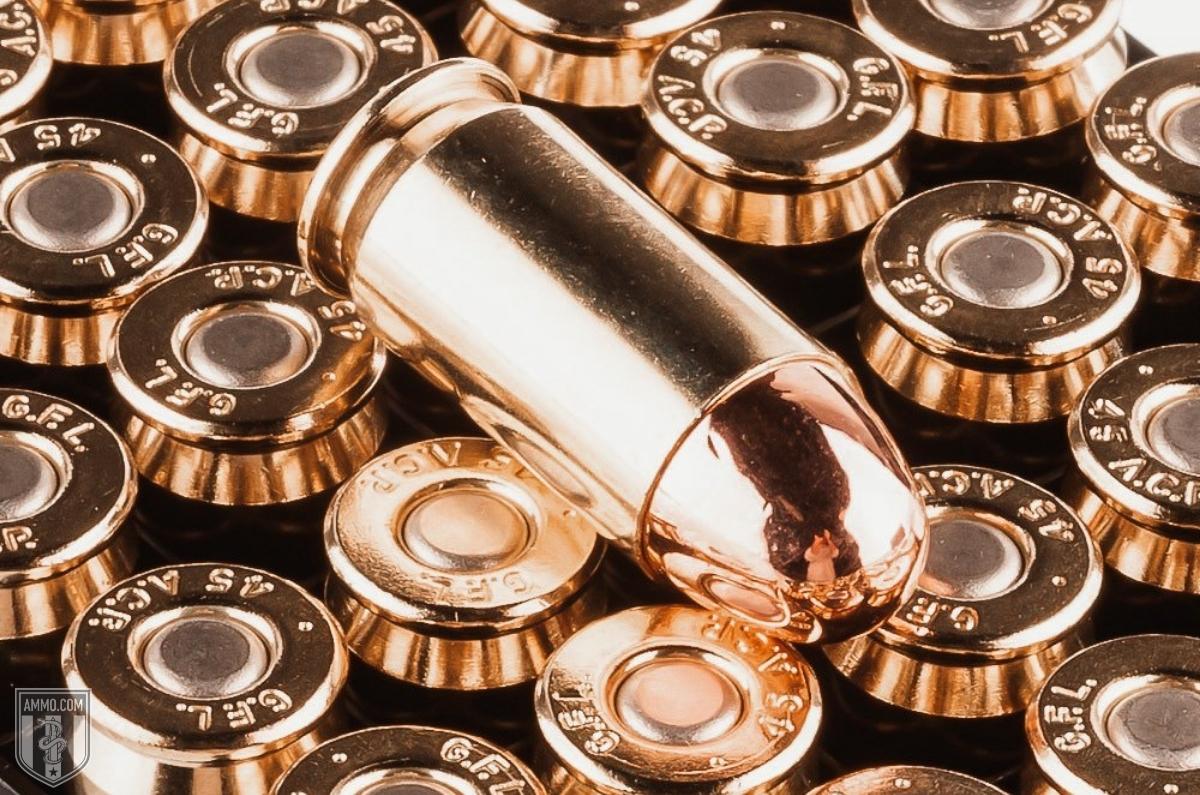 Glock is the only firearms manufacturer that currently has offerings in 45 GAP, but they only do small runs each year of their Glock 37, 38, and 39 sidearms.

There’s no denying that cartridge naming conventions can sometimes be confusing. No matter where you are in your firearms journey, understanding what round your handgun is chambered in is critical to a safe and enjoyable shooting experience.

Although they have different names, the 45 ACP and the 45 Auto are the exact same cartridge. The 45 ACP might be one of many entries into the lauded history of 45 caliber handgun cartridges, but it is truly “America’s Cartridge”.

Buying in bulk is always smart, make sure to check out our stock of bulk 45 ACP ammo.

And so long as there is breath in our lungs and the beating heart of patriotism in our chest, there will be 45 ACP/45 Auto ammo on gun store shelves ready to defend freedom should the moment arise.