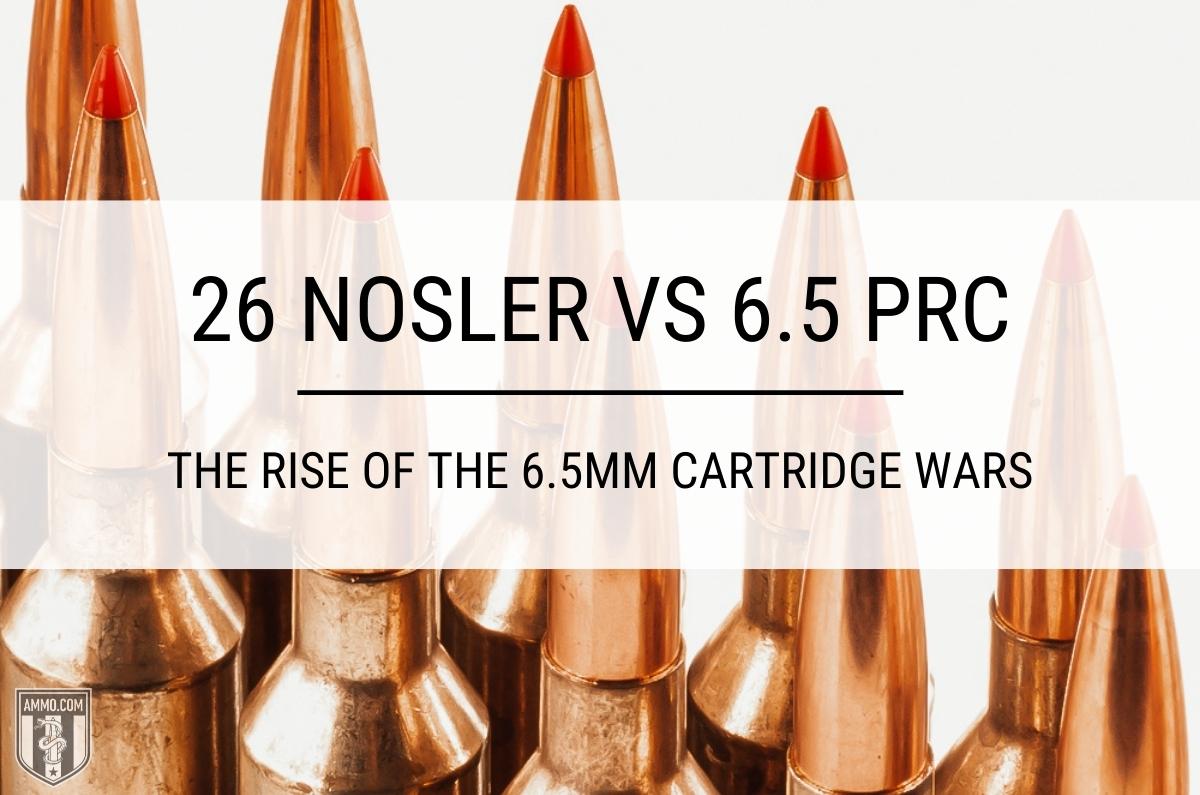 The release of the 6.5 Creedmoor by Hornady in 2007 signaled a change in North American shooting culture. For over a century, the 0.308” diameter bullet was the go-to option for long-range shooting, as the 300 Win Mag and 308 Winchester were the preferred precision rifle cartridge for many competitors.

With shooters warming up to the Creedmoor and finally discovering that 0.264” (6.5mm) caliber bullets had lower recoil and higher ballistic coefficients than their 30-cal counterparts, a flurry of new cartridges started hitting the market. The 6.5mm cartridge wars had begun, and multiple manufacturers looked to improve upon the success of the 6.5 Creedmoor.

Two such new cartridges that were designed to push the limits of the 6.5mm bullet are the 26 Nosler and 6.5 Precision Rifle Cartridge (PRC).

Although these two centerfire rifle cartridges fire the same diameter bullets, they each have their own nuances that make them ideal for different situations.

In this article, we will analyze the difference between 26 Nosler and 6.5 PRC so that you have a better understanding of which cartridge is best for your next precision or hunting rifle.

What is the difference between 26 Nosler and 6.5 PRC?

The major difference between 26 Nosler and 6.5 PRC is that 26 Nosler has a larger case capacity and therefore has a higher muzzle velocity than 6.5 PRC when firing similar bullet weights. 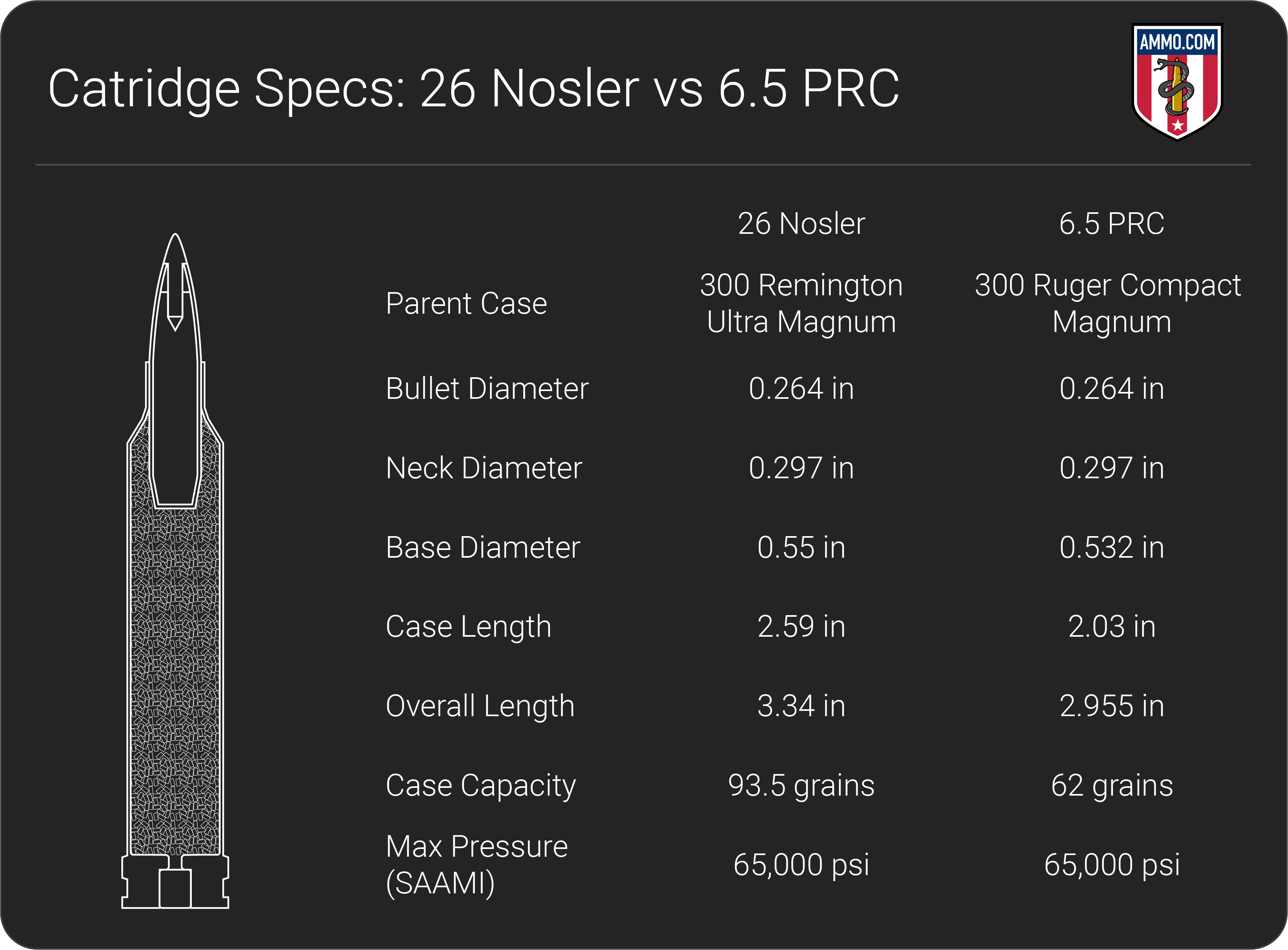 The differences in overall length affect the action length each cartridge fits in. As the 26 Nosler is longer, it will fit into a standard length action while the 6.5 PRC will fit into a short action.

Although both rifle cartridges fire the same 0.264” diameter projectiles, they both descended from 30-caliber magnum cartridges. The 6.5 PRC was developed using the 300 Ruger Compact Magnum while the 26 Nosler is descended from the 300 Remington Ultra Magnum. The 26 Nosler was the first of four different cartridges Nosler developed from the 300 Rem Ultra Mag; the 28 Nosler, 30 Nosler, and 33 Nosler being the other three.

Although the 26 Nosler has 50% higher case capacity, both cartridges are rated at the same maximum chamber pressure of 65,000 psi as established by SAAMI.

When comparing similar bullet weights, the 26 Nosler will have more recoil than the 6.5 PRC.

All that case capacity comes at a price for the 26 Nosler, and that price is recoil. Although felt recoil will be different from shooter to shooter, free recoil is a good measure of how much force is put back on the shooter when they pull the trigger. 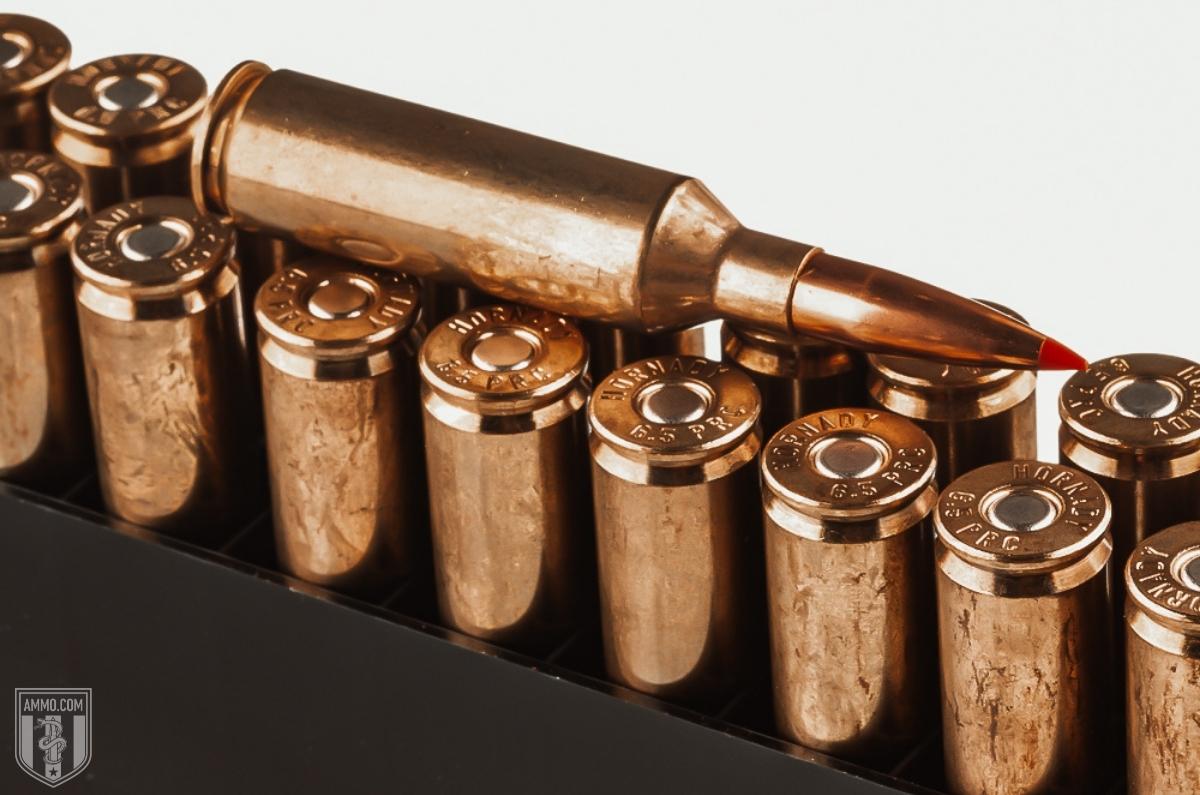 When it comes to muzzle velocity, kinetic energy, and trajectory, the 26 Nosler is superior to the 6.5 PRC in all three categories.

With its increased case capacity, the 6.5 PRC simply cannot keep up with the speed and power offered by the 26 Nosler. However, both cartridges are designed to maintain sub-MOA accuracy in long-range hunting and competitive settings.

For this comparison, we will use the same bullets as discussed in the previous section and assume a 100 yard zero and a 24 inch barrel.

At range, the disparity between the two rifle cartridges becomes wider. 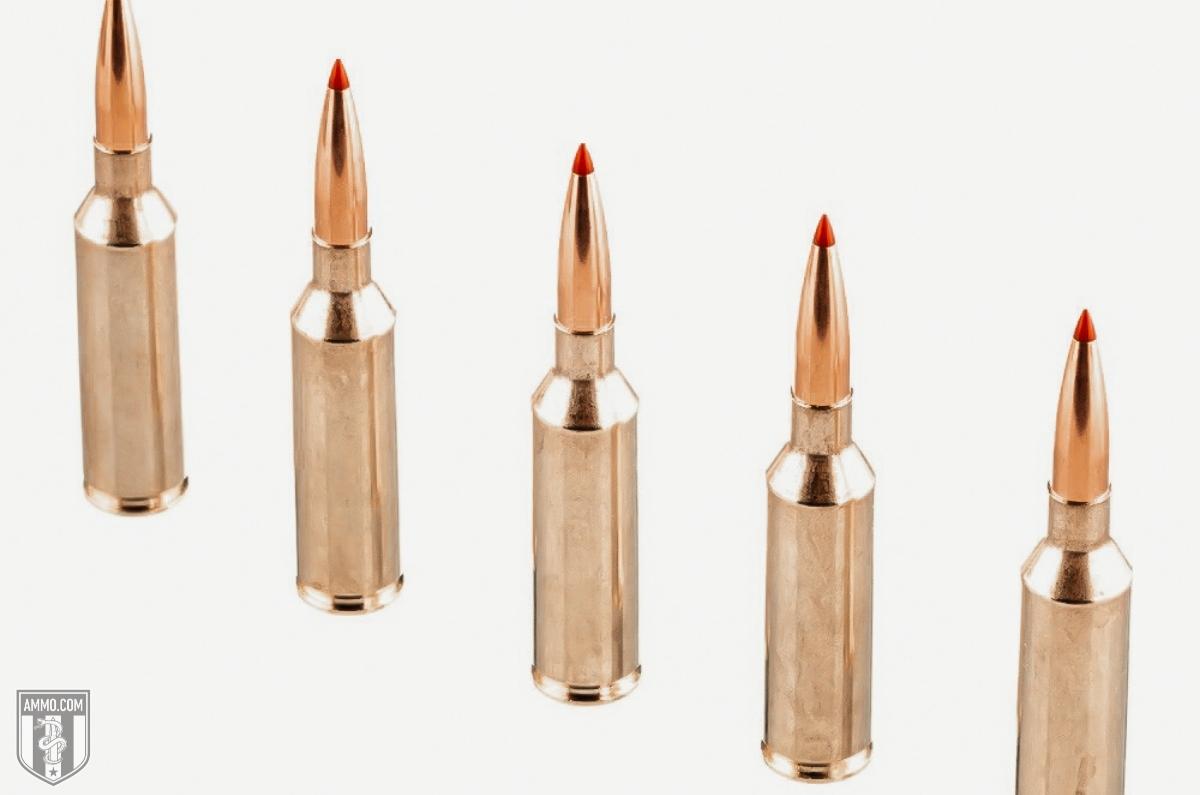 To put that another way, the 26 Nosler is moving about 25% faster, hits almost 50% harder, and has dropped almost 6 feet less than the 6.5 PRC at 1,000 yards. Comparing it to another cartridge, the 26 Nosler has higher muzzle velocity and kinetic energy than a 260 Remington (another 6.5mm cartridge) has at the muzzle.

In terms of supersonic limit, the 6.5 PRC drops below the speed of sound around 1,650 yards. However, the 26 Nosler continues to impress and can remain supersonic past 2,000 yards (that’s over a mile).

There’s no denying that 6.5 PRC ballistics are impressive, but the 26 Nosler ballistics are extremely impressive and one of the main reasons why it is a favorite of long range competitive shooters and hunters.

There’s no denying that 26 Nosler dominates in terms of ballistics, however all that case capacity it uses to hurl those 6.5mm projectiles at insane muzzle velocities will often do a number on barrel life. However, both cartridges are known for being harsh on barrels. 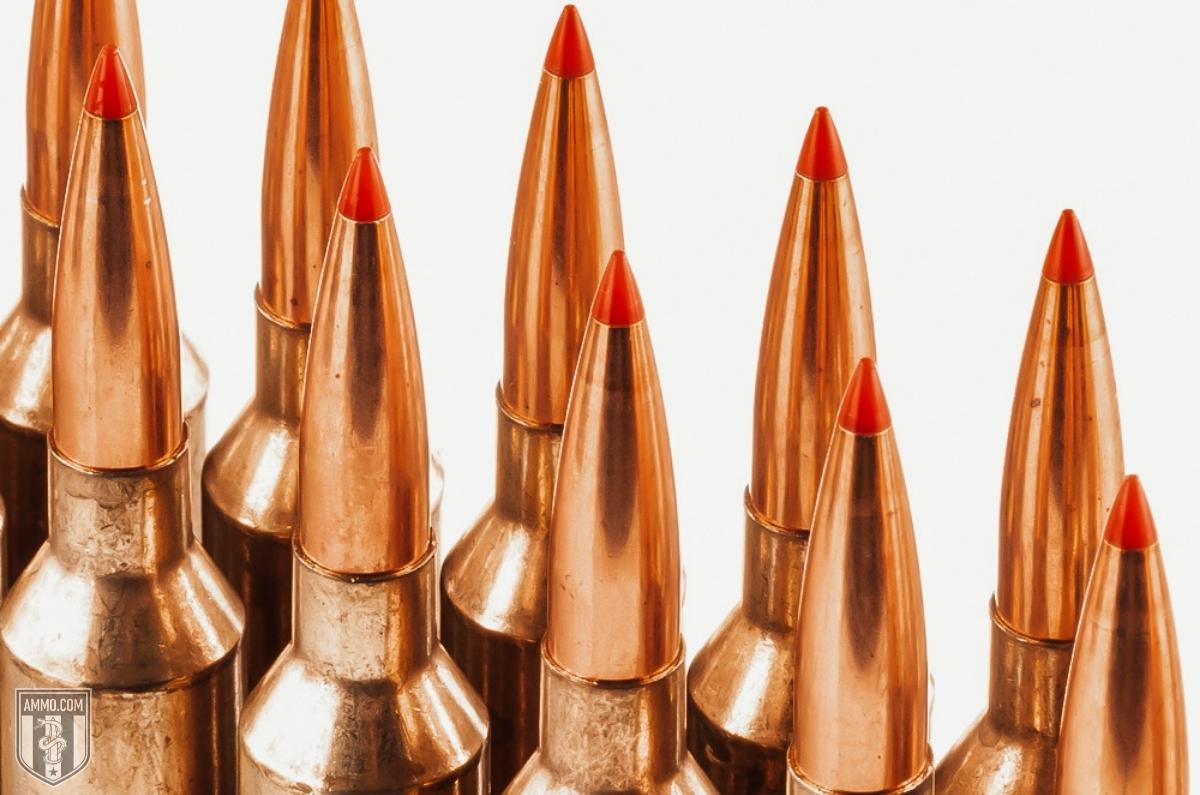 Barrel life is somewhat subjective, but the general consensus is that the 26 Nosler has a barrel life around 1,000 rounds depending on how hot you handload them. That’s not very impressive, as load development for a precision rifle takes quite a few rounds. On the other hand, the 6.5 PRC has an estimated barrel life between 1,000 and 1,500 rounds, again, nothing to get excited about.

Barrel life can be extended by handloading ammo below 60,000 psi and avoiding maximum or compressed powder charges. Furthermore, taking time between shots and allowing the barrel to cool will also help extend its life.

However, the reputation that both cartridges are “barrel burners” is relatively accurate as the 6.5 Creedmoor has a barrel life reported around 3,000 rounds.

The 26 Nosler continues its ballistic dominance as it generally has higher ballistic coefficients than the 6.5 PRC, however sectional densities will be similar for both cartridges.

Ballistic coefficient (BC) is a measure of how aerodynamic a bullet is and how well it will resist wind deflection. Sectional density (SD) is a way to evaluate the penetration ability of a bullet based on its external dimensions, design, and weight.

The 6.5mm caliber bullets are known for having an incredibly high BC, as their long and slender design is very aerodynamic and very efficient at resisting wind deflection. 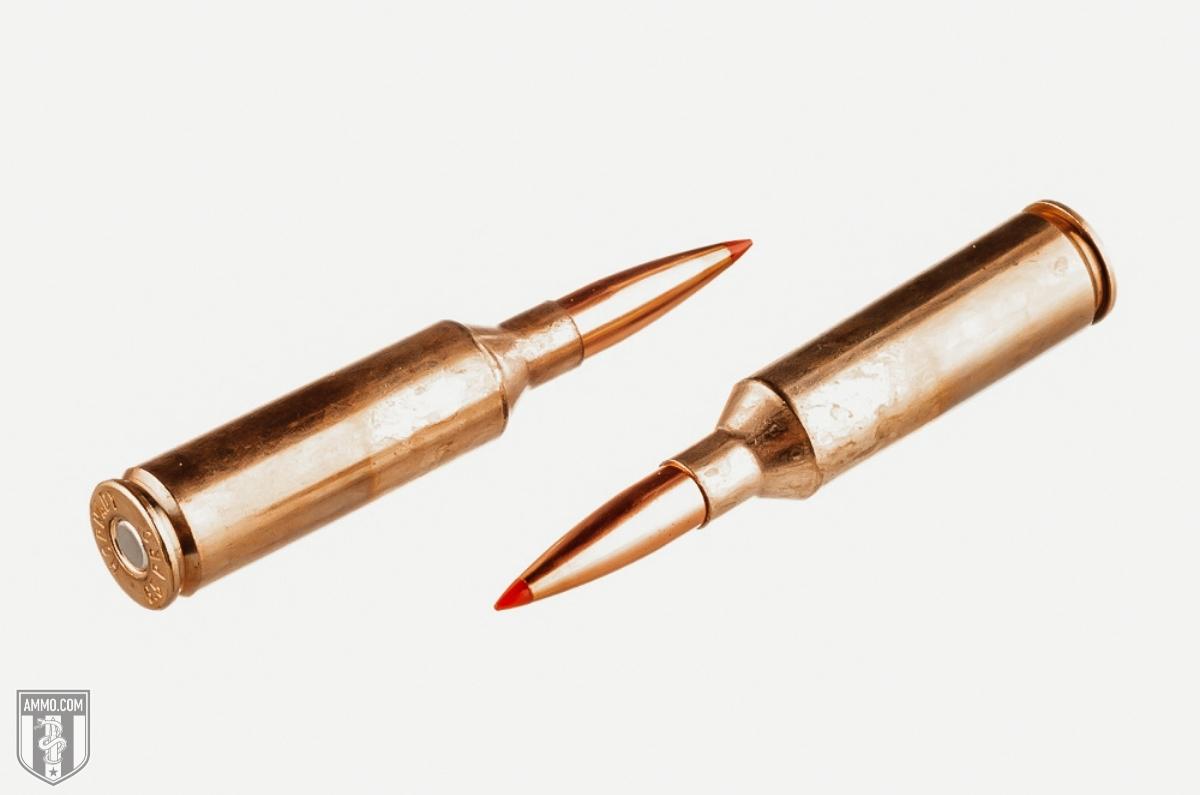 However, as the 26 Nosler has higher muzzle velocity, it will typically have a higher BC and resist wind drift more effectively than the 6.5 PRC.

Many North American shooters are coming to understand that 6.5mm projectiles shoot above their weight class. Compared to other heavy hitting cartridges like the 7mm Remington Magnum, 300 Winchester Magnum, and 300 WSM, the 6.5’s simply perform better. For example, a 7mm Rem Mag 162 gr SST has a BC of 0.550, while the 200 gr ELD-X for 300 WSM has a BC of 0.597.

The 0.264” caliber bullets are just in that sweet spot for BC and are extremely effective a resisting wind drift. Assuming a 10 mph cross wind, the 6.5 PRC will be pushed approximately 61” off course at 1,000 yards compared to 43” of wind drift for the 26 Nosler.

Sectional density is of particular importance to big game hunters who need exceptional penetration to punch through thick hide and bone to ensure a clean kill.

As both rifle cartridges fire the same bullets, the 26 Nosler and 6.5 PRC have identical SD values around 0.25 to 0.30 depending on bullet weight and design. In comparison, that means both cartridges are on par with larger cartridges like the 300 Weatherby Magnum in terms of penetration. 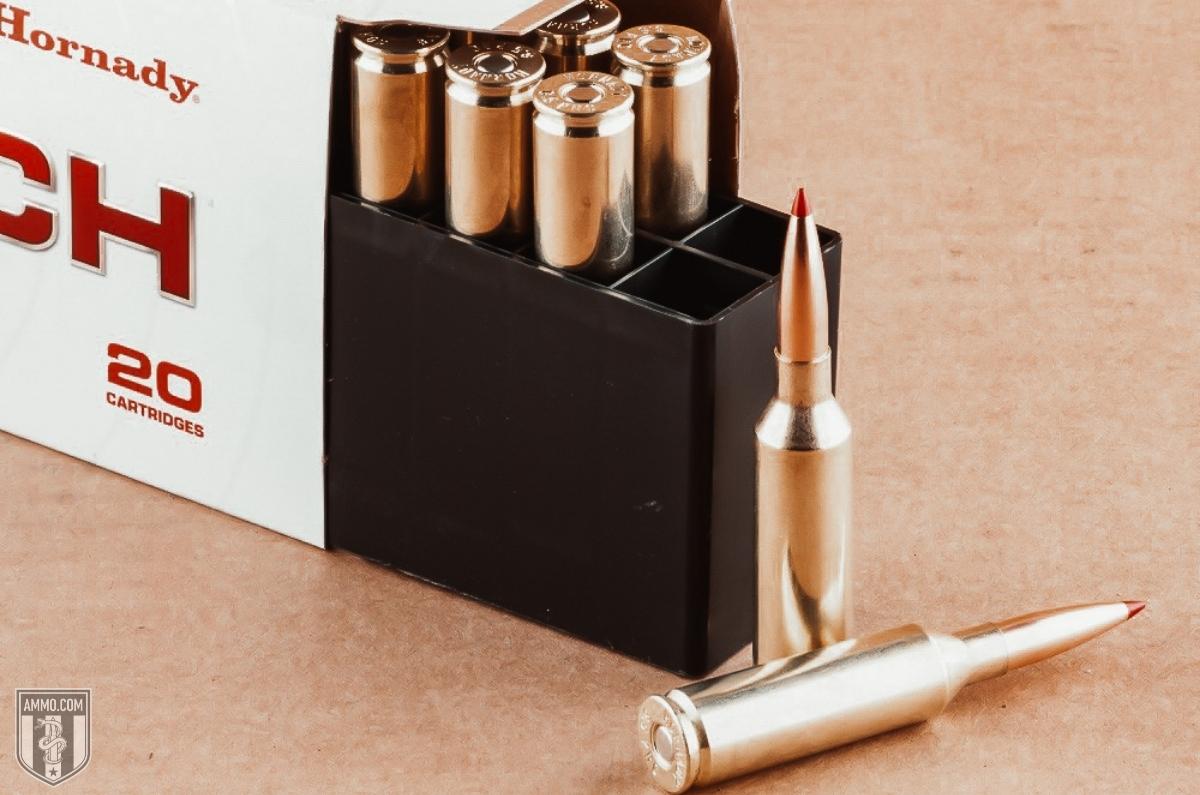 Despite the prevalence of 30-caliber cartridges, the 6.5mm has been a potent hunting cartridge for quite some time. The 6.5x55mm Swedish, 260 Remington, and more recently 6.5 Grendel have been taking game animals in the backcountry for years.

With lovefest surrounding the long range capabilities of the 6.5 Creedmoor, many hunters attempted to force the cartridge into a hunting role.

This is where the 26 Nosler and 6.5 PRC really shines as their higher muzzle velocities allows them to be effective against big game at longer ranges.

The general rule for big game hunting is that a bullet needs 1,500 ft-lbs of energy to effectively harvest an elk. Considering this criterion, the 26 Nosler effective range for elk is around 850 yards compared to 550 for 6.5 PRC.

Both cartridges are more than enough for deer, and at shorter ranges under 200 yards some hunters might consider them too much for whitetail.

Neither the Nosler nor PRC are appropriate for varmint hunting as they are far too powerful for such a small critter. Varmint hunting is best left to the 223 Remington or 22-250. 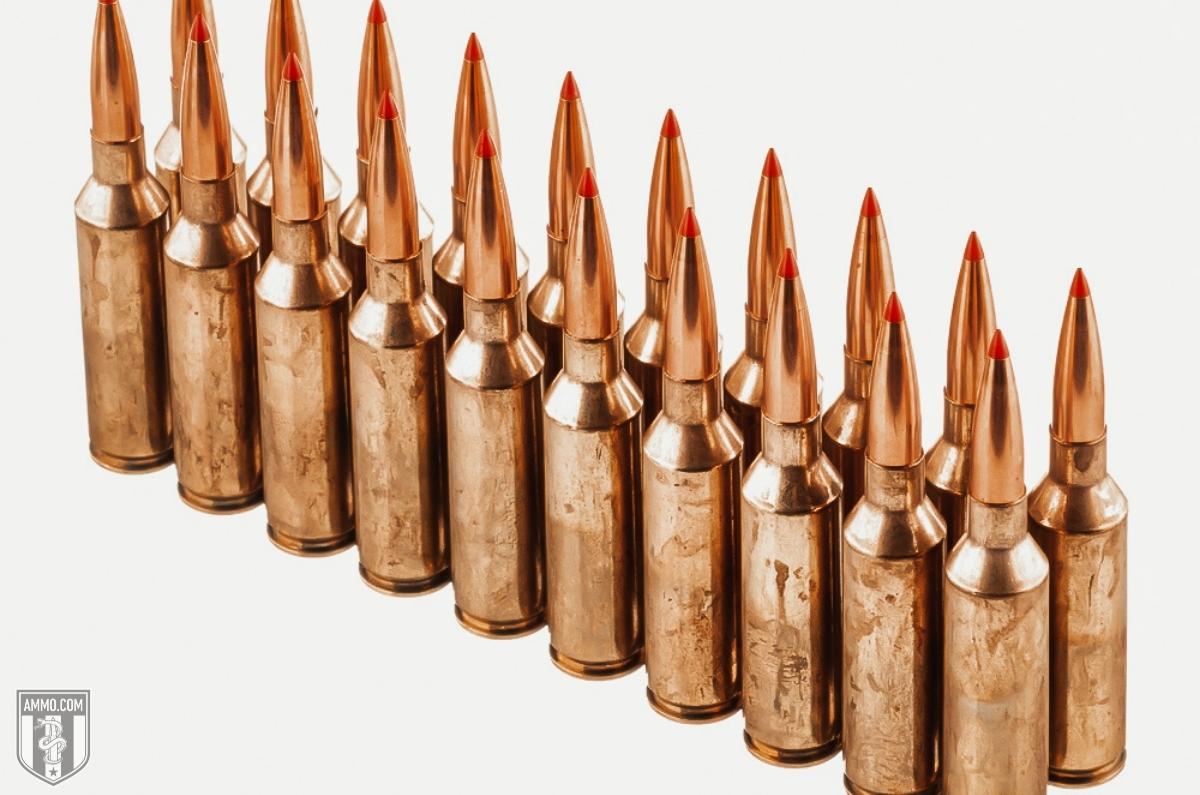 As a hunting cartridge, the 26 Nosler really gets the job done, as it offers a flat trajectory and enhanced long range capabilities. Hunters should be less concerned about barrel life, as it is unlikely they will burn through more than a few boxes of ammo per season in their hunting rifle.

Although 26 Nosler ballistics make it a superior hunting cartridge, the 6.5 PRC should not be dismissed as it is extremely effective on large game within its range. Furthermore, the PRC has considerably less recoil than the Nosler, thus making it less likely for a shooter to flinch at the moment of truth. It’s also important to remember that the 6.5 PRC fits into a short action, meaning a PRC rifle will be slightly lighter than its Nosler counterpart. This can make a difference when hiking through thick backcountry brush or on long stalks.

For long-range hunting, the Nosler round makes a bit more sense with its flatter trajectory. However, for shorter range shots under 500 yards, the PRC will get the job done so long as your shot placement is on point.

In terms of ammo and rifle availability, the 6.5 PRC is the clear winner.

If there’s one thing that Hornady is exceptional at, it’s marketing their new cartridges to wide audience. Just like the 300 PRC and 6.5 Creedmoor, Hornady has done an admirable job making the 6.5 PRC an appealing cartridge to multiple ammo and rifle manufacturers. 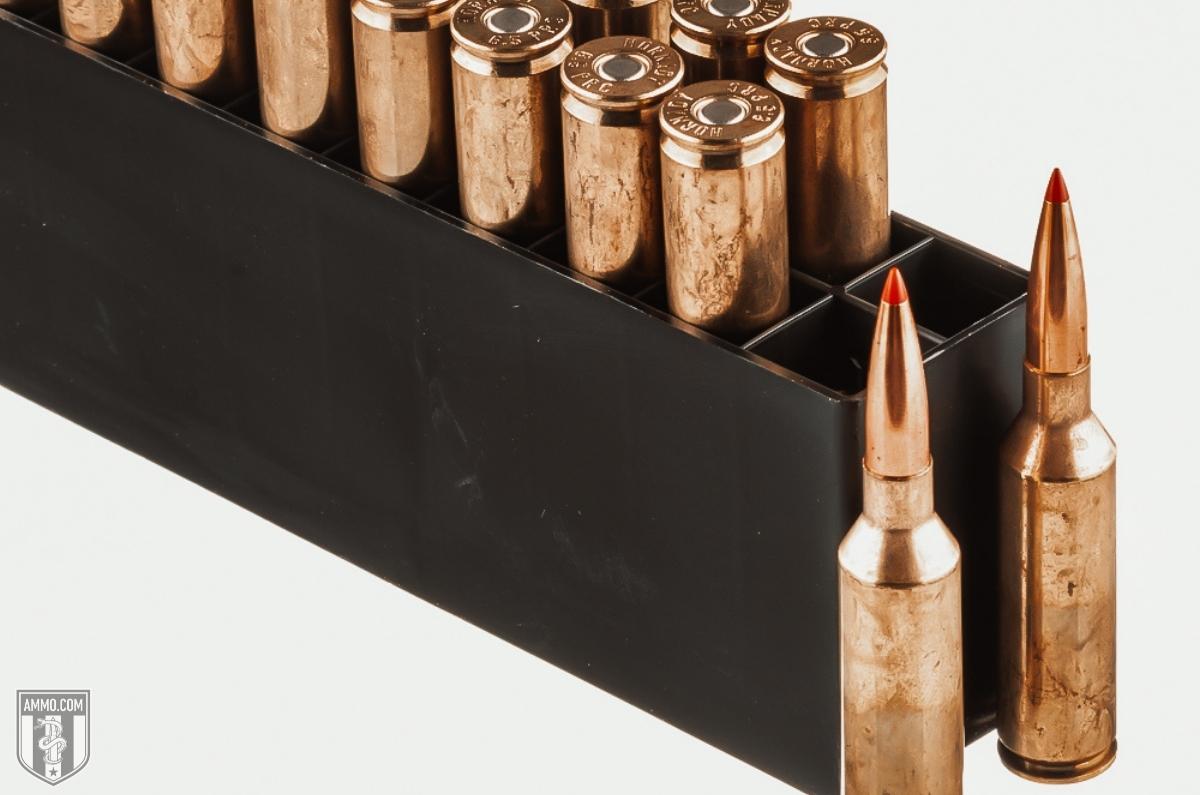 PRC hunting ammo can be had from multiple manufactures like Winchester, Federal, Browning, Norma, and Hornady itself.  At the time of writing, 6.5 PRC factory ammo typically costs between $2-4/round.

In comparison, the only manufacturer who loads 26 Nosler is Nosler itself. Furthermore, Nosler ammo is not cheap, typically running close to or above $5/round.

Lack of availability also hurts the 26 Nosler in terms of rifles, as Christensen, Nosler, and the Hell’s Canyon Speed Browning X-Bolt are your only options as of June 2022. On the other hand, 6.5 PRC rifles are considerably easier to locate as Savage, Winchester, Christensen, Bergara, and Sako make rifles for the cartridge.

Handloading is one way many shooters use to reduce their overall cost per round and customize their ammo to maximize accuracy.

With the increase in popularity of the 6.5mm bullet, there are a lot of options for a handloader to choose from. All the major manufacturers like Berger, Hornady, Nosler, and Barnes make incredible hunting and long range shooting options in 6.5mm.

For powder selection, Hodgdon Retumbo and H1000 are popular choices for both calibers. 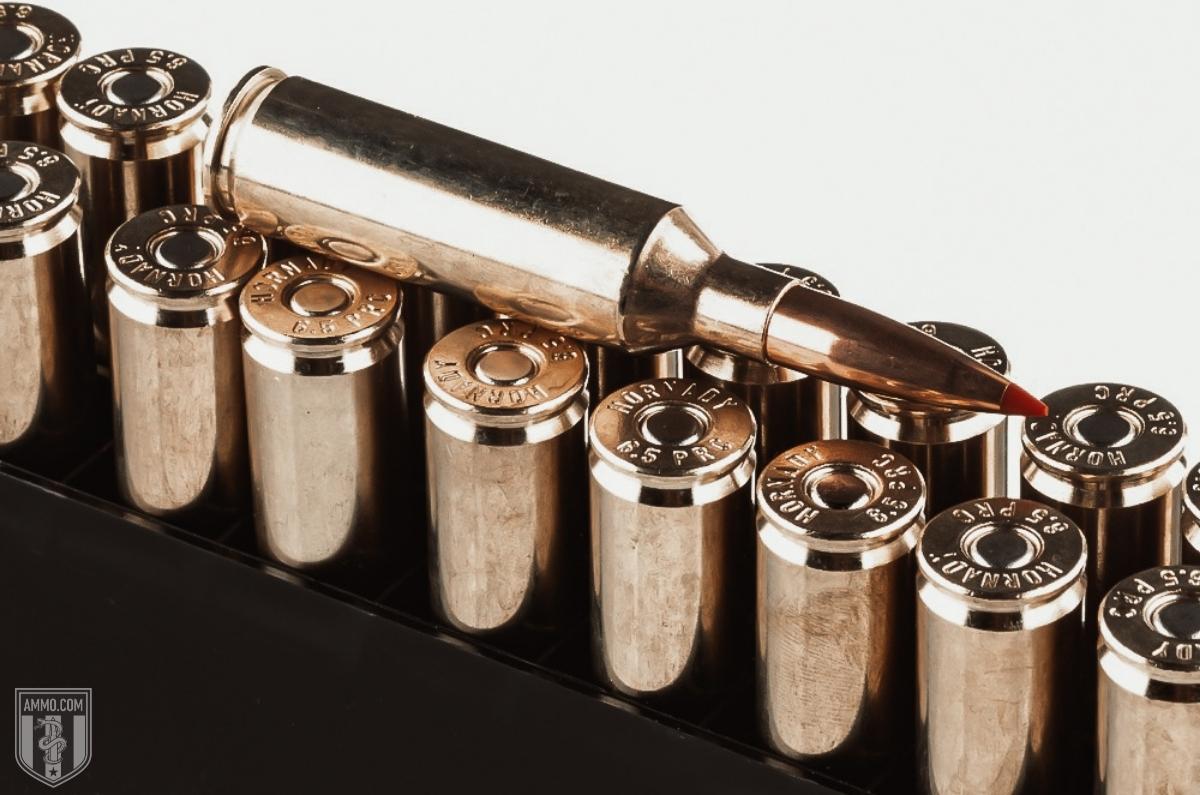 In terms of brass, the best practice is to save your brass from factory loads as most shooters who choose these calibers hold onto their spent cartridges. There is not a large secondary market for once-fired 26 Nosler and 6.5 PRC brass like you see for 6.5 Creedmoor or 223 Rem.

The choice between 26 Nosler vs 6.5 PRC comes down to understanding what your shooting needs are.

The 26 Nosler is an excellent choice for large game and precision rifle shooting. It has the flatter trajectory and offers the utmost levels of precision and kinetic energy at extremely long ranges. However, the Noser does suffer from lack of ammo availability, lower barrel life, and increased recoil.

The 6.5 PRC is also extremely effective against large game with better barrel life and considerably less recoil than the 26 Nosler. However, as the PRC has less case capacity, it has a slightly shorter effective range when compared to the Nosler for big game animals like elk and moose.

Choosing between these two rifle cartridges mostly comes down to personal preference as they will both get the job done so long as your shot placement is accurate. Some shooters will prefer the lower recoil of the PRC, while some like the added power the 26 Nosler has to offer for longer shots.