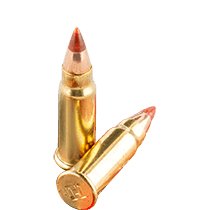 Live Inventory
Introduced in 2004, the .17 Hornady Mach 2 Rimfire cartridge is a great choice for varmint hunting due to its accuracy and flat shooting. And with virtually no perceptible recoil, .17 HM2 easily outperforms .22 LR ammunition. Learn More

In 2004, the Hornady Manufacturing Company introduced the .17 Hornady Mach 2 (.17 HM2) using a .22 LR case that had been extended and necked down. This cartridge should not be mistaken for the Hornady .17 HMR, which is based on the case of a .22 Magnum. The .17 HM2 is designed to take varmint at 100 yards or more, and performs the task admirably. It develops a similar amount of energy as the .22 LR in foot pounds, but it travels at a higher velocity – resulting in a flatter bullet trajectory.

The Genesis of the 17 HM2 Ammo Cartridge

Hornady is an ammunition manufacturer deeply invested in the development of new and ever more powerful and efficient rounds. The HM2 is no exception to this rule. They have likewise worked hand in hand with firearms manufacturers like Sturm, Ruger & Co. to develop new cartridges for their rounds, including the .204 Ruger, the .375 Ruger and the .480 Ruger. They also released a “Zombie Max” bullet designed in response to a growing interest in zombie shooting in the United States.

We can’t talk about the HM2 without talking about the HMR, as its success is what led to the investment of the .17 HM2. The HMR was a response by Hornady to wildcatters who were looking for a solid replacement for the 5mm Remington Rimfire Magnum, which was the fastest rimfire round on the market. Popular among a specific niche, it was only available from 1970 to 1974. This experience proved to Hornady that there was a market for performance-built rounds custom designed for niche shooting markets.

Just as the HMR caught on with a number of weapons manufacturers, so has the HM2 – which can be found fired out of revolvers and virtually every kind of rifle. Conversion kits are popular for people who own .22 Long Rifle weapons and want the benefits of an HM2. What’s more, weapons chambered for the .17 HM2 can also accommodate .17 PMC/Aguila and .17 HMR rounds, making these weapons extremely versatile. You might also find that .17 rimfire wildcat rounds can also fire through these weapons, depending on the specific cartridge in question.

The “Mach 2” is more of a catchy advertising slogan than anything else. HM2 rounds are fast, but they’re not “Mach 2” fast. The velocity coming out of the barrel tends to be around 2,100 feet per second, about twice what you can expect from a .22 Long Rifle round. If you want to change over a .22 LR-chambered firearm, all you really need to do is change the barrel.

You just might be able to get the Mach 2 to travel at the speed from where it gets its name. Much of how close you get to this speed depends on what you’re firing out of, how skilled you are, and where you are in relationship to sea level. In fact, if you were to shoot it from the top of Mount Everest, you would likely get it to leave the muzzle at over Mach 2.

Conversion of semi-automatic firearms is more difficult, which is due to the greater pressure in the barrel. There are conversion kits available, but they include replacement of the bolt, the bolt handle, or both with a heavier piece. This helps to compensate for the pressure difference, making it a safe form of conversion.

American Rifle featured the round on the cover, touting it as “The Little Cartridge That Could.” This is because it’s a small, but incredibly powerful and versatile round. While it never really caught on in the same way that the .22 LR round did, it offers a lot in terms of performance for a competitive price.

The original HMR was a necked-down .22 Magnum. Similarly, the HM2 is a necked-down .22 Long Rifle case. In fact, the .22 LR and HM2 are so similar that they often compete for customers. Once the HM2 came out, nearly every ammunition manufacturer in the .22 rimfire business started making HM2 rounds as well. So it’s worth talking a bit about the differences between the two.

The differences are small, but significant. It’s also worth noting that, as the most popular round in the world, .22 Long Rifle ammunition tends to be much easier to get and often times less expensive than HM2. There are also a number of different types of .22 LR rounds. At the end of the day, the .22 LR might have the edge when it comes to training and plinking, while the HM2 succeeds when it comes to actually shooting small game and varmints.

Today, manufacturers still chamber rifles for the .17 HM2 – including Savage, Browning and others. The most common actions are semi-automatic and bolt action, but there are also some quality examples of single shot rifles. The .17 HM2 has also been chambered for revolvers and semi-automatic pistols, and Ruger 10/22 owners can even fire the .17 HM2 from their rifles with a special conversion kit.

Hornady and CCI currently make .17 HM2 ammunition available with bullets weighing 17 grains, while Hornady also sells a bullet weighing 15.5 grains. Both of these bullets exit the muzzle at more than 2,000 feet per second and carry 150 foot pounds of energy – which is why shooters have reported successful shots with the .17 HM2 on small vermin up to 150 yards.

Varmint hunters today choose the .17 HM2 for the flat trajectory, accuracy, and light recoil – all factors that combine to help it stand above other rimfire cartridges.

What is the difference between the 17 HMR and 17 HM2 ammo?

When comparing rimfire cartridges, the .17 HMR and .17 HM2 have some differences. Although they were both created by Hornady and feature the same .17 caliber projectile, the Mach 2, which is based on the .22 LR while the HMR is based on the 5mm Remington Mag, has a lower velocity and less muzzle energy than the HMR.

Why is 17 HM2 ammo difficult to find?

The .17 HM2 cartridge can be difficult to find. This is due to multiple factors, including that although popular for a rimfire cartridge, there are not a lot of shooters opting for the .17 caliber. In addition, Hornady and CCI are the only manufacturers who make the round.

Both Hornady and CCI manufacture the .17 HM2.

What is the effective range of the 17 HM2?

The .17 HM2 has an effective range of about 150 yards for taking small game and varmint. Although the rimfire round has a relatively high velocity, the muzzle energy remains under 200 foot pound force.

Tim F.Great job!! Got it fast with no issues.

Jody S.Great job in a stressful time. Thanks for your quick service and for not price gouging! Will definitely buy from you again.

“No kingdom can be secured otherwise than by arming the people. The possession of arms is the distinction between a freeman and a slave. He, who has nothing, and who himself belongs to another, must be defended by him, whose property he is, and needs no arms. But he, who thinks he is his own master, and has what he can call his own, ought to have arms to defend himself, and what he possesses; else he lives precariously, and at discretion.”James Burgh