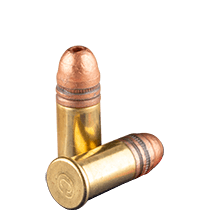 Live Inventory
Initially introduced in the 19th century as a black powder cartridge, the .22 Short is a popular choice for pest control and plinking. And with its almost imperceptible recoil, .22 Short ammo is a great way to introduce a new shooter to the sport. Learn More
per page

Introduced as the first American metallic cartridge ever produced in 1857, the .22 Short was an entirely self-contained cartridge that was moisture resistant and more quickly reloaded than other firearms of the era. It was a rimfire cartridge, meaning that the priming compound was applied inside the rim of the cartridge, which ignited the powder charge held in the case.

The Power of 22 Short Ammo

There’s no two ways about it. The .22 Short is a small round. But what it lacks in size, it makes up for in power. These days it’s mostly used as a relatively quiet round for people to practice with at the range. In the days when America was still a free country, it was a popular round for gallery shooting at fairs and carnivals. In fact, many rifle manufacturers made 22 Short chambered rifles specifically for this purpose. Any rounds manufactured specifically for fairs and carnivals were designed to disintegrate on impact to make it so they wouldn’t ricochet or penetrate the backstop.

Until the 2004 Olympiad, the .22 Short was the round of choice in the 25-meter rapid fire pistol event, thanks to its very low recoil and high accuracy. They were also a preferred round in the modern pentathlon event until the changeover to air pistols.

The History of the 22 Short

Smith & Wesson's first revolver was chambered for the .22 Short, which was designed to be used as a self-defense cartridge – a popular use for soldiers in the Civil War. The .22 Short remained popular after the war and was chambered in a growing variety of rifles and small pistols. Many youngsters of the late 19th century and early to mid 20th century received .22 Short rifles as their first gun. While it was eventually replaced by the more popular .22 LR, there are still dedicated fans who have kept the place of this cartridge secure in the world of shooting.

The original .22 Shorts carried black powder, and the old Smith & Wesson Model 1 revolvers that shot them often suffered from pitting. In the smokeless powder era, the 29 grain (gr) bullet provided some serious speed and power for this little round. Make it into a hollow point and you have a seriously deadly and accurate round for shooting small game at short range. It’s relatively quiet, making it an excellent choice for guys sitting around their backyard plinking on a Saturday night. This likewise means it’s an effective round for hunters who want to maintain a bit of stealth.

The roots of the .22 Short lie in the origin of rimfire technology. This dates back to the mid-1800s when the Frenchman Louis Flobert began tinkering with lead balls in percussion caps. He didn’t ultimately come up with a lot on his own, but he did start the rimfire revolution, which bore fruit with the .22 Short, the first metallic cartridge produced in the United States. The .22 Short later became the basis for the not creatively named 22 Long, .22 Extra Long and .22 Long Rifle rounds.

The .22 Short saw a great deal of use in shooting galleries, which were widespread from the late 19th century until the mid 20th century. With a very mild report, no recoil, and sufficient accuracy, the .22 Short had a reputation for being able to take small game and control pests.

Once upon a time, the firearm market had neither Glock nor AR. What it did have, however, was the .22 rimfire variants, perhaps most prominently the .22 Short. It’s not a large round, but it’s versatile and powerful, which is probably why it’s been around for 160 years.

The round boasts a stunning array of firearms available for use. Hundreds of weapons have been chambered for .22 Shorts over the last century, with dozens upon dozens available on the market today. The firearms chambered for .22 Shorts run the gamut from AR platforms all the way to old-fashioned lever action rifles to revolvers and autoloaders. Virtually every type of weapon imaginable has been chambered for a .22 Short at one point or another. A number of popular conversion kits exist specifically to chamber AR platforms for .22s. As the cost of .22 rounds tends to be a lot less than .223, that means a lot more shooting for a lot less money. No matter what you want to do with a firearm, you can do it with a .22.

Its lead round nose bullet weighs 29 gr and reaches a velocity of 1,045 feet per second, resulting in 70 foot pounds of muzzle energy. Although initially developed more than 100 years ago as a self-defense cartridge, few modern self-defense weapons are chambered for the .22 Short.

Several manufacturers have produced rifles for the .22 Short – including Marlin, Winchester and Remington. The rifles were most commonly made as pump and lever action guns, with single-shot rifles a close third. Browning produced a semi-automatic rifle for the .22 Short, and Winchester accepted special orders for bolt action rifles that fired the .22 Short.

Some of the most common uses for the .22 Short caliber round include:

One problem with the .22 Short? It’s prone to shortages, as are many related .22 rounds. Curiously, it’s the versatility and low cost of the .22 Short that led to the shortages. Because it allows people to have a low-cost day down at the range, it’s common for there to be a run on .22 Short rounds wherever they pop up. Many of the factories manufacturing these rounds have a limited smelting capacity, so if you’re looking for an inexpensive, highly versatile and effective round, it’s not a bad idea to snap up as much of this as you can when you get the opportunity.

A great cartridge, the .22 Short shoots accurately and quietly, and has a nearly imperceptible recoil, especially when firing subsonic rounds. This makes it a good cartridge for first-time shooters, and also a fun plinker.

The .22 Short was the U.S.’s first metal-encased ammunition and therefore hundreds of firearms have been chambered for it. From pocket pistols to AR-styles and everything in between, there are many, many guns that shoot .22 Short. The caliber can also be fired out of some .22 Long and .22 LR chambered guns, although the cartridge must be loaded directly into the chamber.

How fast does the .22 Short travel?

A 27 to 29 grain round nose bullet can reach muzzle velocities between 727 and 830 feet per second. Speciality rounds may reach over 1,000 fps.

What is the effective range of the .22 Short?

The range of the .22 Short is highly dependant upon the type of firearm used. In a .22 Short rifle, you can expect an effective range of about 35-50 yards, depending on conditions, while a pocket pistol is only effective for about 15 yards.

How accurate is the .22 Short?

Like many of the rimfire cartridges, the .22 Short is an accurate, but short-ranged caliber.

When comparing the .22 Short and the .22 Long Rifle (LR), the most notable difference is the size. The Short’s cartridge measures only 0.7 inch, while the .22 LR is a standard one inch. Although both rimfires, the LR also has a heavier bullet (40 gr compared to 27-29 gr) and more powder, giving it a higher velocity and more muzzle energy.

When was the .22 Short invented?

The .22 Short was the first U.S. metal-based cartridge, as well as the first rimfire. Introduced in 1857, it’s the parent case of all the .22s, including the .22 Long and .22 LR. The bullet was created for Smith & Wesson’s first revolver, the Model 1.

The .22 Short can be deadly, but not always. The rimfire round has a low muzzle energy, with round nose bullets reaching foot pound forces between 44 and 87. This is enough to humanely hunt small game at close range or dispose of varmints. When it comes to self defense, the .22 Short is not recommended, but with proper bullet placement, fatal shots are possible.

Jeremy F.Very happy with the entire order and will for sure be a return customer!

Brad L.Enjoyed my experience with your company. Shopping was easy and quick. Received my order in a timely manner and look forward to placing more orders. Thank you.

Ralph H.Got my ammo in record time. Very happy with your service.

“A Winchester rifle should have a place of honor in every black home, and it should be used for that protection which the law refuses to give.”Ida B. Wells