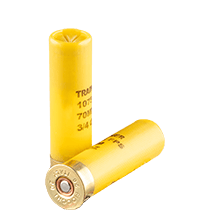 Live Inventory
The choice of many hunters for upland game and deer, the 20 gauge offers a sought-after light recoil. This versatile gauge has also been making headway into the self-defense market with new specialty ammunition designed for personal protection. Learn More
per page

A special gauge to many shotgunners, 20 gauge ammo is what many used to take their very first shots. And it remains the choice today for many hunters and competition shooters.

The smooth bore cartridge is significantly smaller than the 12 gauge (.615 vs .729), which means it has less recoil, making it the perfect entry-level shotgun shell. However, there’s a lot more going on with this powerful little round than just a shotgun for the kiddies. While the much heavier duty 12 gauge is the gold standard for home defense shotguns, you would be remiss to overlook the benefits of 20 gauge shells for the same use. In fact, Mossberg makes a 20ga ammo shotgun specifically designed for home defense.

A shotgun is primarily purchased for close-range home defense, and you might be surprised to learn that 20 gauge ammo is just about as effective as the 12 gauge, particularly for people who have difficulty managing the recoil of 20 gauge specialty ammo. Whether you’re looking for a weapon for a young person, a woman, a diminutive gentleman, or just someone with shoulder issues, 20 gauge shotgun shells can step in and get the job done when the recoil of a 12 gauge is too much. This is something to seriously consider – it’s far better to defend oneself with a weapon one can fire than with a weapon one cannot.

The 20 gauge cartridge can handle tasks other than self defense for smaller folks. It’s also a great cartridge for bird hunting. This is because the lower power of the weapon leaves more meat intact. So even if you’re a big, burly man, don’t be afraid of using this more diminutive weapon when hunting game, especially game birds. Grouse, turkey, and quail are appropriate quarry for a 20 gauge shell. However, don’t think for a second that deer aren’t on your radar. Because the 20 gauge is capable of loading slugs, you can hunt deer with them or even just ramp up the stopping power of your self defense.

The History of Speciality Shotgun Ammo

As you probably already know, early firearms fired balls, not modern cartridges. The earliest guns were likewise capable of firing something known as “shot,” which isn’t terribly different from the shotgun shells you use today. It was basically anything hard enough to do damage that you could shove down the barrel of a firearm.

Initially, shotgun ammo was used primarily by bird hunters and, to a lesser extent, police and guards. It wasn’t until World War I that they found a lot of use in the military as an effective weapon in trench warfare. The Second World War saw the shotgun used extensively in close-quarters jungle fighting in the Pacific Theater. Today, they are a specialty item in the military, primarily used by hunters and skeet shooters, as well as police and those seeking protection.

20 gauge began life as a muzzleloader with a 0.615-inch diameter bore. Just as the 10, 12 and 16 gauges evolved into being packaged in paper cartridges, and eventually in today's familiar plastic hulls, so did the 20 gauge (the only difference being that 20 gauge hulls are colored yellow). The choice of yellow as the color for 20 gauge shells was intentional, as it draws the attention of shooters – who might have different shotguns in different gauges – to make sure they don't accidentally load a 20 gauge shell in the wrong gun, which would ruin their shotgun or possibly harm the shooter.

Commonly employed to hunt birds and small game, as well as that ever-elusive clay pigeon, hunters and competitors indicate that the number-one reason for using the 20 gauge (as opposed to the more powerful 12 and 16 gauges) is recoil. The recoil of the 20 gauge is described by many shooters as about 50 percent of a 12 gauge when fired out of a shotgun of the same type. The 20 gauge enjoys another advantage in that the gun itself can be lighter than the large shotguns, without worrying about an increase in recoil. In fact, 20 gauge shotguns can be lighter than an equivalent 12 gauge shotgun by one, two or even several pounds.

Some shooters argue that the 20 gauge is a less effective cartridge due to the lighter payload and smaller charge. Counter arguments can be made by presenting the stories of many successful hunts being made with 20 gauge shotguns on animals as diverse as dove and deer. Consider the 20 gauge slug as a perfect example of how much power is contained in this cartridge. In terms of ballistics, the 5/8-ounce slug of the 20 gauge exiting the muzzle with a velocity of about 1,500 feet per second is essentially the same as the .454 Casull.

It’s worth looking at some of the differences between the world’s most popular shotgun shell, the 12 gauge and the more slight 20 gauge. Here’s how the 12 gauge vs 20 gauge discussion breaks down:

So what’s the final verdict? A 20 gauge round is going to deliver double the energy of the .44 Remington Magnum, so you don’t have to worry about a lack of power. The choice between 20 gauge and 12 gauge ultimately boils down to what you feel most comfortable shooting. Firearms instructors refer to the phenomenon of “flinching” or “jerking” as shooters inappropriately brace themselves prior to recoil. This makes for less accurate shooting, so power is not the only consideration when choosing a shotgun, especially for home defense.

Shooters today will find a wide variety of affordable 20 gauge ammunition for their shotguns. Shot sizes available range from large buckshot on one end of the scale to diminutive #8 and #9 on the other end. Federal and Winchester recognize the market potential and value of the 20 gauge for personal protection at home, and are including it in their product lines for self defense. The 20 gauge is a great choice for applications as varied as bird hunting in the field to protecting your house.

The 12 gauge is the most popular shotgun in the United States and 12 gauge ammo is more common than the smaller 20 gauge. While the larger round may be more popular overall, the 20 gauge is used by many and is often the first shotgun many people shot.

What is the difference between 12 gauge and 20 gauge ammo?

The 12 gauge round is significantly larger than the 20 gauge. It also has a wider spread, higher velocity, and more energy. In addition, the 12 gauge has a longer range. But in many situations, from home defense to bird hunting, the 20 gauge is more than sufficient. It also has less recoil and is easier to handle, especially for novice shooters and those with small frames. Women, youth shooters, and seniors often prefer it.

Which shotgun ammo has the least recoil, 20 gauge vs 410?

In most cases, there is less recoil when shooting .410 ammo than when shooting 20 gauge ammo. The .410 is a smaller cartridge, has less velocity and less energy. But what it lacks in power, the .410 makes up for in manageability, as the round has little recoil and is easy for most shooters to handle.

The #3 on 20 gauge ammo refers to the size of the shot (or projectiles) in the cartridge. Normally found as #3 steel shot, each projectile has a diameter of .14 inch and 154 pellets fit in a 10 ounce round. This shot size is typically used for large birds like geese, but it also bridges between birdshot and buckshot and, in some places, can be used in short-range deer hunting.

What is the best 20 gauge self defense ammo?

Almost all 20 gauge ammo is good for self defense and in many short distance situations, the 20 gauge can be just as effective for home defense as 12 gauge ammo. That being said, many ammunition manufacturers produce specialty defensive rounds including Federal, Hornady, and Remington.

What 20 gauge ammo should I use for clay targets?

When opting for 20 gauge ammo for shooting clay targets, check with your shooting club. Many clubs require shot sizes of #7 ½ or smaller. In some cases, #8 shot may be a better option, especially if firing from a close range. Most clay target shooters opt for a 2 ¾ inch shell over the three inch. Because you’re not worried about stopping power, the extra power is unnecessary and even restricted at some clubs. Many ammunition manufacturers makes specialty target rounds including Winchester, Remington, and Federal.

What is the best 20 gauge ammo for home defense?

Just about any 20 gauge ammo is good for home defense. Although many argue that the 12 gauge is necessary for defensive situations, the smaller cartridge is often just as effective. While you can opt for any configuration, many ammunition manufacturers produce specialty defensive rounds including Federal, Hornady, and Remington.