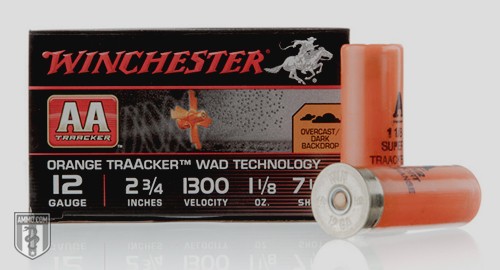 #7.5 lead shot is one of the most easily found shot sizes on the market and is made by a variety of manufacturers including NobelSport and Federal, for several different applications. Although it's typically sold to dove, quail and pheasant hunters for its excellent ability to take down fast-moving birds – squirrels, rabbits and other small game can easily be hunted with this shot size. With a high pellet count leading to a dense pattern, #7.5 lead shot will give you great stopping power with an optimal range of 35 to 50 yards.

Lead shot is very regulated in certain states, parks and recreational areas. And based on the area, it could be a complete ban or a ban on certain weights of lead ammunition. If it’s a weight ban, using a smaller shell might allow you to hunt without having to switch to steel.

Commonly called “dove shot," this ammo is mostly used for small birds and animals due to its light weight. Doves, grouse, pheasants, ducks (with decoys), squirrels and rabbits are perfect for 7 1/2 shot because it won’t destroy the meat or ruin a trophy. Some hunters even say that inside of 35 yards, this shot size is great for turkey as well, while other hunters speak of its effectiveness on crows. Many hunters find this about as small as they want to go for squirrel and rabbits, as the potential for a quick, clean kill diminishes with smaller shot.

Most shooters agree that lead shot travels faster, farther and penetrates better than steel shot – but it’s all about your personal preference, combined with the local regulations where you’re planning to shoot. Some think that if you’re used to using a certain size lead shot and switch to steel, you should use a shot that’s about two sizes larger. So, if you’re using lead #7.5, #6 steel could be a good substitute. This is really a matter of opinion, so try the normal steel option before going larger.

#7.5 shot, #8 shot and similar sizes are perfect for shooting clays and stationary targets at a range or on your own property. The range combined with the spacing of the pellets guarantees a high hit probability at a fair distance – so even a small target moving at high speed can be hit most of the time. It's also ideal if you're not using dogs, as it's powerful enough to kill rather than wound.

Whether you are shooting birds, clays or squirrel, 7.5 lead shot is a great size that will fit most of your shotgunning needs.