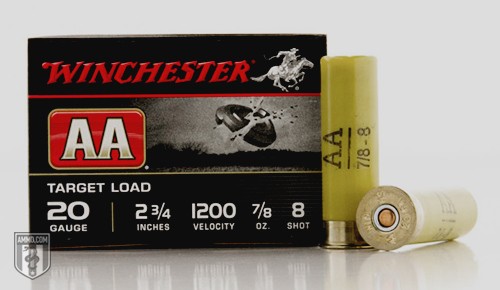 Used in everything from casual shooting to Olympic-level shooting events, #8 shot is typically popular for trap, skeet and sporting clays – as it offers good range and a dense pattern, but still relies heavily on user skill to accurately break the targets. #8 shot is also a decent size for varmint control, but you should stick within 30 yards to make sure you actually hit it.

This type of ammo has more power than the same load with steel pellets, and is something to consider if you prefer steel and are shooting on your property. Pros recommend using a steel shot up to two sizes larger as a substitute, but you will lose a few pellets. Find #8 shotgun shells easily in 12, 16 and 20 gauge.

Number 8 shot isn’t considered a hunting round unless you’re shooting doves, pigeons or maybe quail. You’re going to get quite a nice spread at about 30 yards, allowing you to take smaller birds down easily as long as you stay in range. However, most hunters won't chance losing the bird due to lack of penetration, and many hunters won't go afield with anything smaller than #7.5 shot. Larger birds aren’t going to be an option with this shot, because they are simply too well padded by feathers and their skin is too thick.

Small critters like squirrels or rabbit can be hunted with #8, but you’re going to have to be extremely close – making them difficult to eat. With over 410 pellets in a one-ounce load, care must be taken when preparing the game to cook. As with turkey and game bird hunting, try to have your shot mostly in the head and neck region for mammals. Many hunters will stick to a #6 or larger shot when hunting all but the smallest game.

This is where your #8 and similar sizes are going to really shine. You’ll need to pattern your shotgun first, so you know exactly what your limitations and effective ranges are. Once that’s done, you’ll find this size to be very enjoyable. The #8 can successfully hit and break all types of skeet and clays, even at pretty high speed. If you have a little more experience, you can drop down to a 7.5, depending on what you’re shooting and who you’re shooting. Keep in mind that competitive shooting will have various restrictions on pellet material and allowed sizes of shot.

This particular shot works for small critters and birds, and is quite effective on snakes. But while stunningly effective at indoor distances on small vermin, the idea of shooting a shotgun in a building with a concrete or hard-packed dirt floor doesn't seem like the best idea. The #8 can be pretty effective if you’re covering a large area of land, like a ranch or farm, but keep in mind that you’ll have a much shorter range than if you were using a #4 shot or something similar.