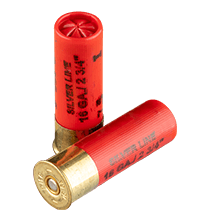 Live Inventory
The 16 gauge cartridge is an excellent compromise between the heavier weighted and recoiling shotguns in 12 gauge and the lighter 20 gauge with less recoil. It carries similar payloads as 12 gauge shells and is a respected upland game gauge. Learn More
per page

Known among many shooters as the "Sweet Sixteen," the 16 gauge shotgun cartridge has a tribe of dedicated followers who appreciate its versatility. The recoil is manageable and the payload is reasonable – two features that contribute to the appeal of the 16 gauge in comparison to 12 gauge and 20 gauge shotguns. And while people say the gauge is dying, they’ve been saying that for the last 50 years – and it ain’t dead yet.

Indeed, this has been called “the most logical of all gauges” by Gun Digest. The bore is almost exactly two-thirds of an inch. The lead balls inside weigh precisely an ounce. And the shot column’s dimensions border on the perfect pattern. There was a time when the gauge was advertised as “Carries like a 20, shoots like a 12.” Adherents of this gauge would agree that it provides the best of both worlds.

Perhaps this is why the gauge was known as “the gentleman’s gauge” throughout the early years of the 20th century. Compare with the more down-market 12 gauge, which was the province of farmers and deer hunters. On the other hand, the 16 gauge shotgun shell was considered a sleek round best suited for shooting quail and grouse.

There’s more than just image in play here when it comes to the 16 as the gentleman’s gauge. There is also a rich history and lineage. 16 bore was one of the preferred rounds from the black powder and solid ball era – the favorite round of the fowler as well as the big game hunter of the time. You can still purchase flintlock 16 gauge shotguns on the antique market, provided that you’re made of money.

The Decline of the 16 Ga Shotgun Shell

The move away from the 16 gauge to the 12 and the 20 is a purely American phenomenon. In Europe, the round remains as popular as it ever was. But in Britain, the 16 never really found much sway and the 12 gauge is the preferred round. However, the 16 still carries as much currency over there as it ever has, perhaps more so. Throughout the 2010s, the 16 has become something of a fad in the British Isles. The love that the 16 still gets overseas is a small part of what keeps it alive stateside. That and a rabid fanbase who simply can’t walk away.

So why did the gauge fall off in the United States? Many lay the blame at the foot of the popularity of skeet shooting. When skeet shooting rules were formalized in 1926, four gauges were allowed: 12, 20, 28 and .410. No 16. Meanwhile, game bird numbers declined and far stricter bag numbers were enforced. Quail hunting was falling out of fashion. This meant that a far greater proportion of rounds were being used in skeet and trap (a 12-gauge-only sport) and the market responded accordingly.

This also pushed the market in another way: The top ammunition manufacturers were in constant, fierce competition to produce the best loads for winning at both skeet and trap. All the money for development was pouring into the popular competition rounds. Not only was the 16 not selling like it used to, there was also new reason to push the technology forward – it wasn’t a competition round, so the technology could safely languish as it became a niche round used by an ever-decreasing number of die-hard adherents. This lack of technological development also began to push the 16 out of the realm of reloading.

Changes were made to the 16, however, mostly for the worse. For whatever reason, the industry decided that the 16 needed to be a 12 in disguise. This meant too much kick, bad patterns and high price points.

The Resurrection of the 16 Gauge

It’s not just in Britain where the 16 is enjoying a bit of a Renaissance, however. Fox, Ithaca, L.C. Smith, and Parker all sell their double 16s handsomely on the used market. The bargains to be had with the secondhand market can be found with the Ithaca Model 37, the Remington Model 31, and the Winchester Model 12. Newer models are to be approached with caution. Often times they’re little more than a 16 barrel on a 12 stock, which misses the entire point of the 16. One attempt to reintroduce the weapon had a synthetic stock – not exactly gentlemanly.

Most 16 gauge shotguns weigh around seven pounds, but the lightest 12 gauge shotguns weigh 7.5 pounds and get heavier from there. The inertia of the gun affects the recoil felt by the shooter, so a lighter gun with the same charge will kick harder than a heavier gun. But even though the recoil of the 16 gauge would tend to be higher than a 12 gauge, the feel is about the same. This is because it is somewhat moderated by reduced loads for most bird-hunting shells. The real benefit of the lighter gun, however, becomes apparent after long hikes across fields and over fences when hunting upland birds.

Hunting With a 16 Gauge Shotgun

Birds aren’t the only thing you can hunt with a 16 gauge shotgun. Deer can also be hunted  – and without the recoil of a 12 gauge. As far as home defense goes, the 16 isn’t a slouch either. It might not be an ideal shell, but it can certainly get the job done. If you choose a 16 as a home-defense weapon, you’re going to want number 1 buckshot or one ounce slugs to protect yourself.

While the shells have a reputation for being impossible to find, this is simply not true. You can generally find 16 gauge shells online without a lot of trouble. Anyone living near a population center or a large, big box sporting goods store likewise will probably not have trouble finding 16 gauge. The reloading components are easier than ever to find.

16 ga shotgun shells enjoy another important advantage when comparing its performance to the 12 gauge. While the numbers are about the same, most loads for 16 gauge max out with 1.25 ounces of shot, and they generate a muzzle velocity slower than equivalent 12 gauge loads only by about 200 feet per second. Muzzle velocity for the 20 gauge is another 100 feet per second slower, and payload is reduced 20 percent – making it easy to understand what advantages the 16 gauge offers.

Ammunition for the 16 gauge is not always easy to find on the shelves of your average big box store, but it is available at most sporting goods stores, and of course through online retailers. Many different manufacturers in America and Europe produce a variety of different shells for the 16 gauge. The size of shot ranges from #2 to #8; and slugs can also be found.

Many hunters overlook the 16 gauge because it's not as abundant as the 12 or 20 gauge, but consider taking a second look. The cartridge is powerful and can do the work of a large gauge – with the benefit of a lighter gun. That fact alone ought to make a 16 gauge shotgun worth considering for your next purchase.