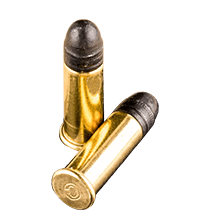 Live Inventory
The .22 Long is the next step in the progression from the .22 CB to the .22 Short. While it keeps the 29 grain bullet of the .22 Short, the .22 Long has an increased powder charge. This increases the cartridge's performance, while retaining the low recoil found in the .22 Short. Learn More
per page

The .22 Long was introduced in 1871, and was expected to be a natural progression from the .22 CB to the .22 Short and beyond. To improve the performance of the .22 Short, the case was lengthened and the powder charge boosted, while retaining the 29 grain bullet of the .22 Short. It is currently the second oldest surviving rimfire cartridge on the market.

The Evolution of the 22 Long

The oldest known ancestor of the .22 Long is a round produced by Louis Flobert, a Frenchman who embedded a lead ball inside a percussion cap. This wasn’t an accurate round, nor was it impressive by any other metric. However, this is what started the development of the entire rimfire family of ammunition to which the .22 Long and its siblings belong. By 1857, Smith & Wesson developed the .22 Short, the first metal-based cartridge produced in the United States. In fact, the .22’s short version was the first-ever rimfire cartridge on the market.

It took another 20 years for the round to be extended to the length currently known as the .22 Long. Ten years after that, the original 29 grain bullet was upgraded to 40 grain. The powder charge got beefed up to six grains at this time, which resulted in the .22 Extra Long (a thing of the past by 1935). The .22 Long Rifle round was released in 1887, by the Stevens Arm & Tool Company. Bullets today weigh between 30 and 40 grains, with 40 grains standing strong as the most common.

Today you can buy .22 Long rounds, but the caliber is largely obsolete, surpassed and replaced by the .22 Long Rifle. Many of the firearms that are equipped to fire .22 Long Rifle ammunition can also fire .22 Long ammo. But if you’ve got a semi-automatic, it probably won’t work with a .22 Long (or .22 Long Rifle) round. This is because the rounds simply do not generate enough energy for the weapon to realize that something has been fired and load the next round. The ratio of the barrel volume to the chamber means that in many cases, all .22 rounds actually slow down while in the chamber. A lower penetration and a quieter report are the two main reasons some people, mainly farmers hunting varmints, choose the .22 Long over the .22 Long Rifle.

It’s common for people to ask about the difference between these .22 rimfire rounds. While the length is the only real difference, it also affects the speed – meaning as the round gets longer, it also gets faster. All have their roots in what is now known as the .22 Short, but this round was packed with 25 percent more black powder than the Short.

Some people think that the .22 Long combines the bullet of the .22 Short, with the casing of the .22 Long Rifle. This is not true, as the .22 Long predates the .22 LR by about 16 years. The classic 1871 Great Western Gun Works catalog lists the round as being for a standard seven-shot revolver, while Remington and Stevens catalogs from only a few years later list the round as being for rifles. In fact, it can be used in both pistols and rifles, but never in semi-automatic weapons of any kind.

With a speed of about 1,040 feet per second and a muzzle energy of about 67 foot pounds – the .22 Long pales in comparison to the .22 LR, which in some cases has triple the foot pounds. While this may paint a discouraging picture, the .22 Long has been popular enough for Winchester and CCI to continue producing ammunition in sufficient amounts, also making it relatively easy to find.

The .22 Long is best used for shorter ranges – under 150 yards or less. In fact, many shooters only use these rounds for targets under 50 yards away. Of course, such figures have a subjective factor about them and the weapon that can have considerable influence over accuracy at long distances. This includes specific brand of ammunition, optics and other gear, as well as the skill of the shooter.

Despite the fact that these are not distance rounds, their relatively low cost makes them one of the perfect cartridges for plinking in your backyard. Varmints and small game can easily be put down with .22 Long ammunition. Practicing for competition is a good time to use the .22 Long, especially when you’re getting into the groove. Once you’ve gotten there, consider switching to a more expensive round you will actually use when the competition comes. At shorter distances, it’s an incredibly accurate round, making it perfect for training newbies.

Stevens Arms was founded by Joshua Stevens in Chicopee Falls, Massachusetts, in 1864. By 1902, they claimed to be the largest producer of sporting firearms in the entire world. New England Westinghouse purchased them in 1915, with Savage Arms purchasing the company in 1920. The company had a production facility in Chicopee Falls until 1960, when the parent company moved production to other facilities they owned. Savage stopped using the Stevens name in 1991, but began to use it again in 1999.

The company’s first product was a tip-up action single-shot pistol. They didn’t find success until 1870, when it purchased an actual grist mill with 60 employees. The Panic of 1873 didn’t do the company any favors, but they recovered by 1876, doubling the number of shotguns they were producing in a single year. I.H. Page bought out the original owners, W.B. Fay and James Taylor, in 1896.

This purchase led to the greatest expansion in the company’s history. There were over 900 employees by 1902, when the company was touting itself as the biggest in the world. As stated above, the company was purchased by New England Westinghouse, a company specifically created by Westinghouse Electric to manufacture 1.8 million Mosin-Nagant rifles for the Imperial Russian Army’s efforts during World War I. This proved to be the company’s undoing, as they were never paid for their efforts due to the 1917 Bolshevik Revolution. Some of the rifles were eventually sold to the United States government, but the damage was done and the company spent most of 1917 through 1920 looking for a buyer.

While the .22 Long is largely obsolete and firearms chambered specifically for this round have not been regularly produced for nearly 50 years, it’s a crucial part of the history of rimfire ammo – leading to the popular .22 LR. Some rifles shoot the .22 Short, .22 Long and .22 Long Rifle. But firearms that were made just for the .22 Long have become antiques and are solely display models or "safe queens." Because of this, the ongoing production of these historic cartridges remains questionable.

What is the difference between 22 Long ammo and 22 Long Rifle ammo?

The .22 Long predates the .22 Long Rifle (LR) by about 16 years and was the most powerful rimfire cartridge until the LR was released. The .22 LR features a heavier bullet and a more powerful charge, resulting in nearly triple the foot pound force of the .22 Long.

What is the difference between 22 Short and 22 Long?

The .22 Short was designed in 1857 as both the first U.S. metal-based cartridge and the first rimfire cartridge. The Short is the parent case to the .22 Long, which was created when the case was lengthened from .421 inch to .613 inch. With the same bullet weight, the .22 Long displays a higher velocity and more muzzle energy.

The .22 Long is a short range, small caliber bullet that can be used to hunt small game, such as rabbits and squirrels. It can also be used to shoot varmints at short ranges. While the caliber is capable of taking down larger game, it’s not recommended and in many places illegal to use the rimfire cartridge to harvest anything larger than small game.

Although many factors can influence the velocity of the .22 Long, shooters can expect a 29 grain round nose bullet to travel at about 1,038 feet per second.

Can you use 22 Long for self defense?

Most self defense experts do not recommend the .22 Long for personal protection, stating that .380 ACP, or even the 9mm, is the smallest acceptable caliber. That being said, the .22 Long is extremely accurate and can be deadly. When other options aren’t available, it can be used for self defense.