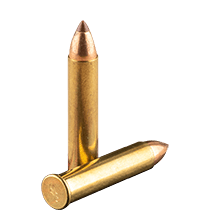 Live Inventory
A versatile round, the .22 Winchester Magnum Rimfire (WMR) can be used for varmint control, small-game hunting and even self defense. Popular for its light recoil and effectiveness, .22 WMR ammo will remain a great choice for years to come. Learn More
per page

Developed by Winchester in 1959, the .22 Winchester Magnum Rimfire (WMR) was a potent cartridge that was soon produced by Smith & Wesson and Ruger. Winchester produced their Model 61 rifle for the .22 WMR beginning in 1960, while Savage introduced its famous Model 24 – a combination rifle for .22 WMR and .410 in an over-under configuration.

At its most basic level, the 22 Winchester Magnum Rimfire is an enlarged version of the popular .22 Winchester Rimfire (WRF). Contrary to popular belief, the WMR cannot be used in weapons chambered for the 22 WRF – or any other caliber – safely. For many years, the WMR was the most powerful rimfire round in the world, outperforming even the .22 Winchester Centerfire. However, that distinction today belongs to the .17 Winchester Super Magnum. Another attractive aspect of the 22 WMR round for shooters is that it’s widely available and reasonably priced.

The 22 WMR bears the distinction of being the only rimfire round successfully introduced in the 20th Century. The bullet weight is very similar to the popular 22 Long Rifle, but this is a far faster round, shooting much flatter than the 22 LR. Indeed, the accuracy of this has been shown to be one MOA, which is remarkable. It also offers significantly improved impact at any range. At 100 yards, the 22 WMR has 50 percent more kinetic energy than the 22 Long Rifle has at the muzzle. This makes it the perfect round for short- to medium-range varmint shooting and hunting.

The .22 WMR isn’t just for rifles, though it’s most popular with single shot and repeating rifles. In fact, until the 1990s, repeating rifles were the overwhelming choice for this round. Today, Colt, North American Heritage Arms, Smith & Wesson, Taurus and Sturm Ruger are now all making revolvers capable of shooting the 22 WMR.

The Marlin Model 25MG is a bolt action shotgun designed specifically for people looking to use this round for shooting snakes and other garden varmints.

Why 22 Magnum Ammo Is So Popular

The .22 WMR is well liked and widely used because the recoil is low, the report is modest, and it devastates small game. This powerful little cartridge effectively dispatches prairie dogs, rabbits and squirrels – and is of even greater interest for self-defense applications. According to the Marshall and Sanow shooting studies based on police agency reports, the .22 WMR earned a “one shot stop” rating of 42 percent. This means that in 42 percent of all cases in which it was used, the .22 WMR was able to stop an attacker from continuing their attack. This does not compare to more powerful centerfire cartridges, but it does show that the .22 WMR is a valid self-defense round – especially for shooters who can't handle the sharper recoil of the larger personal-protection calibers.

Though not as widely available or as abundant in varieties as the .22 LR, .22 Magnum ammo can usually be found on the shelves of most ammunition retailers and comes in plenty of varieties to meet the needs of most shooters. Hollow point bullets are made for hunting, and lead and copper-plated lead are sold for target shooting. Bullets weigh between 30 and 50 grains in LRN or HP configurations, and velocities can exceed 2,200 feet per second – resulting in muzzle energies greater than 300 foot pounds.

There are some rather unusual features of the 22 WMR that are worth noting. First, the bullet noses are frequently flat because the firearms are often chambered for tubular magazines. At the very least, the noses are blunted enough to allow for proper feeding. The rounds typically have unlubricated lead and heavy copper plating with a hollow point or solid nose.

This round is worth looking at from a self-defense perspective as well. While not typically the go-to round for self defense, it is nonetheless capable in this regard. A number of very small handguns take this round, such as Ruger’s 16-ounce LCR and the Mini-Revolvers from North American Arms. The round carries approximately a quarter of the ballistic energy of more popular rounds, such as the 9mm Luger and the .45 ACP. However, for smaller people or those looking for a very small self-defense weapon, that might not matter. After all, the best weapon to carry for self defense is the one you are most comfortable with. Incapacitation is unlikely, but voluntary submission from an assailant is something that’s impossible to predict. If the 22 WMR is all you’re able to shoot, or what you’re most comfortable shooting, don’t overlook it.

The casing is also popular among wildcatters looking to make performance ammunition. Wildcatters often load the casing with pointed bullets of the kind typically seen in 22 centerfire rounds. These bullets are heavier, giving the round greater impact and stopping power at longer ranges than is available in the standard version. Wildcatters are also fond of necking the rounds down to .20, .17 or even smaller calibers. This is an attempt to increase the velocity and obtain an even flatter trajectory. An example of a modification to the 22 WMR is the Swedish 4.5x26mm MKR, which was effectively a 22 WMR necked down to 4.5-pointed bullet constructed out of cold swaged solid copper.

Developed by Swedish firm Interdynamic AB, this round was part of the “micro-caliber” craze of the 1980s that sought to decrease round sizes in order to obtain high velocity and flat trajectory. It was extremely lightweight, but was abandoned after being prototyped due to a number of concerns: Namely that the round wasn’t reliable, didn’t have enough stopping power and that the rimfire aspect was a problem.

Many saw the release of the 17 HMR in 2002 as a death knell for the 22 WMR, but this has not proved to be the case. While the 17 HMR is both faster and flatter than the 22 WMR, it simply doesn’t generate as much energy. All told, the 22 WMR has 16 more foot pounds of stopping power and can often be a more affordable alternative. For those who want to use it primarily in hunting and pest control, this difference is quite significant – especially within 125 yards.

Rifles and pistols of all action types have been chambered for the .22 Magnum, though the most common firearms produced for this cartridge are revolvers and single shot rifles. The arrival of the Kel-Tec PMR-30 pistol, however, with a magazine of 30 rounds, has caused a surge in popularity for the cartridge.

Shooters seeking a cartridge that performs well for shooting chores around the ranch and at home find success with the .22 WMR. From taking care of small game to keeping shooting skills sharp to self defense, it truly is a cartridge that will do almost anything. And since you can never have too much, it's also a bonus that finding .22 Magnum bulk ammo is rarely difficult.

What is the difference between 22 Magnum and 22 WMR?

The .22 Mag and the .22 WMR are different names for the same cartridge. WMR stands for Winchester Magnum Rimfire.

The .22 WMR has multiple functions. The rimfire round is popular among small game and varmint hunters, as it has an extremely mild recoil. It can be used to harvest prairie dogs, rabbits, and squirrels. The round has also seen some success for self defense, especially among those who like micro CCWs and pocket pistols. The .22 Mag is also a fan favorite among handloaders, as the casing is popular for wildcat rounds.

The .22 WMR and the .22 LR share a similar bullet weight, although the Long Rifle round does have a larger projectile diameter. Even so, the Magnum round has a higher velocity and a flatter trajectory. The .22 WMR also features more impact, with a 50 percent increase in kinetic energy at 100 yards compared to what the .22 LR has at the muzzle.

Who makes the best .22 WMR rifles?

The .22 WMR is most popular in single shot and repeating rifles. Rifles and carbines by Henry, Savage, and Mossberg are all favorites among .22 Mag shooters.