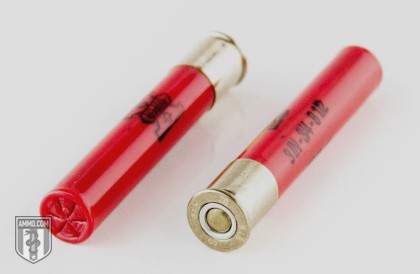 If you know your shotgun ammo, you know exactly what #8.5 lead shot is for – sporting clays or 16-yard traps. What makes this round so perfect for these types of shooting? Twice as many pellets per shot than a #6 shot and more range and power than a #9 shot. You’re looking at 500 to 600 pellets with an effective range of about 25 to 30 yards. This particular shot is dead center in the “allowed shot size” for competitive target, skeet and clay pigeon shooting.

This is primarily a competition round, and you’ll be using it at various ranges depending on what you’re shooting. You will most likely be shooting at ranges from 15 to 30 yards, so learning how your shotgun patterns at those ranges is key.

The spread of your pellets or pattern will vary, and at longer ranges should be quite a large diameter hitzone. Find that sweet spot where you’re getting a large spread, while maintaining enough pellet velocity to break your targets as they fly through the air. If you’re not getting the right amount of power for what you’re shooting, consider dropping to a #8 shot or even #7.5 shot – as these are almost always competition-approved, and give you more power in exchange for less dense pattern.

Though not used much for hunting, there are still some decent hunting applications for the #8.5. It’s similar in size to dove shot, so any small birds can be successfully brought down with this type of ammo. This depends on the skill of the shooter and what type of bird is being hunted. #8.5 shot is also a good size for snake control if you live in an area where poisonous snakes tend to be, but be aware of rocks or anything that could cause ricochet issues.

Overall, this is one of the best shot sizes around for competitive shooters of all skill levels, and can be a great way to introduce someone to shooting in general. This shotgun lead shot size can be found most commonly in 12 and 20 gauge, with 28 gauge being a bit harder to find.