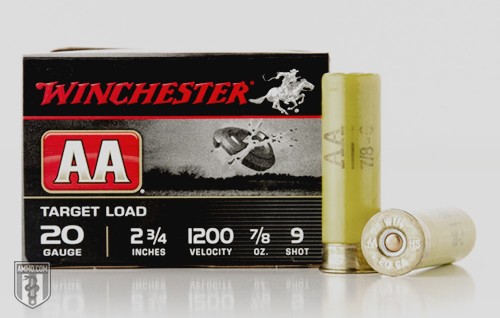 #9 lead shot is the most popular pure skeet shooting round you’re going to find. This shot has the high pellet count and range to take down skeet discs, even when launched simultaneously and at a high rate of speed – making it a popular choice for the Olympic Games (with lead being used almost exclusively).

In some regions, #9 is used as small bird or squirrel hunting ammo, but people tend to have mixed feelings about this. Hand loaders use #9 as a filler for larger pellets, such as #7.5 shot, to increase their ability to take down mid-sized birds or quick little varmints. Find this shot in 12 gauge, 20 gauge and more.

Some people confuse skeet with trap and clay shooting, which is understandable due to their similarities. The main way to help understand skeet shooting, is to visualize these three sports and know their differences:

This round has been one of the preferred and mandatory shot sizes since the late 1960s, when skeet shooting became a legitimate Olympic sporting event. You can find skeet clubs in most major cities as well as smaller cities where outdoor sports and firearms-based events are popular. It can be very thrilling to unload your #9 shot into clays, and is a great way to meet people with similar interests in firearms.

#9 is fairly well developed for breaking discs. But since it has so many pellets, it also makes for a great snake shot or small bird shot. You won’t want to shoot anything larger than maybe a pigeon from 20 yards, as it won’t have the power to kill. If your goal is ducks or garden pests, you’ll definitely want to go up to a #6 shot or maybe a #7 steel shot to make sure you take care of them the first time.