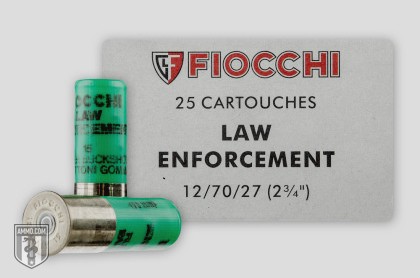 Used by police, military and security personnel for years with great effect, rubber shot pellets offer a less lethal option without sacrificing a strong response. The 1.5-inch rubber bullets were designed as an indirect fire projectile, initially used in Europe to quell riots in the 1970s.

Unfortunately, during The Troubles of the early 1970s in Northern Ireland, the bullets were used as direct fire munitions, causing many serious wounds and some deaths. This lead to the development of rubber bullets and buckshot to be used in direct fire mode, without the likelihood of causing injury as older rubber bullets. However, it must be noted that any firearm projectile has the potential to be lethal – even when loaded with rubber buckshot.

When discussing home defense and the use of rubber buckshot, people are usually very opinionated on whether they will use less lethal munitions or not. Some believe that rubber buckshot and other less lethal options are a great option to have when confronting someone in your home.

One idea is to carry one round of rubber buck in the chamber and regular buck in the magazine. This allows the shooter to simply cycle the action and switch to lethal ammunition – an option that can help avoid accidentally shooting a family member or the potentially devastating effects of shooting someone who was mistakenly in the home.

On the other side of the spectrum are those who feel that less lethal munitions are pointless for use in the home. Some feel that they may be dangerous, as if they are not deployed appropriately, the less lethal shot could actually enrage the target and cause them to attack the defender instead of fleeing. Another point is that many believe that firearms are never to be pointed at something they do not intend to destroy. This would eliminate the need for less lethal ammunition since the target would be identified as a threat before the firearm was brought into use.

Regardless of your opinion, rubber buck does offer another choice in the plethora of shotgun loads available.

Rubber shotgun rounds like #1 buck rubber are very useful among farmers and civil authorities who often need to chase off animals. It’s less damaging than rock salt and ensures you’re not going to kill the animal at long range. This is typically neighbors' dogs or the occasional rogue bull that’s too stubborn and mean to approach. It’s a good idea to use this as a last resort and only if the animal is threatening your livestock, crops, pets or family members.

Rubber buckshot can be purchased from Fiocchi, Sellier and Bellot and quite a few other manufacturers. If you decide to go with this type of ammunition, take your time and do your research. Fire some rounds at a shooting range to confirm they will function in your gun, confirm accuracy at different ranges, and take note of pattern spreads.