Looking for 0 buck ammo? See what we have in-stock: 0 Buck Ammo Search » 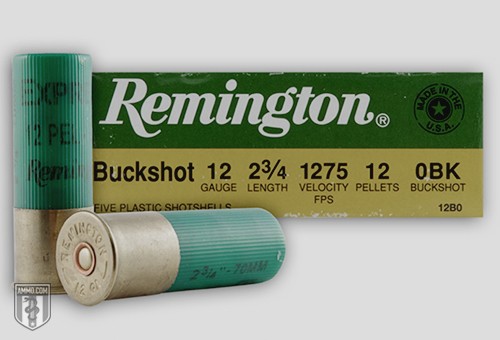 0 buck, or single-aught buck, while a little less common than its big brother 00 buck, is primarily used for hunting deer and large game – but is also popular for home defense. This ammo will give you about 10 pellets per round depending on the shell length, and an effective range of around 50 yards. The pellet is .32 inches in diameter and weighs about 48 grains, just a bit more than your average .22LR bullet. All buckshot was originally intended for hunting deer at fairly close range in wooded areas, so this is a good choice if you’re going to be in heavier brush with more obstructions. The extra pellets in 0 buck make it a decent choice over larger buckshot.

#0 buckshot can be used for home and property defense just like any buckshot, but you’ll need to keep the power in mind. This ammo can easily blow through sheet rock, wiring and even metal doors, so you’ll want to prepare for that beforehand. When comparing it to other shot sizes, 0 buck falls in between the higher shot count of #4 buck and the deeper penetration of 00 buck. The advantage over 00 buck is that 0 buck will allow for a couple more wound channels and still give good penetration. As with any home-defense ammunition, it's important to know what it will do when used indoors. Conduct penetration tests with drywall and other material to get a good idea of the power.

0 buckshot is well suited for hunting in pine forests and heavy brush, due to the weight of the pellet and the amount of pellets in the average load. Hunting with a shotgun can definitely be more rewarding than using a rifle, but it can take some getting used to if you’re just starting out. The choice of shot size is vital to your success when hunting – and 0 buck is a great choice for deer, coyote and other medium-size game and predators (it would be a poor choice for small game or any kind of bird hunting).

This ammo type is actually pretty versatile and can be used for quite a few applications, such as home defense, feeding your family or protecting livestock. When considering 0 buckshot vs. 00 buckshot, people sometimes choose 0 buck because it has more pellets than 00 buck. It’s a tradeoff for more damage-creating pellets versus fewer larger pellets.