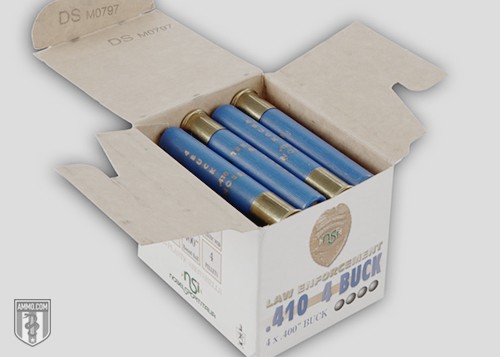 The .4” buckshot size doesn’t get as much use by shooters as it probably should. A very nice home-defense round, .4" buck is also a lot of fun to shoot on the range. Pumping a few rounds into various-sized targets is very satisfying with this ammo type because the power and penetration is just staggering.

Sometimes people will see this ammo for sale either preloaded or loose, and wonder what exactly it is. The best thing to compare it to is 000 buck, which comes in at .36” diameter pellets. The .4” is slightly bigger, and the result is one of the most devastating sizes of shotgun pellets on the market today.  The primary manufacturer of this ammo is NobleSport, a company widely known for their competition-grade shotgun ammunition.

The .4” buckshot caliber is most commonly used for home defense because the stopping power can’t be beat. This round will go through car doors, walls and other normal items found in and around a home pretty easily. It's this penetration, however, that is also the downside for this and other large diameter shotgun ammunition. Unless you’re absolutely sure of what is behind your target, there’s a high chance of causing accidental damage to property or even hurting family members due to over-penetration. Some shooters refer to these large-caliber shotgun rounds as “bachelor ammo,” because you’re not going to want to discharge it in your home with kids or other people in nearby rooms.

This ammo is well suited for home defense in that it has the ability to penetrate targets with multiple pellets and still be manageable when shot from a revolver. The Taurus Judge and Smith and Wesson Governor really shine when using ammo like the .4" buckshot. Its knockdown power, plus the extended range, make this ammo hard to beat.

Practicing on the range will definitely help to become more familiar with how this ammo performs with your specific shotgun. Even at long range, you won’t have a lot of spread, so figuring out how far you can be accurate is very necessary. The primary hunting use of this ammo would be for larger vermin and small predators. And as with any shotgun, whether it be 12 gauge or .410 bore, you have to know your weapon and how the particular load patterns before using it for hunting.

Overall, this ammo is very powerful and can be one of the most effective loads for personal defense on the market today. Add its ability to dispatch vermin and smaller predators, and you have a cartridge that is hard to beat.