Looking for #1 buckshot ammo? See what we have in-stock: #1 Buckshot Ammo Search » 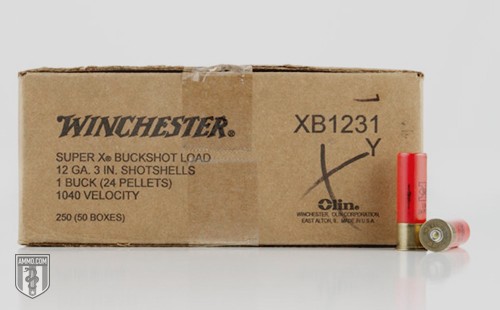 When it comes to shotgun ammunition, there are plenty of choices. And while most shooters are very familiar with certain types, like the 00 buck, each bullet size and pellet count is different.

The size of the buckshot bullets, or “shot,” will decrease as the shot type number increases – with buckshot for larger game and bird shot for smaller game. This means 000 buck is very large compared to #12 bird shot – with #1 buck right in the middle.

As the name implies, #1 buck can be used for hunting deer and other game of all sizes at short to medium range – though it may be less effective than the larger 00 buck. If shooting in an area filled with small brush and thickets, the dispersion and rapid energy transfer of #1 buck can be more desirable than even a .30-06, unless the range is extreme.

There is some debate about the best shotgun ammunition for home defense, but #1 buck has a lot to offer those who choose a shotgun for this application – and Federal #1 buckshot is a popular choice. The biggest advantage is a combination of penetration and contact area. If 00 buck will shoot through six pieces of drywall and you live in a crowded apartment building, you could cause serious property damage and potential injuries. For a lethal round that's less penetrative, the #1 buck will go through less drywall and have more pellets in the shot than the 00. When comparing #1 buckshot vs. 00, there are almost twice as many pellets in a #1 buck load compared to the 00 buck – leading to more wound channels and a greater likelihood of multiple system trauma, which is a known fight stopper.

Your shotgun itself is a huge factor in both of these applications, so it's important to try various types of shot at various measured distances at a shooting range. You might be surprised by the cohesiveness of the pellets if you’ve never used a shotgun before, as it's a popular misconception that the pellets burst out immediately like milk out of a straw. However, this is not how shotgun shells are designed to work. Instead, the pellets are held in a shot cup that keeps them from spreading until about five to seven yards.

For home defense, take a look around your home and adjust your shot (and even your shotgun) for those specific conditions. While shorter-barreled shotguns can help the pattern open quicker, the real advantage is in the lighter weight and faster handling that the shorter barrel provides. Many authorities on home defense agree that measuring the longest possible shot you will have in a home defense situation and using that as a starting point for patterning your shotgun is the best approach, as the results in different buckshot sizes and brands can be surprising.

#1 buck is a great compromise load that doesn't give up too much of anything on 00 or #4 buck. Whether loaded for hunting or carried in your home defense gun, #1 buck has good penetration and an even better punch.