Looking for 00 Buck ammo? See what we have in-stock: 00 Buck Ammo Search » 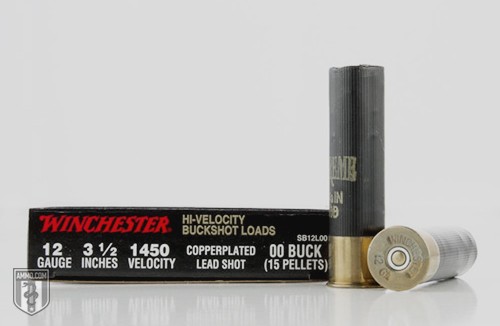 00 buck, or double-aught buckshot (commonly mistaken as double ought buck), is probably the most famous type of shotgun ammo of all time. Even people unfamiliar with firearms know of it from movies and television. This ammo type, as the name implies, is for hunting deer and large game. In terms of 00 buckshot size, they are .330 inch in diameter and are the most commonly used size.

Due to the stopping power it offers, it's also one of the most widely used types of buckshot ammunition for home defense. 00 shot sends nine large caliber pellets flying at over 1,300 feet per second, and is powerful enough to go through car doors, metal panels and whatever else you may be shooting.

With so many buckshot types, it's good to have these shotgun shells explained. Here's a breakdown:

So what is buckshot used for? 00 buck is used to hunt deer, moose, caribou and any large game. The preferred range for shotgun hunting is usually 50 yards or less, but a well-patterned weapon can go further. The penetration makes it superb for areas with light brush that don’t suit your normal rifle ammo very well. Stick to large game and targets with most buck shot ammo, as shooting birds or smaller animals is not likely to be very effective due to the low pellet count. For small game and birds, your best bet would be a #6 or smaller shot size.

Self defense has been one of the primary uses for 00 buck since it was loaded into shotgun shells. The stopping power and penetration are superior to all the other buckshot sizes on the market. Today, low recoil and coated shot make 00 buck a great choice for home defense. The key to the effectiveness of this load is multiple projectiles – even though an individual pellet doesn't carry a great deal of energy, when all nine pellets strike the target, a massive wound channel is created. This wound channel is what creates the shock needed to stop an attacker.

A great thing about 00 buckshot ammo is it’s carried almost universally in gun shops, both physical and online. It's also available from most manufacturers, including NobelSport and RIO Royal. Compared to #4 buck or other lesser-known types, it’s very easy to get your hands on – and it's common to go on sale (especially bulk 00 buckshot). You simply can’t go wrong with 00, it’s most often found in 12 gauge 00 buckshot, but can be found in others as well.