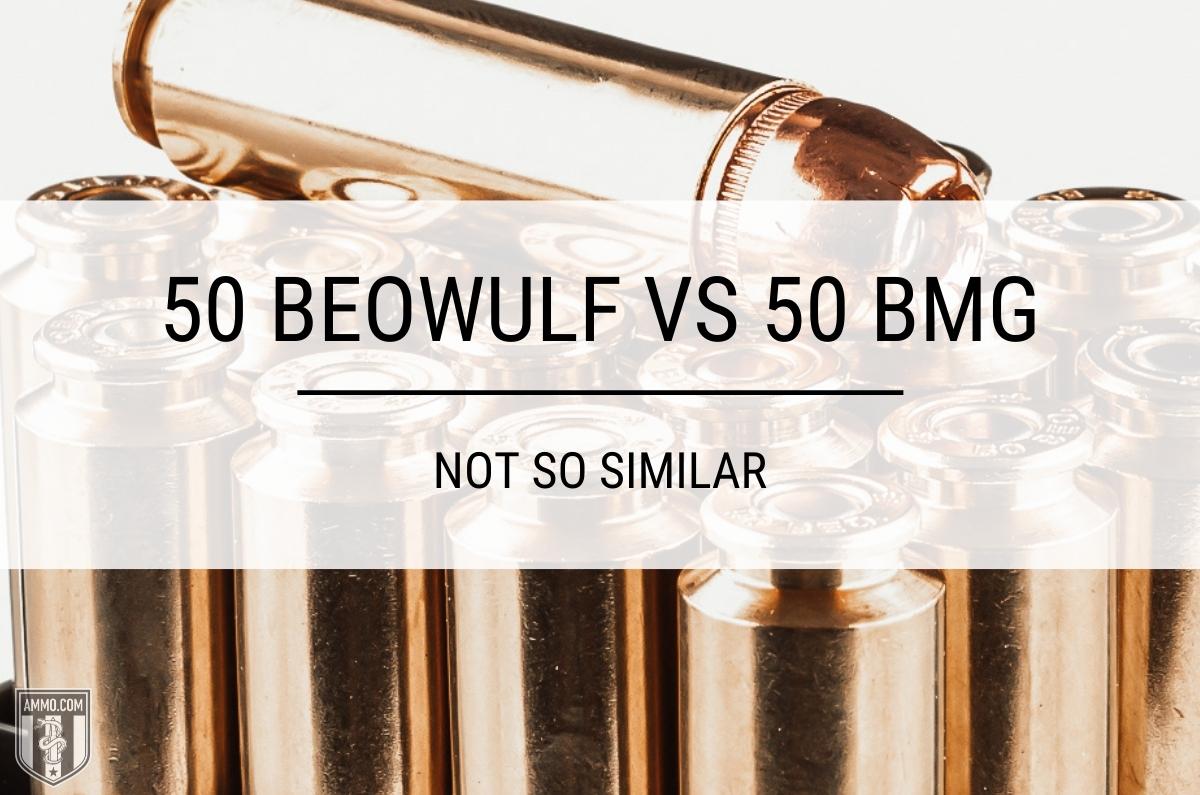 It's easy to see why someone would want to compare the 50 Beowulf vs 50 BMG, judging by the fact they both have "50" in their name.

That's about the only similarities these calibers have in common. The differences are apparent once you see the rounds side-by-side. There's no denying they were created for very different purposes.

By the end of this article, you'll understand the differences and minor similarities between these two rounds.

And as a bonus, there are no snobby firearm know-it-alls to make you feel dumb for asking simple questions, like "how big is a 50 caliber bullet".

The 50 Beowulf was created as an alternative big-bore round for the AR-15 because though the 5.56 is an excellent caliber; it does not have the kinetic energy of the 50 Beowulf.

The 50 Browning Machine Gun (BMG) was created for the military as an armor-piercing round capable of disabling vehicles and aircraft from long range.

The 50 Beowulf maximum overall length is 2.25". The straight-walled case makes up 1.65" of the overall case length.

It has a rebated rim design, meaning its rim is narrower than its cartridge base. The 50 Beowulf has a rim diameter of 0.447". 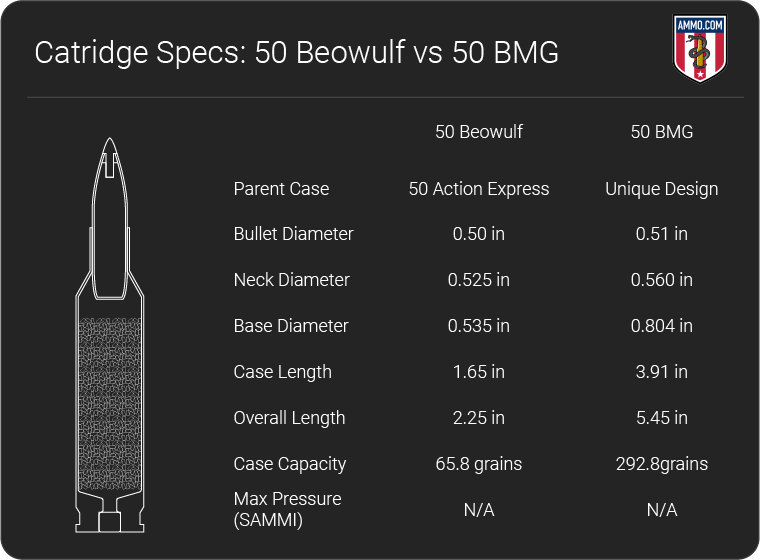 "50 Beowulf" is trademarked by Alexander Arms, so to avoid trademark litigation, ammo manufacturers use its metric designation, 12.7x42mm.

Lastly, it is not a SAAMI-certified cartridge.

The bullet diameter is only slightly larger at 0.51". A standard .50 BMG cartridge fires a full metal jacket (FMJ) bullet weighing 647 grain, nearly double some of the 50 Beowulf bullets.

When these rounds are lying next to one another, there's no way you'll mix them up due to the differences in size.

Neither of these rounds is known for its light recoil. In fact, it's quite the opposite.

The 50 Beowulf is known as a thumper round because it's a hard-hitting round with a lot of felt recoil.

Felt recoil is dependent on the shooter, shooting position, stance, and firearm. However, free recoil provides a general idea of how hard a round kicks.

Free recoil depends on bullet weight, rifle weight, muzzle velocity, and powder charge. So we can't compare the recoil of these rounds apples for apples. There is a clear winner of which one has the least amount of recoil. 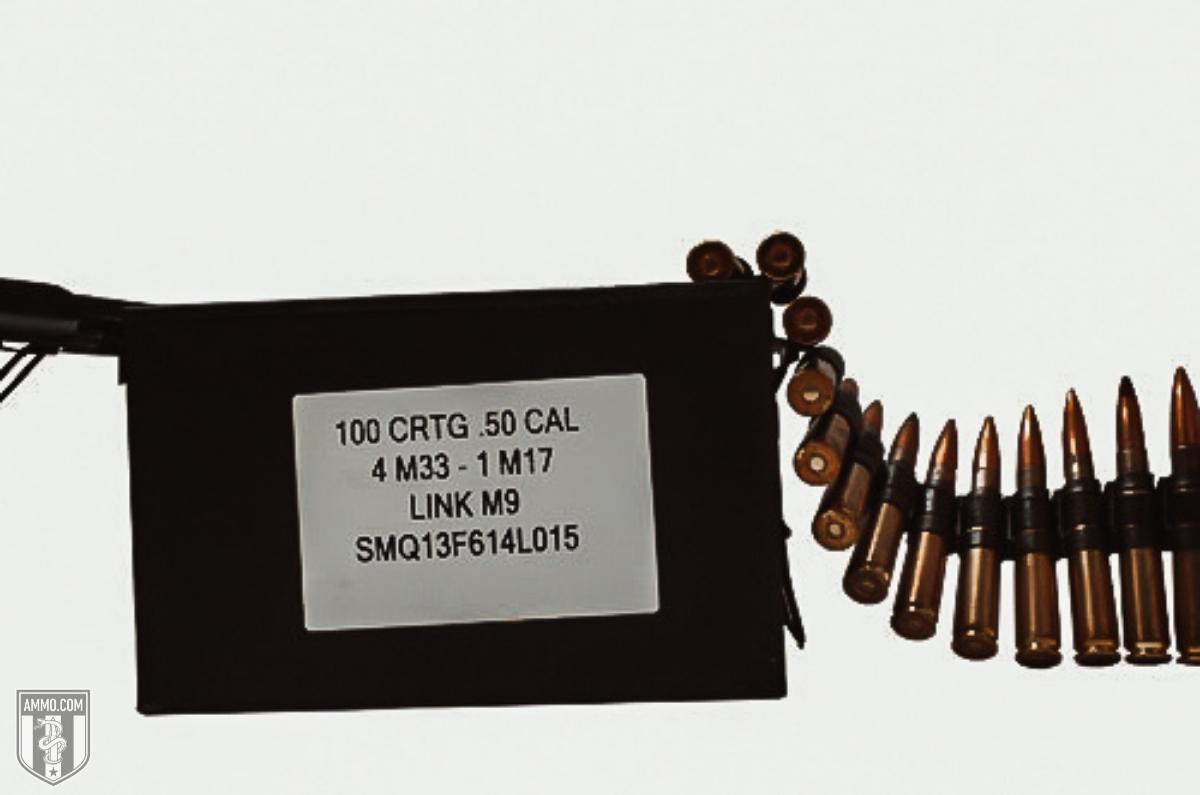 50 Beowulf cartridges have much less recoil of 29-32 ft-lbs than the .50 Browning, which has around 97 foot-pounds despite the heavier guns of the 50 BMG.

So if recoil is your only concern, the 50 Beowulf round is the only way to go.

It's affected by many different things, including bullet weight, shape, and the amount of powder in the case.

The trajectory of the 50 BMG dwarfs the 50 Beowulf trajectory.

The 50 Beowulf has a maximum effective range of 150 yards. After this distance, the round becomes subsonic and begins to drop quickly.

The 50 BMG has no problem accurately reaching 1,000 yards for competitive uses.

It can effectively take out a human target at a mile or more for military use.

Even though the 50 Beowulf is a lighter round, the amount of powder and shape of the 50 cal bullet makes it a much flatter shooting round.

The winner of the trajectory category is the 50 BMG. 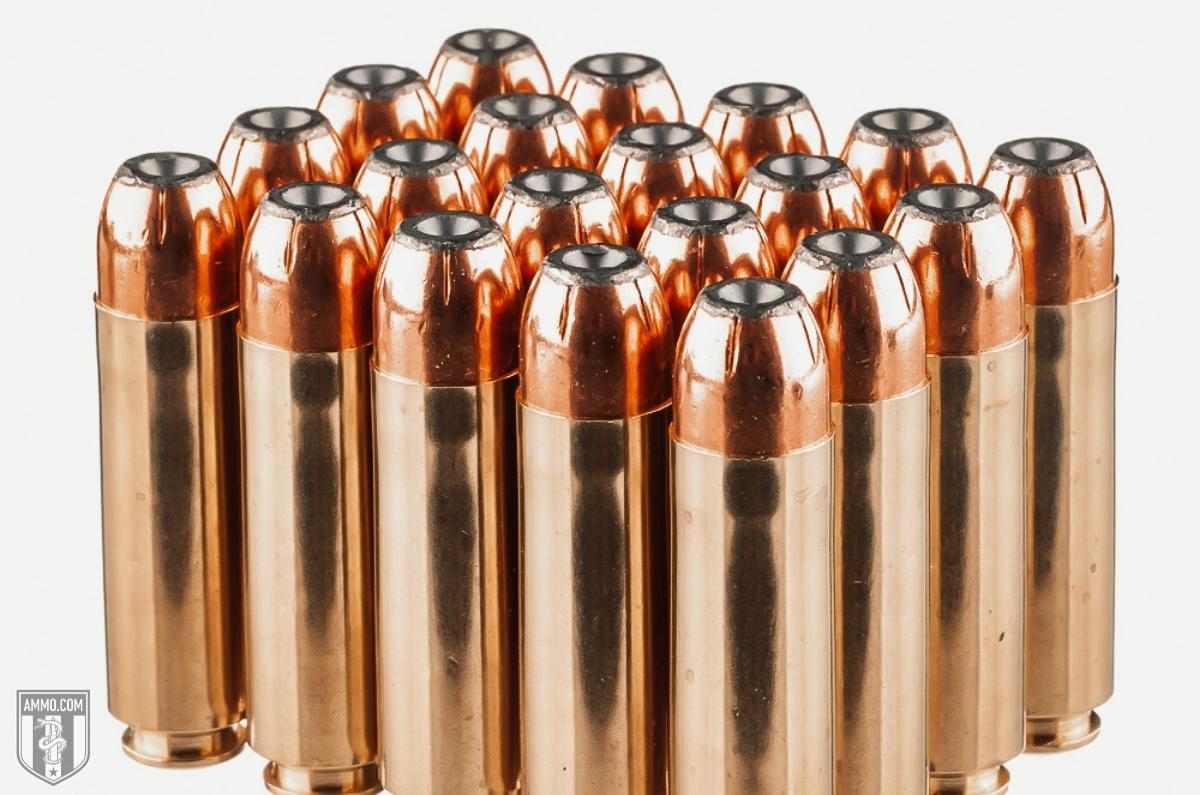 Neither round was designed to be a tack driver. However, the 50 BMG is more accurate at farther distances due to its flatter trajectory.

The top competitive shooters can get 6" groups at 1,000 yards, which is incredible.

When we discuss distances of 150 yds or closer, then the 50 Beowulf is capable of being more accurate for the average shooter because of the reduced recoil.

It's easier for the typical person to be more accurate with the 50 Beowulf; however, it lacks the power to be accurate at longer distances.

The winner is the 50 BMG at farther distances and the 50 Beowulf at distances under 150 yards.

The ballistic coefficient (BC) measures the aerodynamics of a bullet and how well it will resist wind drift.

A higher BC is better than a lower BC. Usually, longer and heavier bullets have a higher BC because they resist wind drift more efficiently. 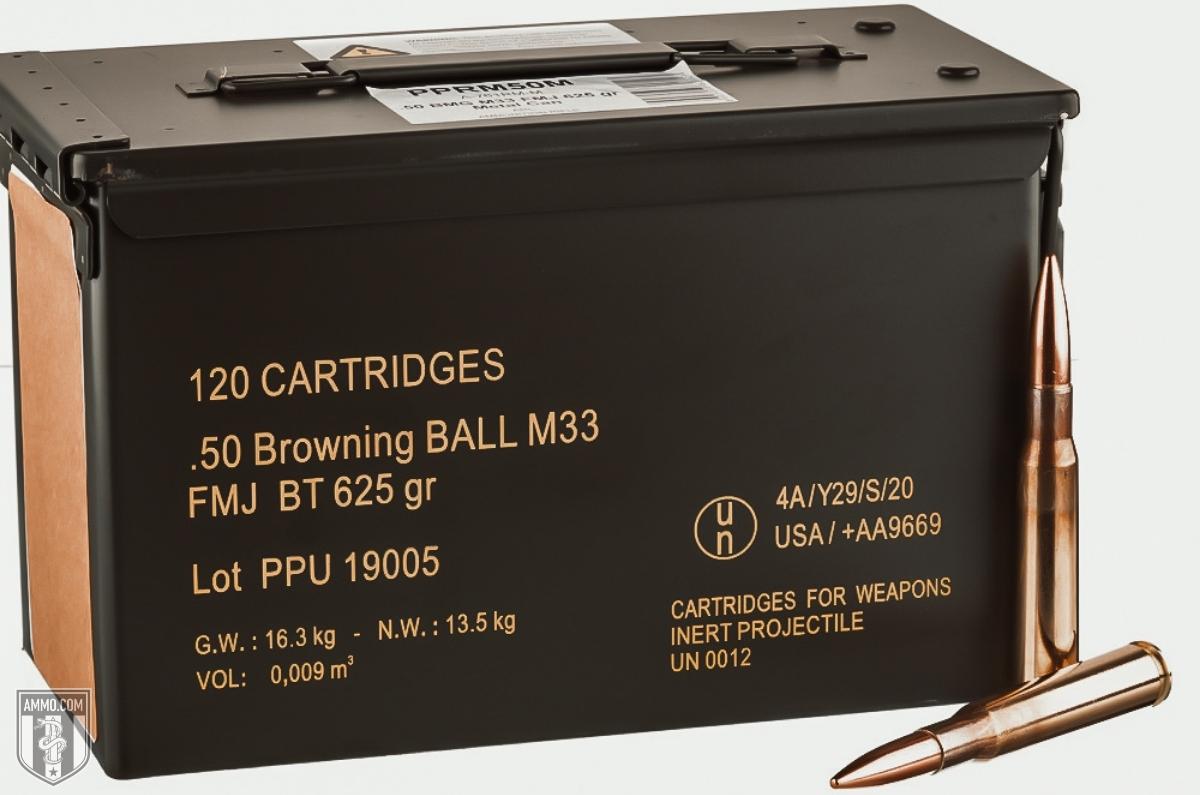 The 50 Beowulf has a low BC of 0.15 because it has a short thick bullet due to the design restrictions of the AR platform.

The ballistic coefficient of the Barrett 50 BMG bullet is 0.64. The bullet length, shape, and weight all positively contribute to a much higher BC than the 50 Beowulf bullet.

The 50 BMG is the winner of this section.

Sectional density (SD) is a way to evaluate the penetration ability of a bullet based on its external dimensions, design, and weight.

Penetration is one way to measure stopping power; another is how big of a hole the bullet leaves—the bigger the hole, the more damage.

While I understand where they're coming from, I only agree to a point because a well-placed shot isn't always possible, especially for average shooters.

Stopping power is important because a poorly placed shot from a more powerful caliber can be just as effective as a well-placed shot of a lesser caliber. 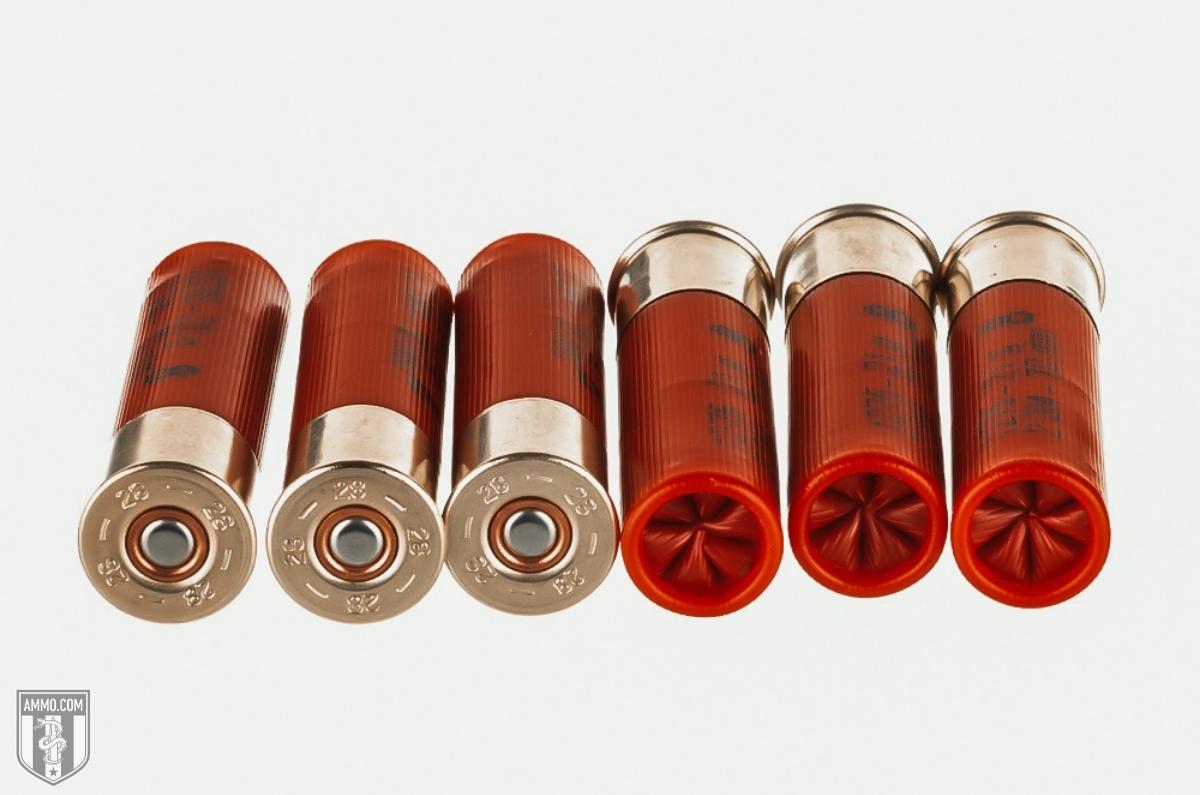 Though the 50 Beowulf can disable a vehicle from 200 yds away, a 50 BMG can take out aircraft, vehicles, and boats from a mile away.

I think it's pretty clear by looking at the rounds that the 50 BMG has much more stopping power than the 50 Beowulf.

When it comes to hunting, bigger is typically better. However, there is such a thing as overkill.

The 50 Beowulf is an excellent deer and hog hunting round out to 150 yards. The straight-walled cartridge meets the deer hunting regulations of several states.

It can ethically harvest an elk out to 100 yds, but it quickly loses its velocity and kinetic energy down range.

The 50 BMG has the opposite problem. If you were to use it for hunting, the meat wouldn't be any good after the shot, which would be a waste of delicious venison and elk meat.

Even for elephant hunting, the 50 BMG is too large.

Though it's limited in its hunting abilities, the 50 Beowulf wins this category because it doesn't ruin the meat we as hunters are after.

50 Beowulf vs 50 BMG for Home Defense 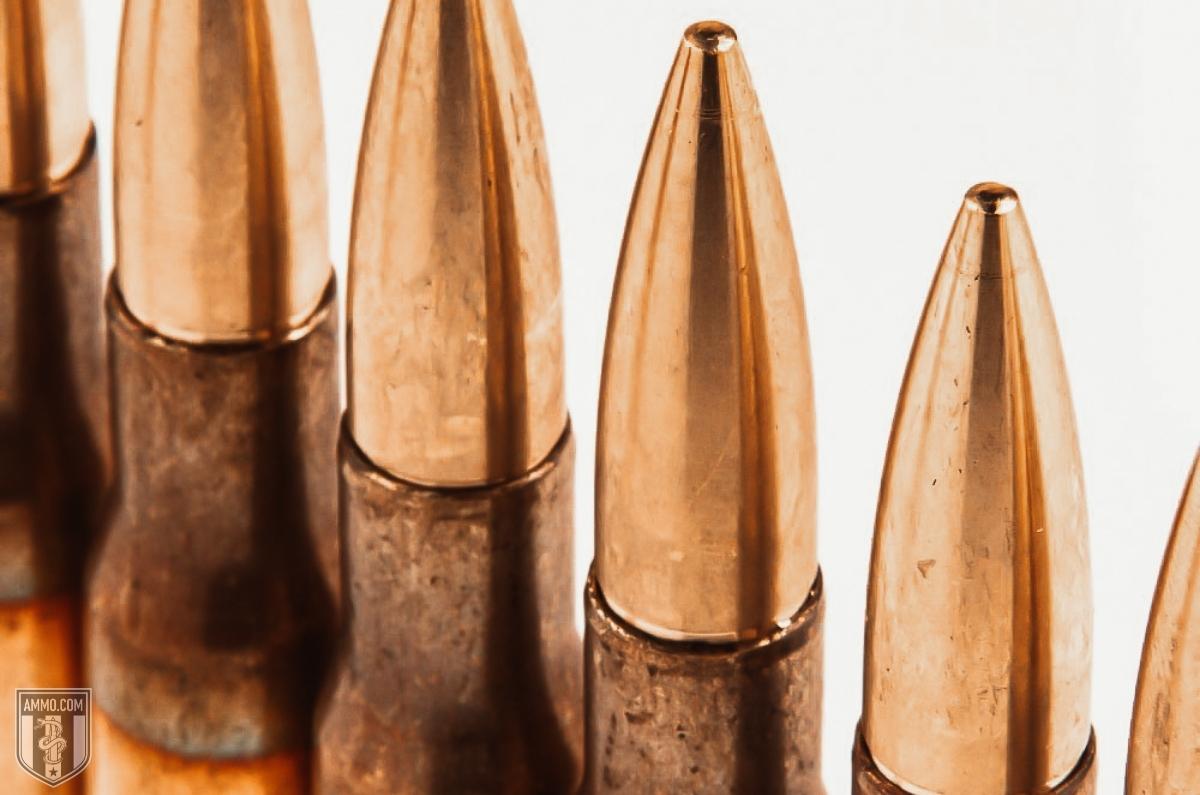 I'm all for knockdown power for self-defense and home defense situations. However, the 50 BMG is once again overkill.

I prefer a pistol, either a 9mm or 45 ACP, as a concealed carry firearm for self-defense. Rifles are virtually impossible to conceal, making them a poor self-defense choice.

I also argue they're a less than desirable choice for home defense because the bullets from a rifle can over-penetrate walls, putting your family and neighbors at risk.

I think a 12ga or 20ga shotgun is a better home defense weapon because you don't have to be as precise to be effective, and you don't have to worry about shooting through the walls of your house and hurting an innocent bystander.

With that said, if all I had were a 50 Beowulf or 50 BMG to protect my family and home, I would use it.

Between these two rounds, I would choose the 50 Beowulf because the gun is much more manageable, it will penetrate fewer walls, and you can have more ammo on in the magazine, depending on the state where you live.

The 50 Beowulf wins this section, but only by a narrow margin.

Regarding the availability of ammo, these rounds are surprisingly similar. Ammo is reasonably available considering the times. 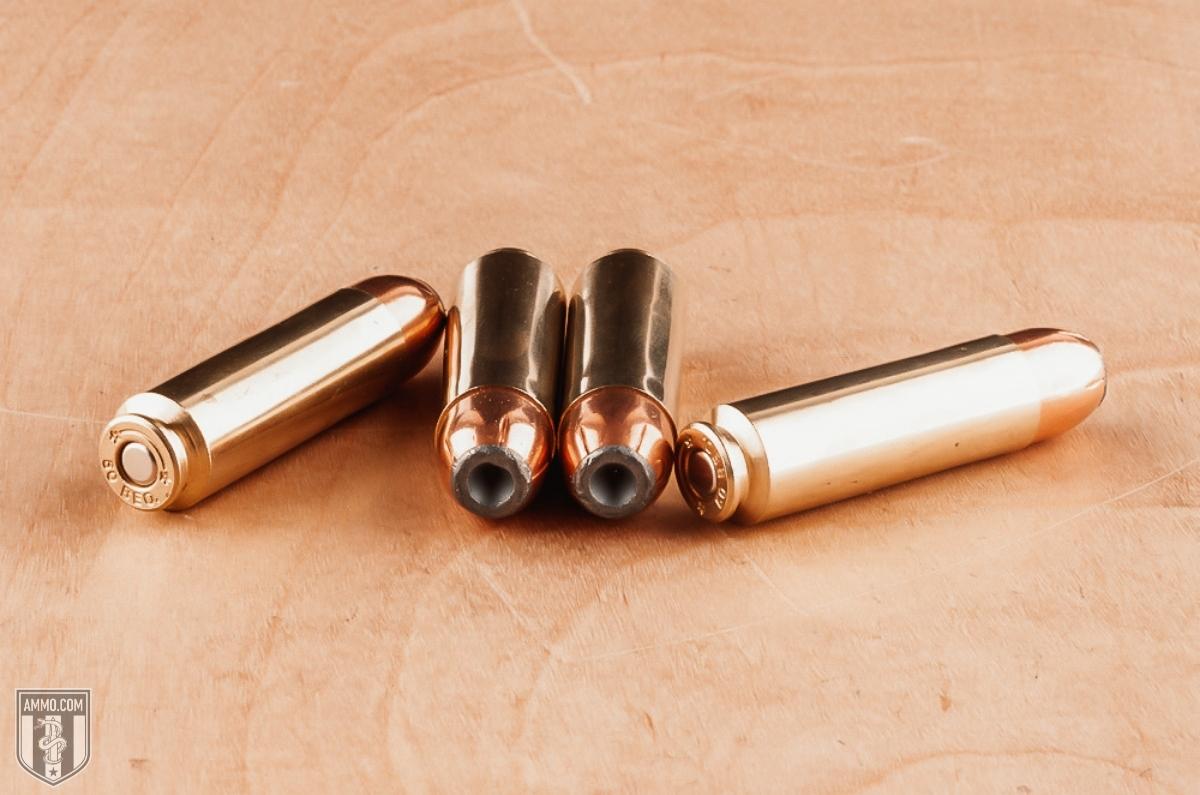 I wouldn't consider either round cheap, but the 50 Beowulf is much cheaper than the 50 BMG.

An inexpensive box of 50 Beowulf will cost $1.65 per round, while the more expensive ammunition will cost $3.30+ per round.

Unless you've got a trust fund to dip into, the 50 Beowulf is the way to go because it has cheaper ammunition.

The guns themselves are not cheap either.

You substantially lower the cost of a 50 Beowulf if you already have an AR lower. A new 50 Beowulf upper and bolt assembly will cost about $500. However, a new Alexander Arms semi-auto 50 Beowulf complete AR will cost $2,400.

Same as the ammo, the price of 50 BMG firearms begins where the 50 Beowulf left off. An EDM Arms single-shot receiver will cost about $2,400.

Or, if you want one of the top of the line sniper rifles, check out the Accuracy International AW50 for $12,750 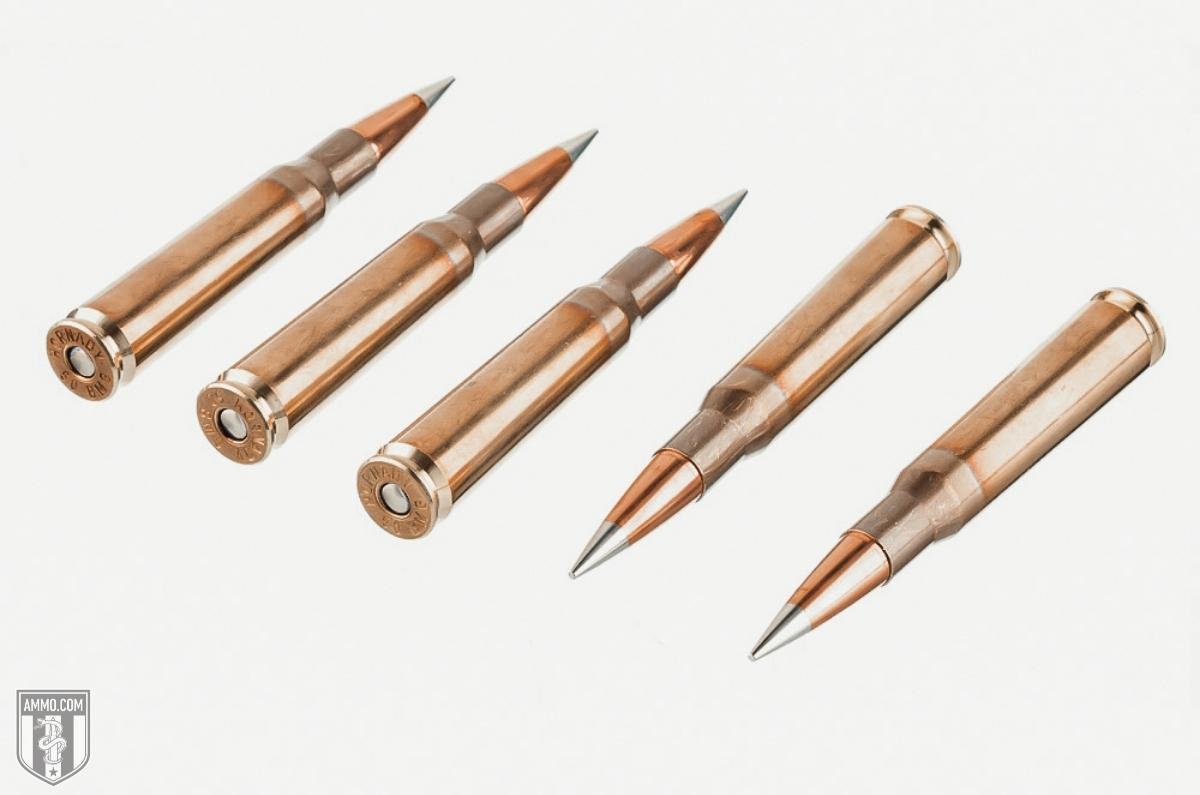 Clearly, you can spend as much as you'd like on a new rifle, but if you're on a tight budget like most of us, the 50 Beowulf is the way to go.

Reloading the 50 BMG vs 50 Beowulf

Whether you're competition shooting, hunting, or target shooting, one of the best ways to save money on ammo is to reload.

You can load up the ammo can with spent brass and reuse it a few times, plus you can get powder and bullets discounted when you buy them in bulk.

Reloading takes a lot of time but can be well worth the investment because you save money and have more control over the ammo-making process, which will lead to more accurate and consistent rounds.

Both rounds can and are often hand-loaded. The necessary reloading information is readily available for both calibers and the equipment.

This category is a tie because both rounds can be reloaded, and the equipment is readily available.

The ballistics between the 50 BMG and the 50 Beowulf is drastically different. Check them out below to see for yourself. 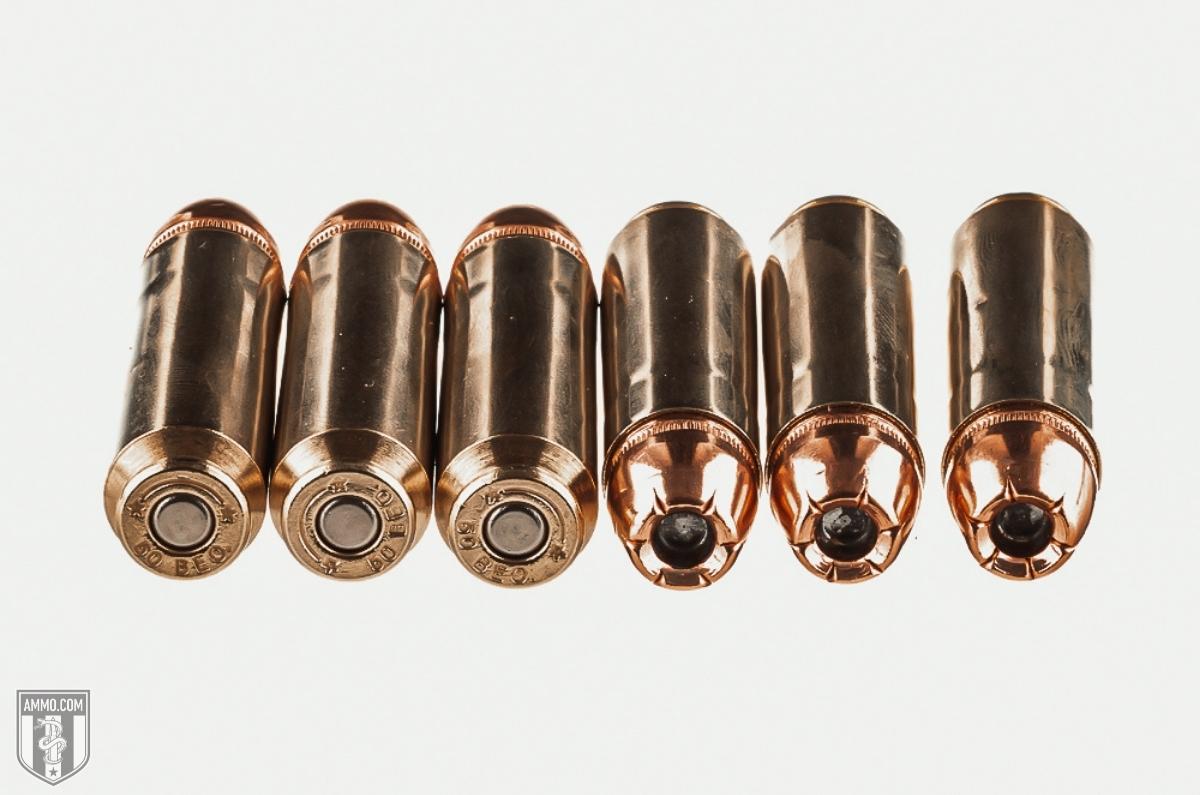 Note: This information comes from the manufacturer and is for informational purposes only. The actual ballistics obtained with your firearm can vary considerably from the advertised ballistics.

Also, ballistics can vary from lot to lot with the same brand and type load.

Note: This information comes from the manufacturer and is for informational purposes only. The actual ballistics obtained with your firearm can vary considerably from the advertised ballistics.

Also, ballistics can vary from lot to lot with the same brand and type load.

History of the 50 Beowulf 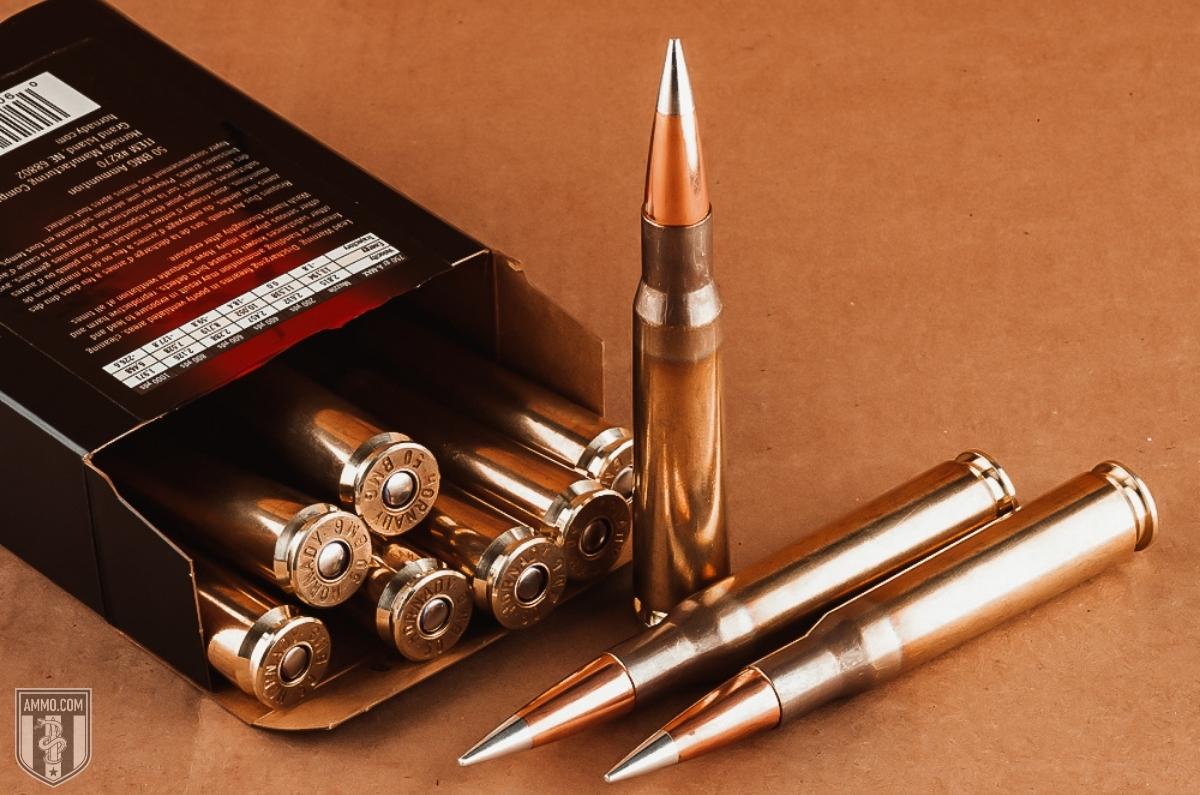 The development of the 50 Beowulf isn't well known because Bill Alexander, the owner of Alexander Arms, prefers to keep company matters private.

Here's what is known about the semi-automatic rifle cartridge.

The 50 Beowulf was developed from the same parent cartridge as the 458 SOCOM, the 50 Action Express, which is the primary chambering of the Desert Eagle.

The 50 Beowulf is a lengthened version of the 50 AE handgun cartridge. It was released to the public in 2001 as a harder-hitting alternative to the 5.56 and is now primarily used by deer and hog hunters.

History of the 50 BMG

The development of the 50 BMG goes back many more years, and it is much more well known than the 50 Beowulf.

The idea for the .50 Browning came to the US Army during World War I and was inspired by Germany's Mauser 13.2mm TuF.

The round gets its name from John Moses Browning, tasked by the Army with making a machine gun capable of firing these destructive devices.

The Army then went to Winchester Arms for the ammunition. Winchester recruited Frankfort Arsenal and scaled up the .30-06 casing, and loaded it to the max.

The gun and caliber have been mounted on helicopters, boats, tanks, and more. 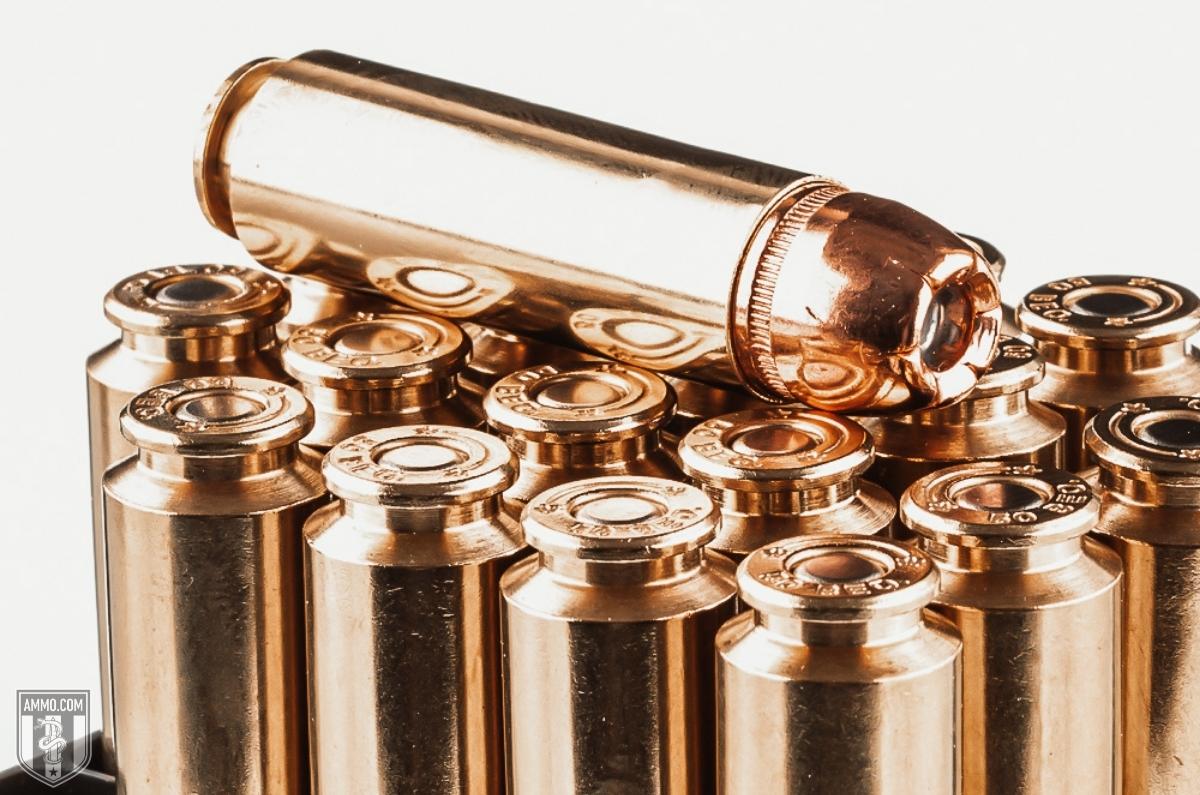 It's primarily used by the military, with a few law enforcement agencies using sniper rifles chambered in 50 BMG.

Long-range shooting enthusiasts also use it for competitions and target shooting.

These two cartridges are as different as they come, yet both have their place.

For the general public, the 50 Beowulf will be the better purchase because it can be used for hunting, has less recoil, and is much less expensive to shoot.

However, if you're a long-range shooter, then the 50 BMG is what you need since it has a flatter trajectory and incredible long-range capabilities.

When comparing the 50 Beowulf vs 50 BMG, it comes down to your intended purposes because these rounds are not as similar as their names suggest.